There is a magical quality about encountering Balderbrae for the first time, a country house in Upstate New York. While it may appear to have been firmly rooted into the landscape long ago, the house is actually the late 20th century masterwork of designer David Easton who discovered the abandoned property with accompanying cottage in the 1980s. Originally belonging to garden designer and writer Louise Beebe Wilder (1878-1938), Easton added the main house in the vernacular style of the Hudson Valley with a few French provincial notes and placed it across from the restored cottage. Both open inward towards a central space with a stone terrace, flower garden and small pool. The sides of the “square” are bracketed with a pair of symmetrical loggias projecting from the main house.

After a series of subsequent owners, our clients found the house and wanted to revive its spirit, honoring both Easton’s and Wilder’s legacies. It is now a special place for them, their children and grandchildren.  The house and gardens form a perfect setting for weekends in the country with discreet and separate spaces to read, paint, garden, cook and dine. 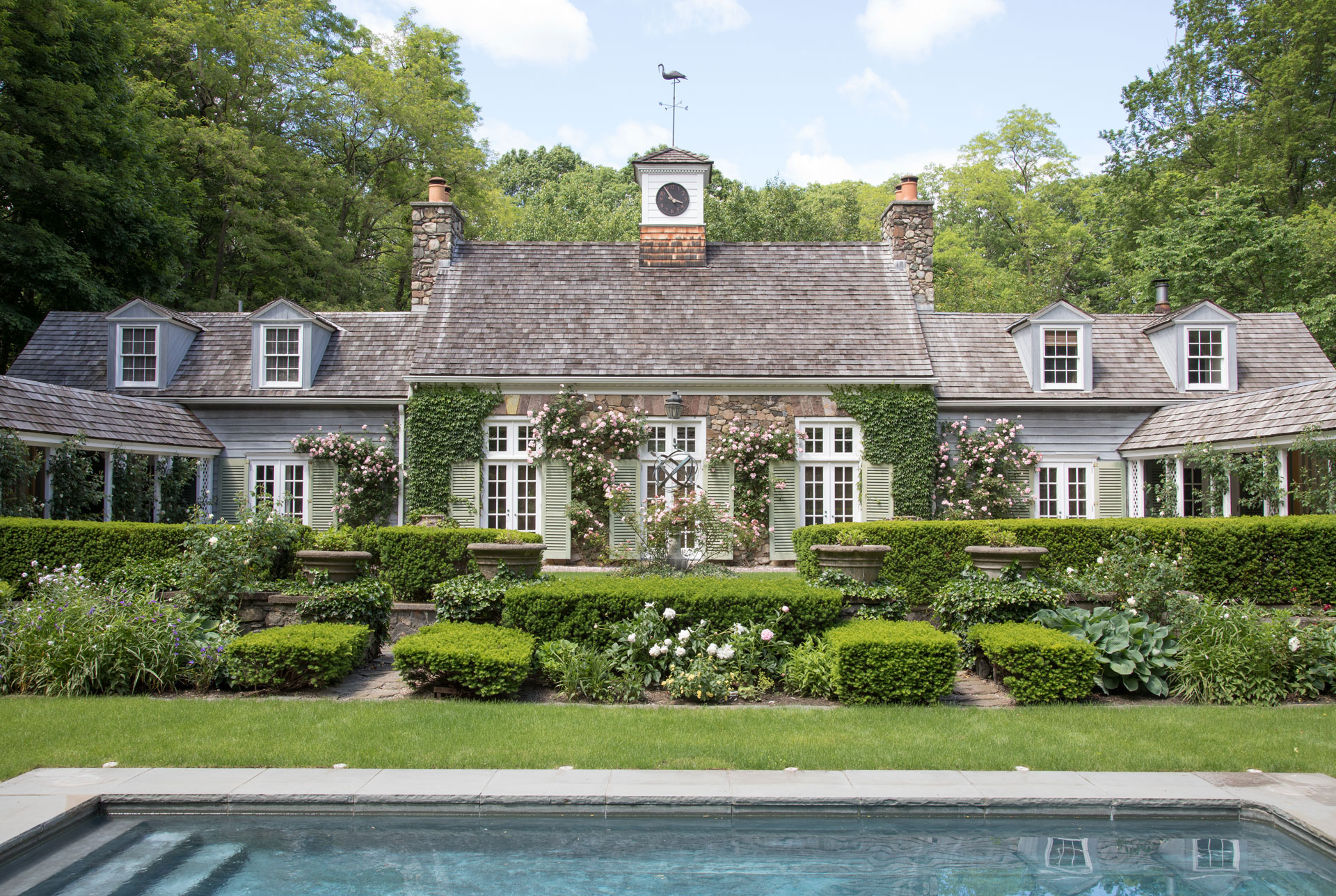 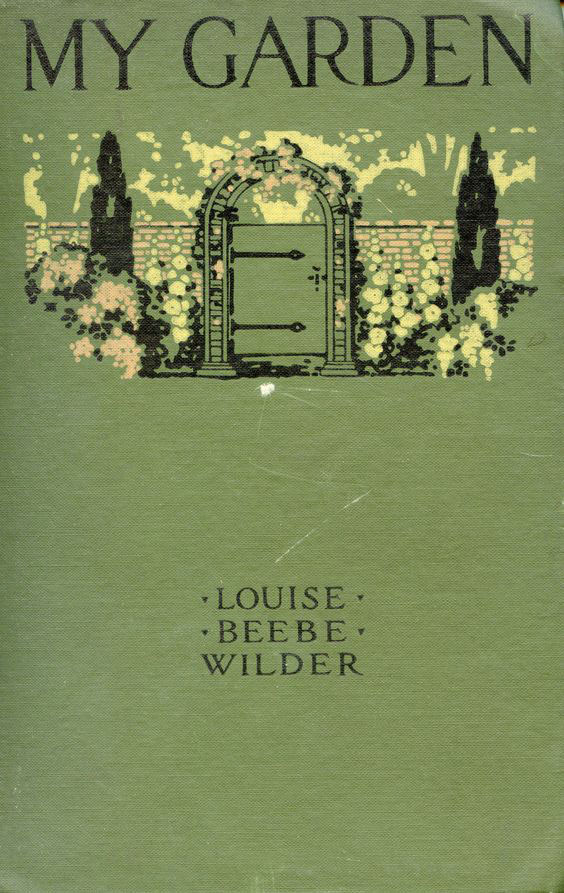 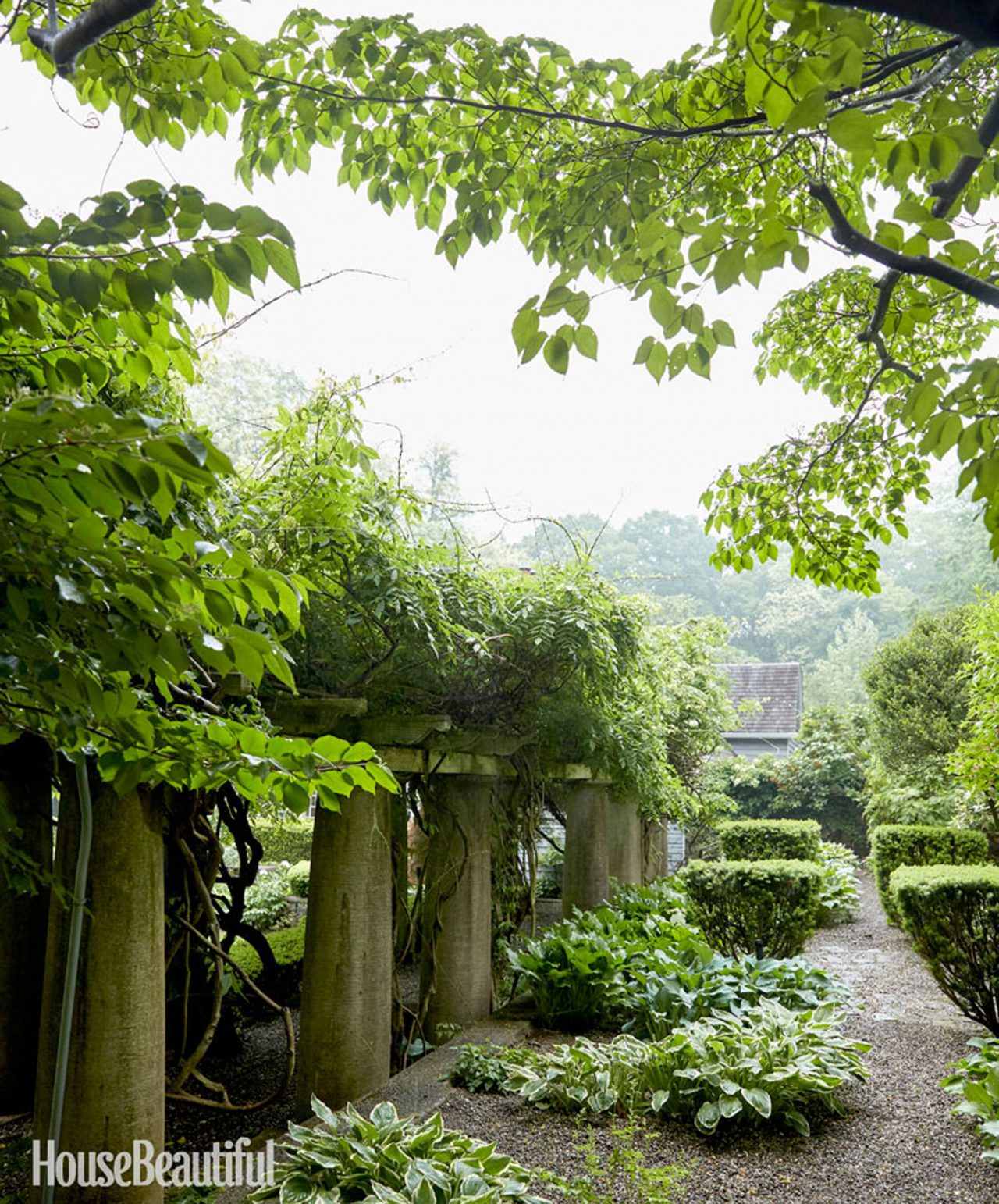 The gardens and original cottage were built by the noted garden designer and author, Louise Beebe Wilder (1878-1938), whose books are considered classics of the era. 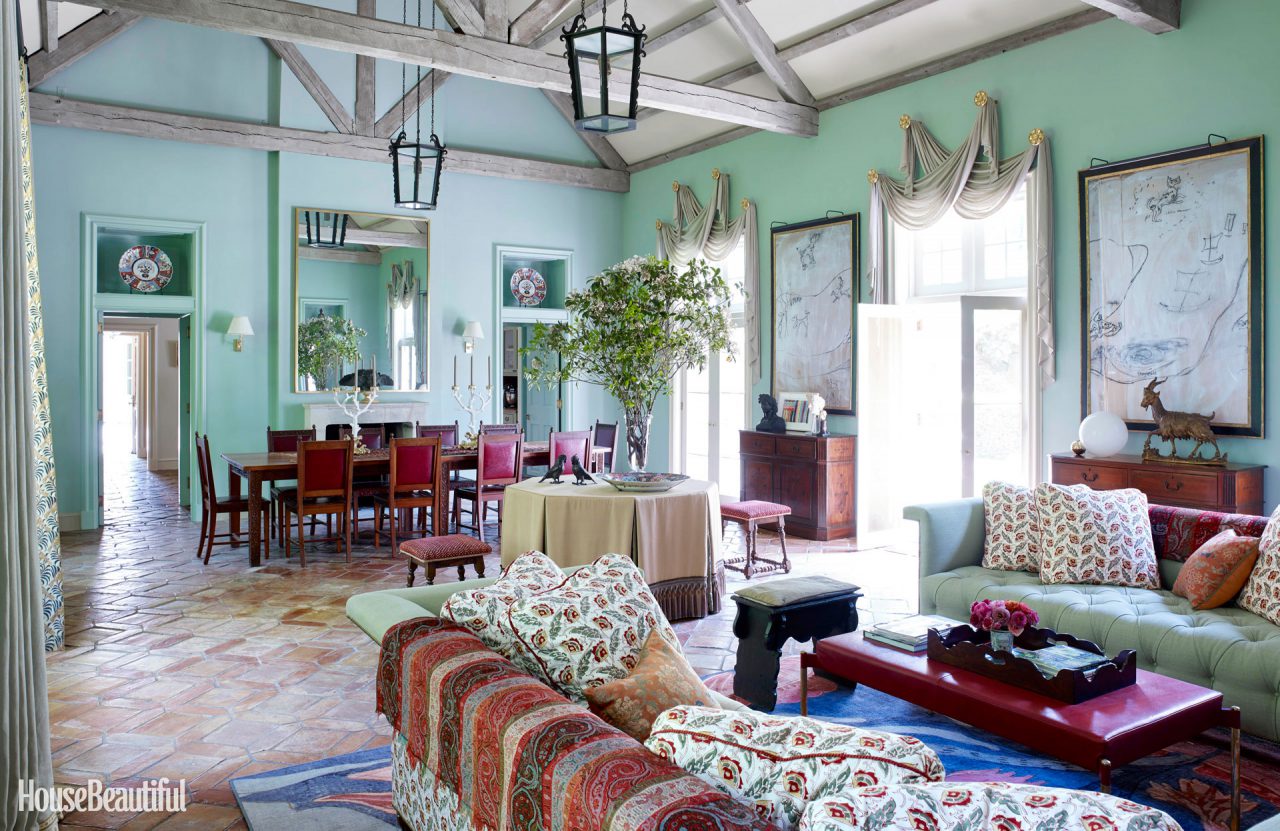 For the French doors and windows, we designed pelmets of swags and jabots and made them of sheer linen. The inspiration for these came from an early 19th century watercolor in the collection of the Cooper Hewitt. 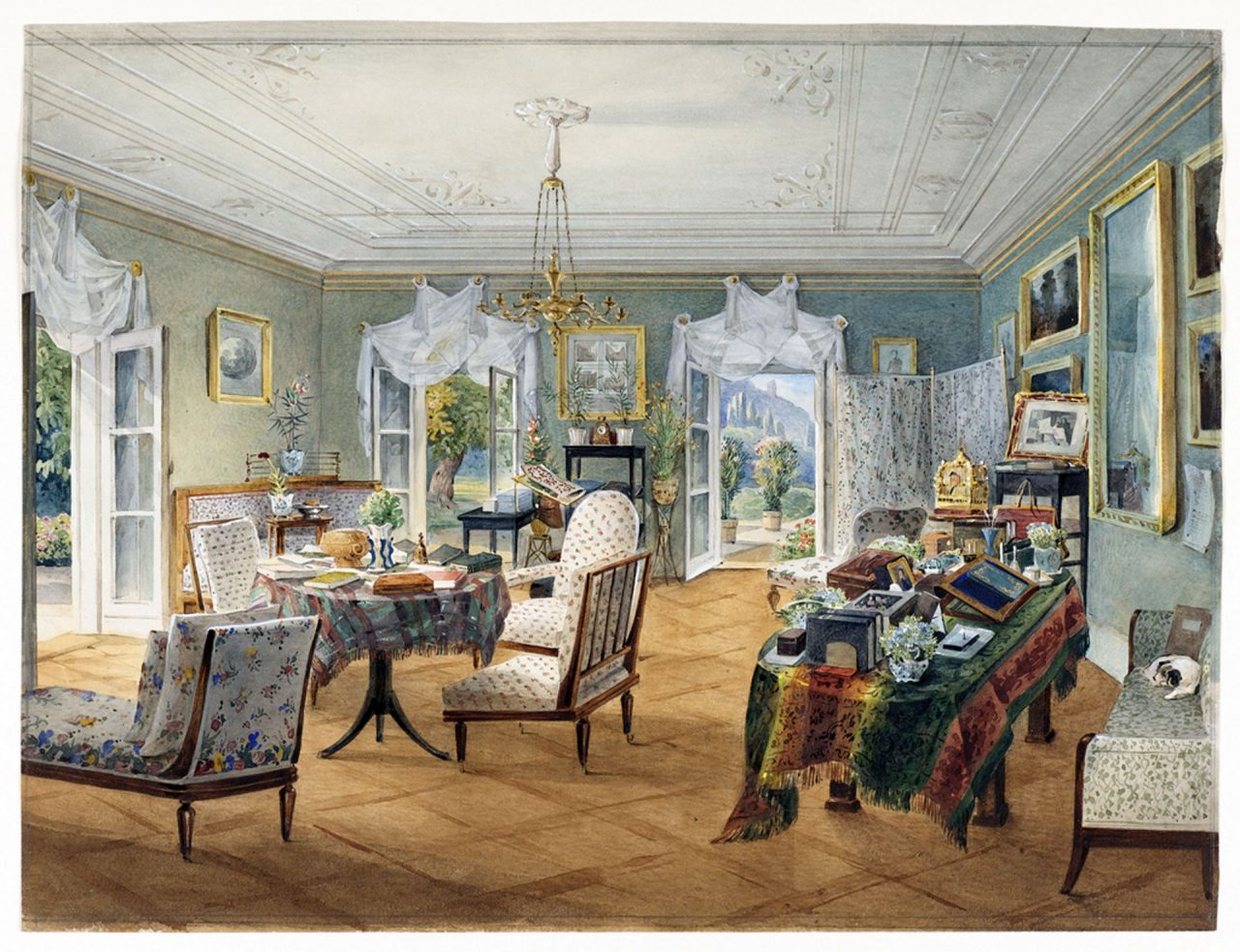 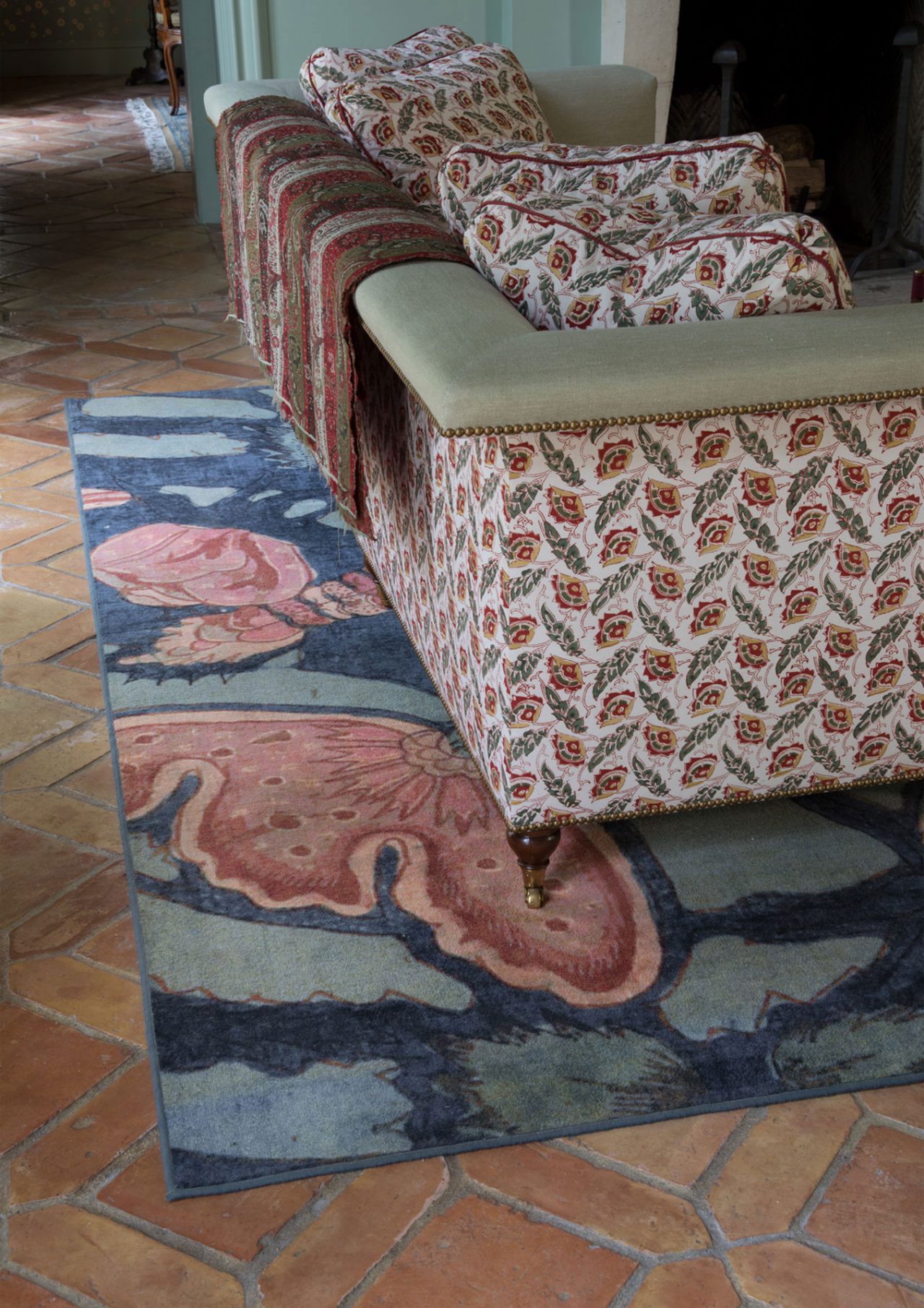 The pair of custom sofas are based on an early 20th century design by Davenport. The carpet was a custom design, digitally printed from a small piece of 18th century Indian chintz from Cora Ginsburg.

The walls of the great room are painted Farrow & Ball’s Blue-Green which harmonizes with the gardens. This house has a unique collection of 18th and 19th century continental furniture- mainly Italian. The antiques are juxtaposed against a collection of contemporary art featuring works by Chloe Lamb, Eric Aho, and Henry Finkelstein. 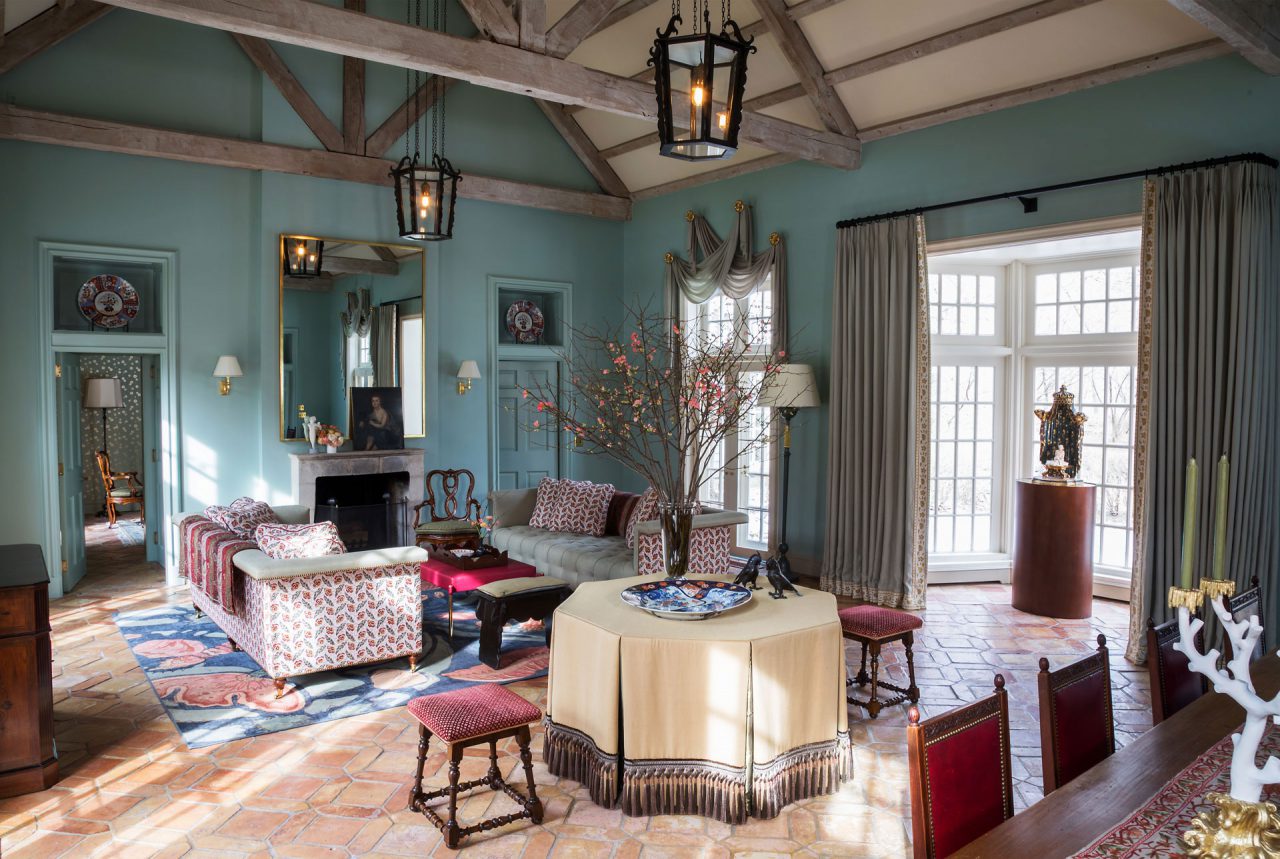 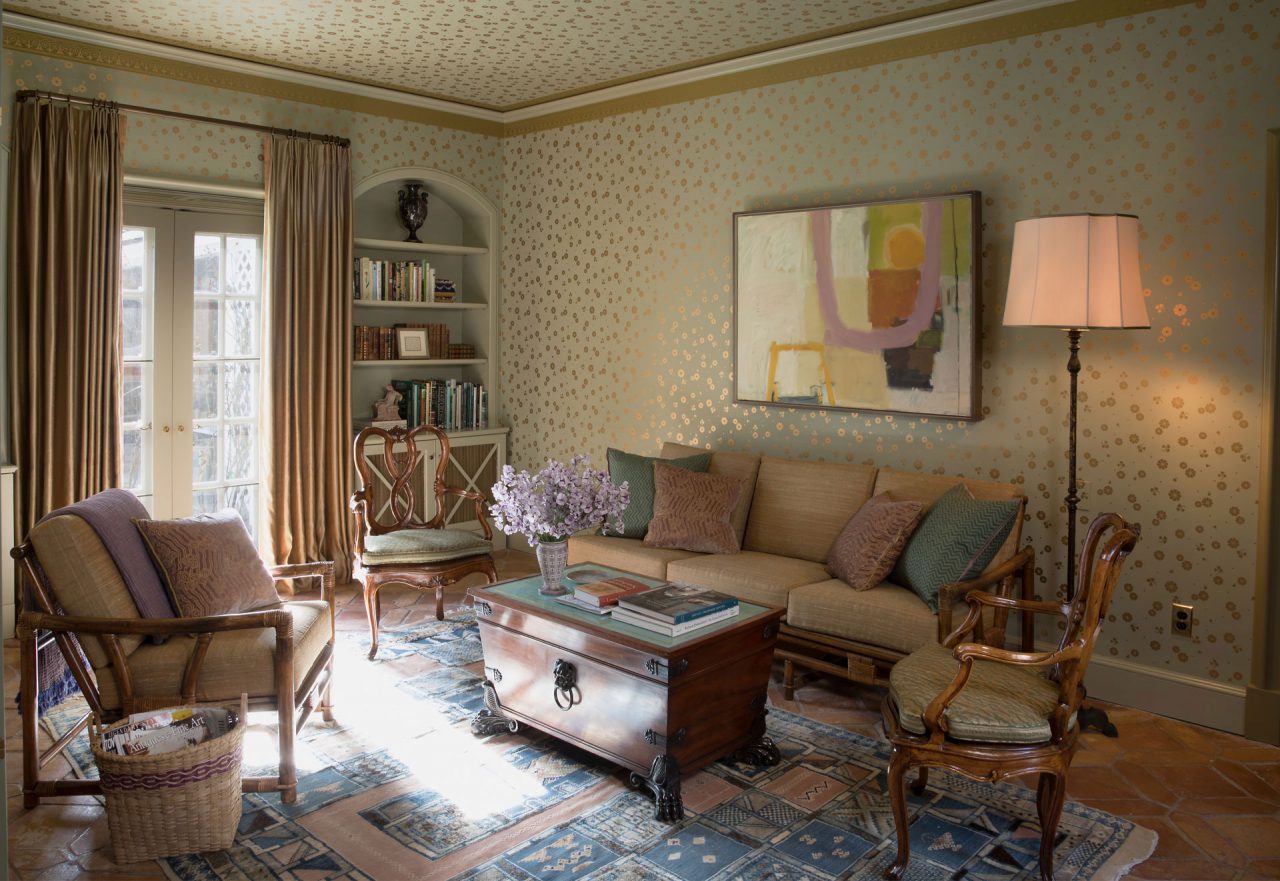 For the library we broke with custom and used a Victorian wallpaper designed for ceilings on both the walls and ceilings. A paper border was applied on either side of the cornice. 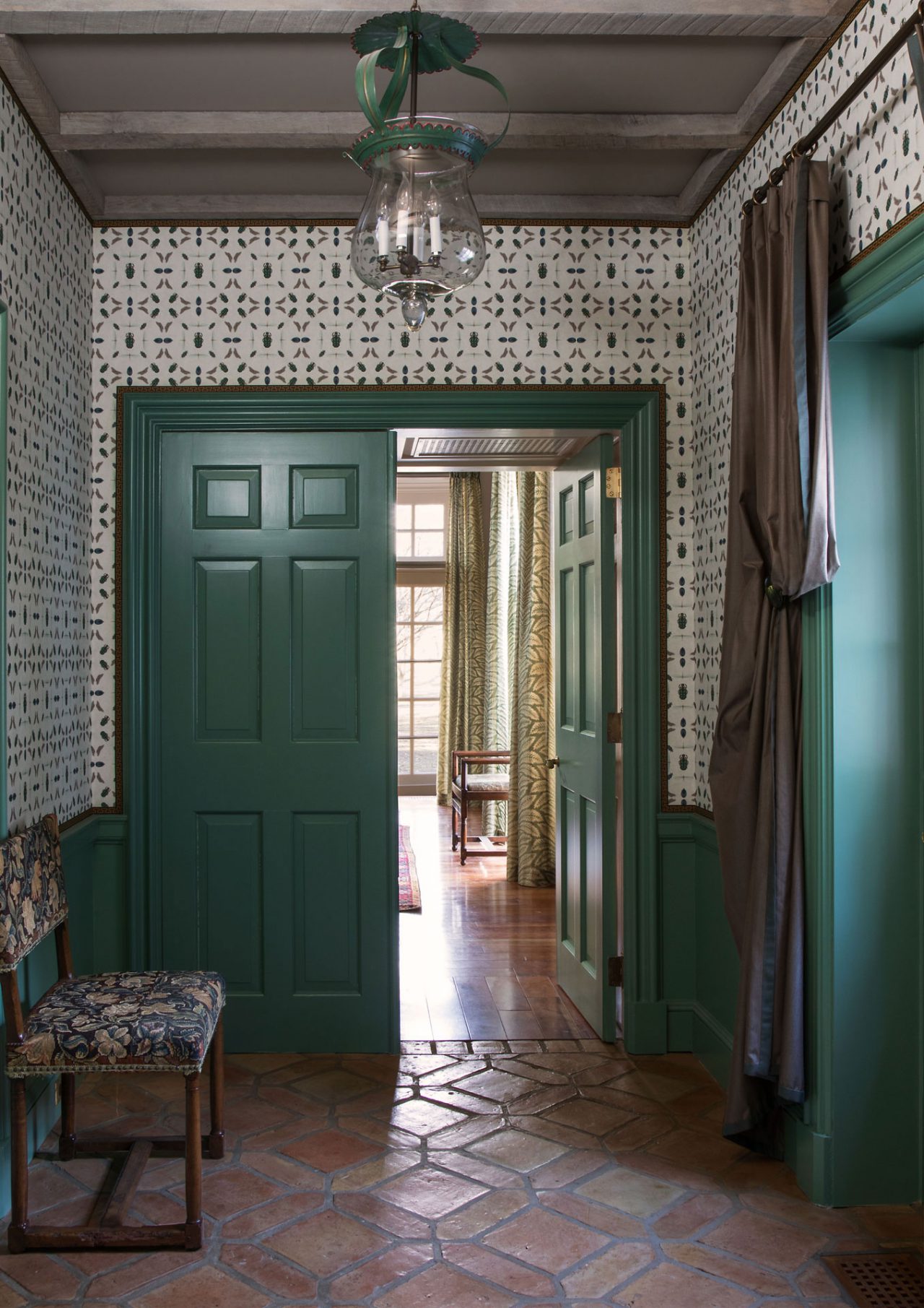 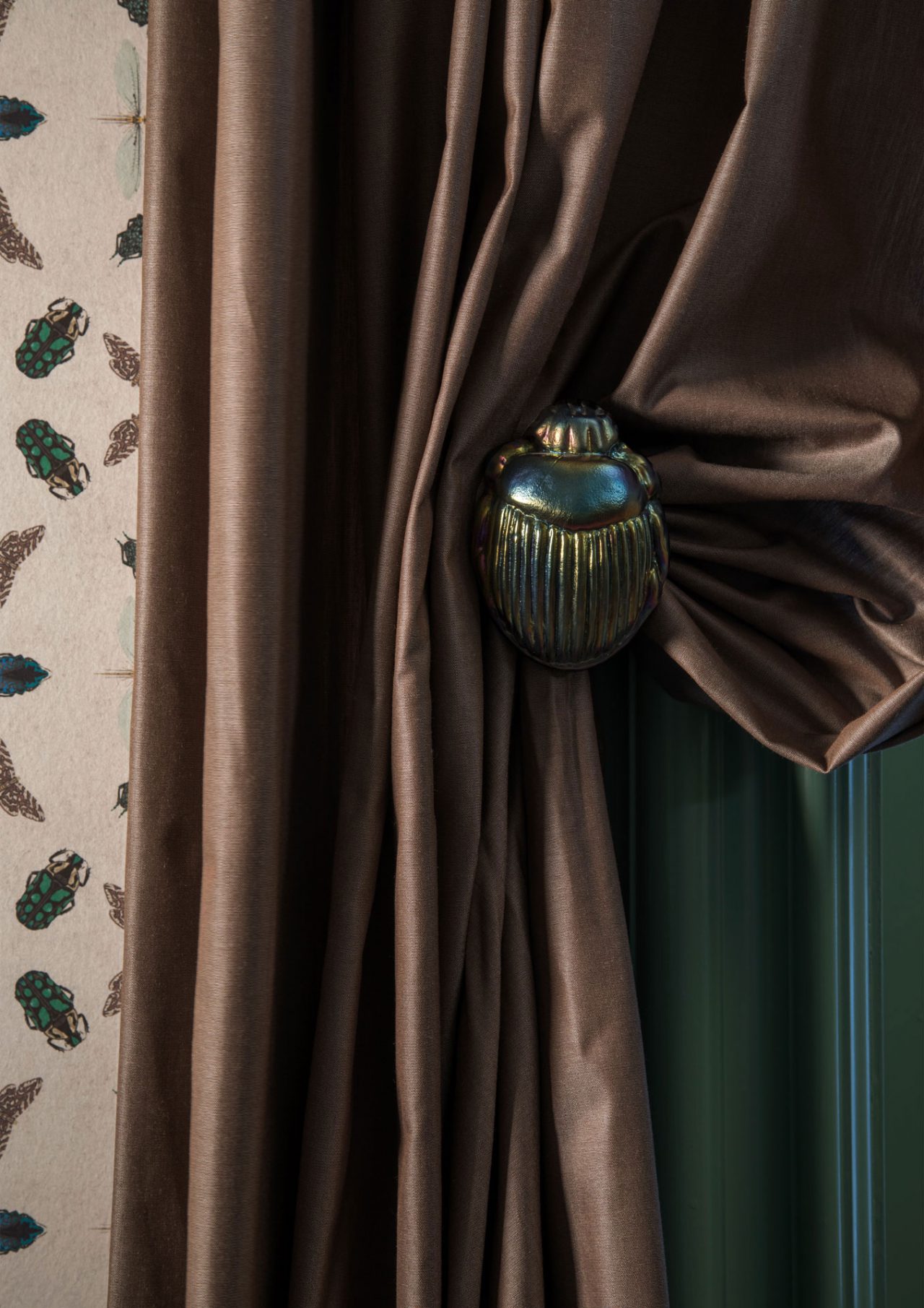 The vestibule to the main bedroom has a contemporary wallpaper by Jennifer Shorto. We purchased reproduction Tiffany scarab paperweights and mounted them as curtain tiebacks to relate to the wallpaper. 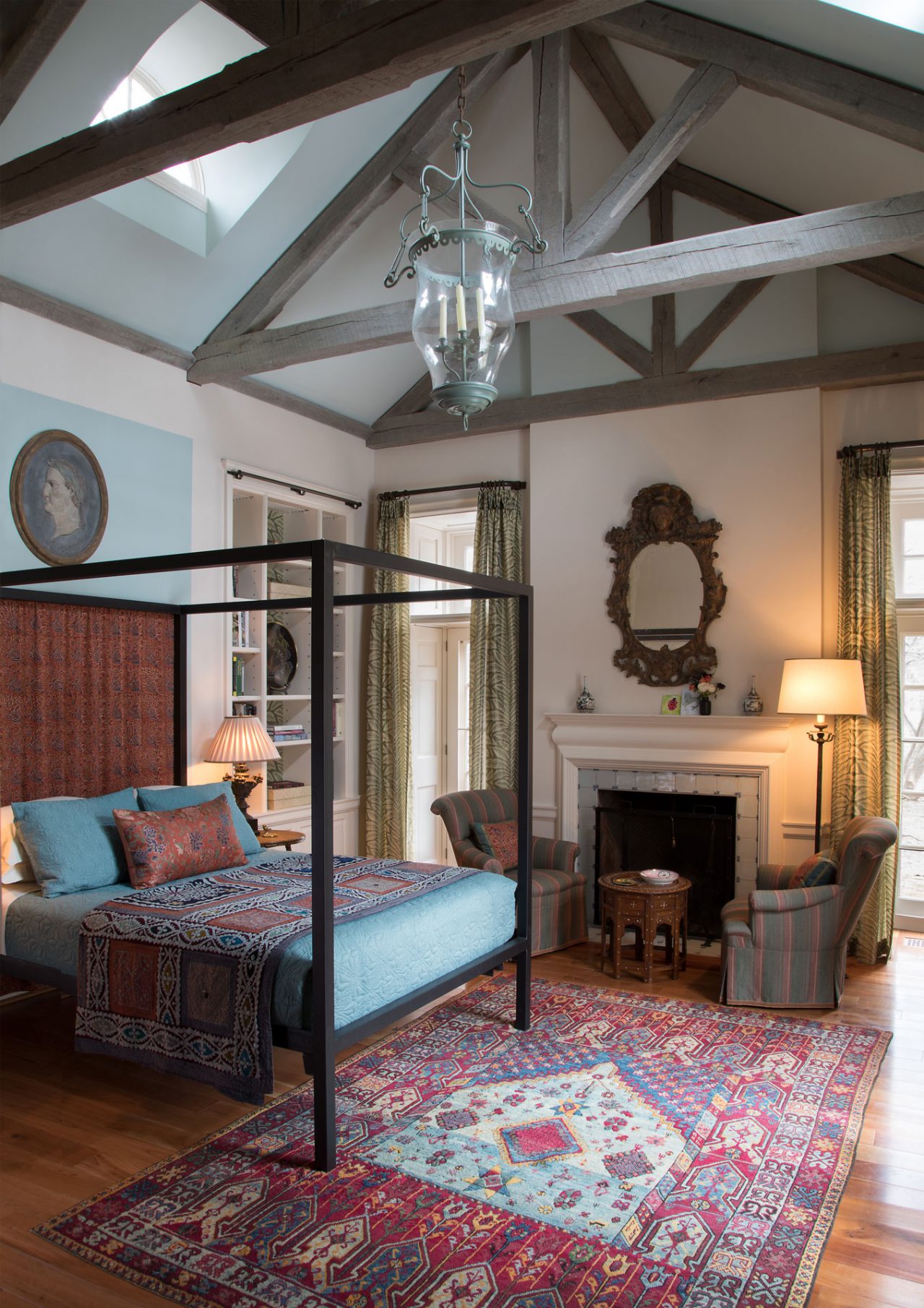 A contemporary bed centers the traditional architecture of the first floor bedroom. The Turkish carpet is from Doris Leslie Blau. 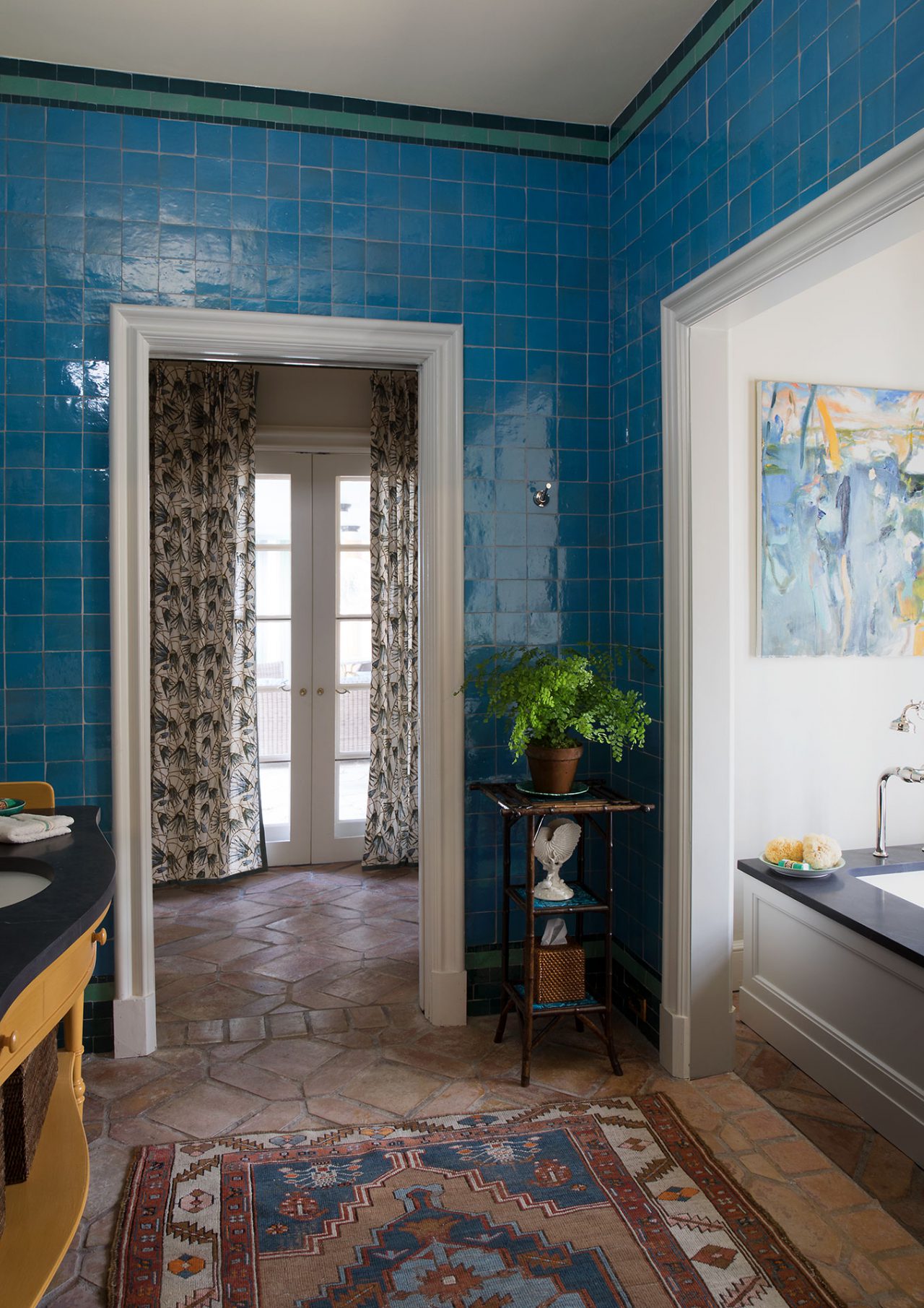 We clad the bathroom walls with turquoise Moroccan tile, framing it with custom borders in two shades of green. A painting by Eric Aho hangs above the bathtub.

The hearth offered an opportunity for decoration- we clad it with a mosaic of Moroccan tiles with a custom Egyptian Revival frieze based on an ancient example at the Metropolitan Museum of Art. 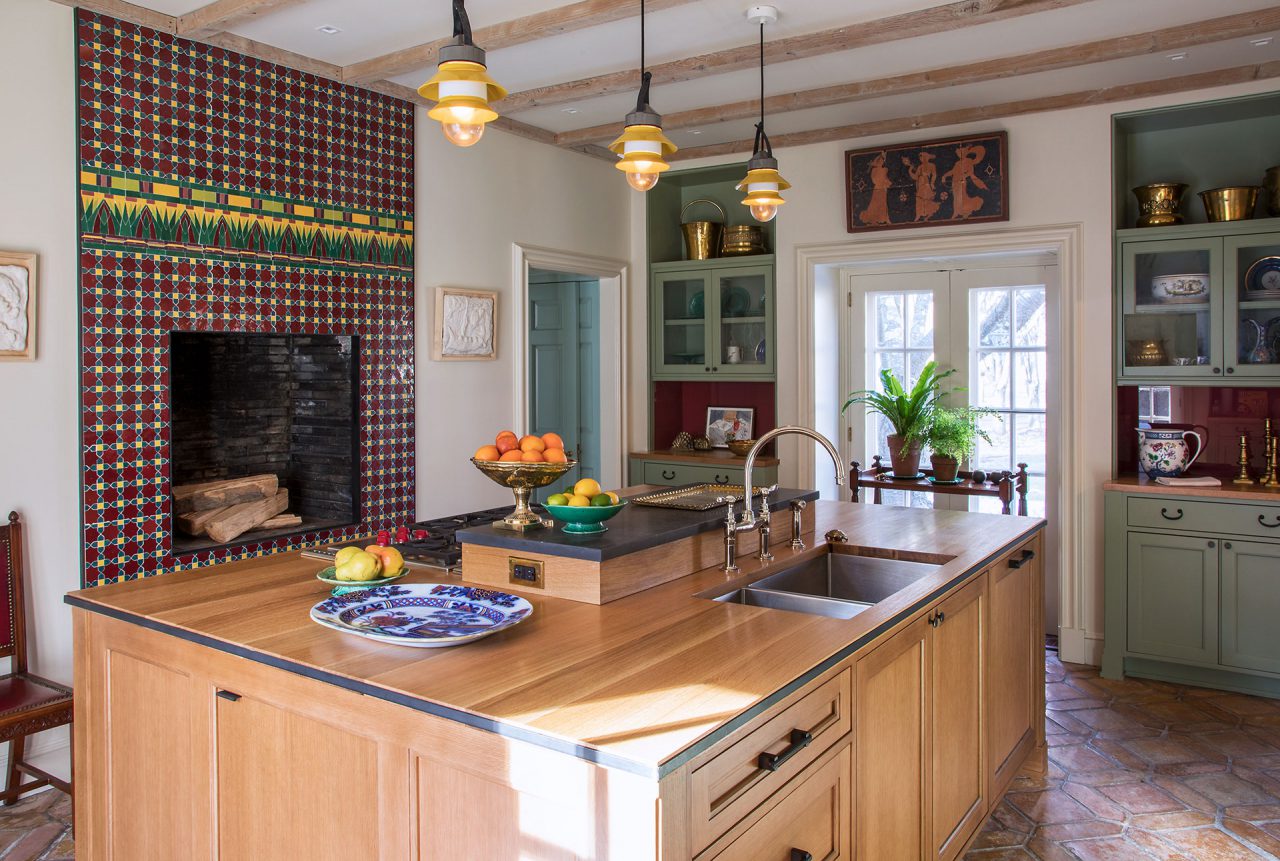 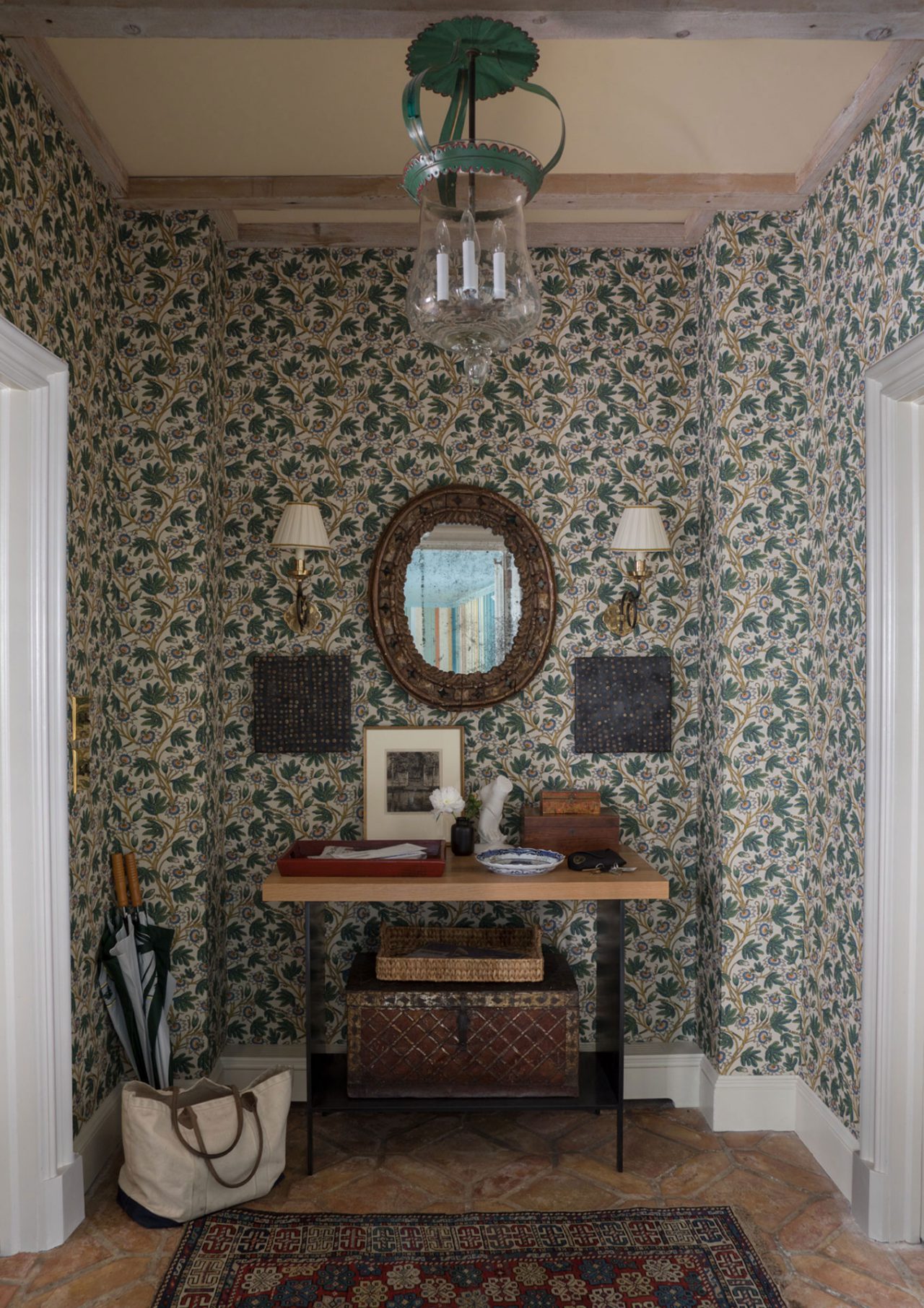 The printed linen we applied on the walls – a pattern of meandering passion flowers- is an introduction to the patterns and colors throughout the house. The lantern is an original fixture supplied by Easton which is complimented by a pair of sconces from Robert Kime. 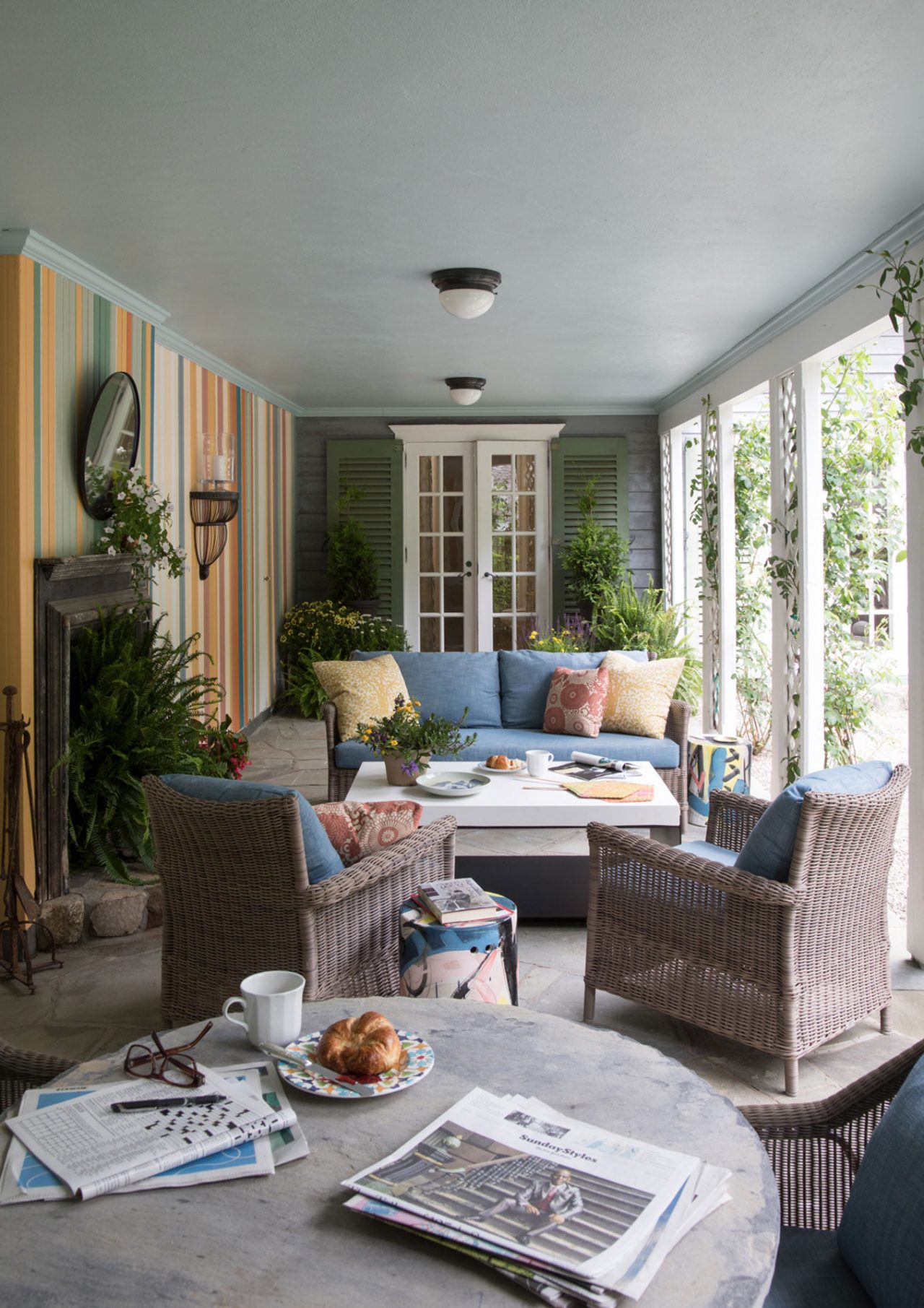 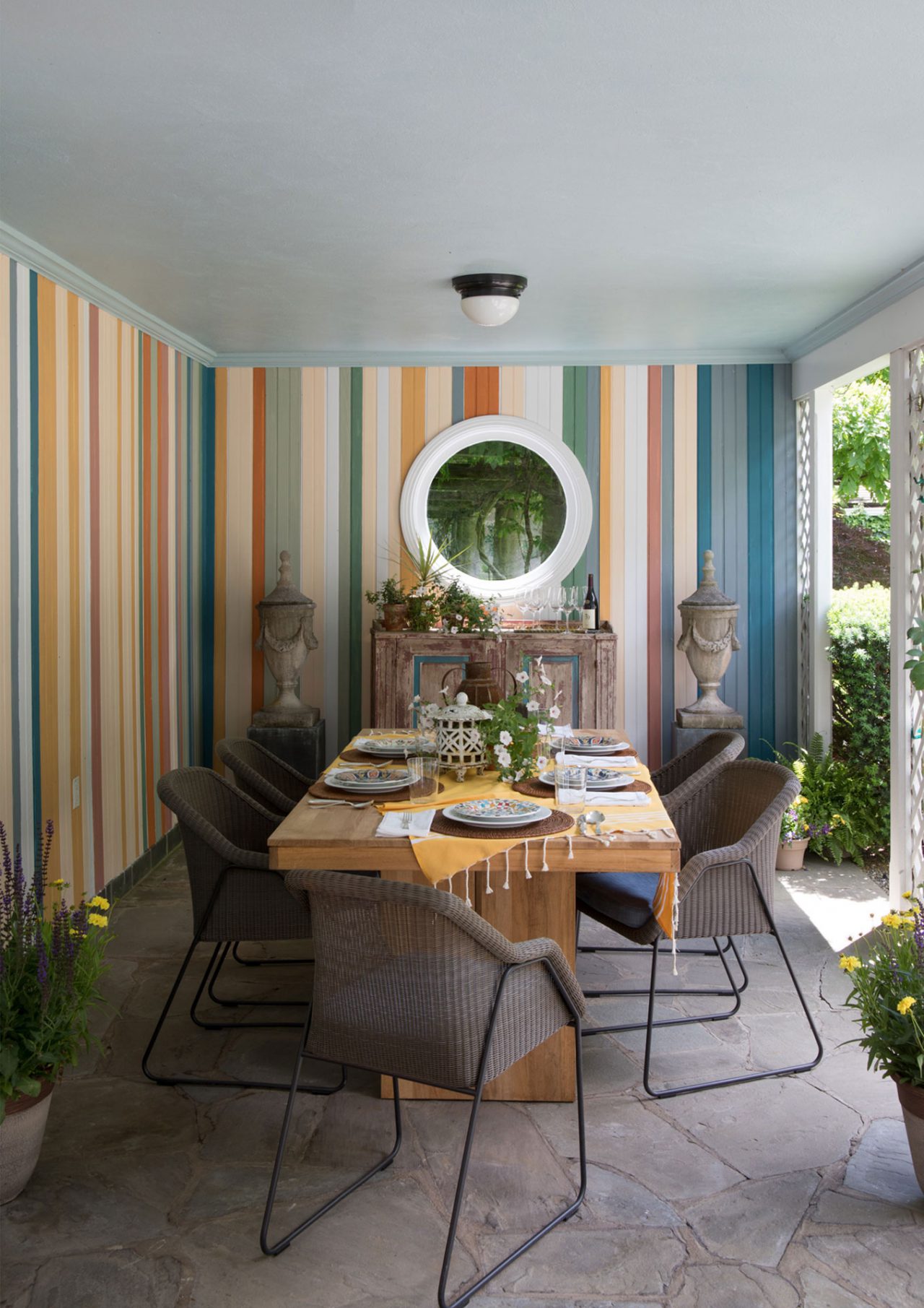 The house has two loggias; one extends off the entry hall, the other off the master bath. The bead board walls were painted by Chuck Hettinger in an asymmetrical arrangement of stripes of different sizes and colors.