Our client lives in a charming but small house, so when the opportunity to buy the place next door arrived, they gladly bought the house and dedicated it to hospitality and art. Built in the 1980’s the interiors where filled with elaborate moldings and wallpaper. We simplified the rooms with the spirit of Early American architecture with some later Arts and Crafts details. The ground floor rooms are designed for the display of art and for entertaining, with guest rooms upstairs. The decoration reflects the philosophy of our client and Jayne Design Studio that great design is often a combination of the old and new– or as we often phase it: ancient and modern.

Like most comfortable houses, the back door serves as the main entrance with a porch to shelter it. The porch columns are patterned after bamboo with Asiatic influences and decorative paint by Chuck Hettinger. We often use antique lighting such as the pierced Japanese lantern. The art installation is by Maurizio Pellegrin and references the boats in the nearby harbor. 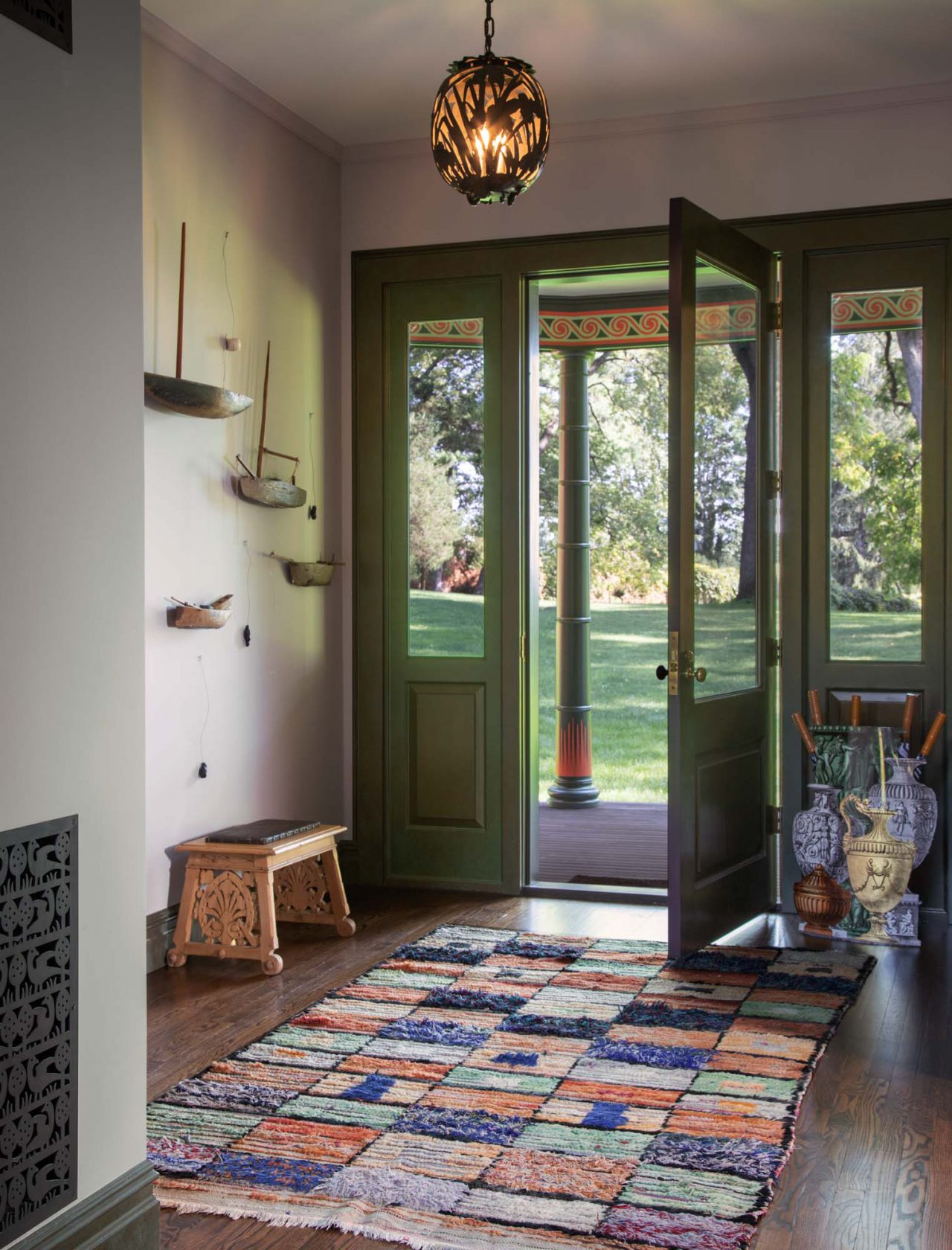 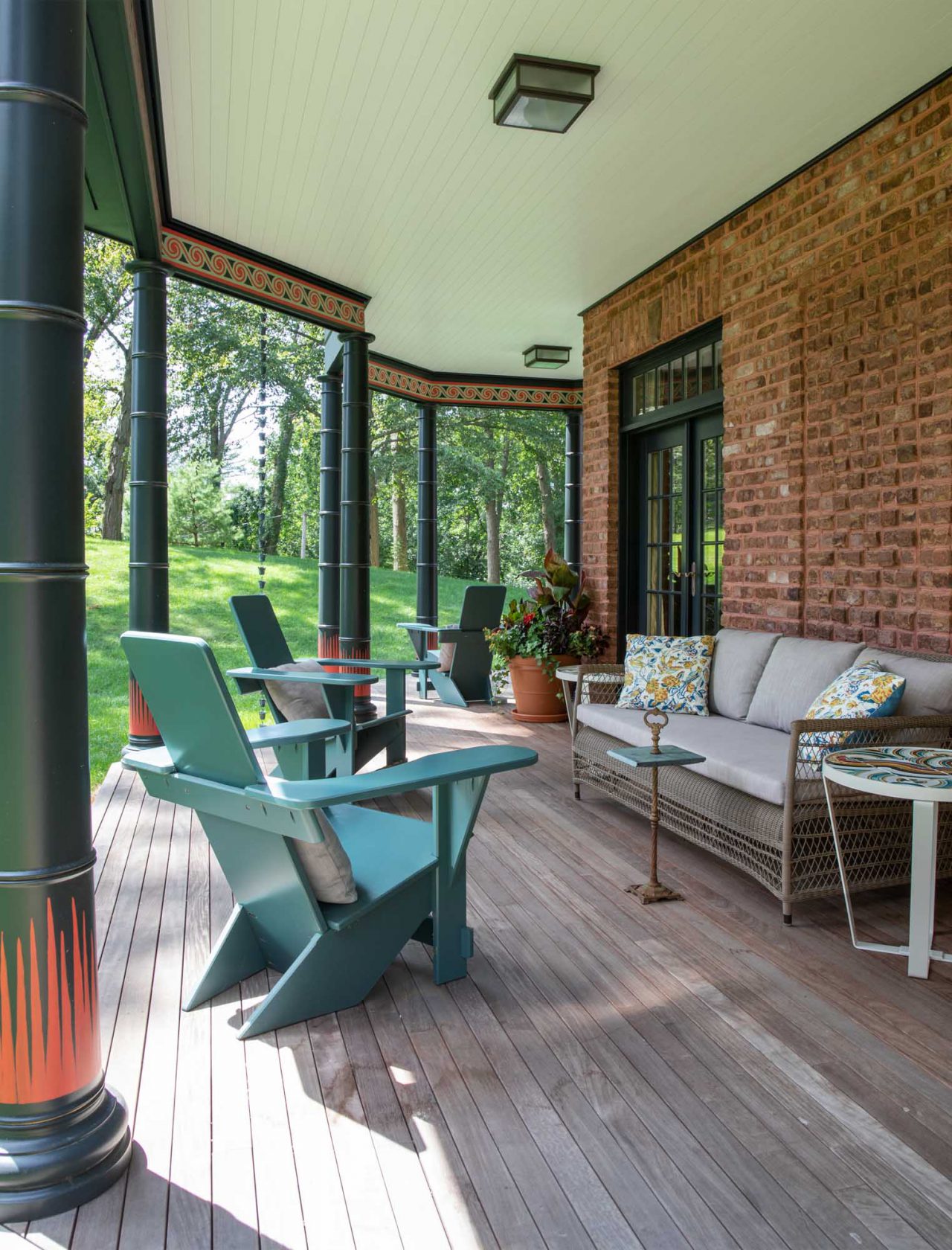 The dining room is only occasionally used for large dinners and more often as an art gallery. The antique Italian bench from Blackman Cruz serves as a pedestal for sculpture. The column stand was designed by the august architect and collector Sir John Soane for galleries in his own house. The 18th century English Georgian Tea Table is a handsome foil for the modern chairs from Howe. 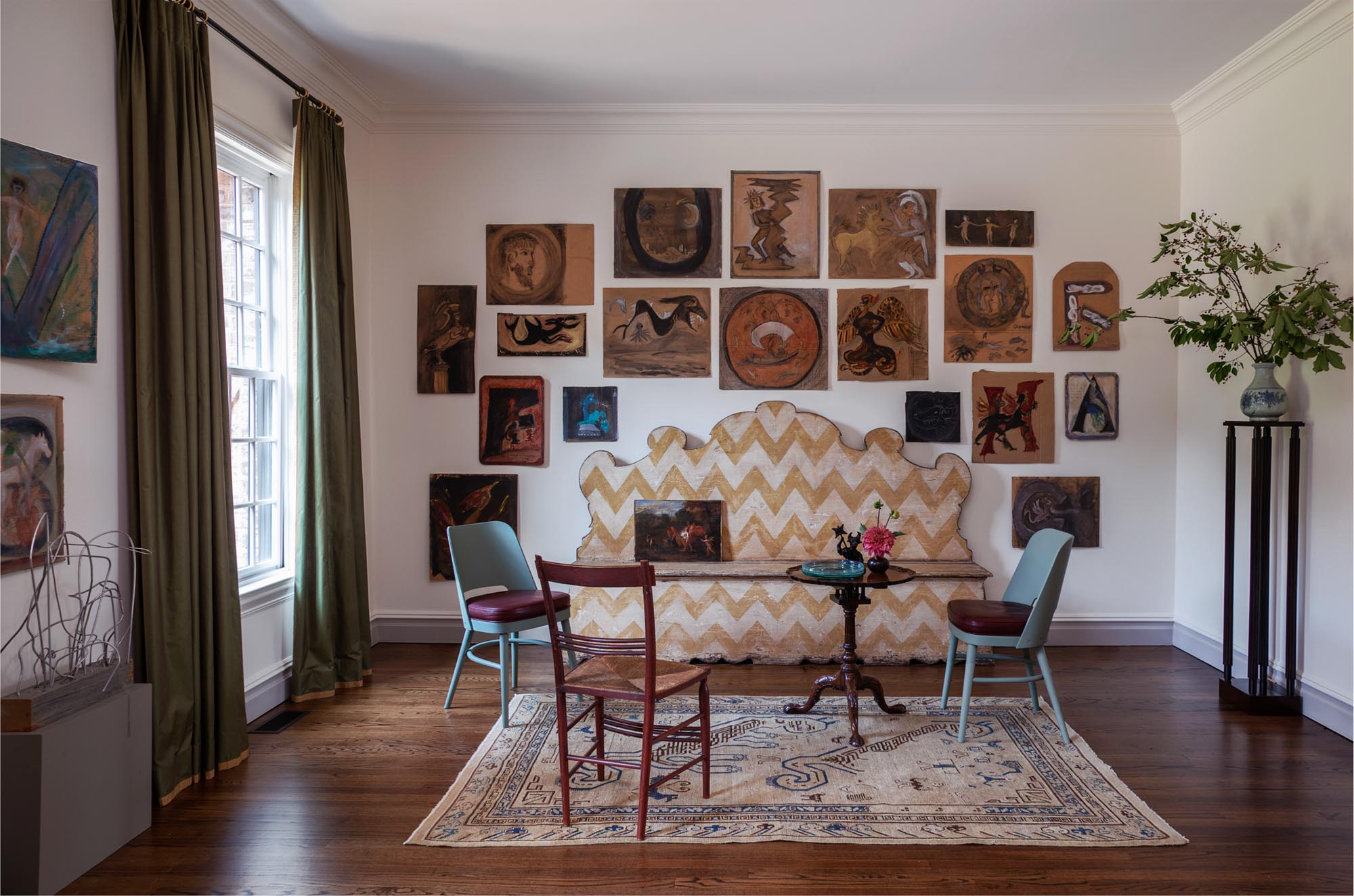 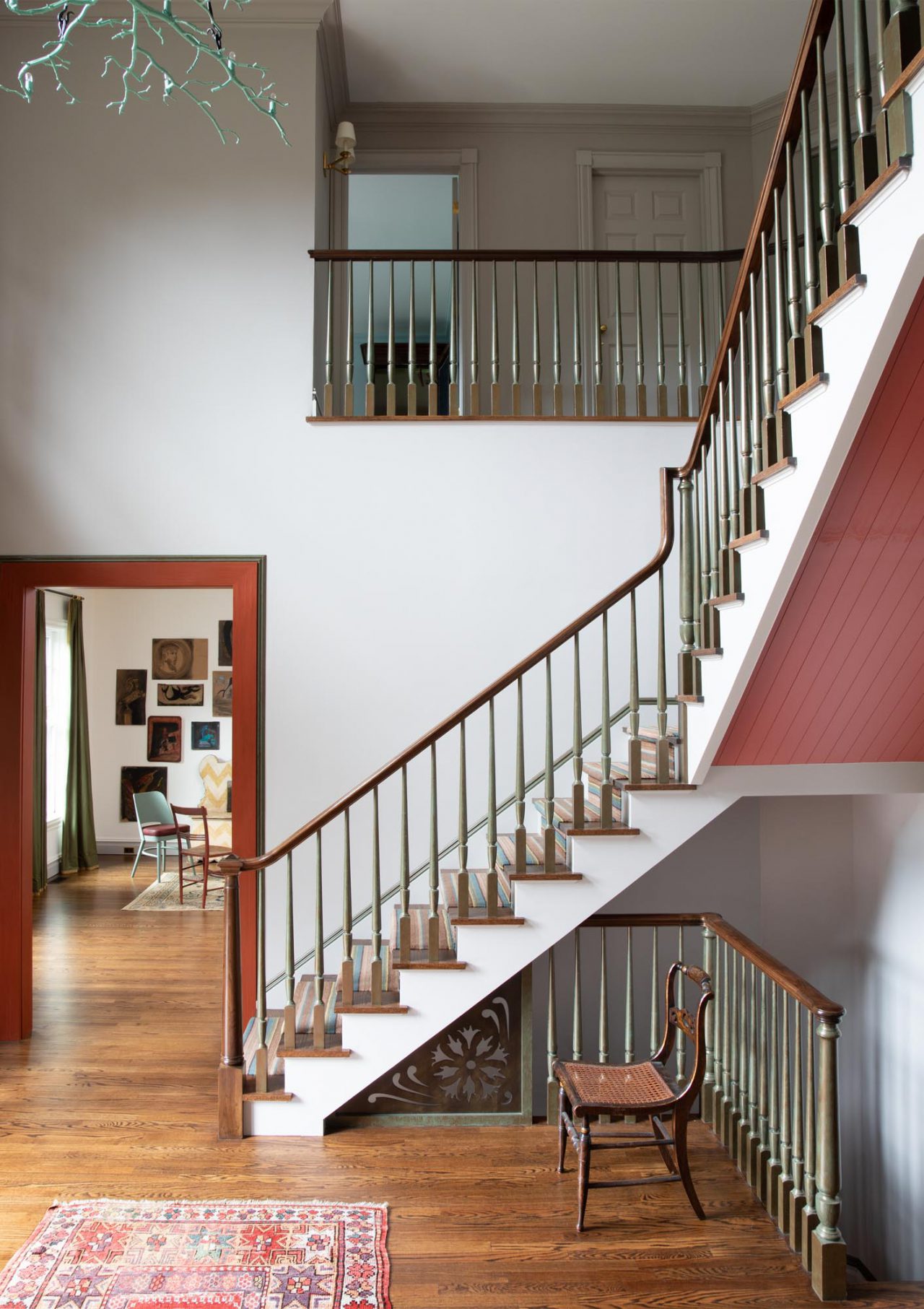 The stairwell in the foyer was redesigned to make it more functional and beautiful. The staircase is a Georgian model often found in American houses. The grill is a fancy safety feature to make the room safe for children and pets.
This room, in the turret at the side of the house, required additional structural support and the steel braces were added. The braces connect into a metal circle to frame a light with an embroidered shade. The statue is of Saint Elizabeth patron of our client. 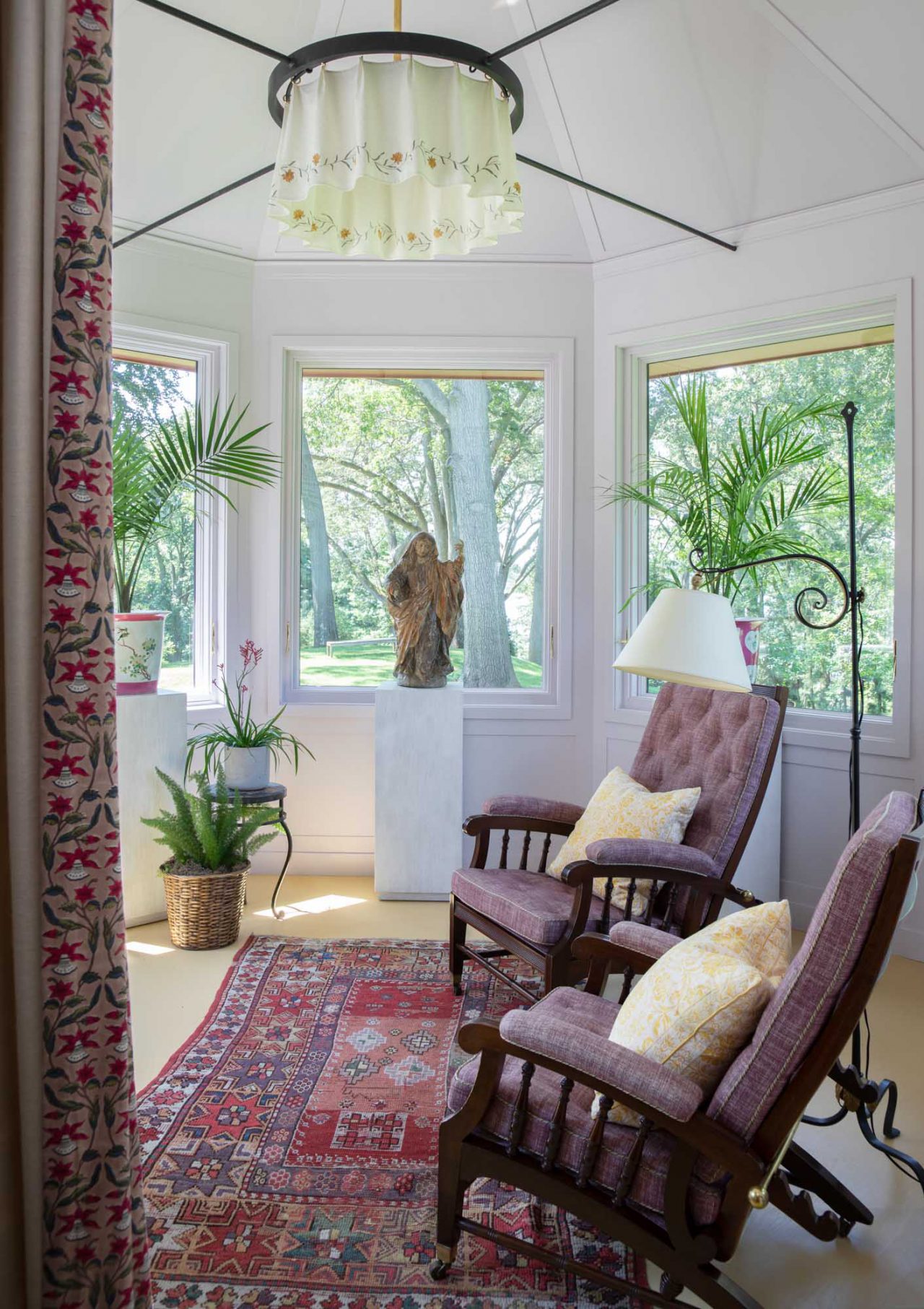 The design for this hall makes an easy connection between the two galleries, made from the existing living room and dining room spaces. A Mary Abbott oil painting is seen to the left, while one by Peter Bonner sits to the right. The mythical beast on the window wall was painted by Betsy Lawrence. 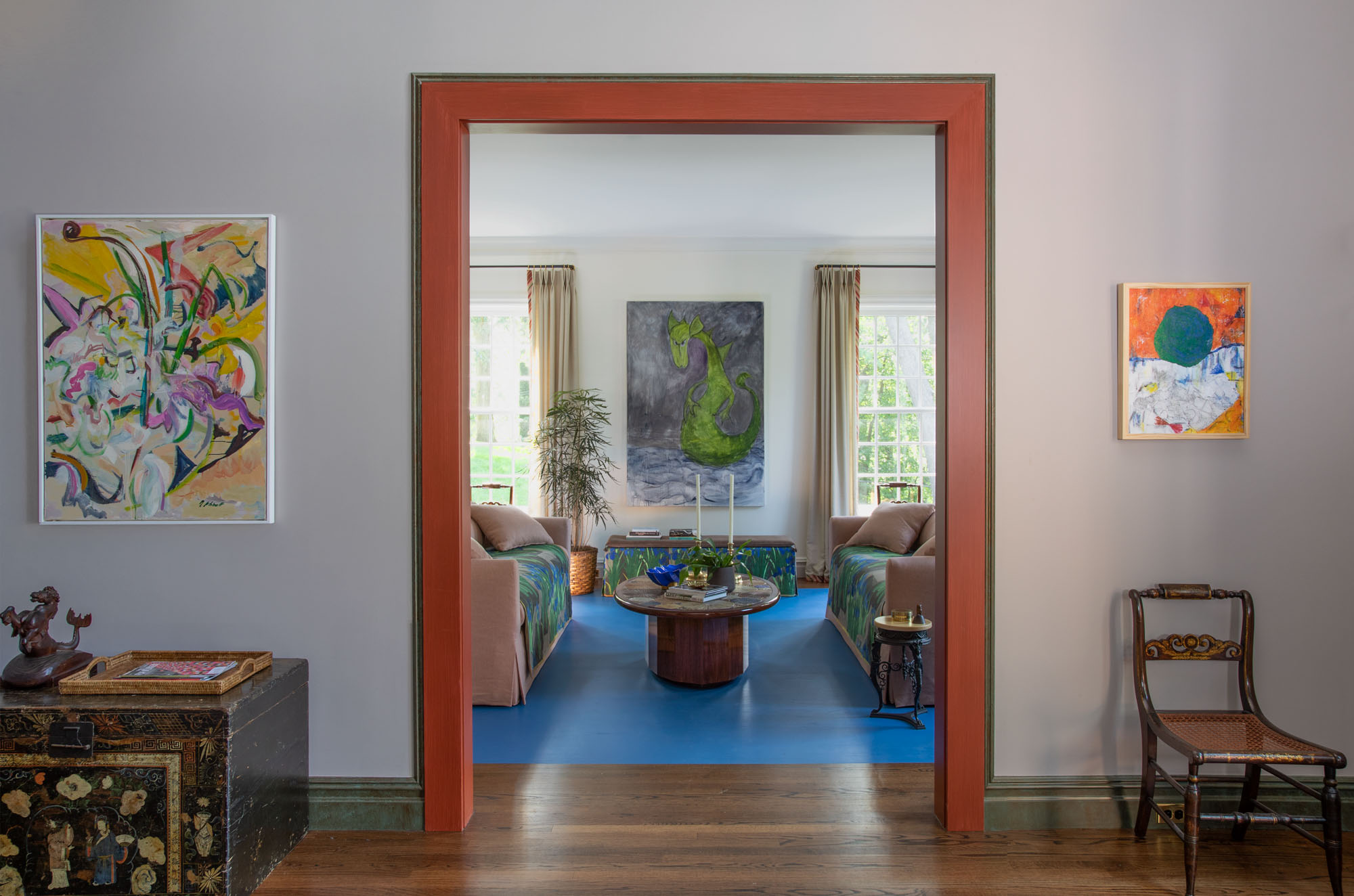 These rooms are flexible spaces for art shows and events, with a blue painted panel on the floor in lieu of a carpet, and a pair of sofas on wheels. 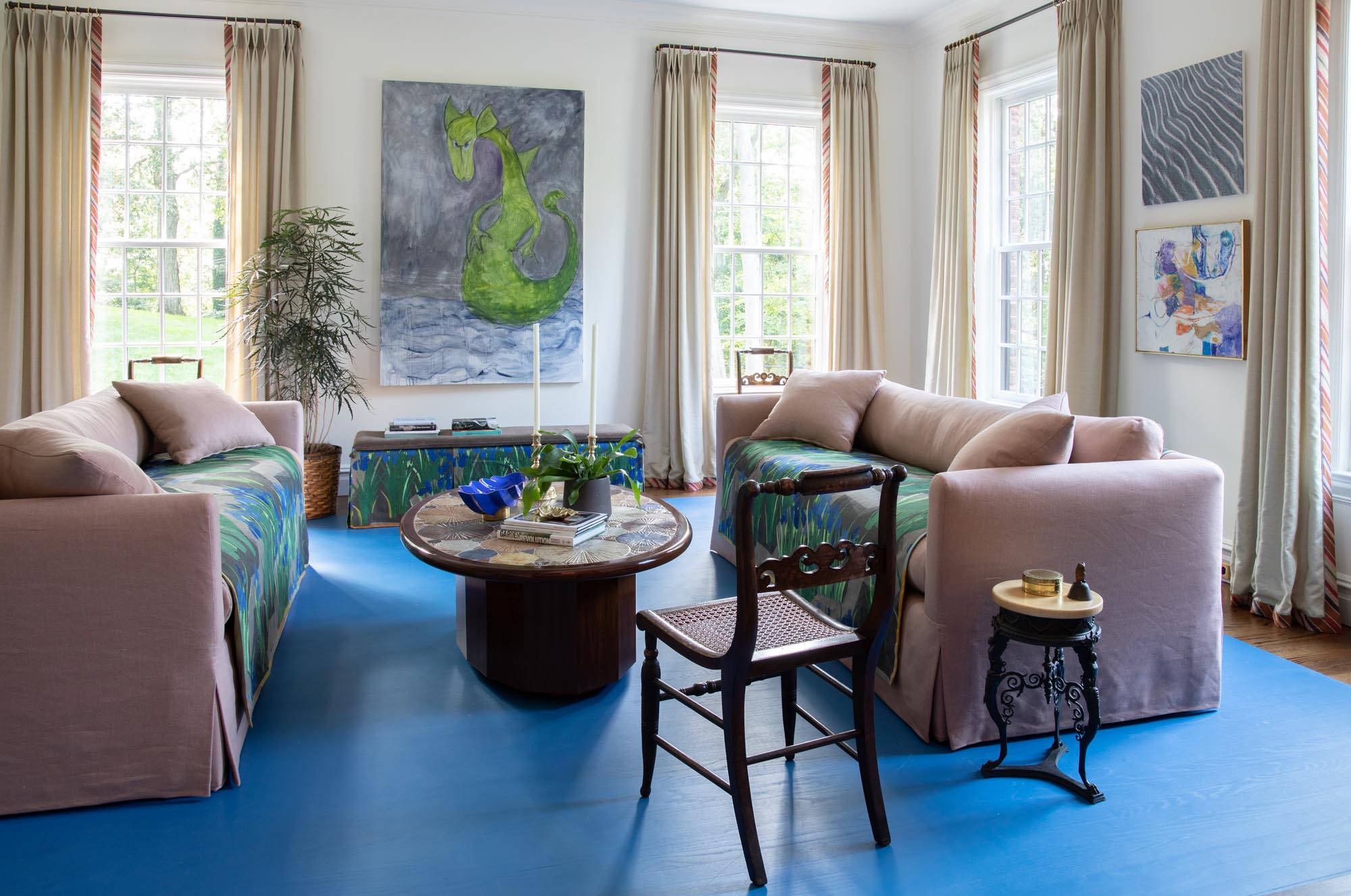 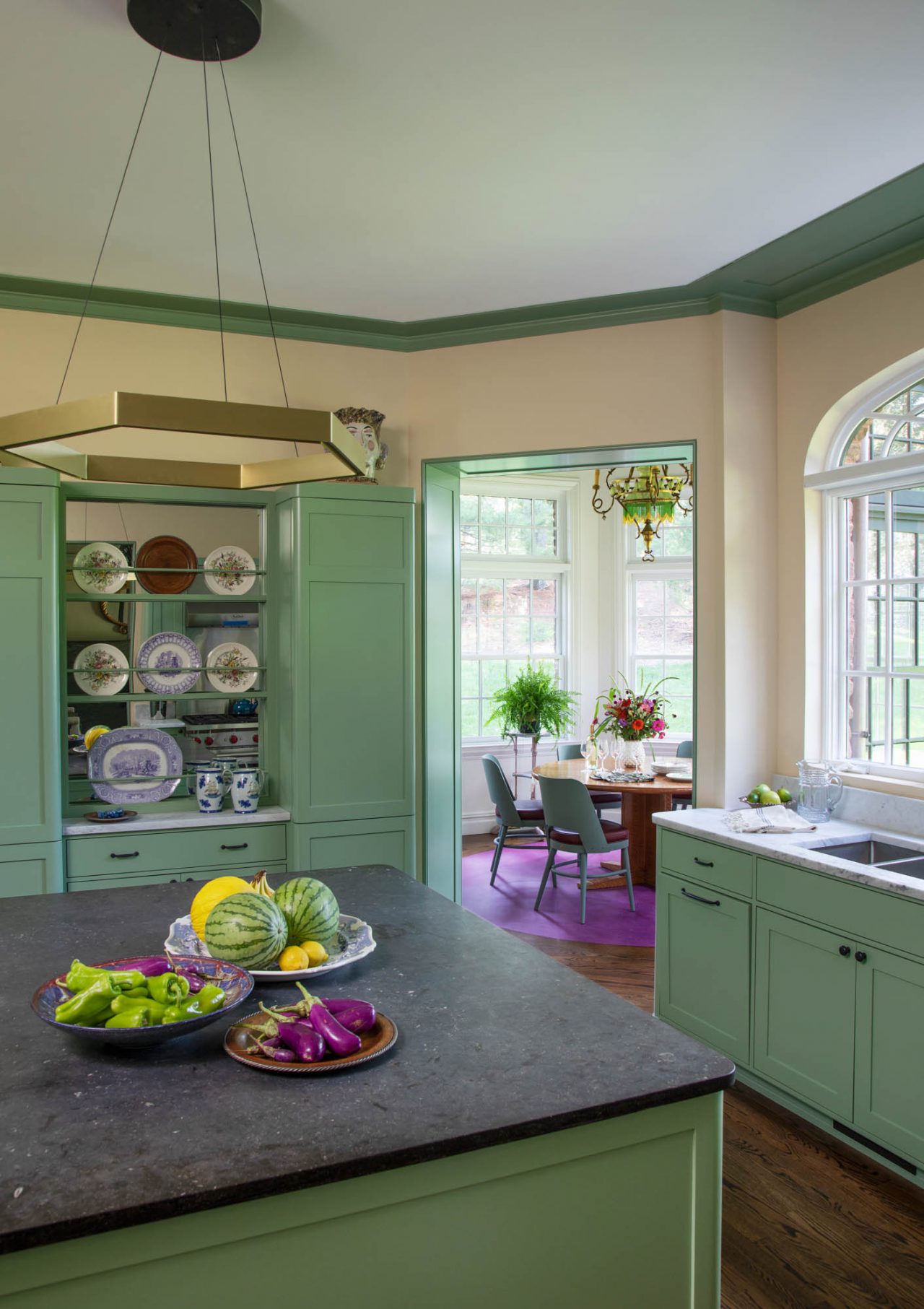 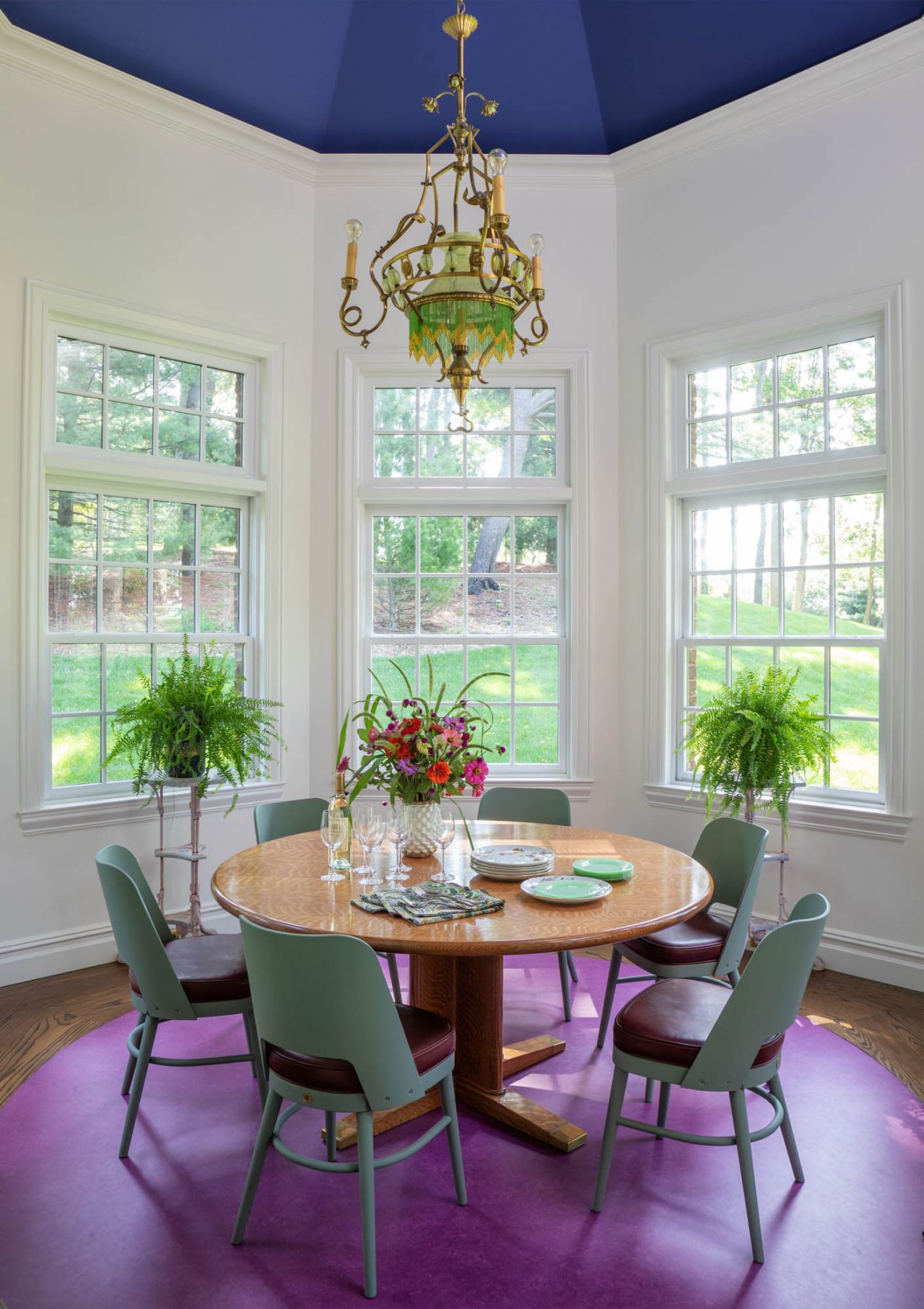 The new kitchen cabinets were inspired by a 1916 design by Charles Rennie Mackintosh, 78 Derngate Street. The kitchen opens on to the octagonal breakfast room. A Marmoleum circle is inlaid into the breakfast room floor – it is both practical and decorative. The late 19th century chandelier is decorated with glass fringe.

The green marble fireplace in the living room echoes similar models by architect Sir Edwin Lutyens. An Italian chest of drawers from dealer David Neligan, a giltwood mirror from Louis Bofferding and andirons sold by Nick Brock are the best examples of their type and mix well with the accompanying contemporary furnishings. The lion drawing is by Betsy Lawrence. 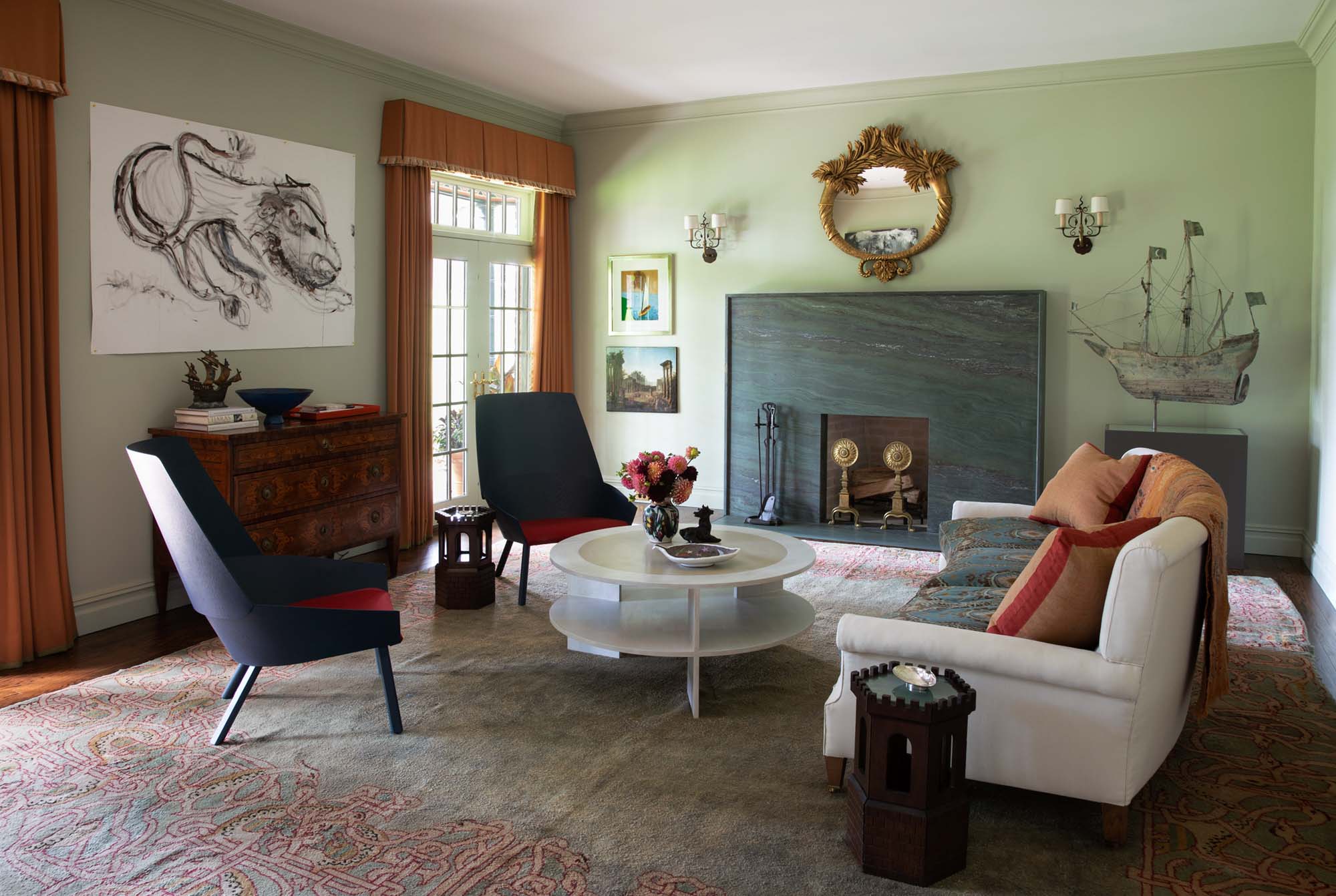 A Cowtan & Tout tapestry forms a backdrop for the modern four poster bed. The antique bedside tables are Swedish and are decorated with neoclassical motifs. Just down the hall is an alcove we transformed into a jewel box hideout for this family of readers, complete with a Fortuny light and bird incense burner. 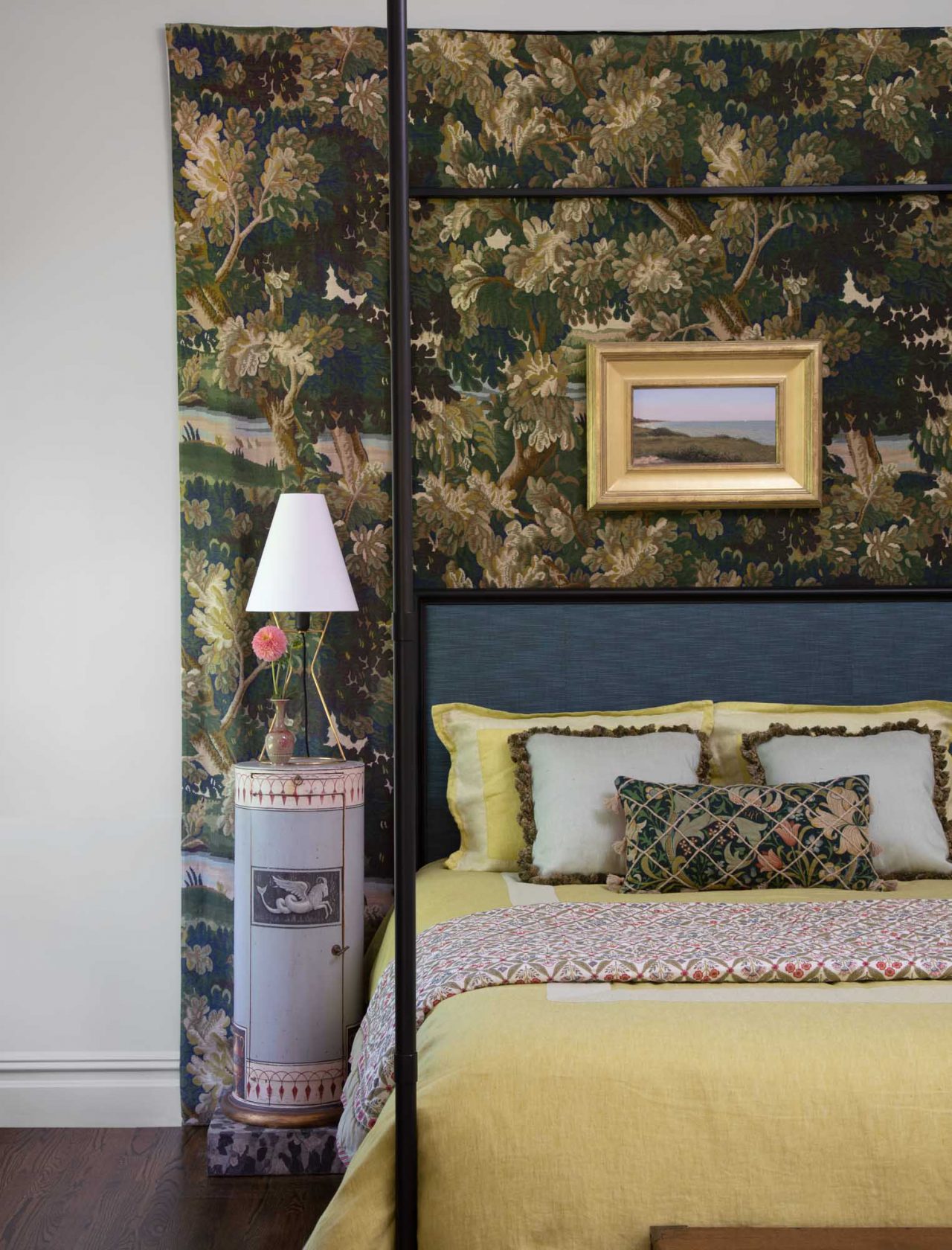 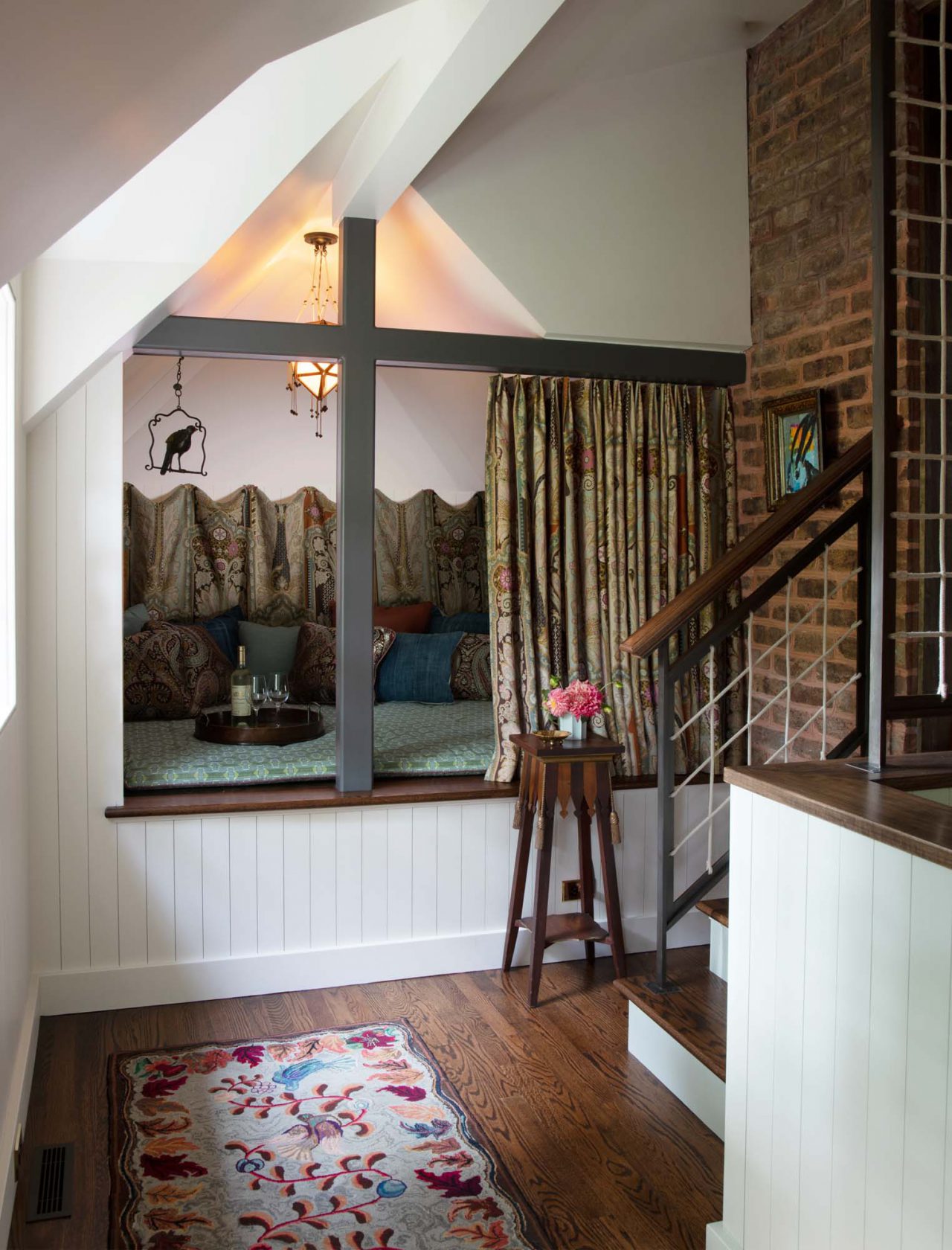 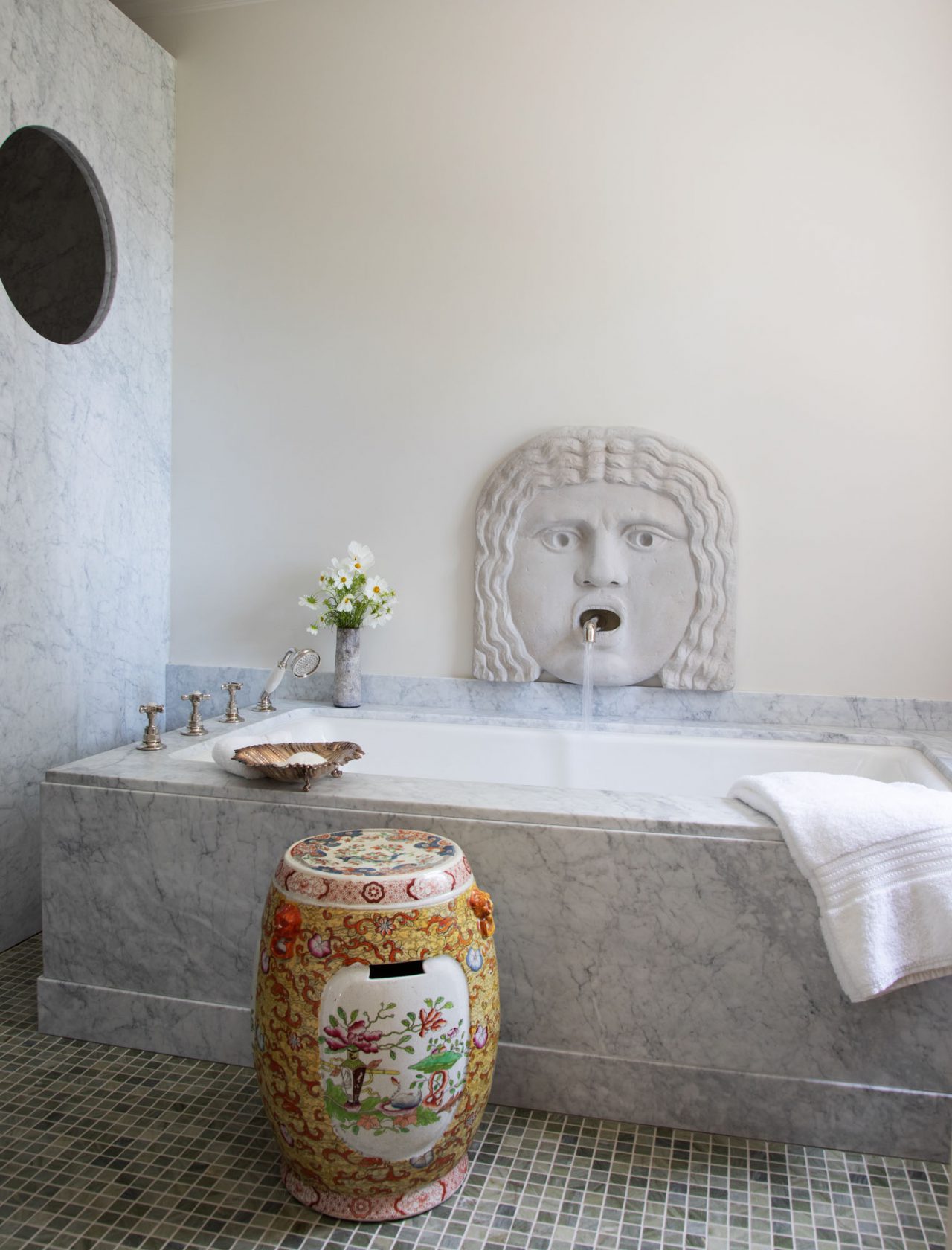 The principal bath features “The Mouth of Truth” an antique fountain head, reproduced from the Sir John Soane’s Museum. We designed the shower wall with a porthole to allow for harbor views.

We forged a connection between the back hall and the upstairs rooms by cutting a hole in the exterior wall and disguising it with a wardrobe – an ode to the homeowner’s fascination with mythology and The Chronicles of Narnia. The rope netting references the nautical setting, as the water can be seen from the second floor. A Hunt Slonem bunny painting accents the wall. 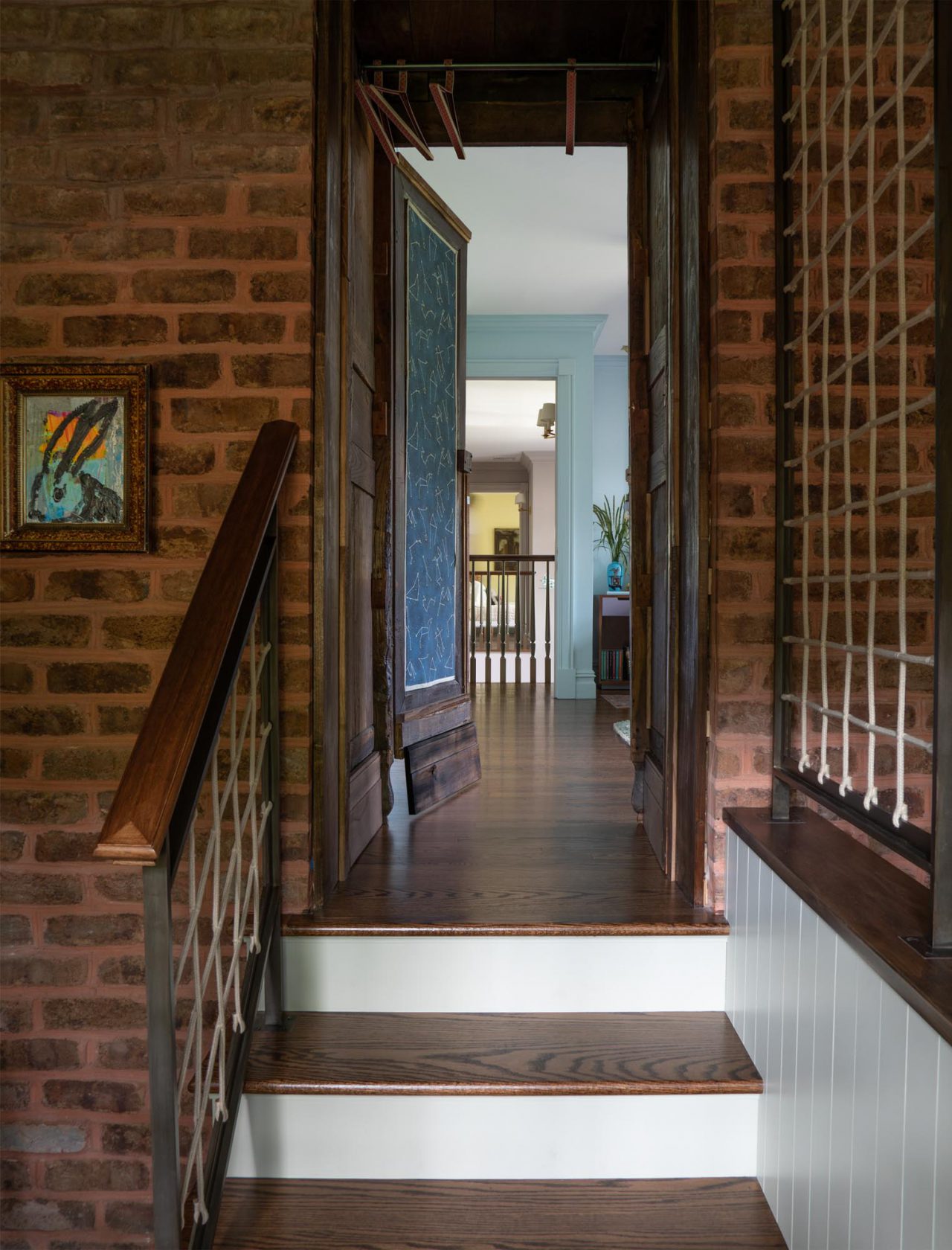 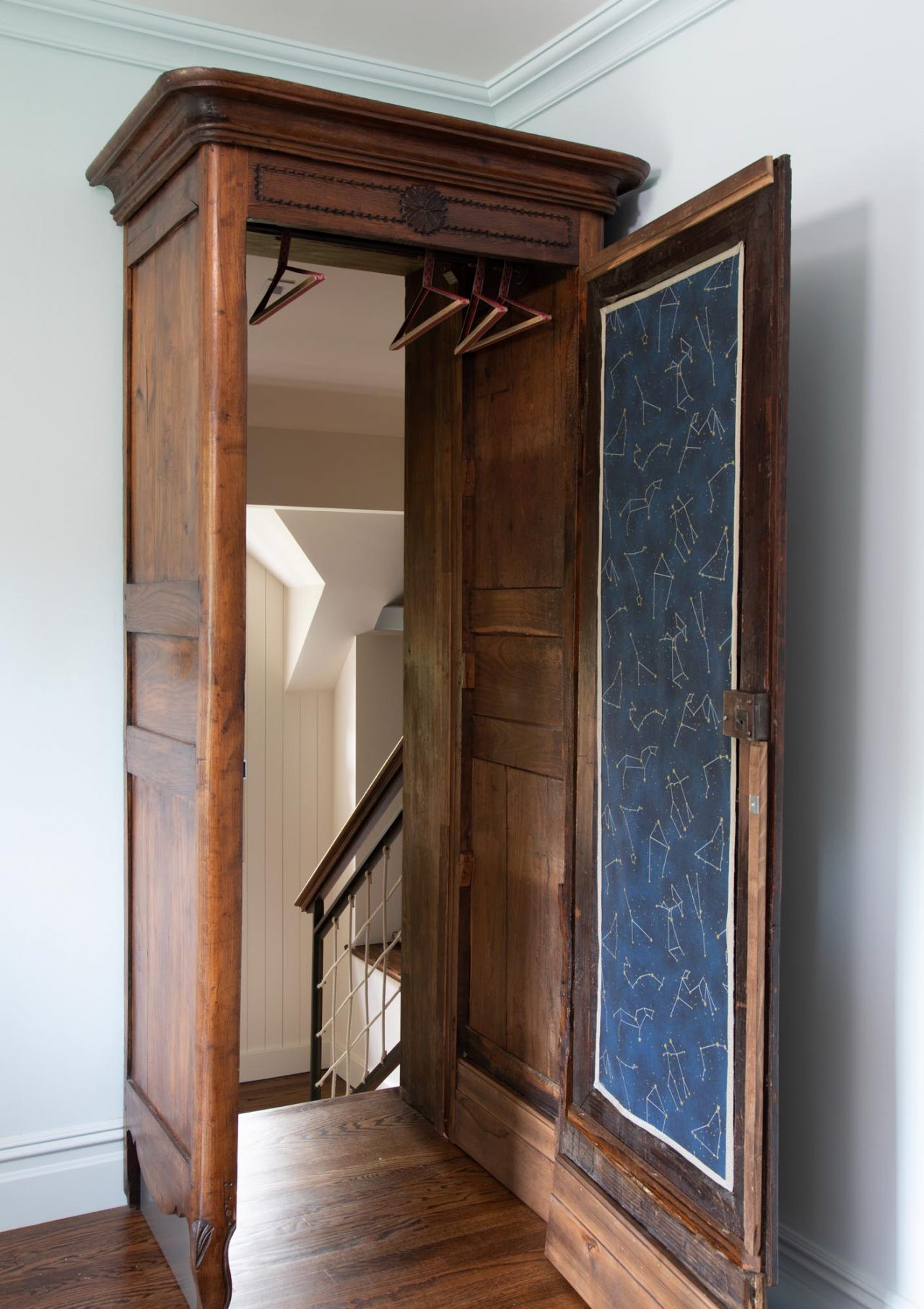 In an unused space over the garage, the ‘Narnia’ bedroom was created. We accentuated the architecture with board paneling and green painted accents for a nautical quality. 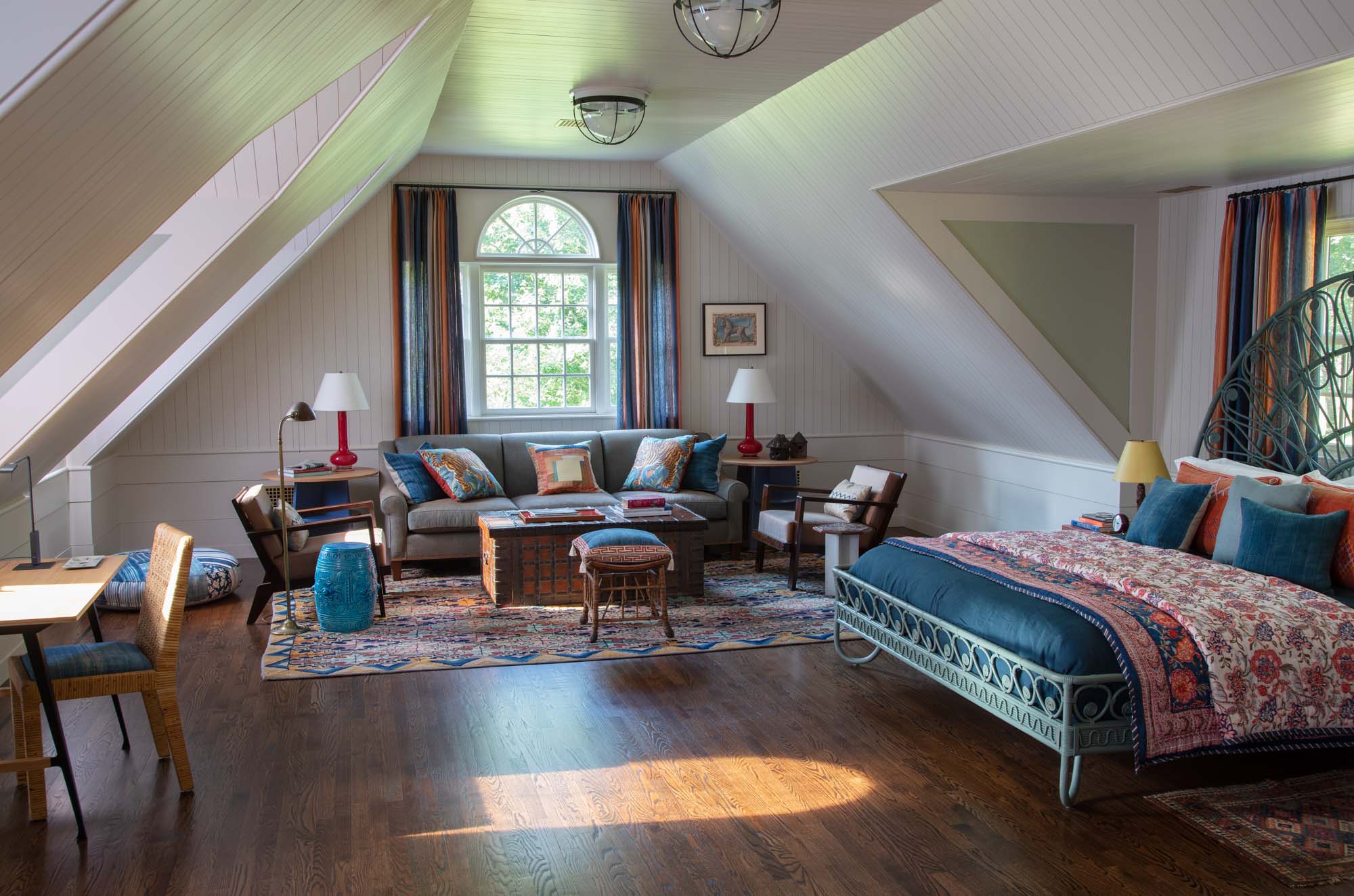 The ‘Feather’ bedroom is so named for the whimsical feather printed linen canopy. The bed is an Arts and Crafts design from the beginning of the 20th century. 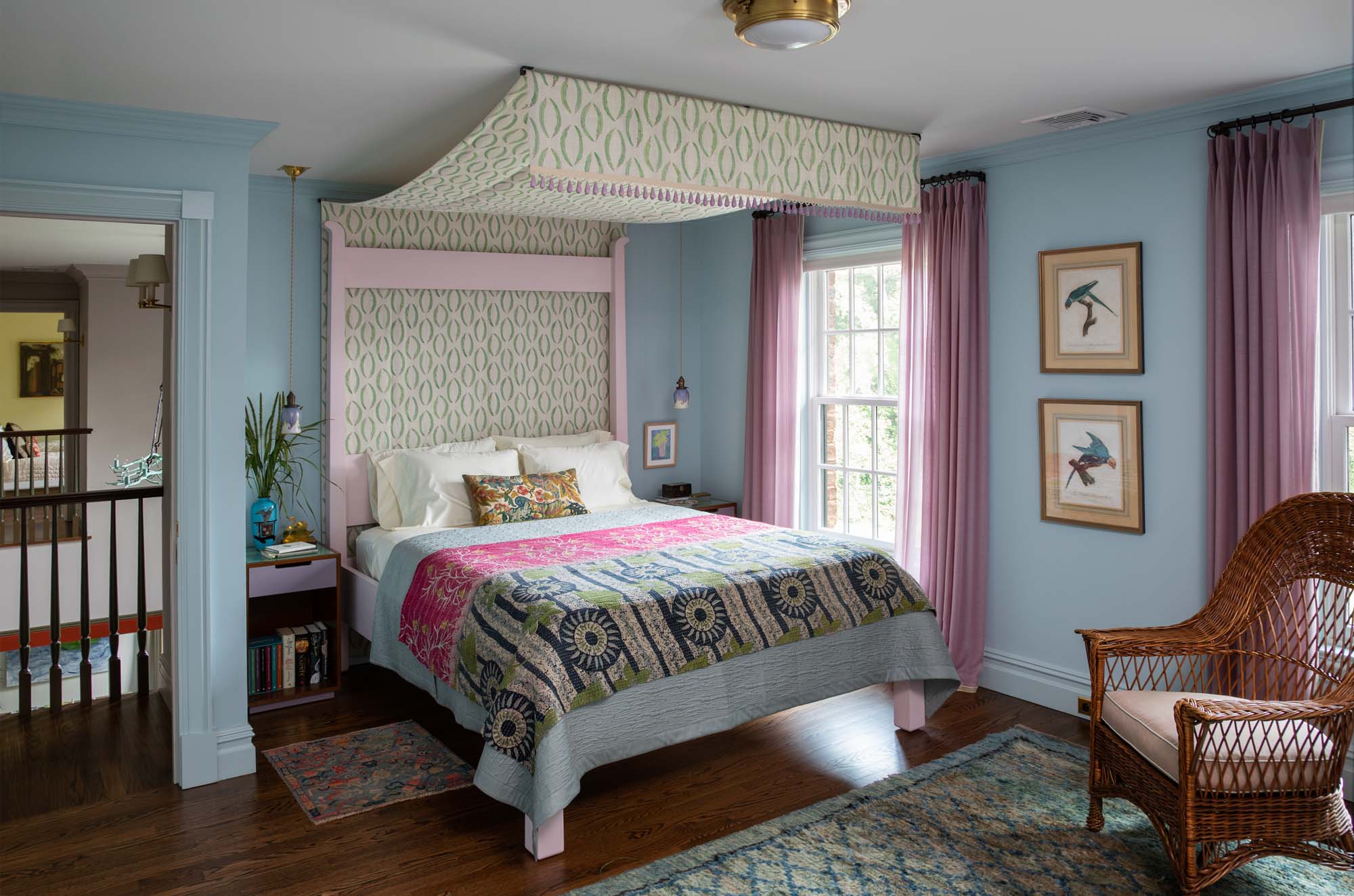 The ‘Scarab’ Bedroom was named in reference to the printed linen curtains. Furthering our client’s love of nature and myth, a Fornasetti mirror decorated with butterflies hangs above a Victorian wicker bookcase. 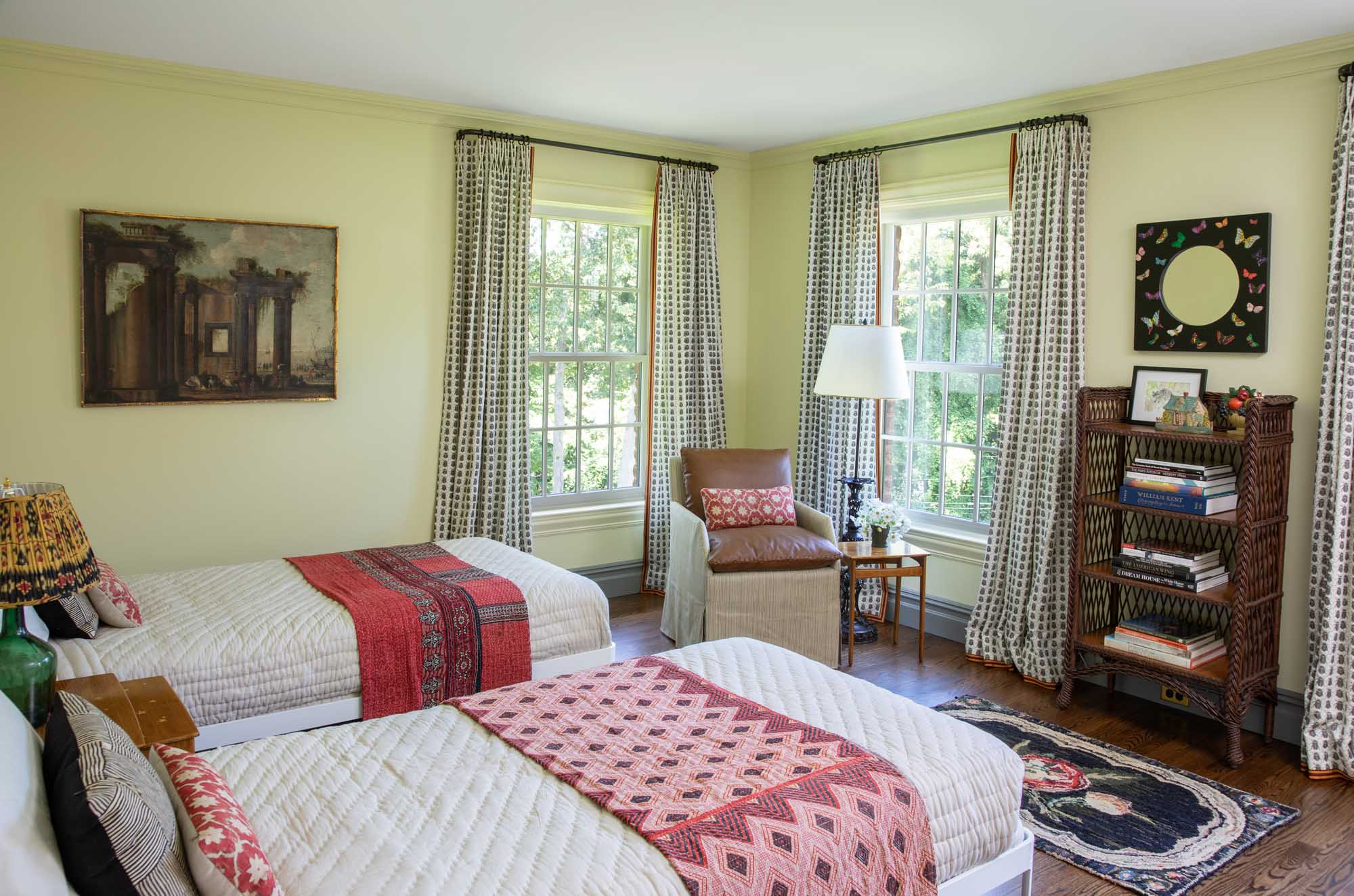 In the basement, the polygonal foundation of the breakfast room became a fantastical retreat from the adjoining playroom. A damask wallpaper from Adelphi Paper Hangings is used with rich textiles and a 19th century mirror. 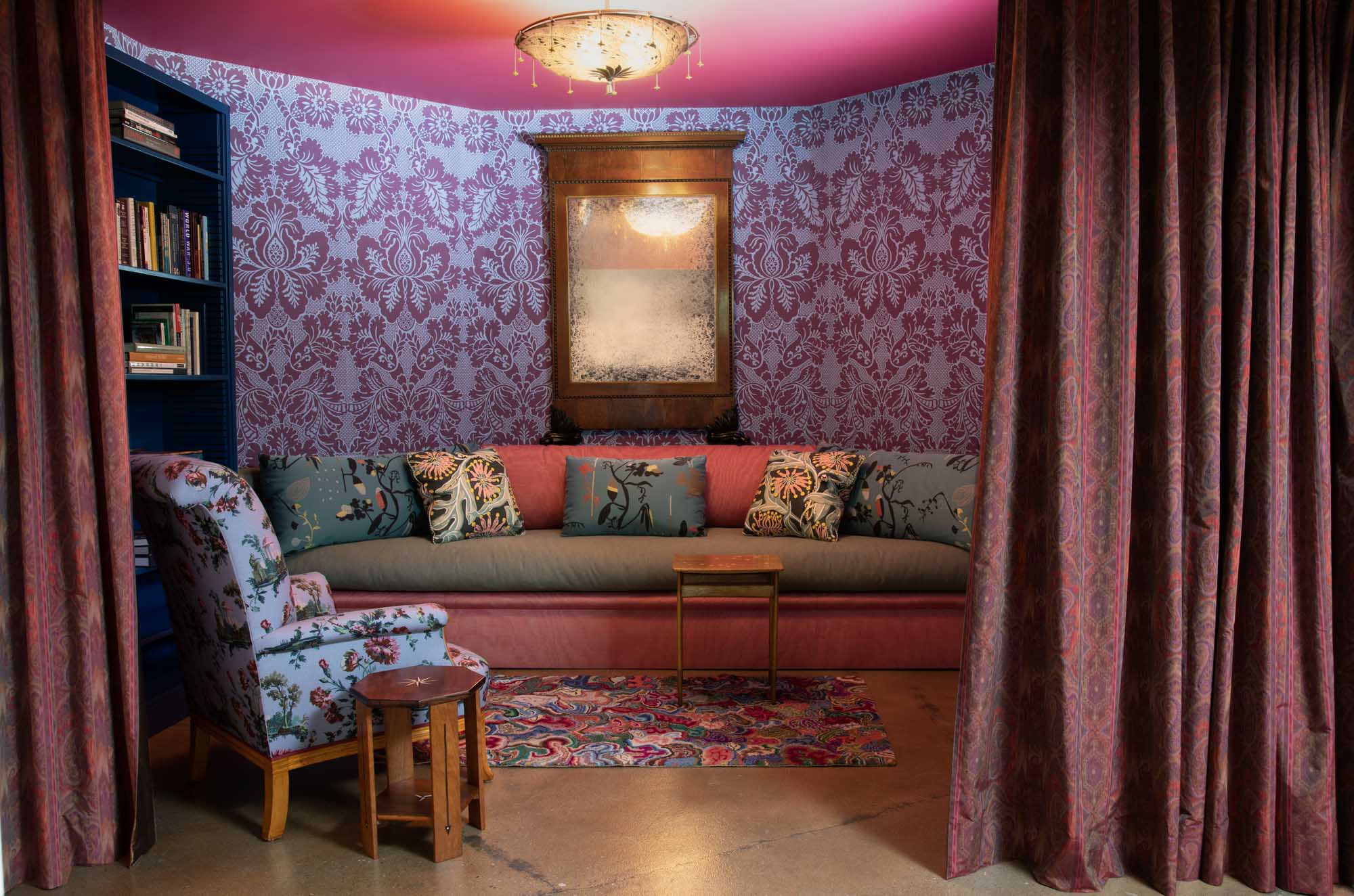