This Montana lodge used for vacations and entertaining guests was built originally in the 1980s and the stereotypical “lodge” decoration looked dated. Jayne Design Studio was commissioned to enhance the visitor’s experience and harmonize the disparate parts of the expansive structure and make it suitable for a contemporary family and their wide circle of friends. 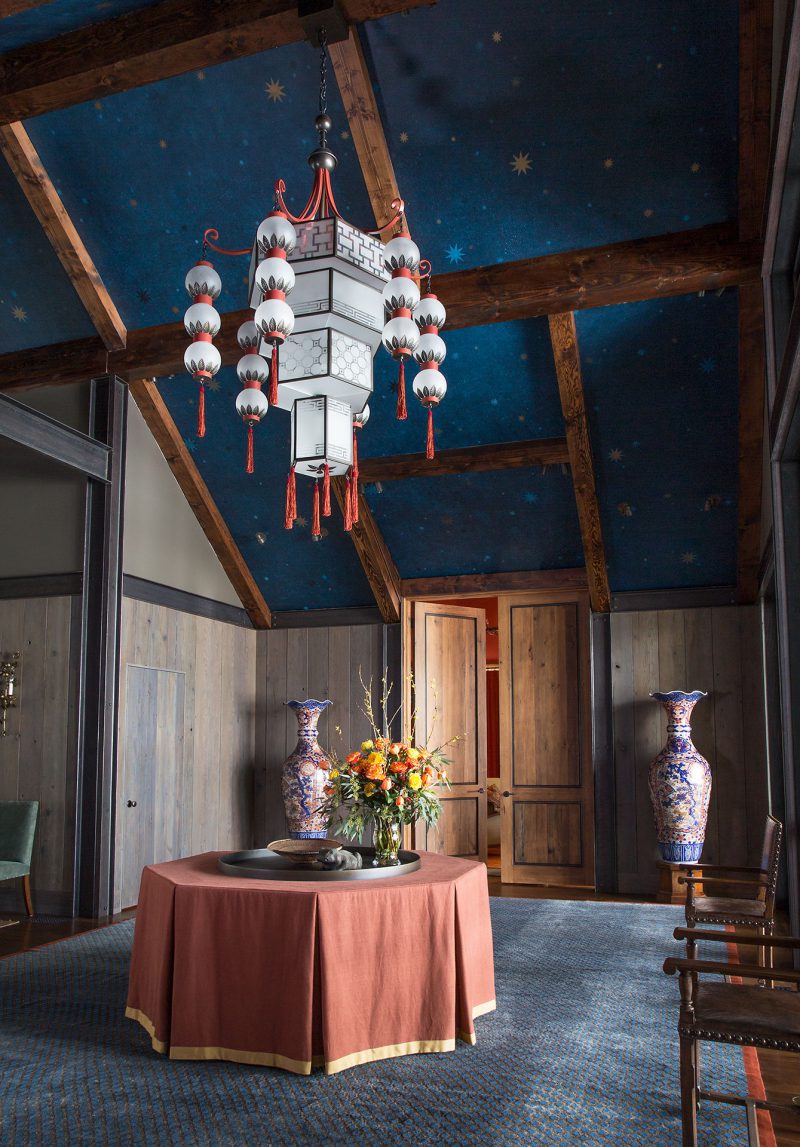 For our inspiration we looked back to earlier Montana houses in the late 19th and early 20th century; we wanted to honor the rustic character of the setting but also bring an element of refinement and luxury that those earlier homes had. The elaborate and graceful front hall with painted night sky ceiling is a welcome and somewhat theatrical surprise for arriving visitors after a long journey down a dirt road to reach the property. The large Amari jars that flank the doors were originally used in the movie “Annie” and were placed on pedestals to give them even more height. The chinoiserie style lantern suspended from the central timber beam was designed by Jayne Design Studio.

One of the more complicated but highly successful design changes was increasing the height of the door openings for grander and more graceful proportions. Marissa Stokes was the project decorator. 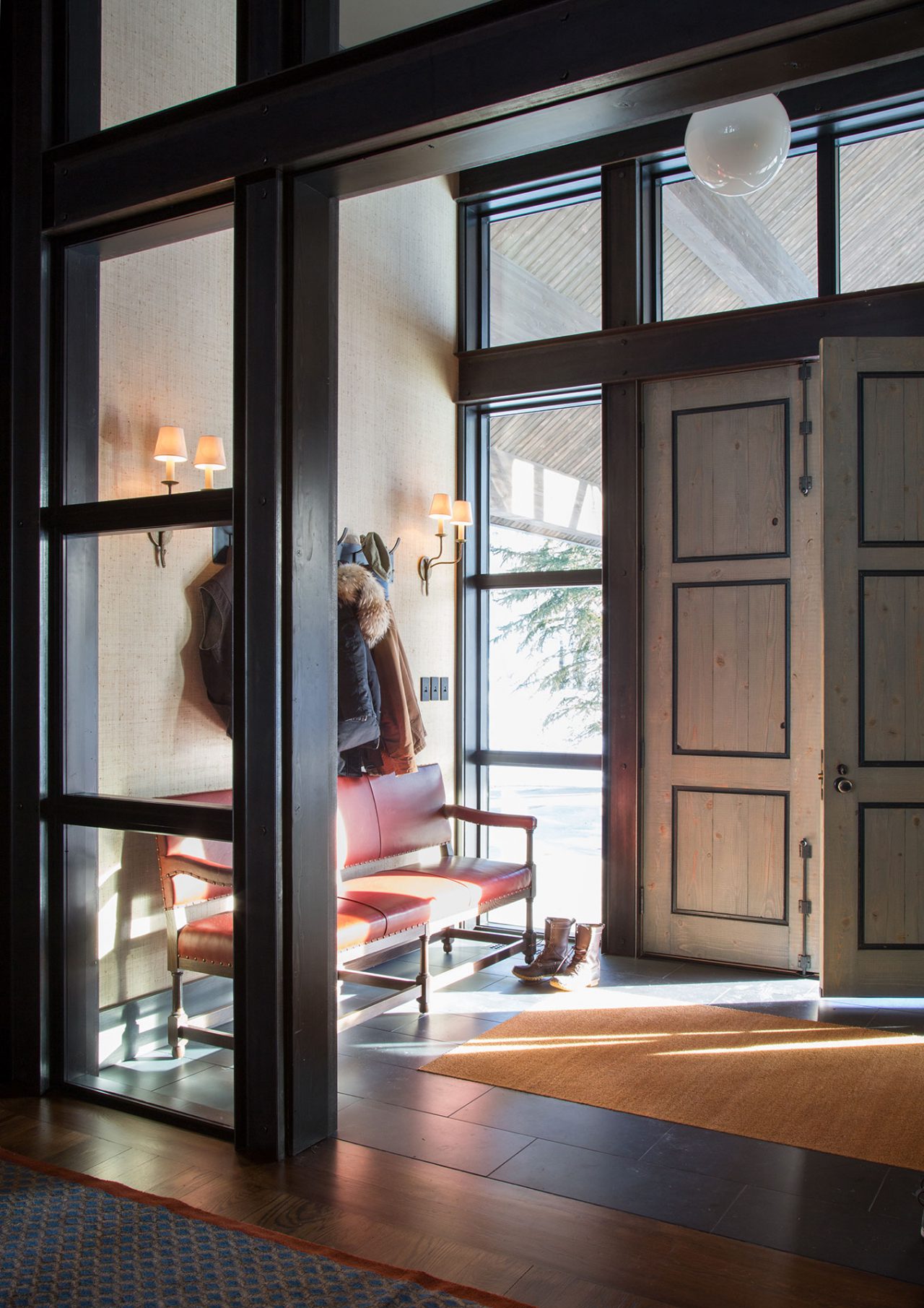 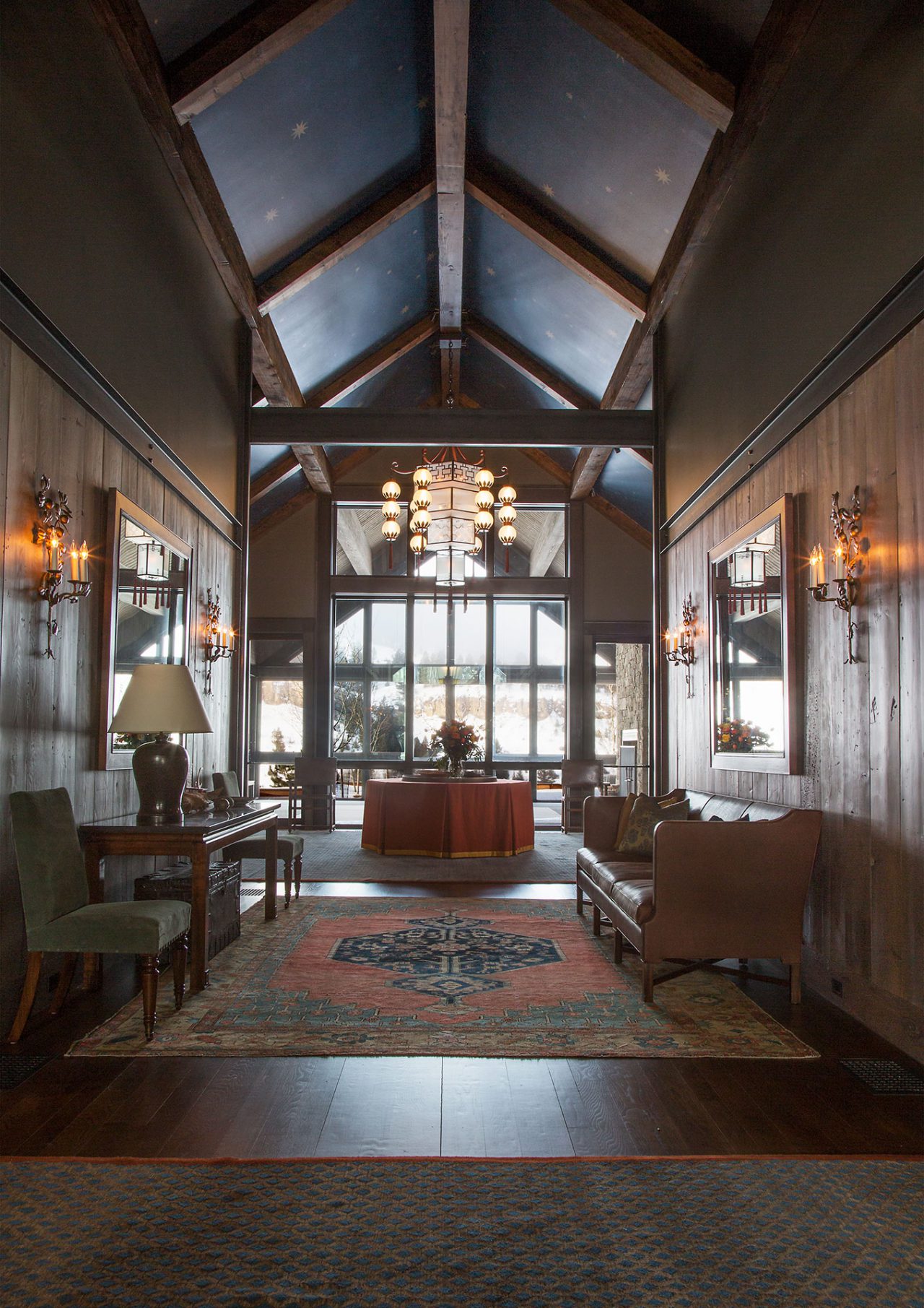 The grand and welcoming entrance hall

The dining room is a refined space for formal entertaining. The focal point of the room is the stunning églomisé fireplace surround created by artist Miriam Ellner who drew inspiration from grasses of the region. The chairs are by Howe and the beautiful Persian carpet in soft tones was sourced by Nazmiyal and is turn of the 20th century. 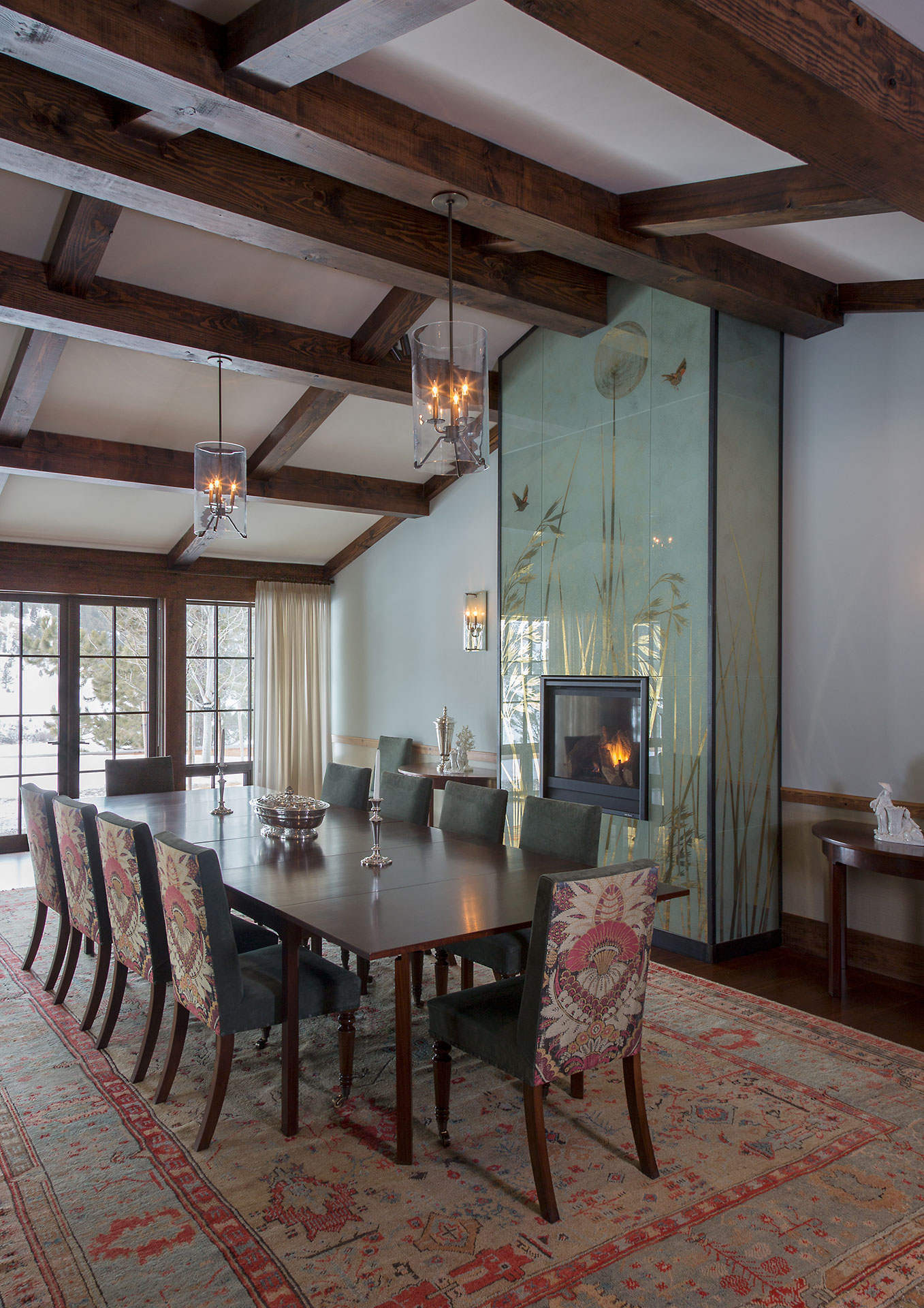 Elegant Jayne Design Studio designed light fixtures work with the rustic character of a Montana lodge but introduce the clean lines of midcentury lanterns that they were inspired by. 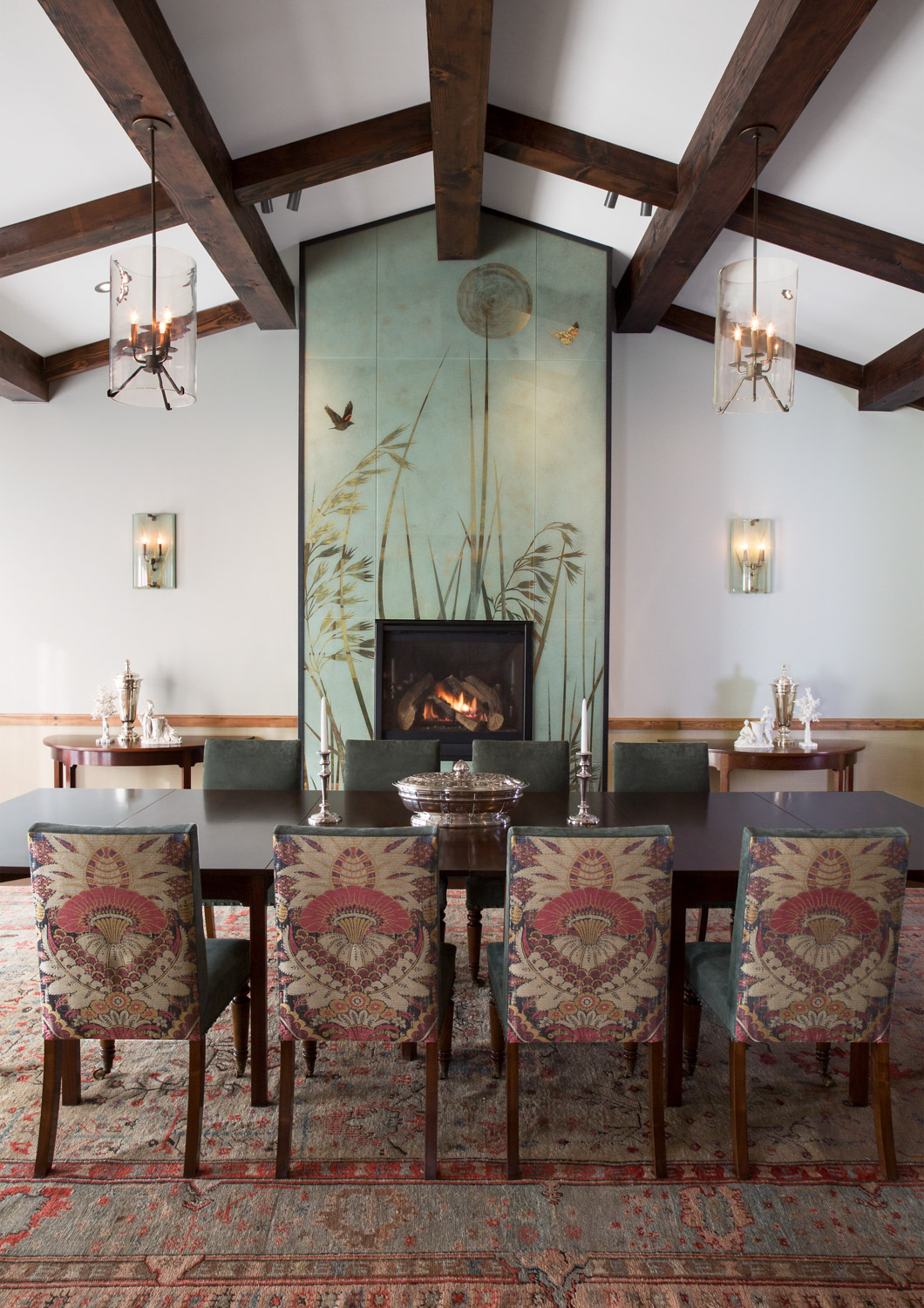 Tooled leather decorates the wall in this hallway where African tribal spears from the clients’ collection flank a wooden chest. This hall was divided into sections to provide rhythm as one transitions from one space to the next. 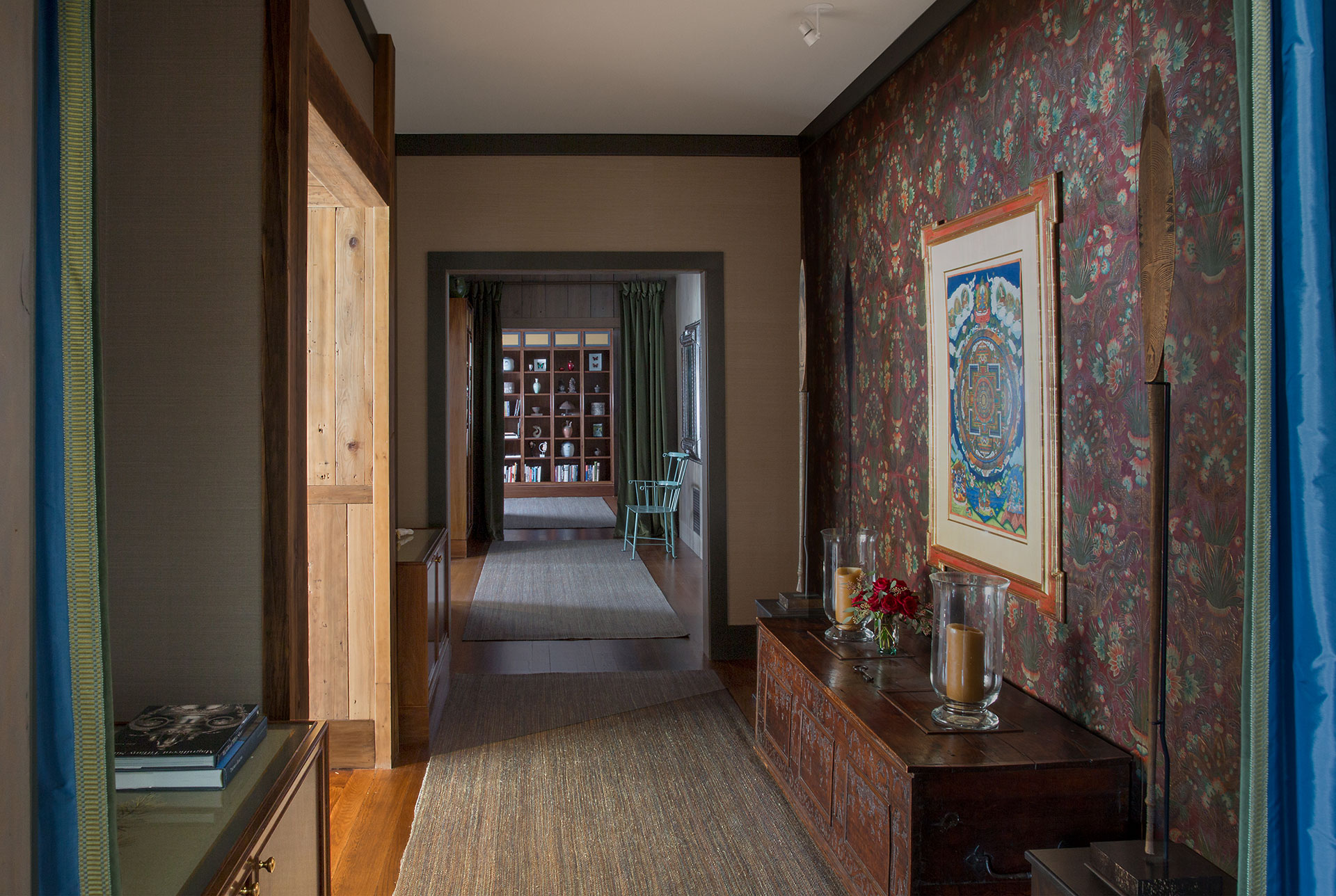 Known as “the red room”, this handsome room lined in red wool is used for receptions, for guests to gather before dinner, and occasionally for family dinners. The chandelier is by Paul Ferrante and the carpet is from Nazmiyal. The stools are 19th century and the club chairs are by Jayne Design Studio. 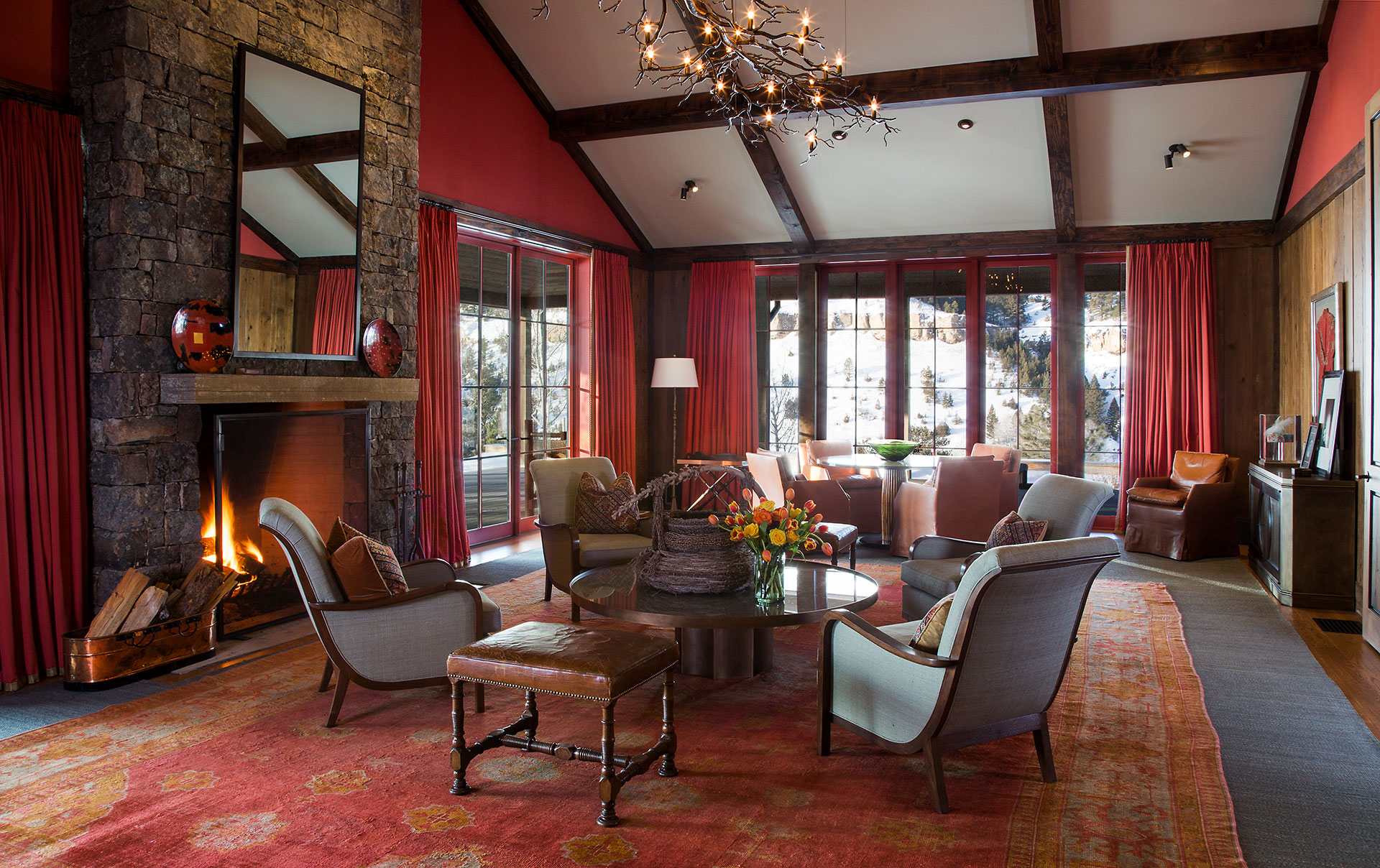 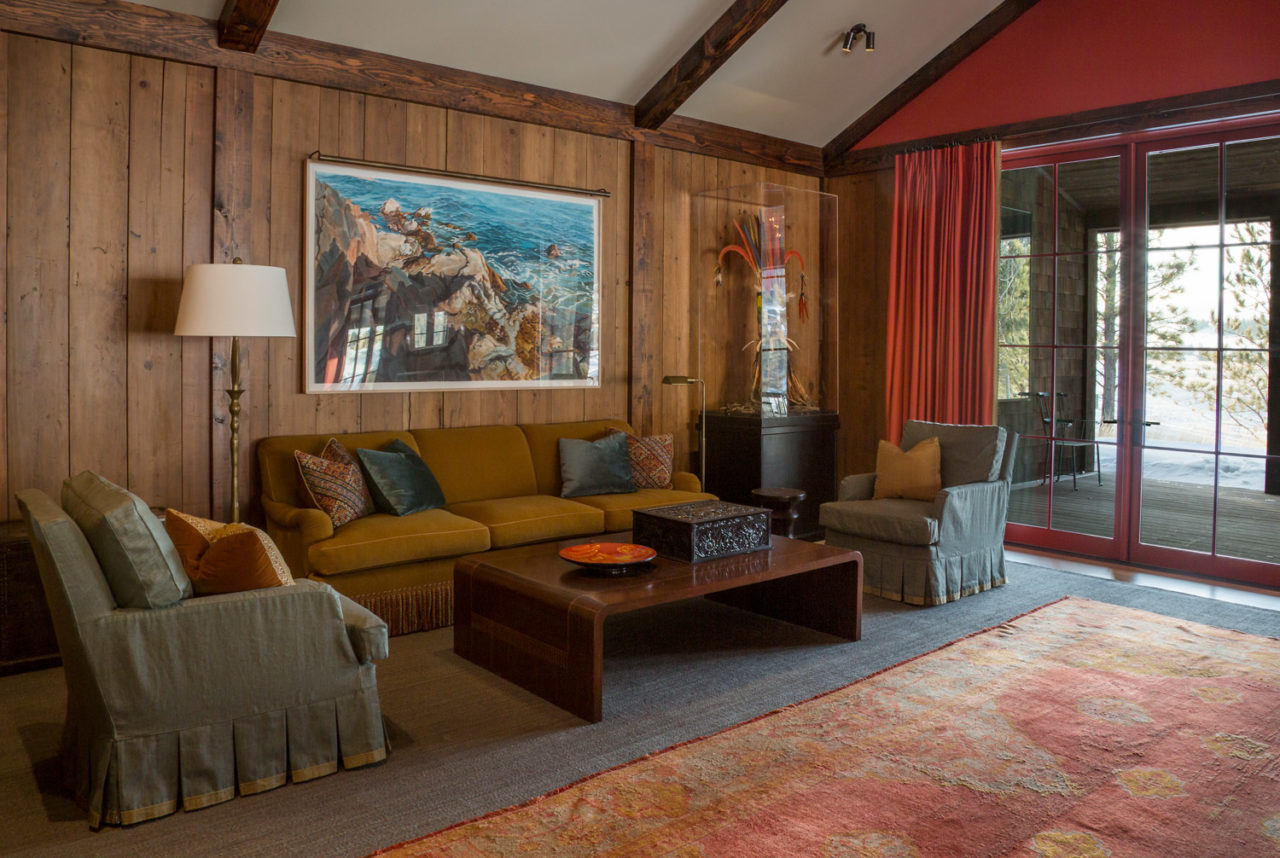 On this end of the room, a comfortable seating area surrounds a unique coffee table that is inlaid to resemble fringe. The chairs are based on a model by Jansen for the Duke and Duchess of Windsor and the velvet couch, also unexpected in a ranch, makes the room feel even more luxurious.

This small dining room is used for less formal occasions with smaller groups. Golden brown leather chairs by Saladino are complemented by the blue rug. The unique spherical light fixture is custom colored and made by Ferrante. Red windows set off incredible views of the surrounding landscape. 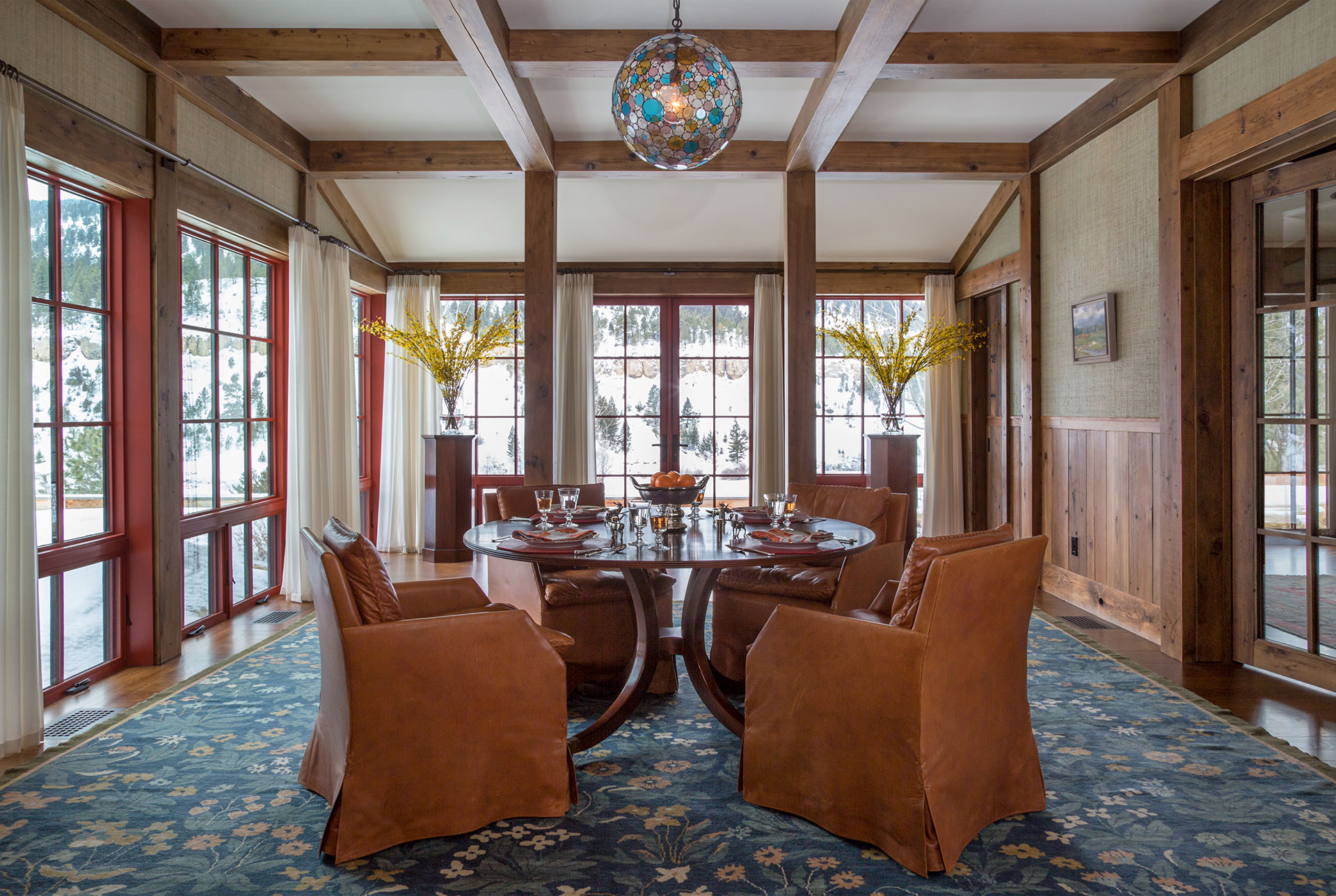 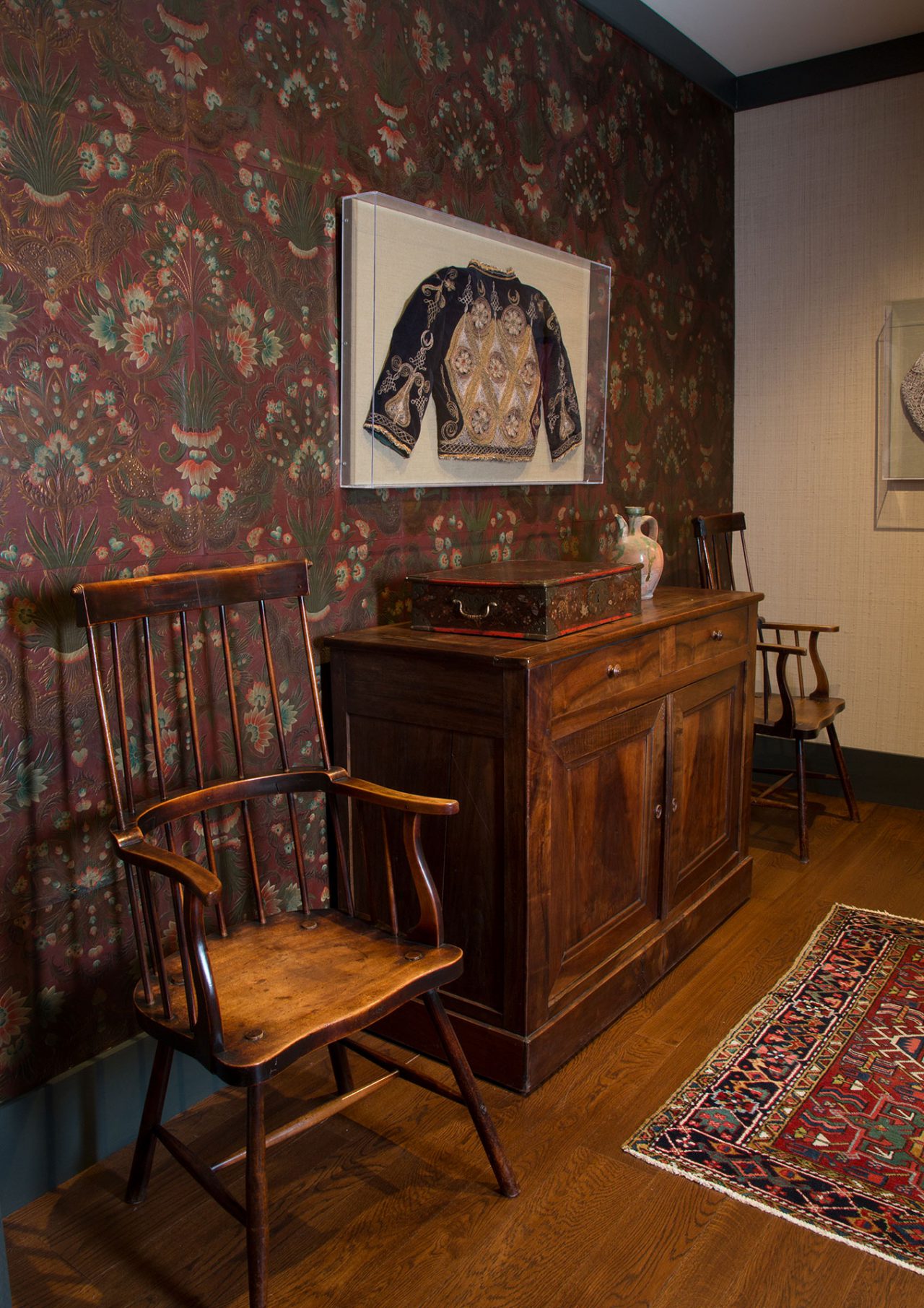 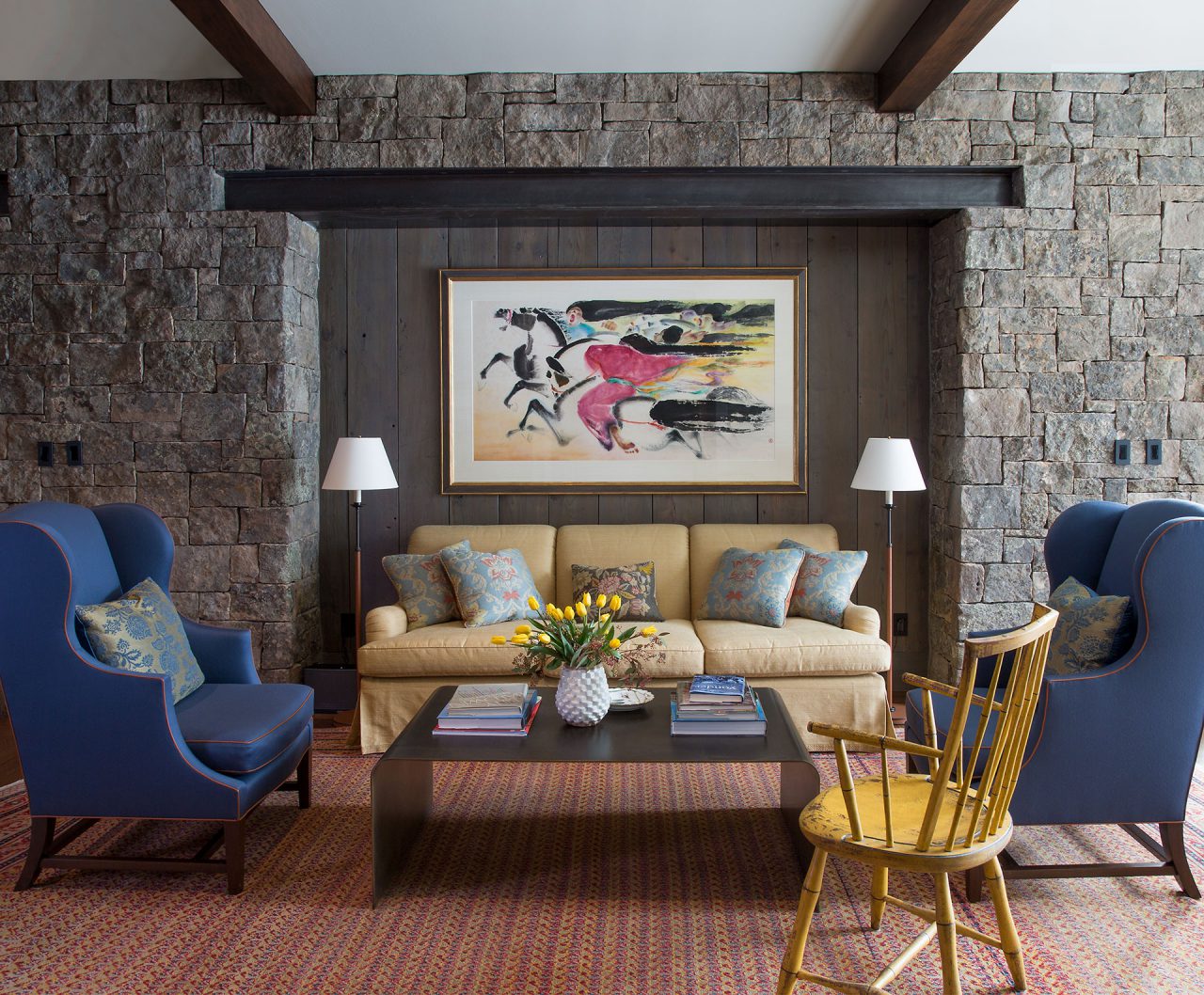 In the hall, we created the niche to offset this sitting area and make it feel more cosseted and cozy. Here we used Georgian style wing back chairs, atypical in the west, in a strong blue to provide a sculptural element with their beautiful forms.

The “camp room” was an original space in the ranch in which we added more windows to take in the magnificent views. Of all the rooms in the house, this room pays the biggest homage to traditional “ranch” décor. (There had to be a bison head somewhere, right?) Reclaimed ceiling boards add texture and rusticism to the cavernous space which is mainly used for parties and events—flexible seating arrangements can be moved to the sides of the room when needed. 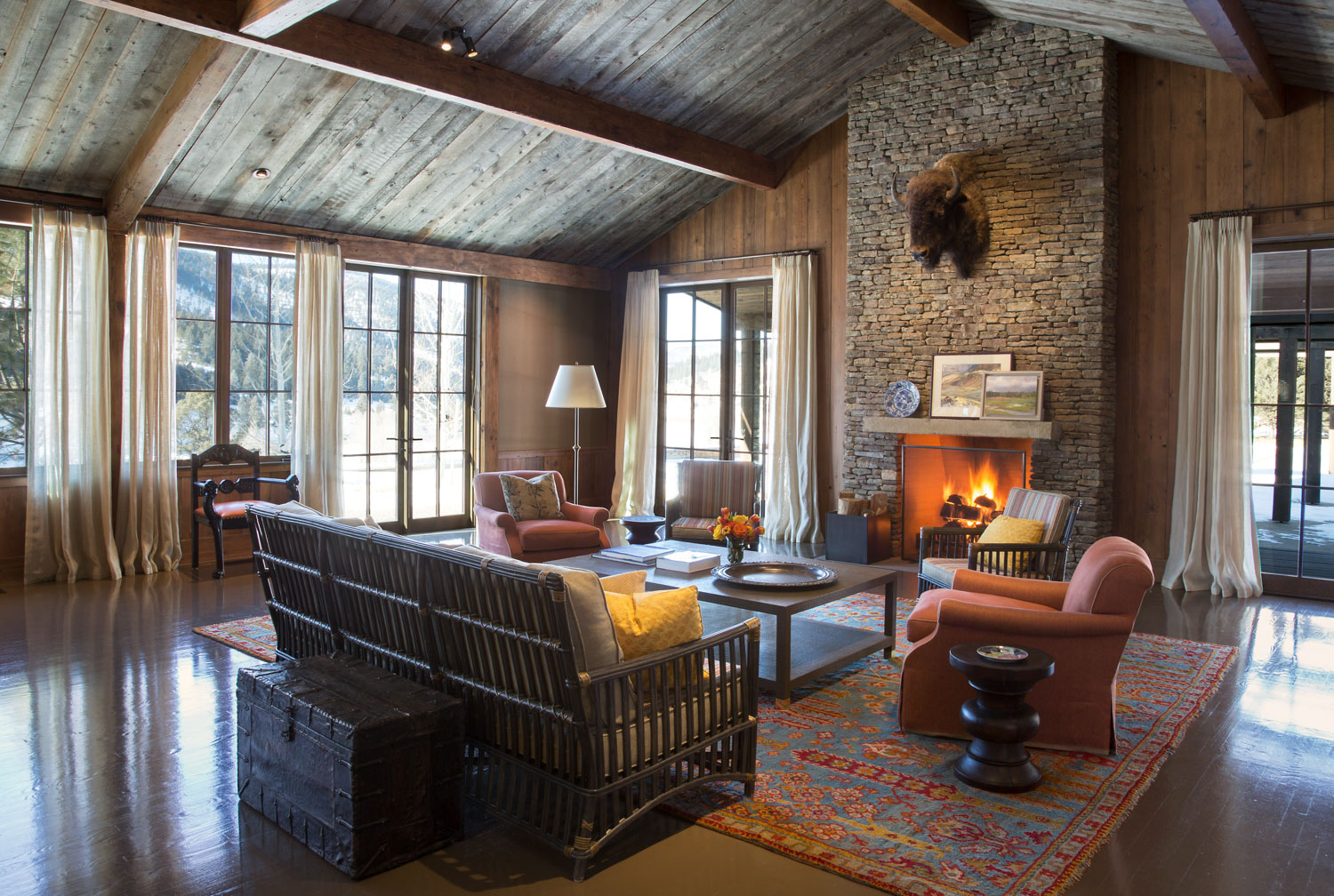 An earth-toned palette with dark wood accents in the powder room feels traditional without being too old fashioned. 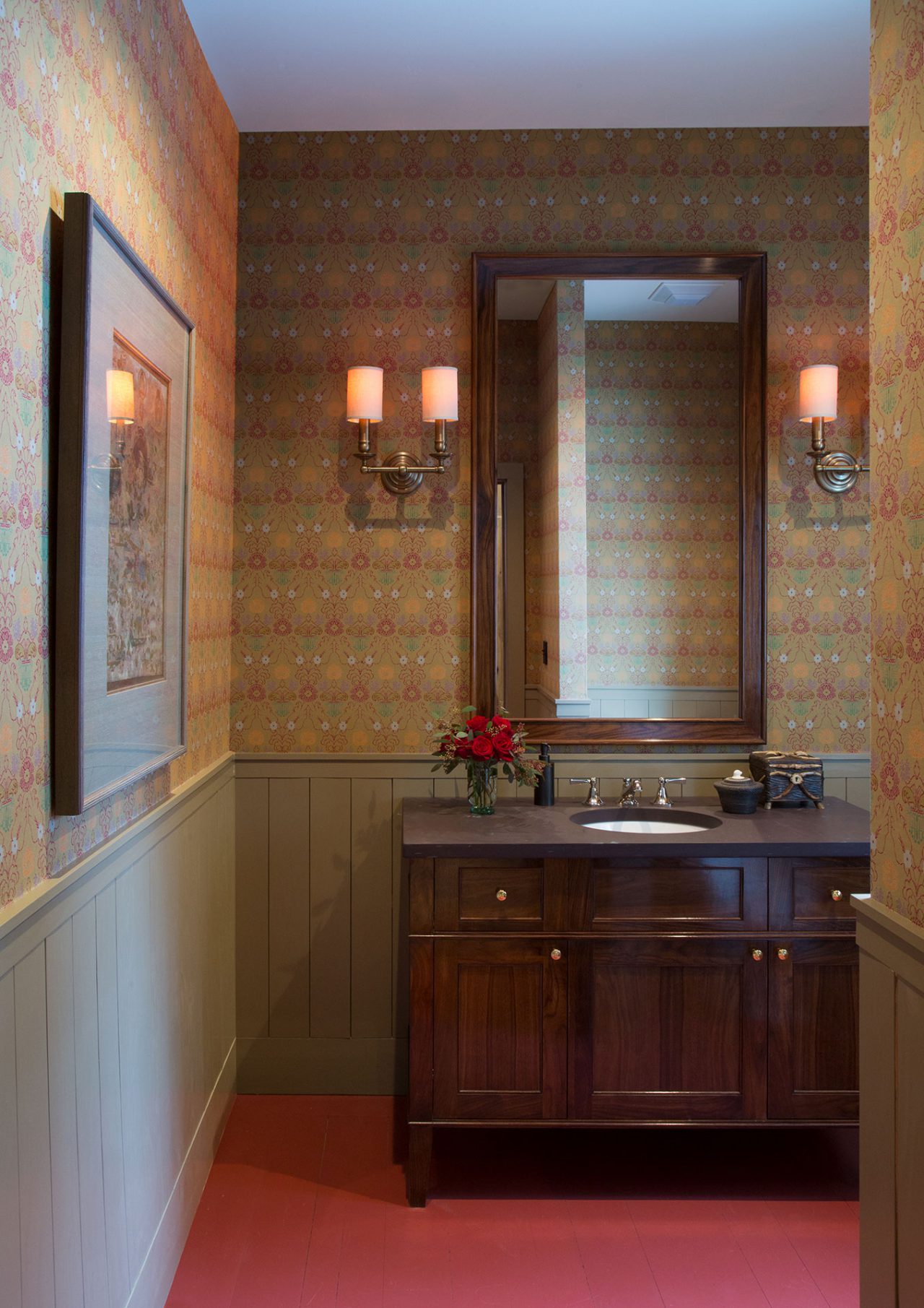 The camp room features a mural by artist Mark Beard of native Montana flora and fauna and a unique plaster chandelier by Stephen Antonson. The lichen green painted oak floor grounds the space and helps bring the outside in. 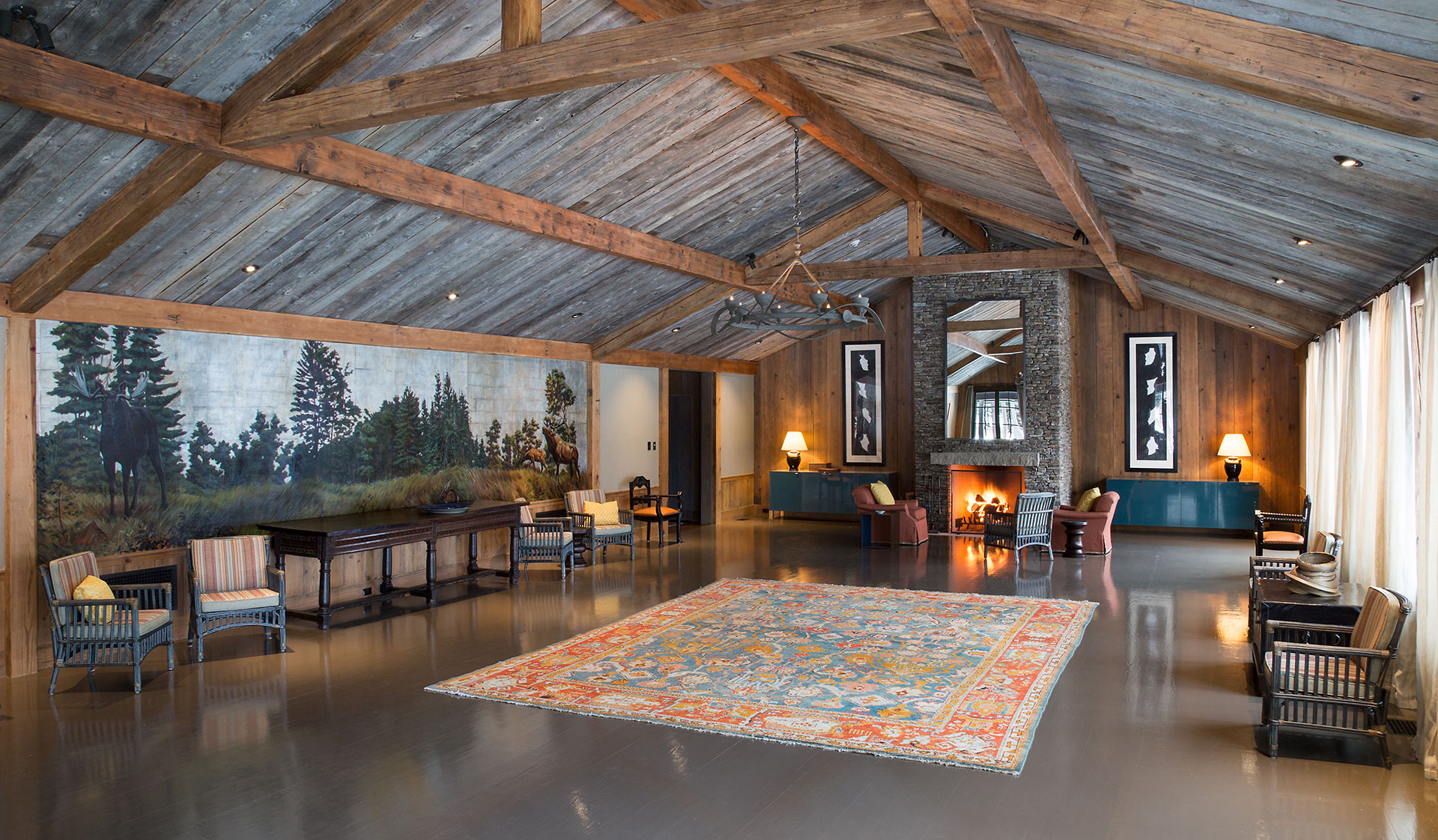 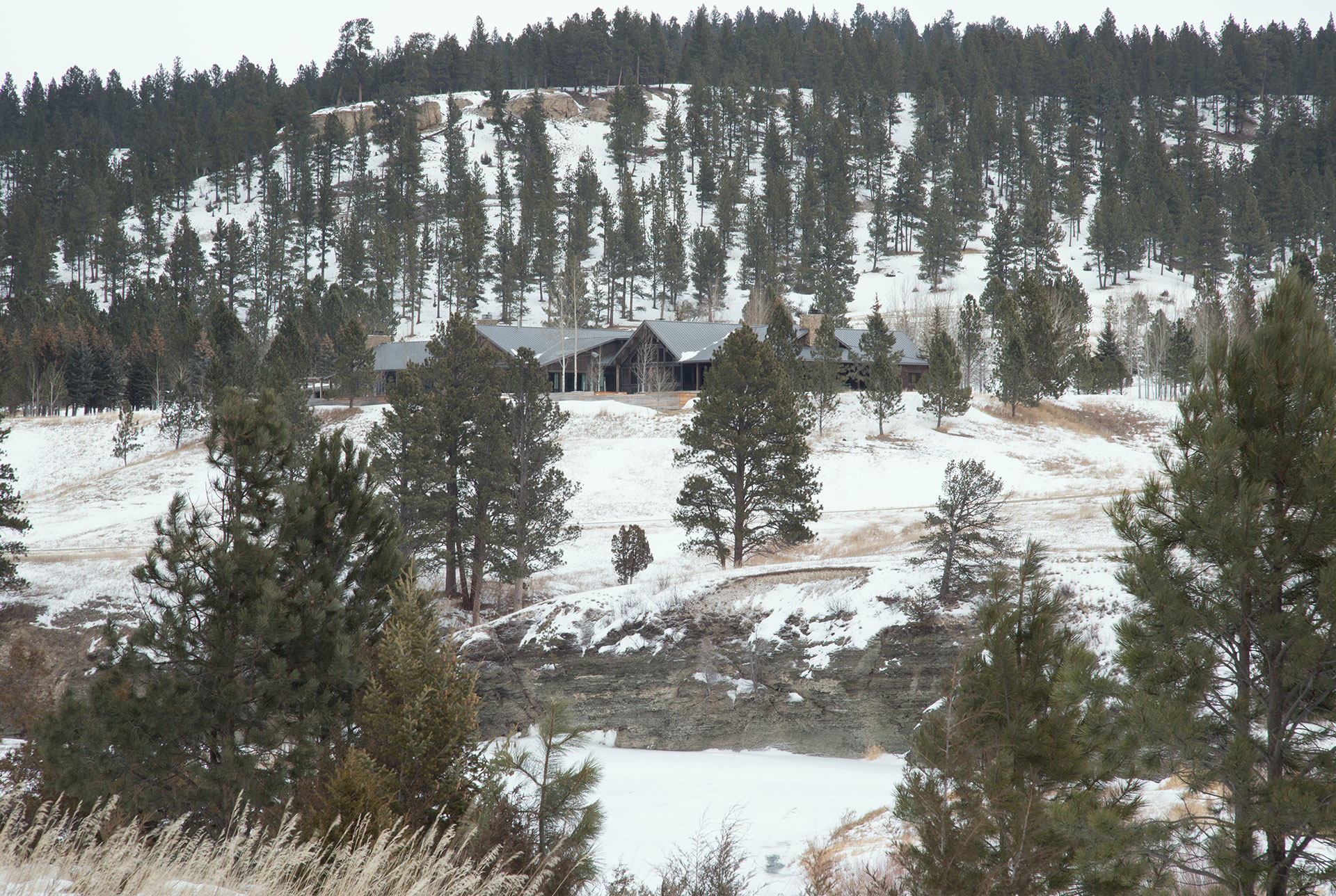