The archetypal idyllic beach house—small and straightforward—has a particular hold on our imagination. There is something about its scale and simplicity that conjures the perfect and carefree summer day. This beach cottage captures the essence of this ideal. It has just four small bedrooms, a sitting room, a dining area, a galley kitchen and, what really makes the house work, the quintessential summer porch—a place where most of the action occurs.

The porch has blue window frames and a large daybed with piles of pillows designed especially for the children of the family and their friends to lounge upon. A bright red wicker chair is one of several pieces that came to the new owners with the house. Because of the house’s remote location and limited access by ferry (no vehicles are permitted on Fire Island), there has long been a tradition of buying houses furnished and re-claiming pieces left by previous owners. This adaptive re-use also offered a sense of visual continuity and history as well as added to the relaxed feel of the place. 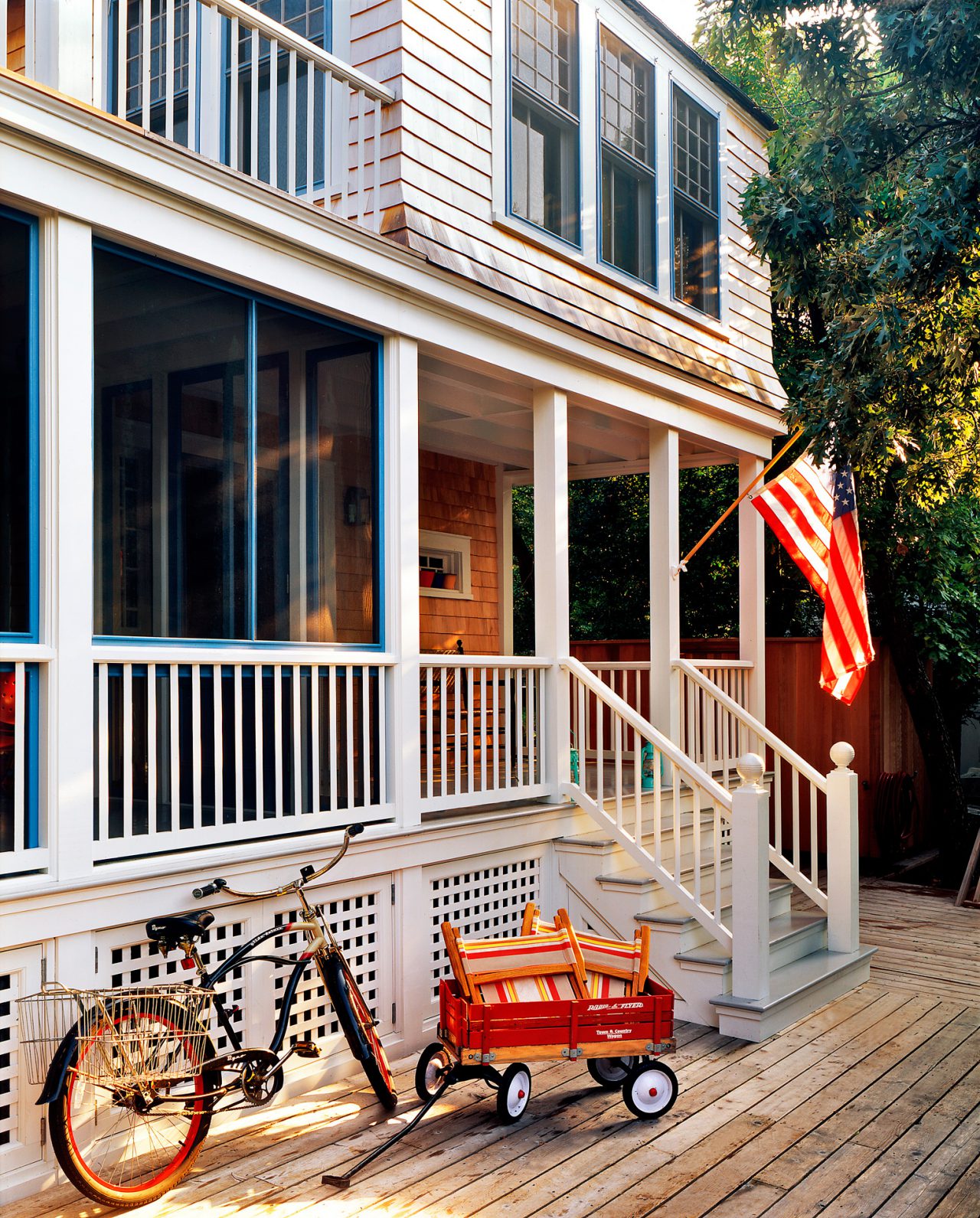 The house was built in 1895 on Fire Island as part of an enclave originally built by a group of intellectuals interested in education and the arts. Peter Pennoyer Architects oversaw its renovation, striving not to make the old house grander, but to save the best features and lovingly restore them for a new generation to enjoy.

Beach houses call for simple but not necessarily lesser quality furniture. The living room is centered with two chairs of particular note by the great master of the Arts and Crafts, Gustav Stickley, while the custom flat-weave Guatemalan carpet provides an informal texture and palette. 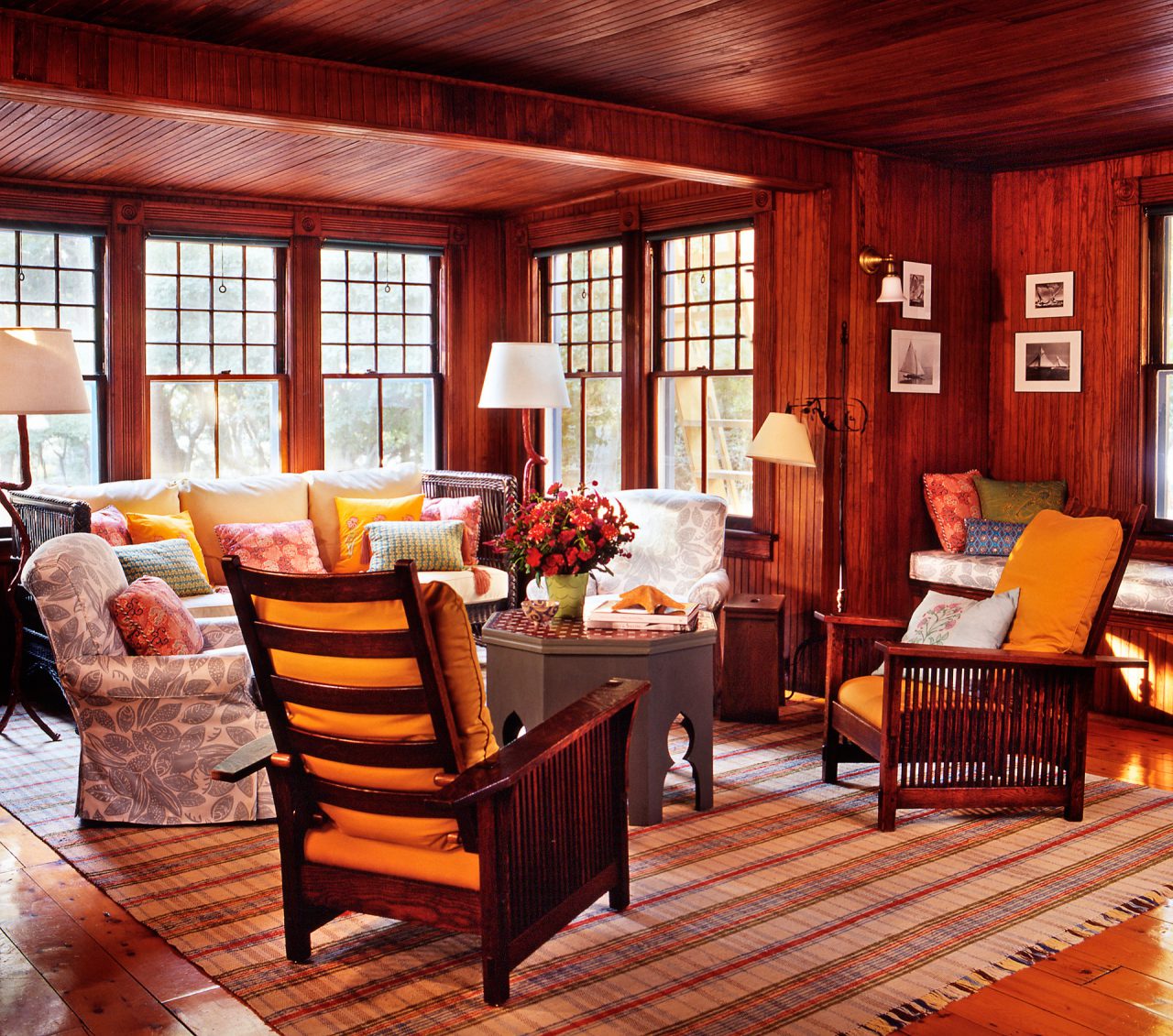 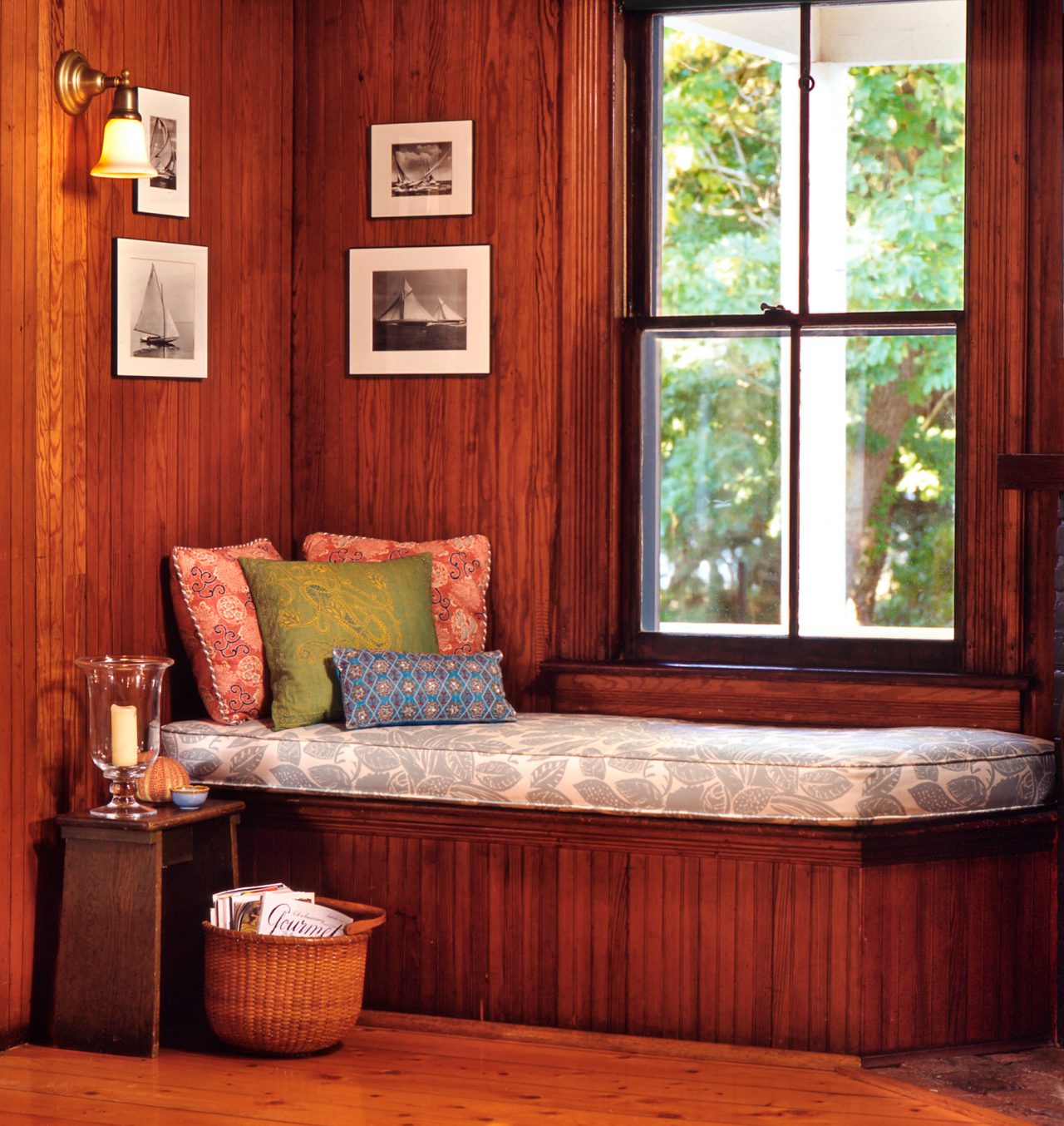 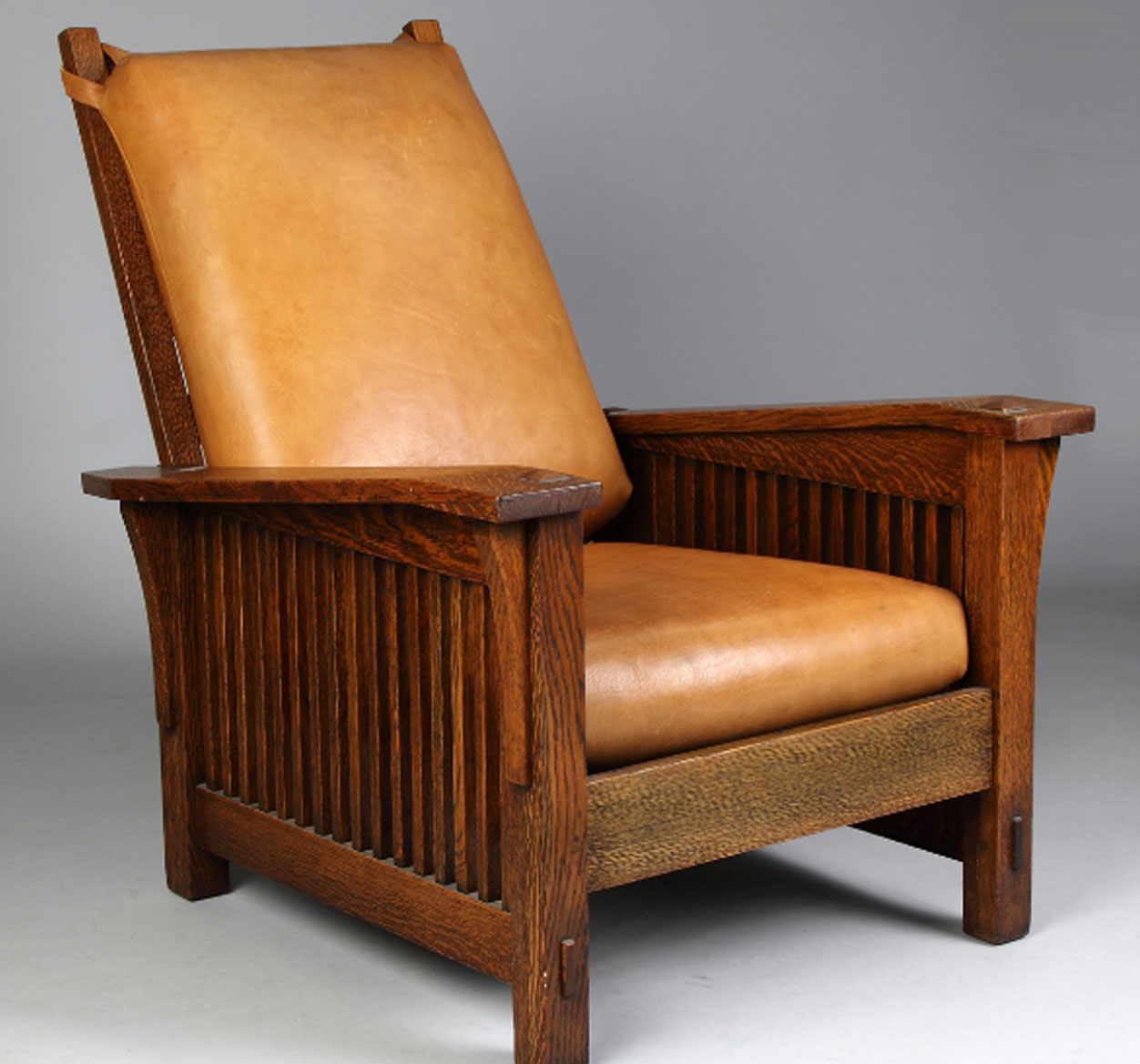 A built-in bench, an original feature of the house, is large enough to double as a daybed. Waterproof canvas fabrics were used throughout as a common-sense defense against wet swimsuits. Stickley’s Morris drop arm chair is a Craftsman style chair popular in the era when the house was first built. Its beautiful wood surfaces echoes the paneling of the living room.

When the owners purchased the house, the wood walls of the shadowy sitting room were a point of contention. Real estate agents and well-meaning friends advised that the walls be painted white to “freshen and lighten the place up.” We countered that the walls were an original feature that give this cottage a particular character. White rooms often have little mystery and darker rooms, with their edges in shadow, can have a sense of expanse. The dining room fully embraces this aspect of the original house. It is enlivened with a painting of beach balls by Donald Baechler and a painted picnic table surrounded by English Arts and Crafts chairs. 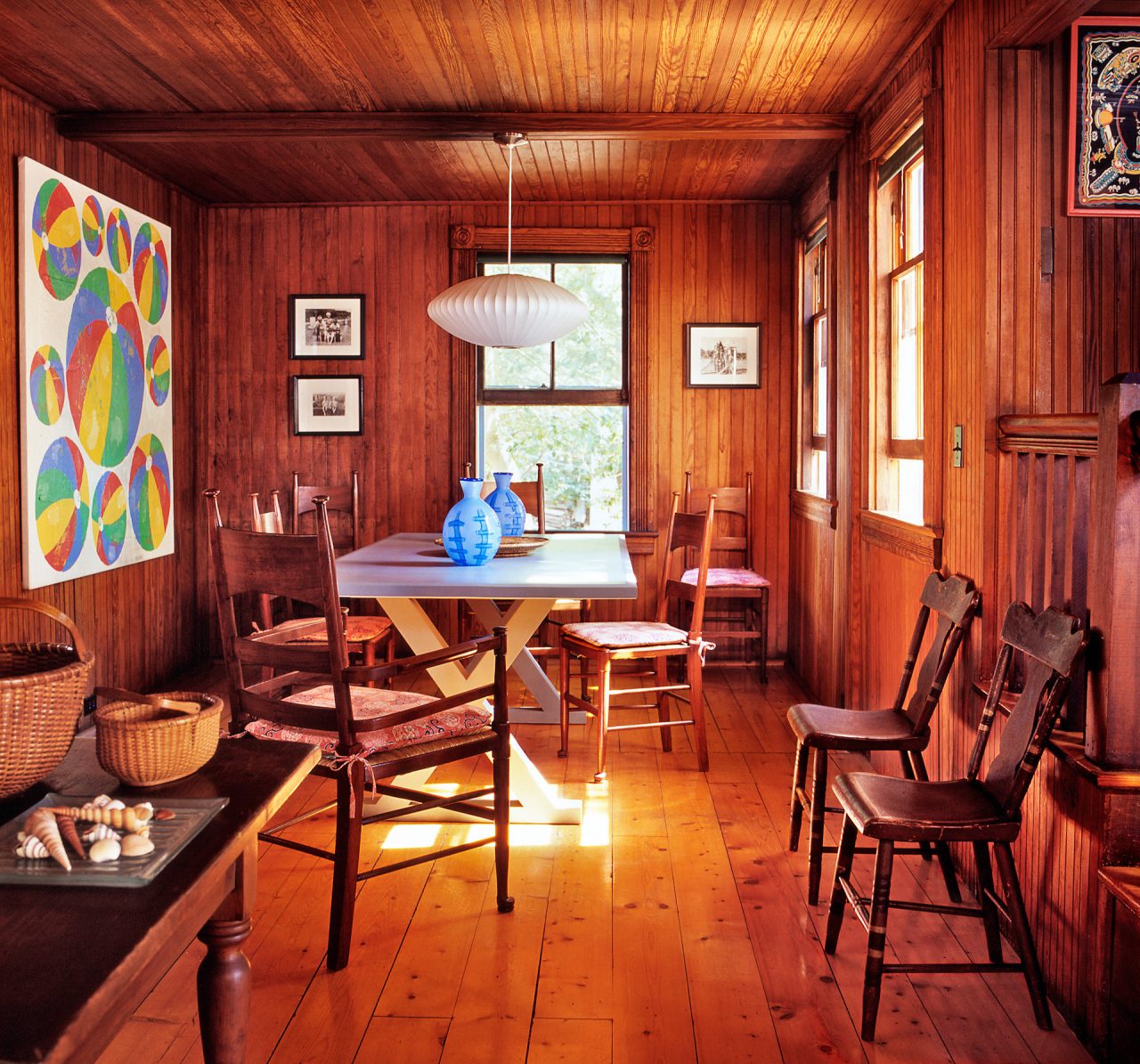 In the rebuilt and slightly enlarged kitchen, some of the existing appliances were retained and old cabinets were copied. Old-fashioned linoleum was used on the counter tops. This room was the exception where the bead board was painted to differentiate it from the living and sleeping spaces.

We are often asked by clients to use a personal object to build the decoration upon. The attic bedroom is a perfect example of this approach. In this case the clients’ daughter selected a tie-dyed bed cover as a mod expression of her identity. Its strong design is balanced by the charming nature of the dormered ceiling and the simplicity of the other furnishings, including a modern chest of drawers by George Nelson and a Keith Haring print.

The blue-painted floor contrasts with the wicker dressing table and pink drop-leaf table, which came with the house. We added details such as the table lamps, the pique-assiette mirror and mid-century hooked carpet to update the decoration. 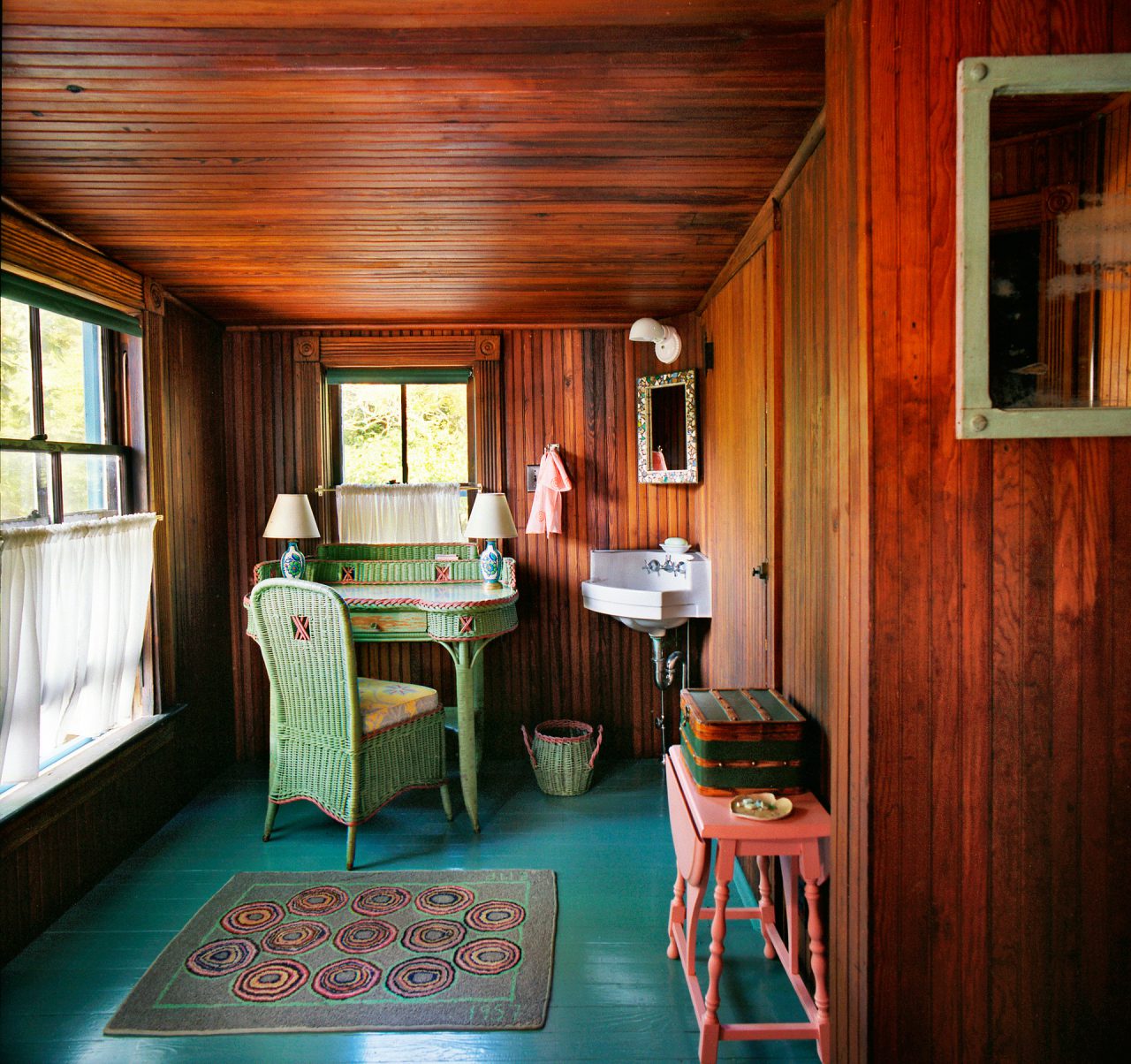 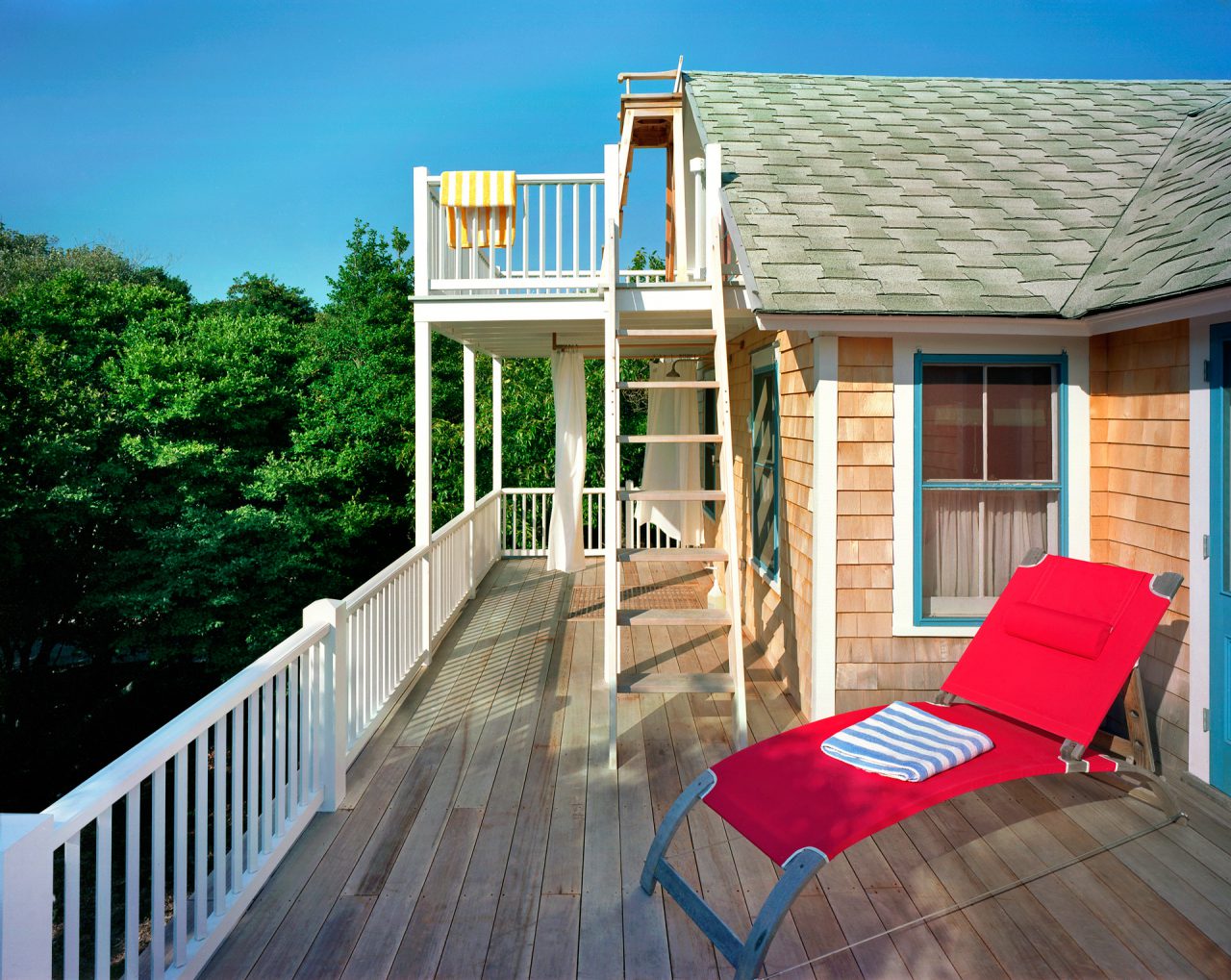 Although the ocean is just yards way, the house has no direct view except for the dramatic view from a “lifeguard” chair on the second-floor deck—a metaphoric demonstration of both the nostalgic and modern use of this classic cottage.
Menu