Our client inherited this pied-à-terre apartment on Beekman Place, along with an important collection of fine art and furniture. The apartment is located in an elegant riverfront building developed in 1930 by the Rockefeller family and designed by Sloan & Robertson, with Corbett, Harrison & MacMurray, the firm that was also building Rockefeller Center. Completed just as the Great Depression descended on the city, the suites were graciously planned yet not ostentatious, and the architectural detailing is spare, reflecting the Art Deco movement and perhaps the economic climate as well.

Throughout the apartment, the subtle but noteworthy play of pattern unifies the space, creating enough decorative support to complete the interiors without competing with the works of art. Pierre Finklestein’s strié paint work in the principal rooms played an important part in this, the texture so fine that they are imperceptible until closely examined. This infusion of color also firmly establishes that this is a private home rather than an art gallery. The living room features pieces from the clients’ important collection of art, including the large Rothko seen over the console. The decorative arts have equal weight with pieces such as the large Swedish urns by Ivar Johnsson serving as side tables and an important waterfall coffee table by Philip and Kelvin Laverne. 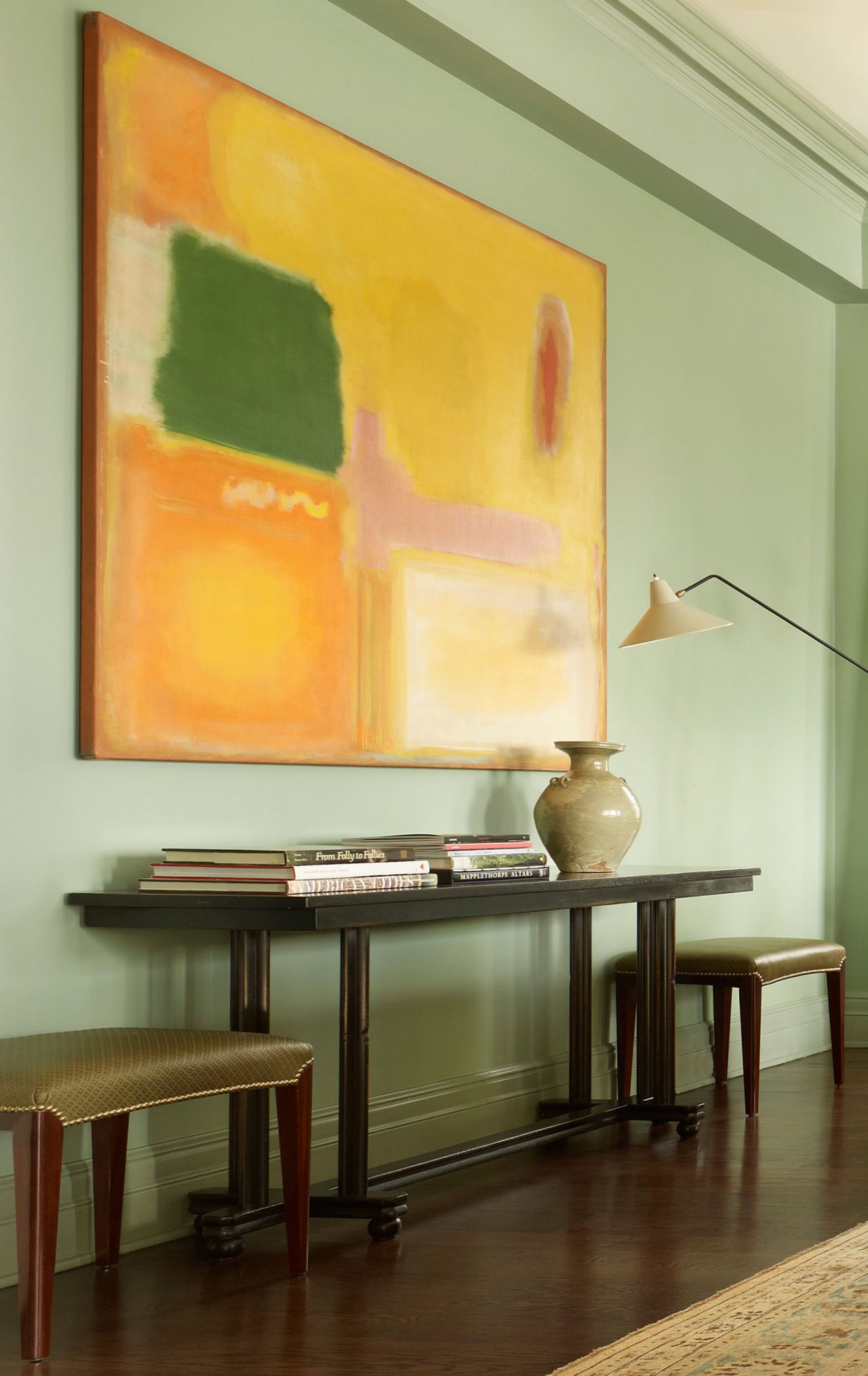 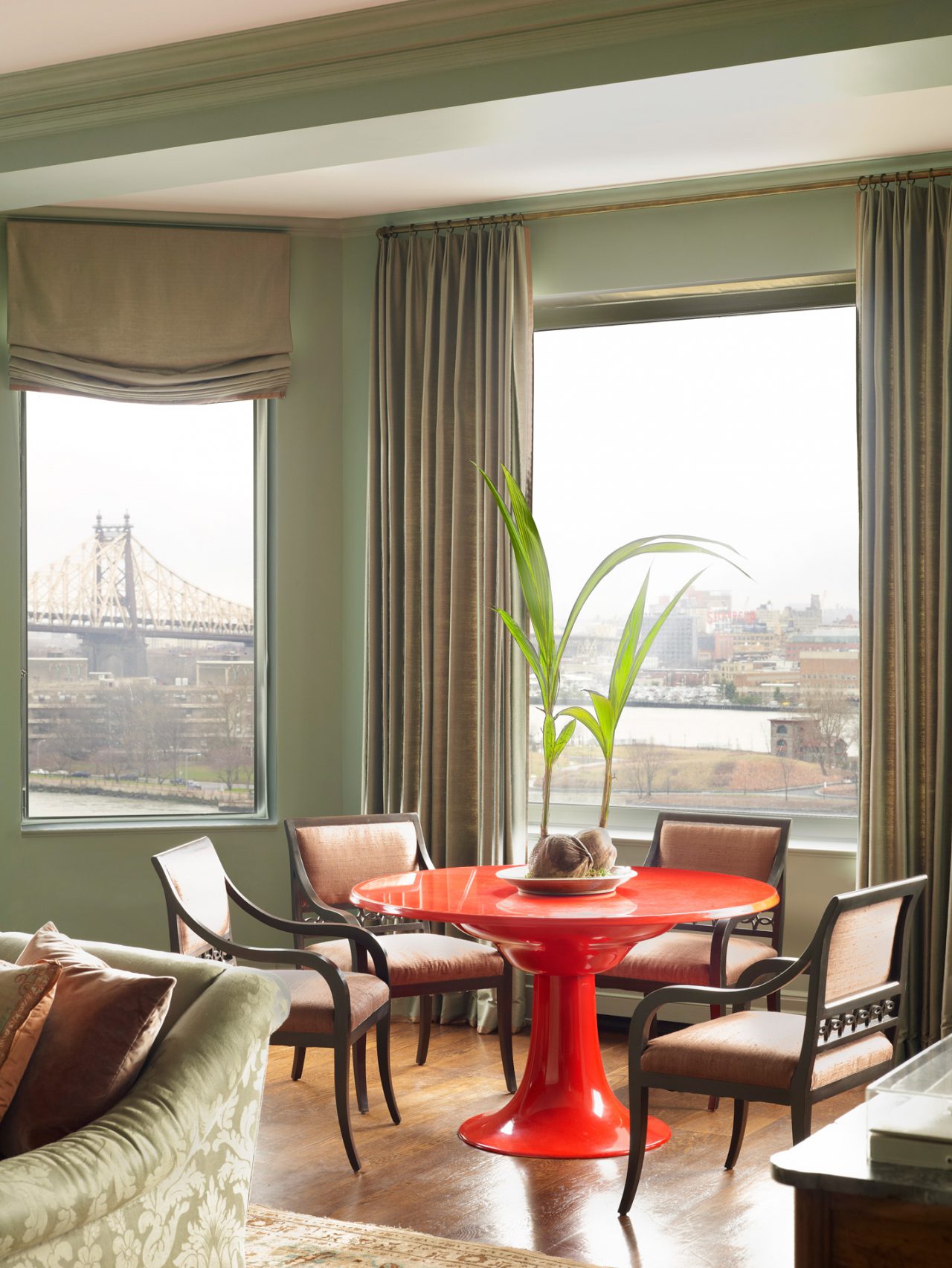 At the end of the living room, a bright red table by Otto Zapf serves a dynamic counterpart to the quieter furniture in the room. It sits in a bay window with views of the East River. It provides just the right jolt of color — an exclamation and focal point at the same time. Rothko’s color field painting on the opposite end of the room serves a similar purpose.

This relative simplicity served as the perfect foil for the art collection, which spans the history of 20th- century painting and is classically juxtaposed with ancient artifacts. A prime illustration is the library, where a portrait by Picasso is the focus. The bookshelves are filled with antique and vintage books on art as well as pre-Columbian artifacts. 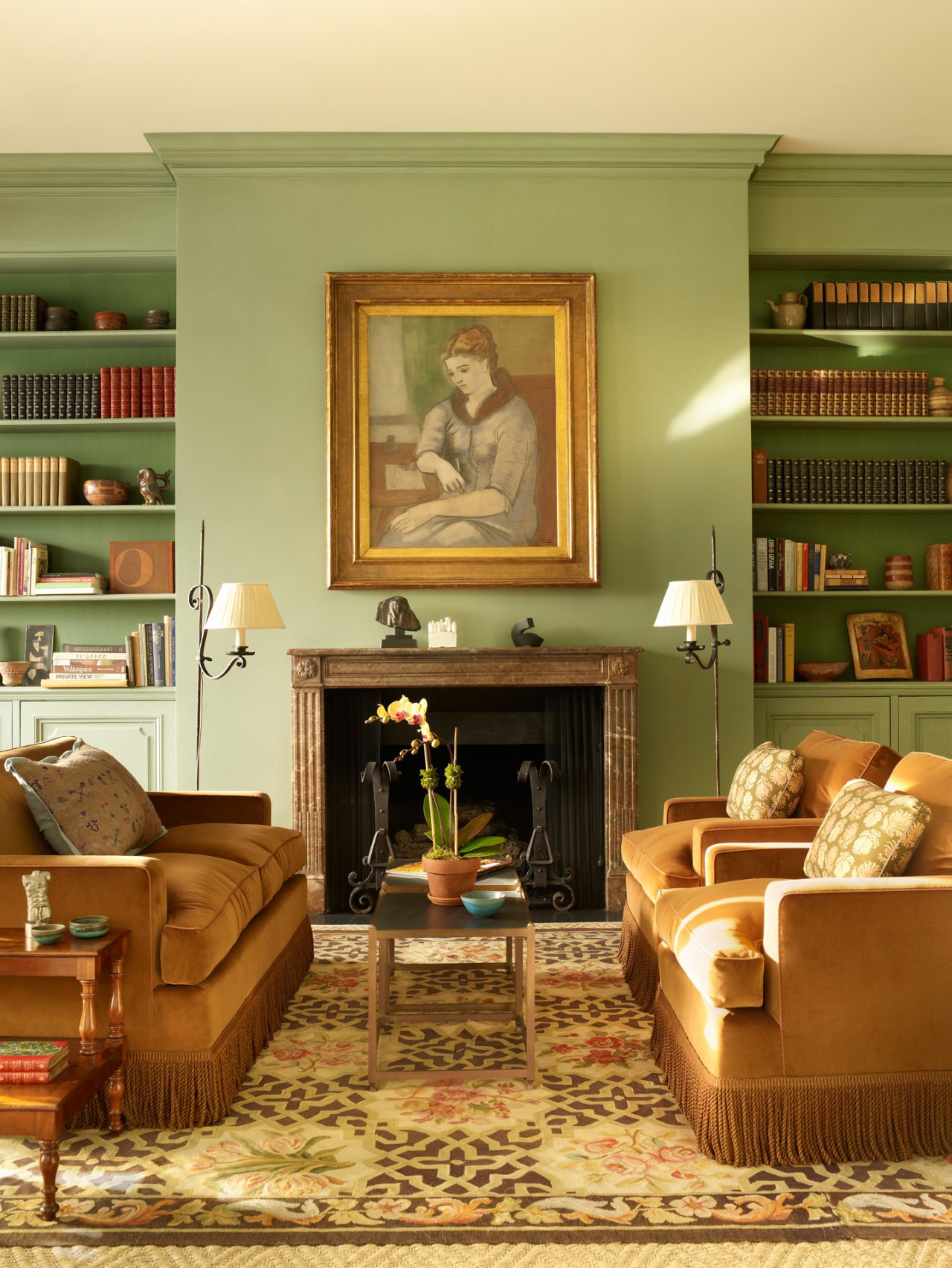 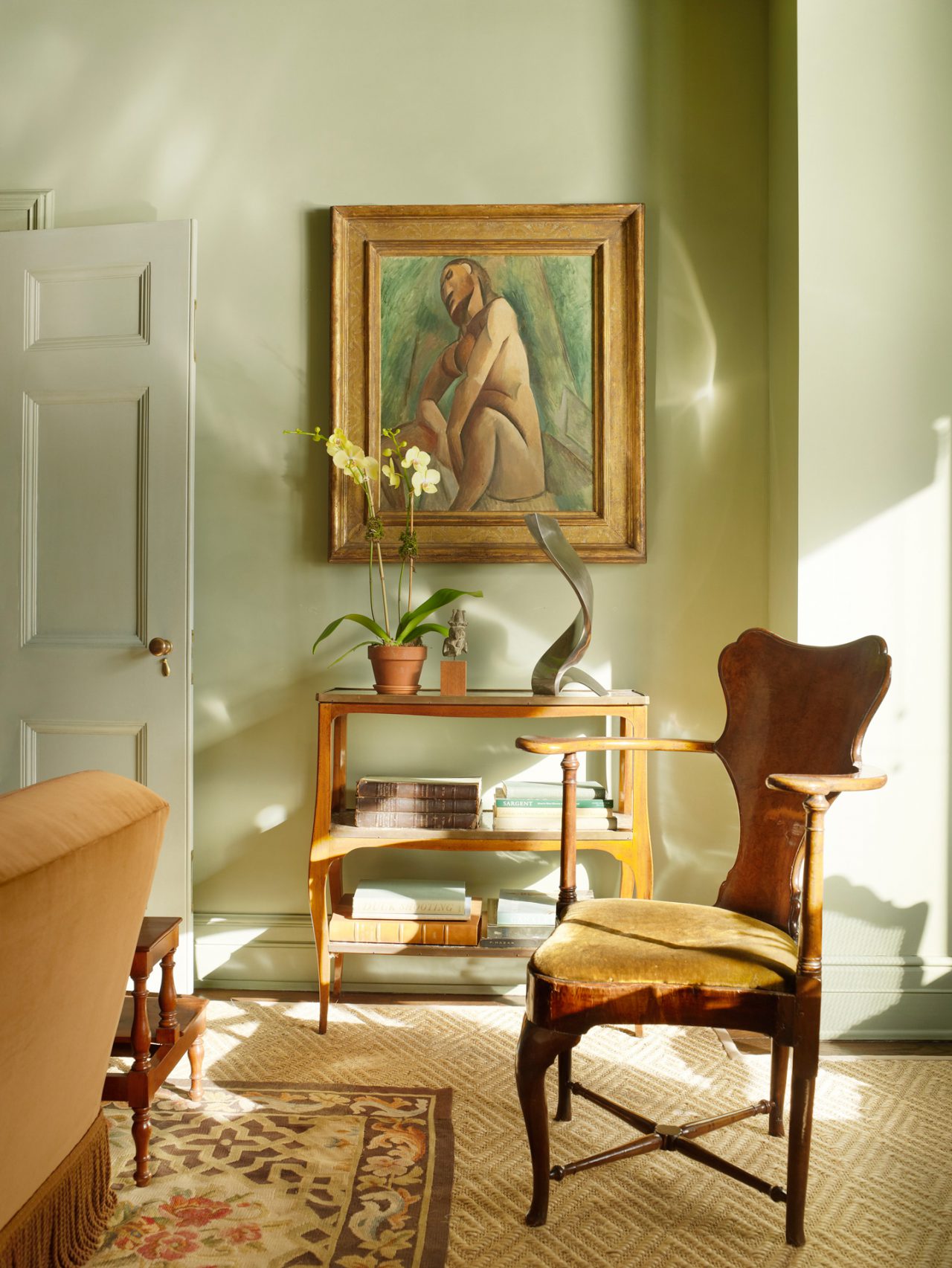 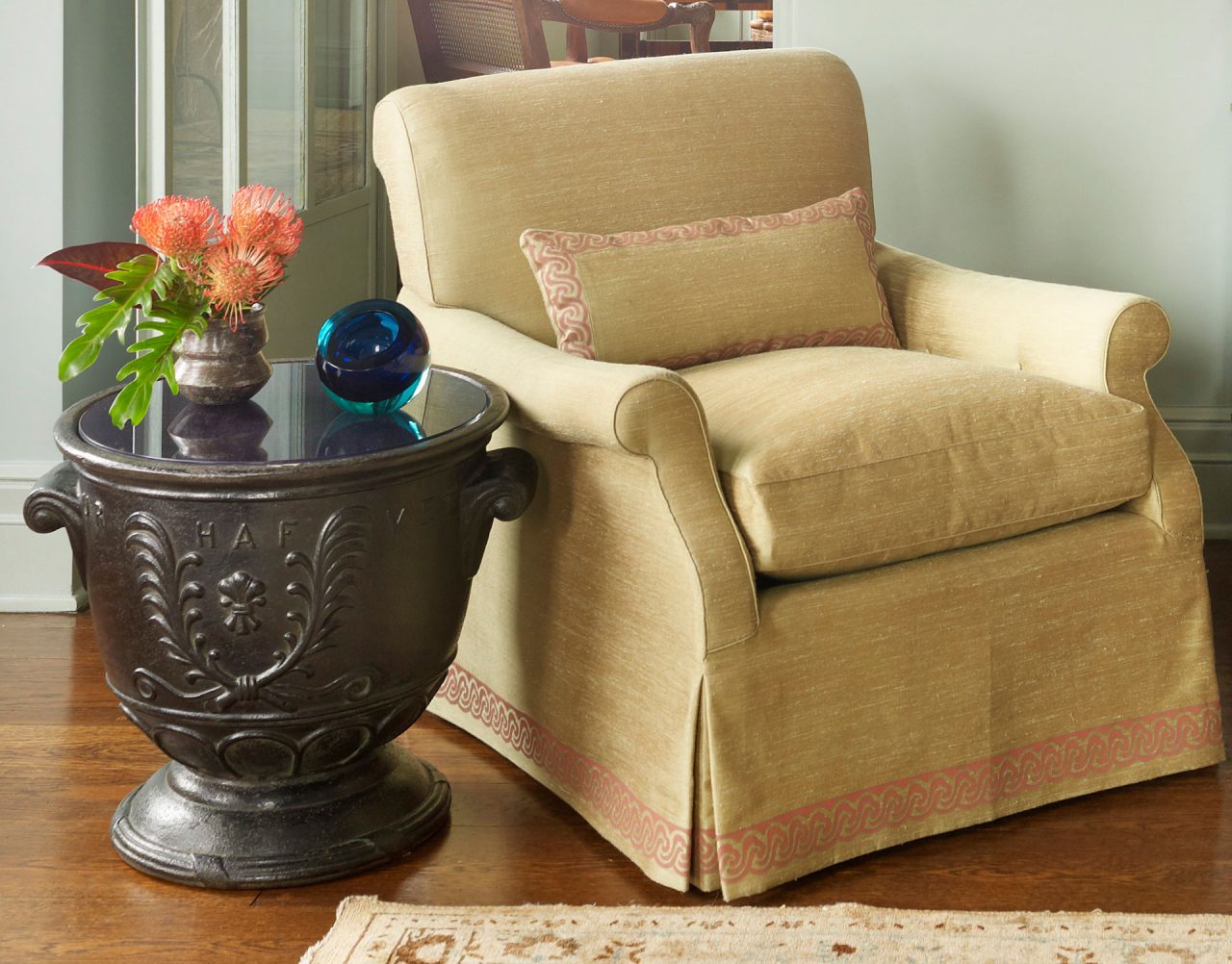 In the library, at left, the 20th-century French étagère forms an interesting relationship with an 18th-century English chair. Above, the addition of a glass top makes a Swedish bronze urn by Ivar Johnsson into a sculptural side table in the living room. 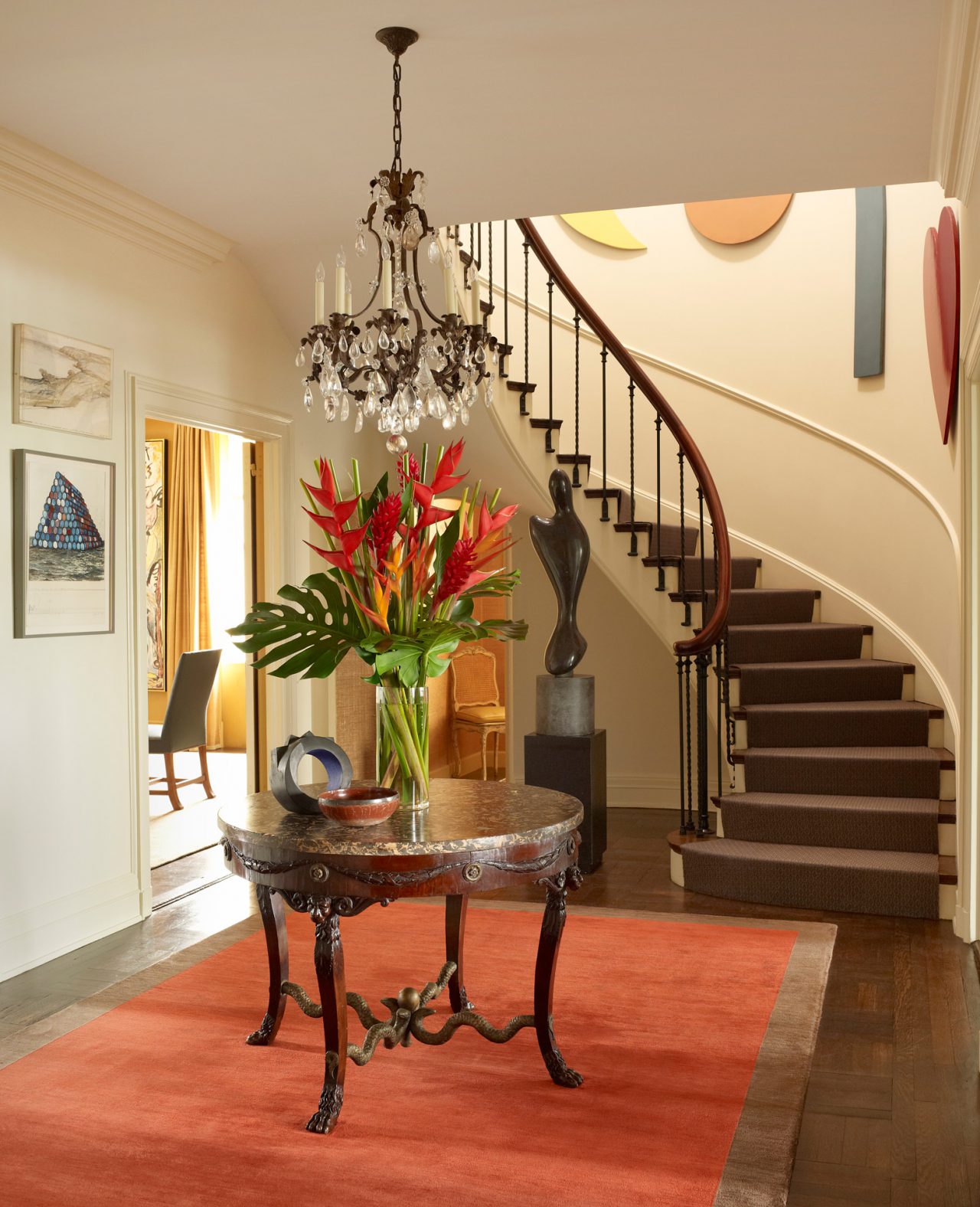 In the foyer, an early-19th-century Italian center table contrasts with the original spare architectural detailing. A sketch by Jean and Claude Christo hangs on one wall; Jim Dine wall sculptures follow the curve of the staircase.

A large early Jackson Pollock painting commands attention in the dining room. The gilt-bronze console and chandelier, both 18th century in style but 20th century in origin, were retained from the previous decoration and are complemented by the addition of back stools from Howe of London. 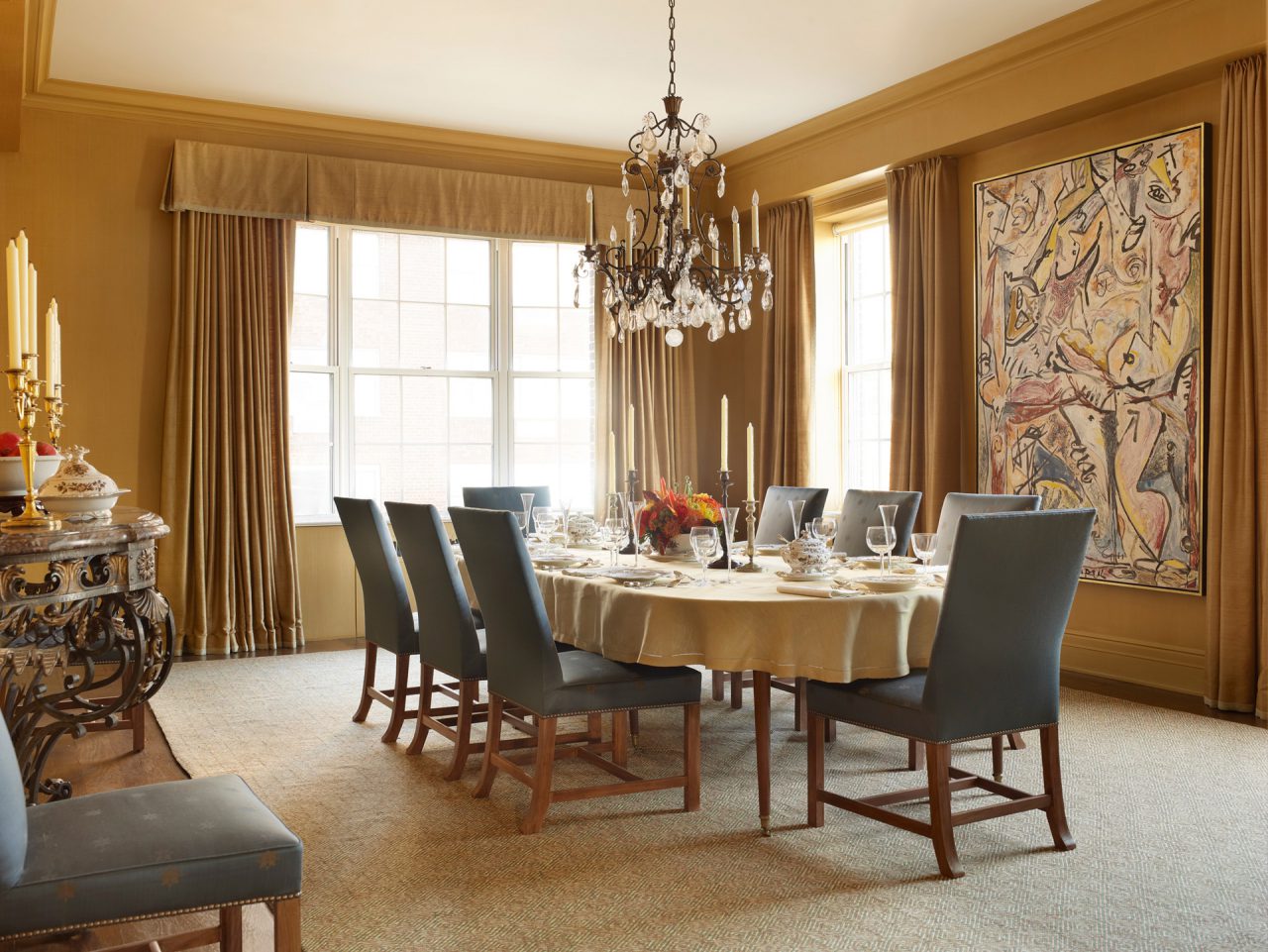 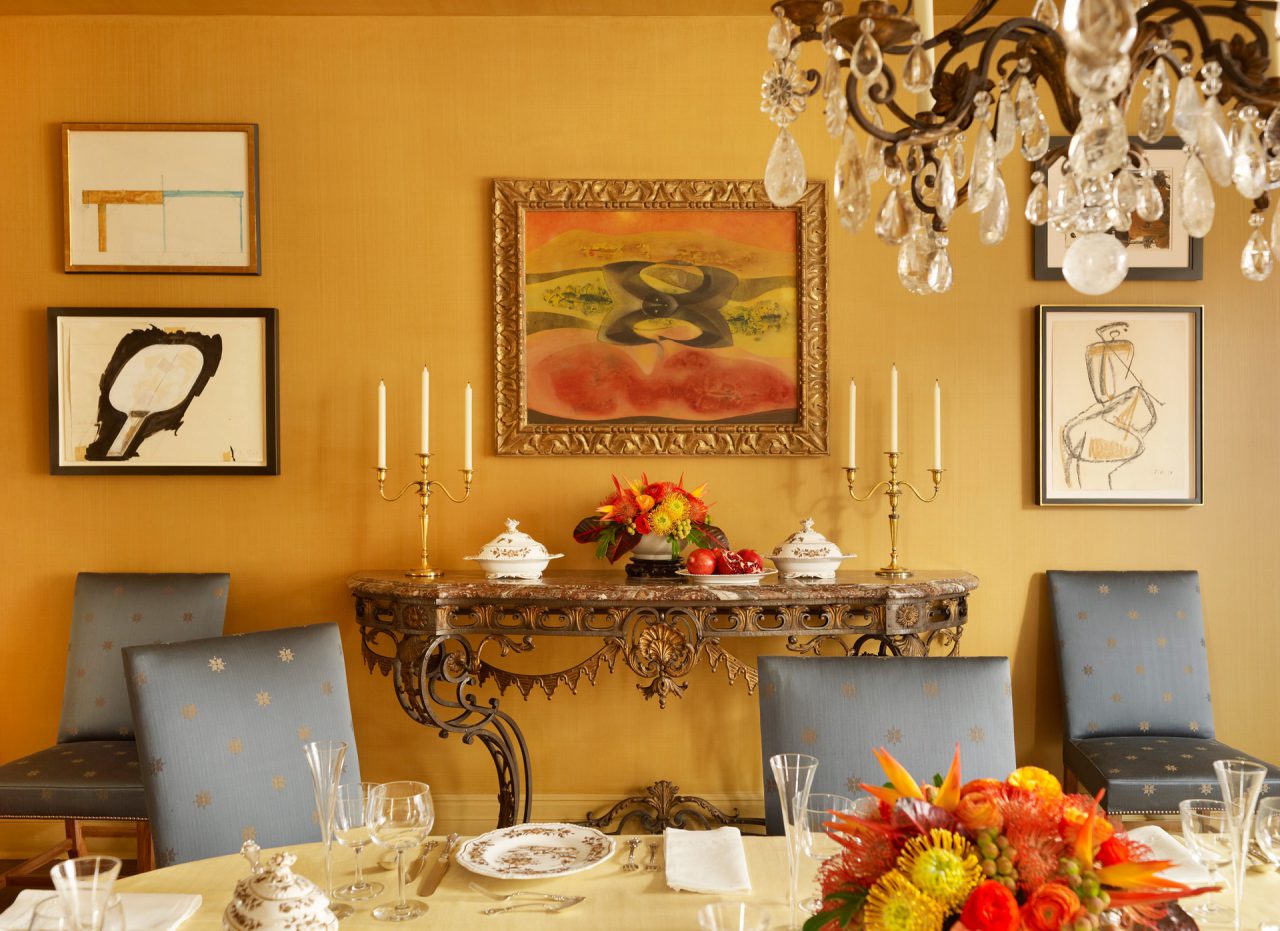 In the dining room, the simple silhouette of the dining chairs contrasts with the 20th-century baroque console. A painting by Max Ernst is flanked by a collection of 20th-century drawings.

The master bedroom’s bed cover is made from an antique sari. The painting above the Directoire-style secretary is by Fernand Léger. 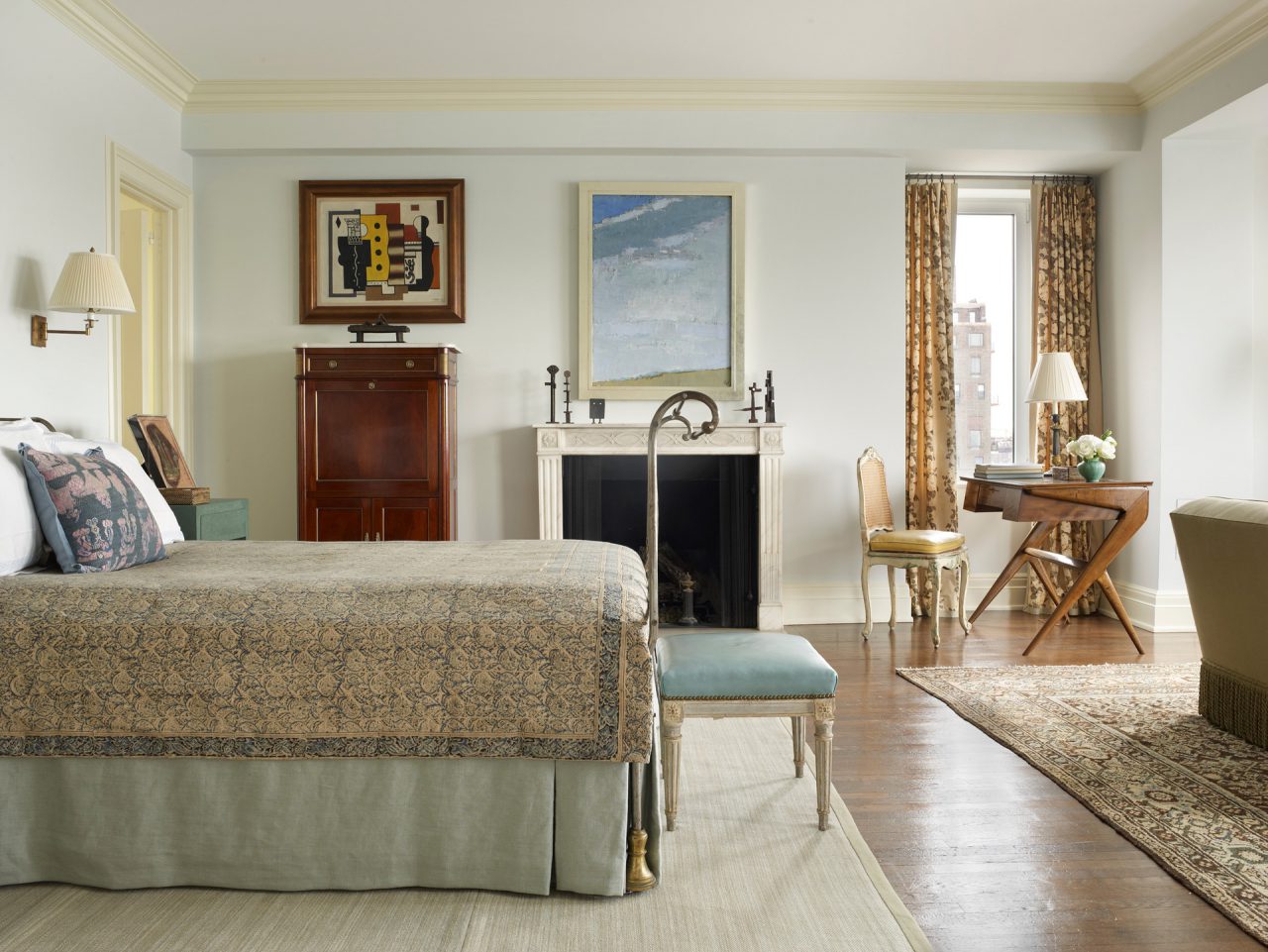 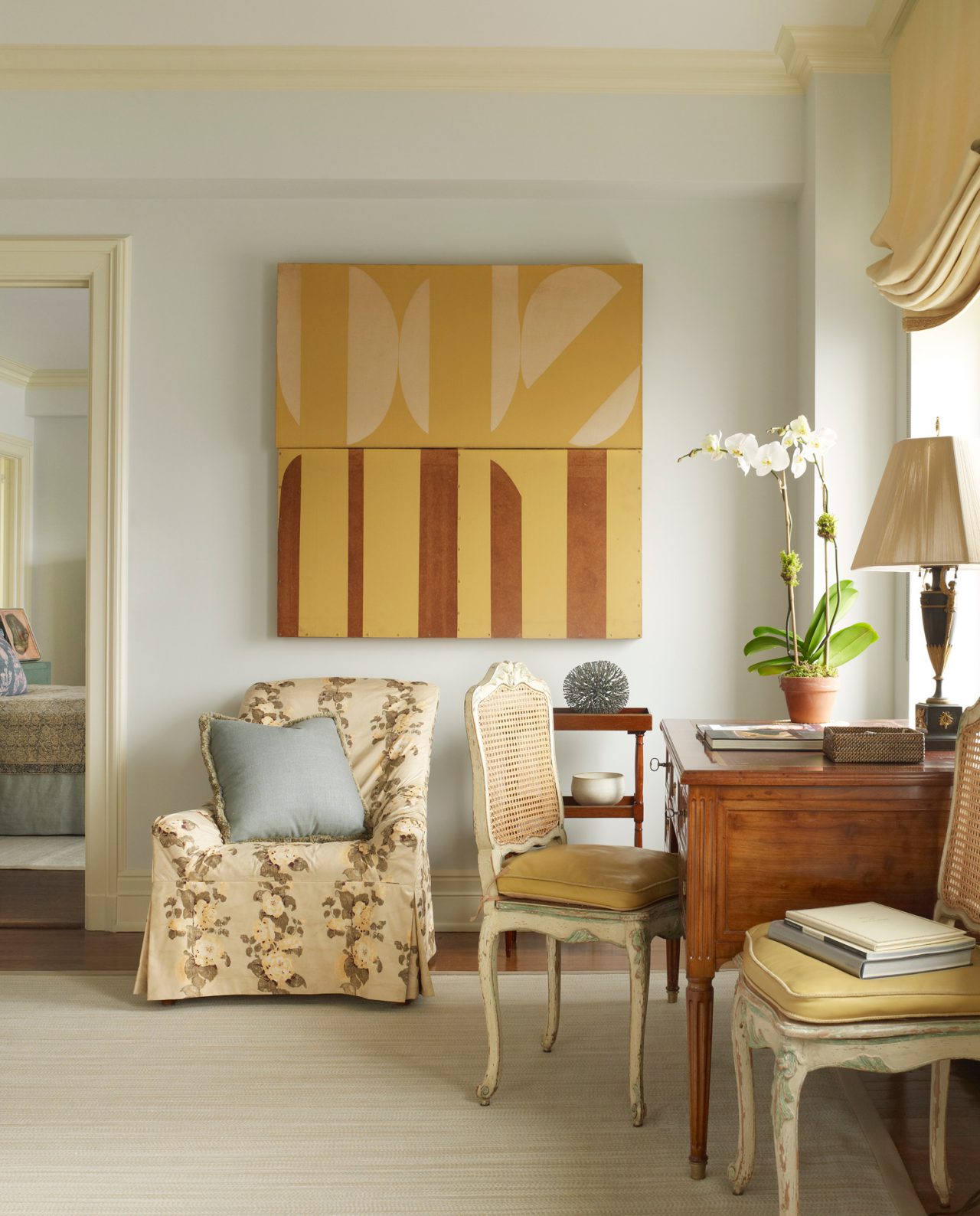 “Construction” by Sven Lukin hangs in a bedroom above a chair covered in a Rose Tarlow chintz.
Menu