Set on 120,000 acres in the arid lands of northeastern New Mexico, Diamond A Ranch is a working sheep ranch with a long history and a series of owners who each added to its expansive plan. The goal was to artistically relate this diverse collection of rooms, reflecting the region’s heritage without falling into clichés of Southwestern decoration. Historically, houses in New Mexico were furnished with a combination of locally made furniture, often in the Hispanic tradition, decorative arts from Europe and Asia and, after the establishment of railroads to the eastern United States, furniture manufactured there. The furnishings for Diamond A Ranch followed in this vein.

The ranch’s original adobe structures were built in the 1860s along a stagecoach stop, with a central section designed in the territorial style added in the 1940s. Herbert Bayer, an abstract artist and architect who was one of Walter Gropius’s favorite students at the Bauhaus, designed the ranch’s territorial-style main building in 1964 for New Mexico oilman and art collector Robert O. Anderson. Recently, architect Peter Pennoyer, working with its new owner, was able to bridge the disparate parts together, adding a commodious dining room, leather-paneled bar, and handsome courtyards. 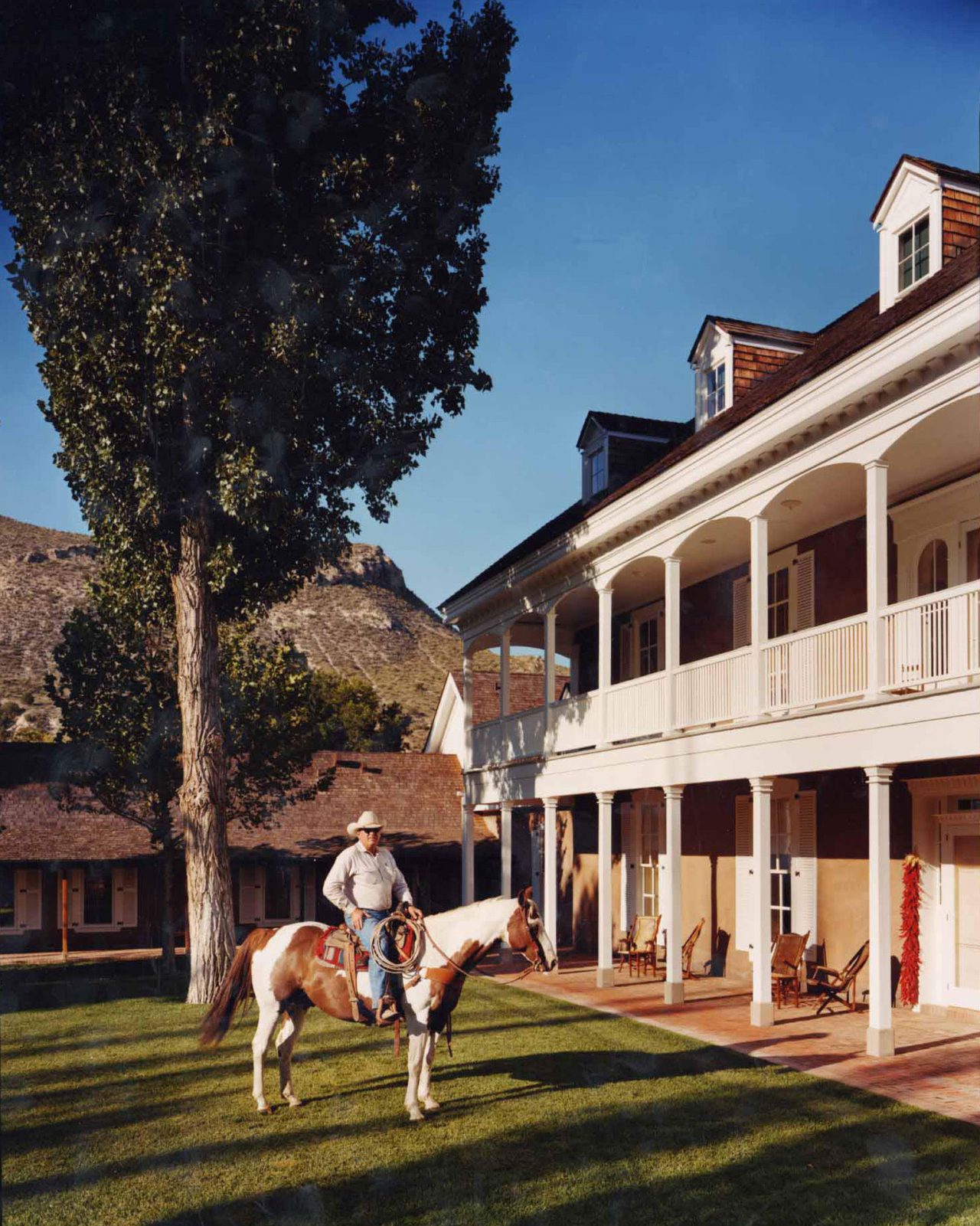 The 19th-century rooms of the adobe wing were in a dilapidated state. As part of the project, with the careful restoration of the adobe walls, compacted clay and dirt floors and vigas and latillas (a traditional ceiling cover made of beams and branches), they were turned into rustic guest rooms. Our decoration complemented these original features with an appropriate variety of antiques, including a French day bed, Empire mirror, and a side chair that was made in New Mexico.

The adobe wing opens onto the Spanish Room (opening image seen at top). This room is the center of the house, serving as both a luxurious oasis amidst the arid ranch lands, a space of great comfort as well as organizational anchor to the adjoining rooms. The walls are also adobe here, with old-fashioned printed chintz curtains and silk velvet sofas for contrast.

The dining room—the newest room in the house–was designed with an arched and coffered ceiling, inset with sections of a gilded star-patterned wallpaper. The chandelier is an English Victorian “gasolier” by S. & C. Osler. The dining room is meant to recall elements of the Greek Revival period when the main house was originally built. 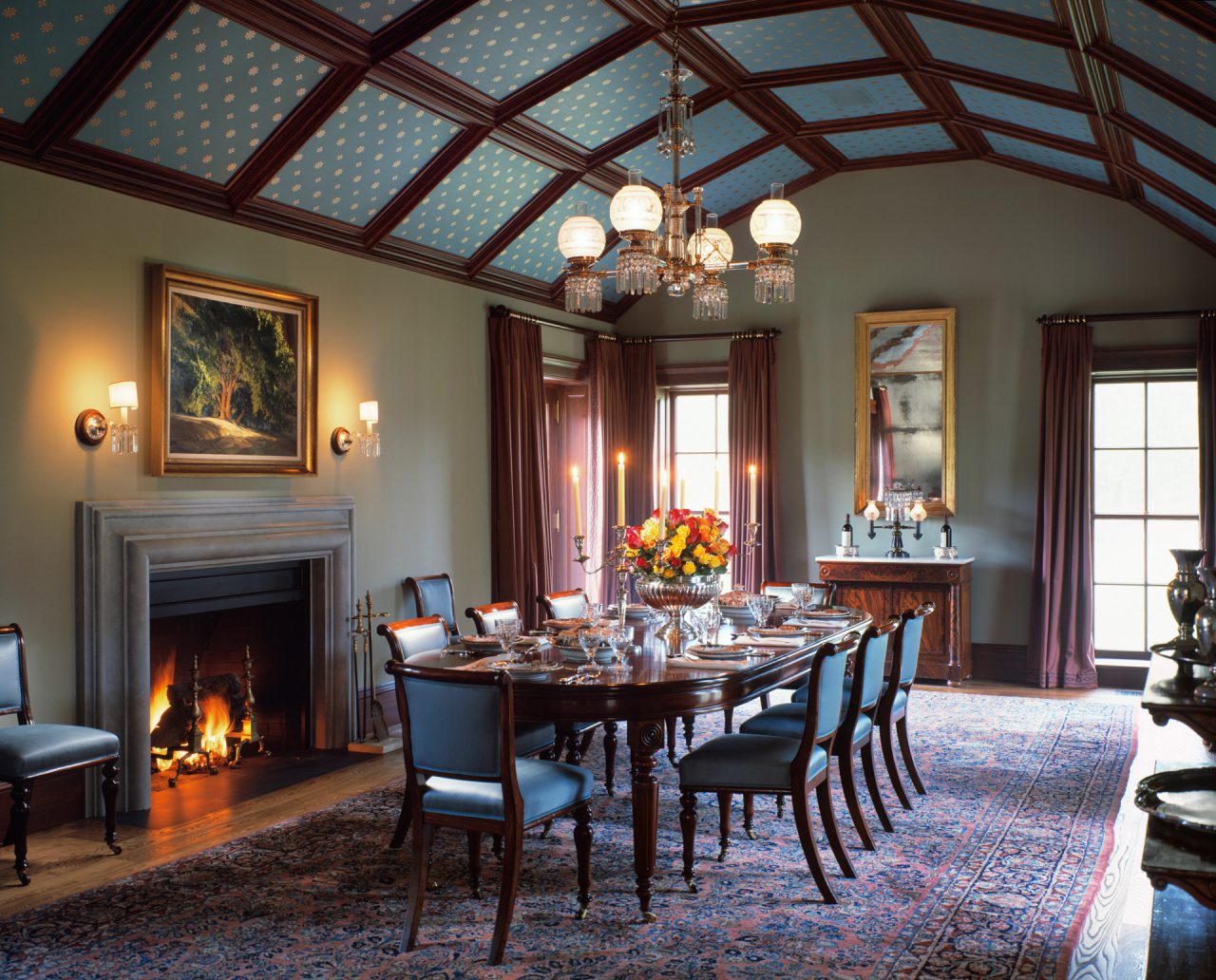 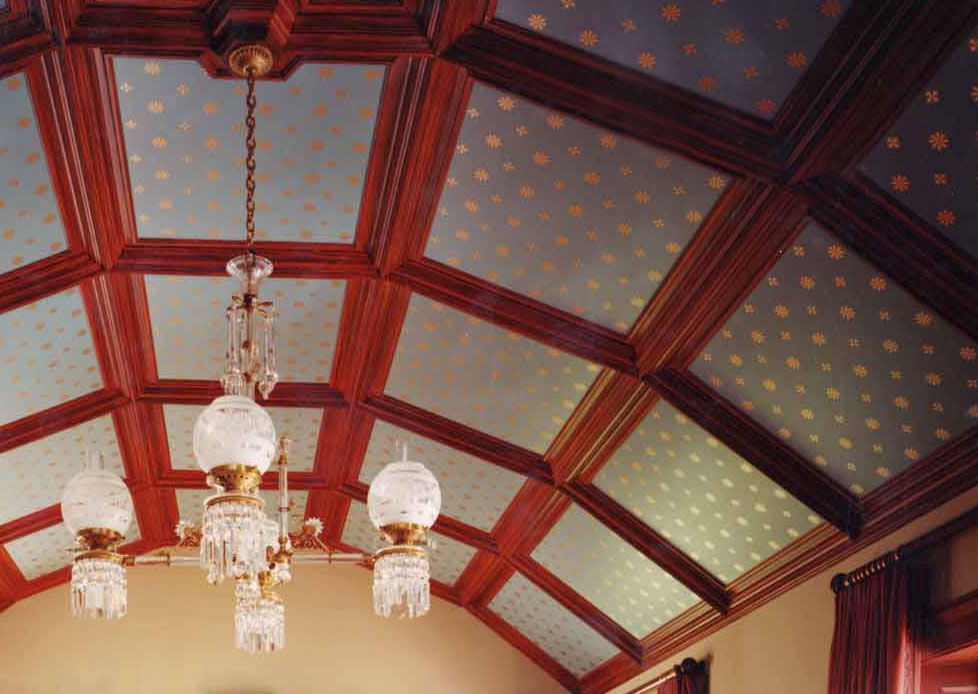 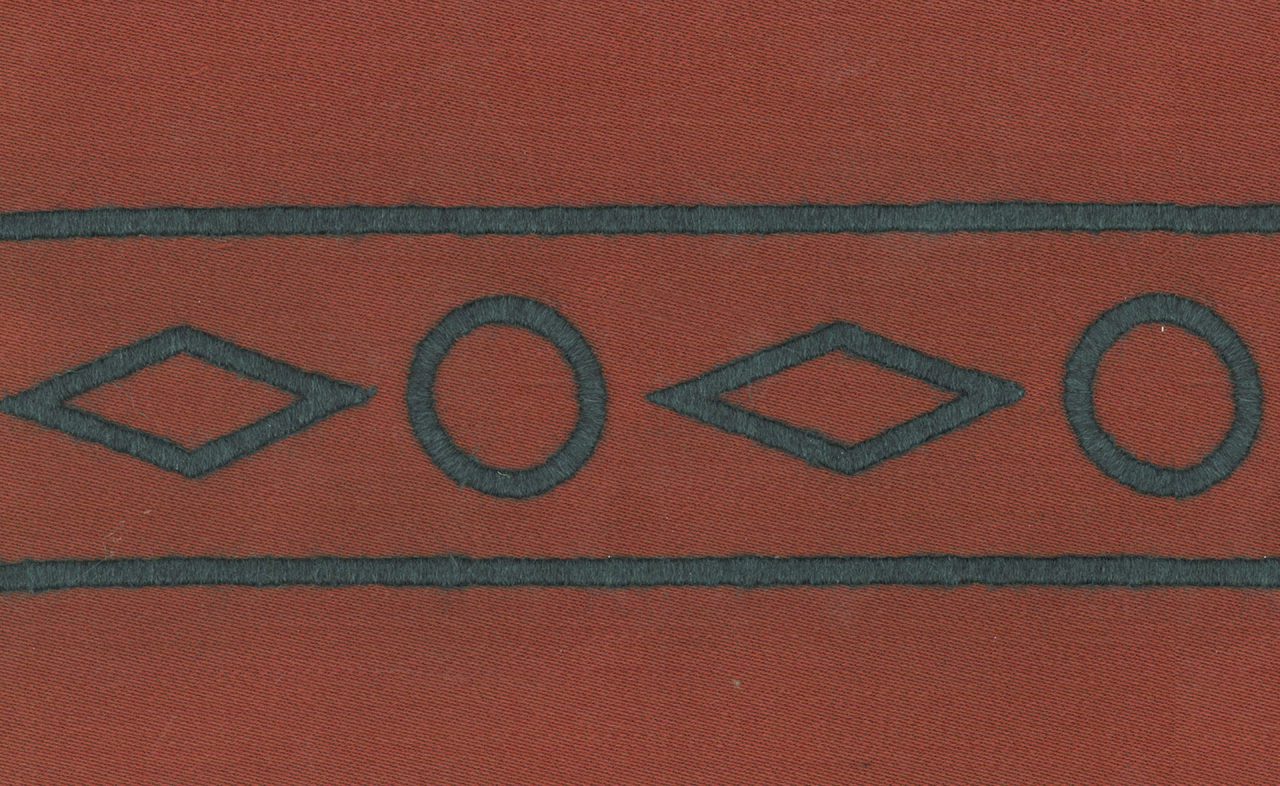 The ceiling paper is an 19th century pattern from Bradbury & Bradbury. The curtains in the dining room are embroidered with a diamond – circle repeat along its border, a cattle branding symbol dating to the late 19th century. The symbols were used by the Diamond “A” Cattle Company which once ran a large cattle and sheep ranching outfit in the area from 1885 to 1939.

The bar has panels covered in deep brown leather studded with nailheads and rich wood paneling designed by Peter Pennoyer. The room features a bronze sculpture of two cowboys shaking hands as a gesture of hospitality in a room intended for entertaining large groups of guests. 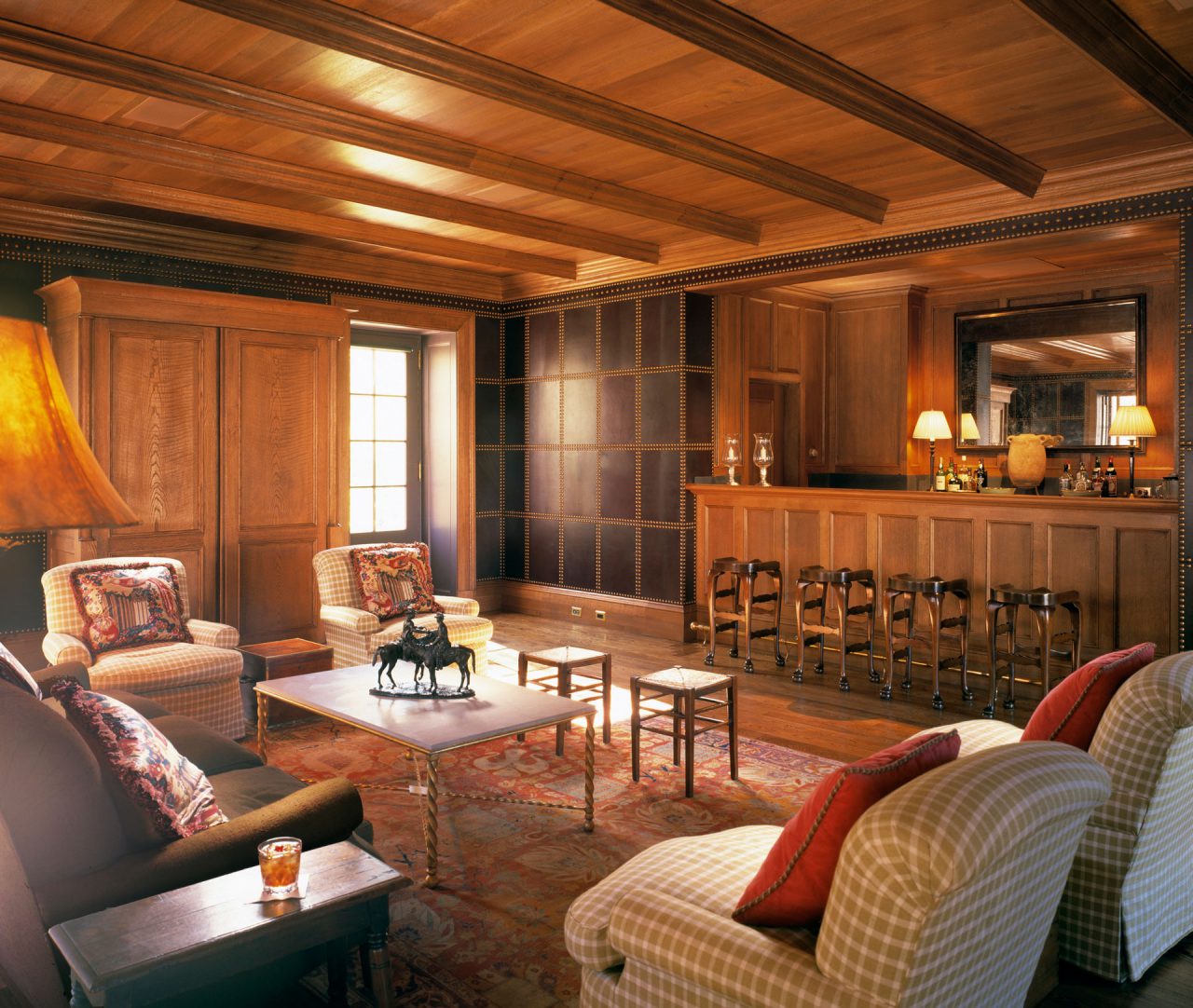 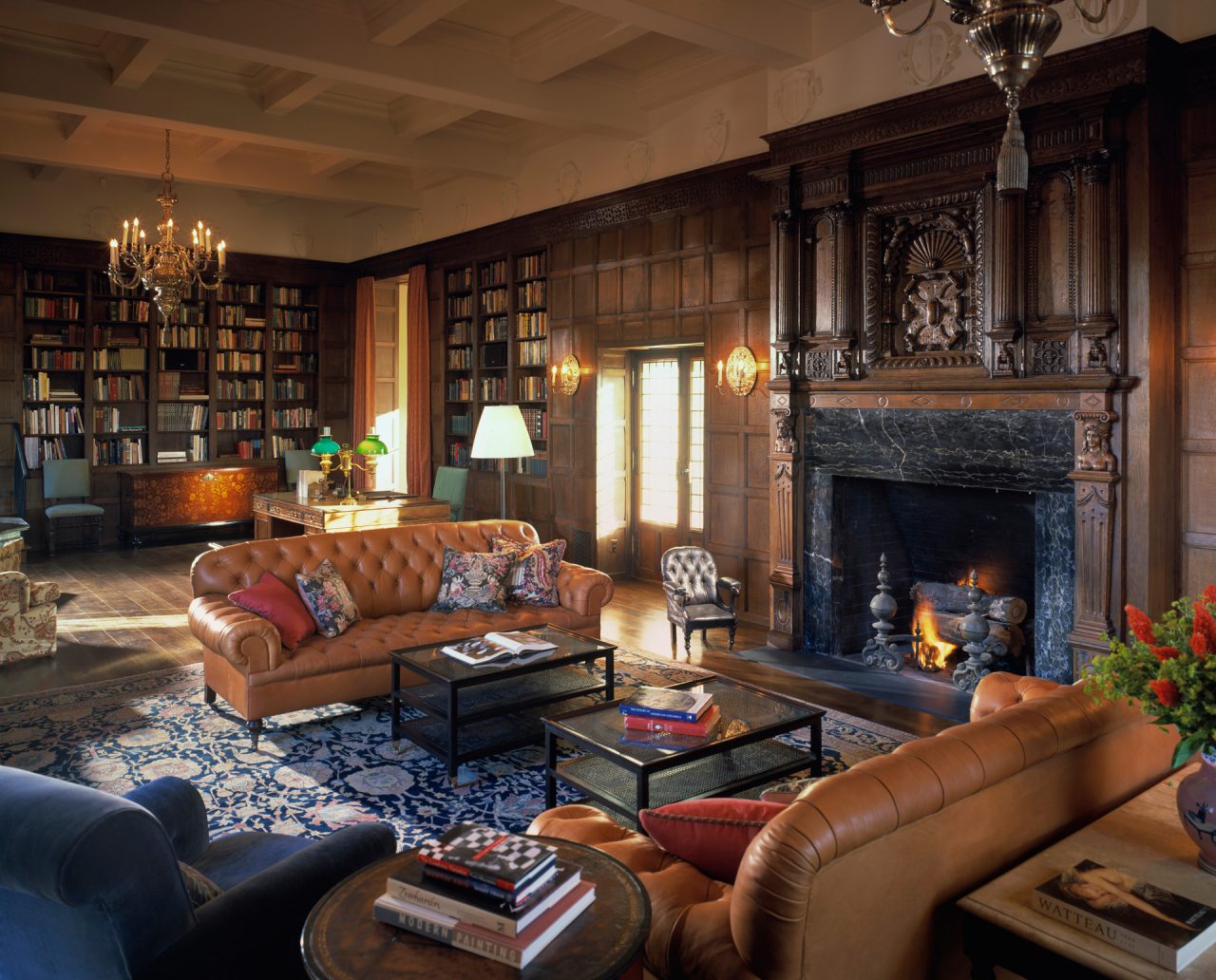 Adjoining the Spanish room and compounding the architectural diversity, the library is covered in 17th-century Irish oak paneling, which was removed from the Huntington mansion in Hillsborough, California, and installed in the mid-20th-century by earlier owners. We worked with Peter Pennoyer to restore the paneling and added the plaster friezes and ceiling to complement the style of the paneling and give the room more classical proportions. A pair of silver-plated chandeliers, a suite of tufted leather upholstery, and antique carpet complete the room.

An early-19th-century American tester bed in the attic bedroom is dressed with green linen bed hangings lined with stripes. The rest of the room is arranged with antique quilts, hooked rugs, and a wing chair.

Many of the hallways in the house serve as galleries for artwork. In this one, the contemporary and Old West are celebrated with horse paintings by Joe Andoe displayed alongside antique saddles, reins, and riding gear atop an Italian cassone trunk. The rustic nature of the baroque-style furniture imported to the West suits the passage to the adobe wing.