Brownstones, an American variant of a townhouse, proliferated in East Coast cities in the late 19th century. Many, like this one designed by A. B. Ogden in 1889, were divided into rental apartments during the middle of the last century and lost much of the cohesion of their original design. Its new owners, a young family, commissioned architect Basil Walter to unify its interiors and return the building to single-family use. 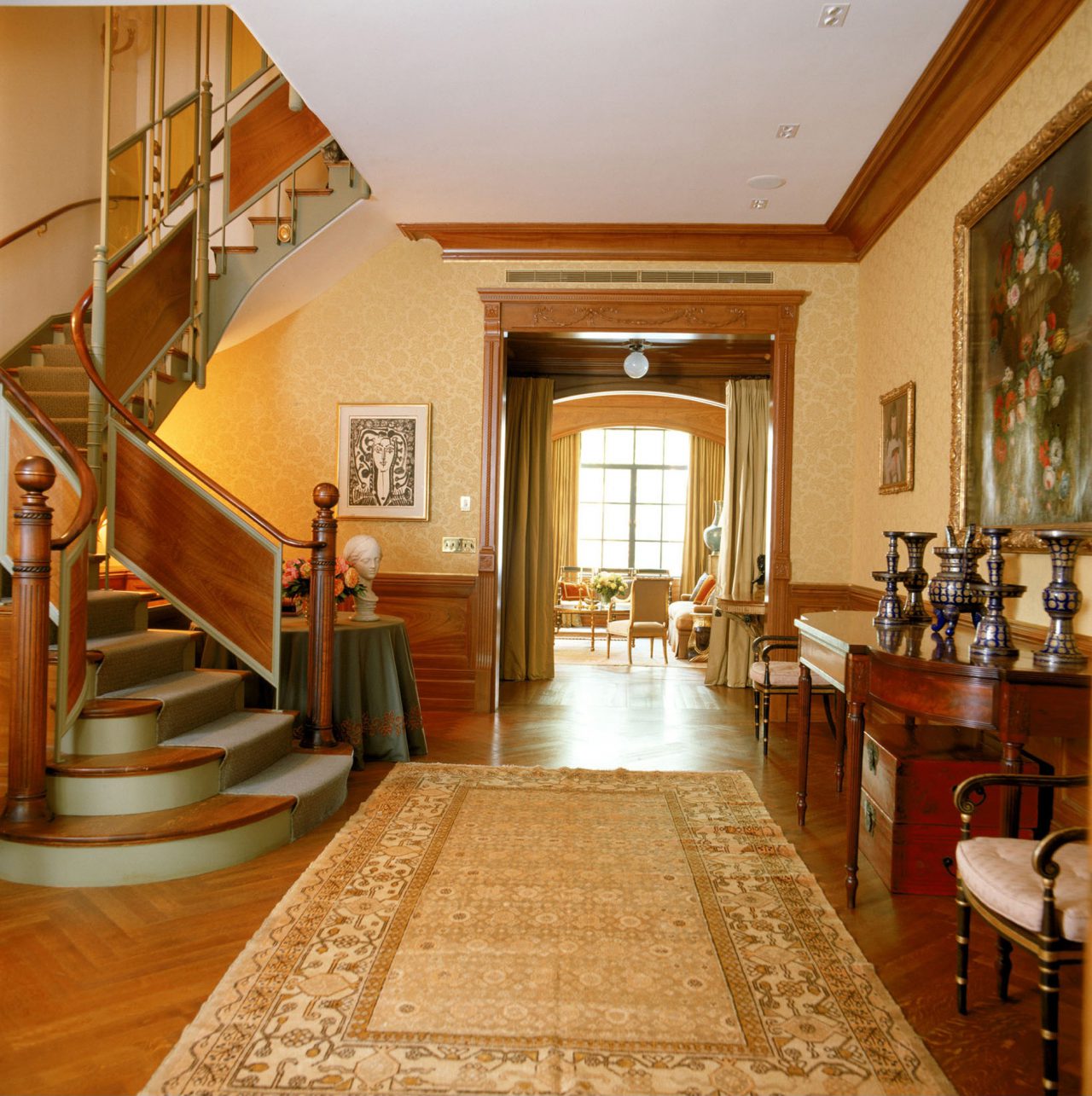 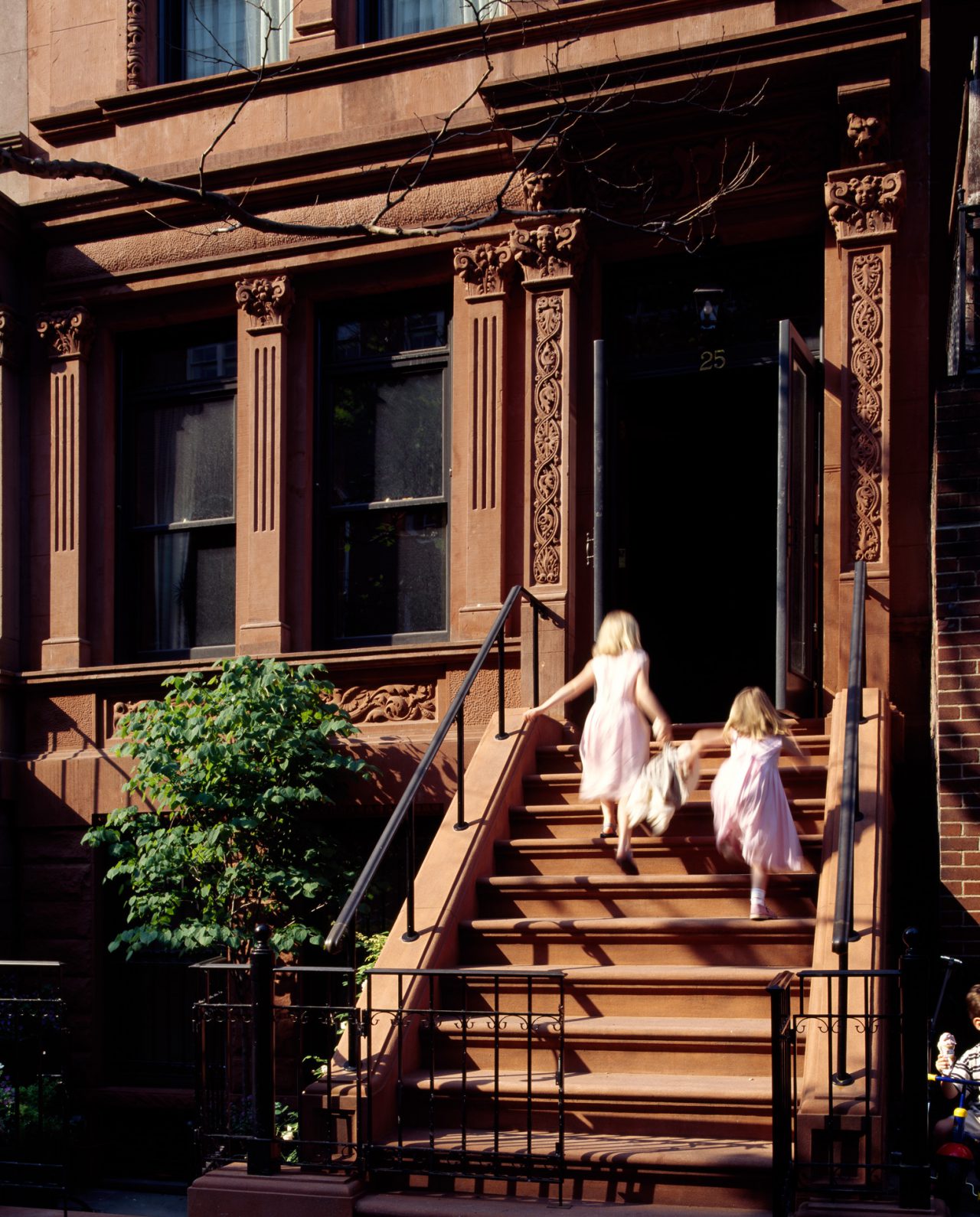 His plan focused on centering the staircase and adding two large skylights overhead. Our design draws on a 19th-century vocabulary with multiple sources, including the Sir John Soane Museum in London, Parisian elevators, and the yellow glass found in early English and American houses. We also borrowed the idea of using gold wire, or so-called chicken wire, from the French decorative arts tradition.

The front parlor is part entrance hall, part living room. The walls are upholstered in wool serge embossed with a damask pattern, and the woodwork has been grained to resemble walnut. The sofa and chair are covered in suede and tapestry and finished with bullion fringe. The design is adapted from a model associated with the influential Italian decorator Renzo Mongiardino. A painting by Bo Barlett of his daughter hangs above the sofa.

The back parlor was decorated as a formal reception room. Every effort was made to keep as many of the original architectural details as possible, to which we added other 19th-century details including panels of architectural mirror to reflect the available light—also an oblique homage to the Soane. To blend the old woodwork with the new, everything was grained to resemble a medium-brown walnut. 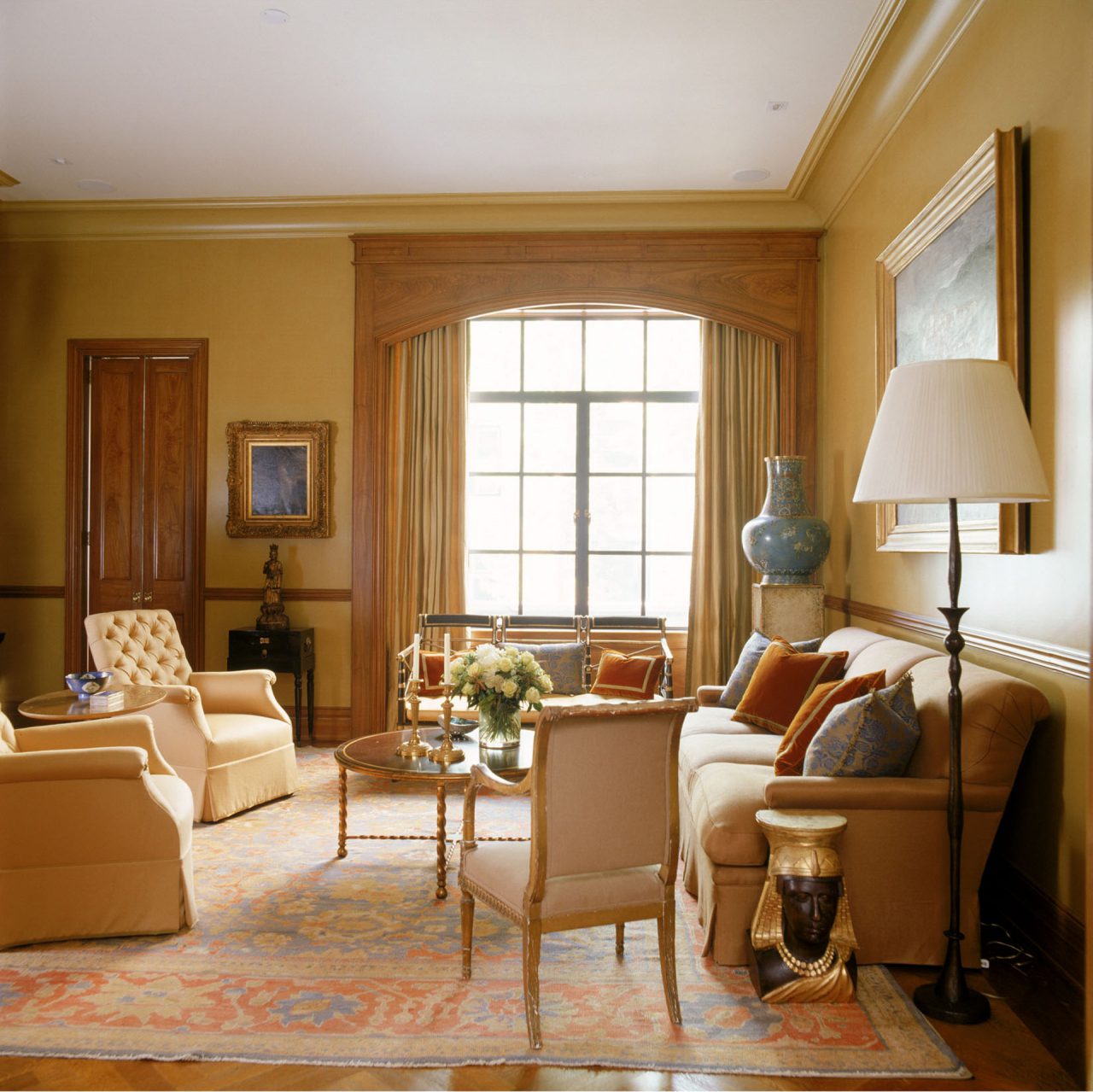 The palette of this room is drawn from the 19th-century Persian Sultanabad carpet. Decorative artist Pierre Finkelstein created a glazed strié finish on the walls and grained the woodwork to resemble walnut. The room features a collection of English and Continental furniture that our clients assembled when they lived in London. 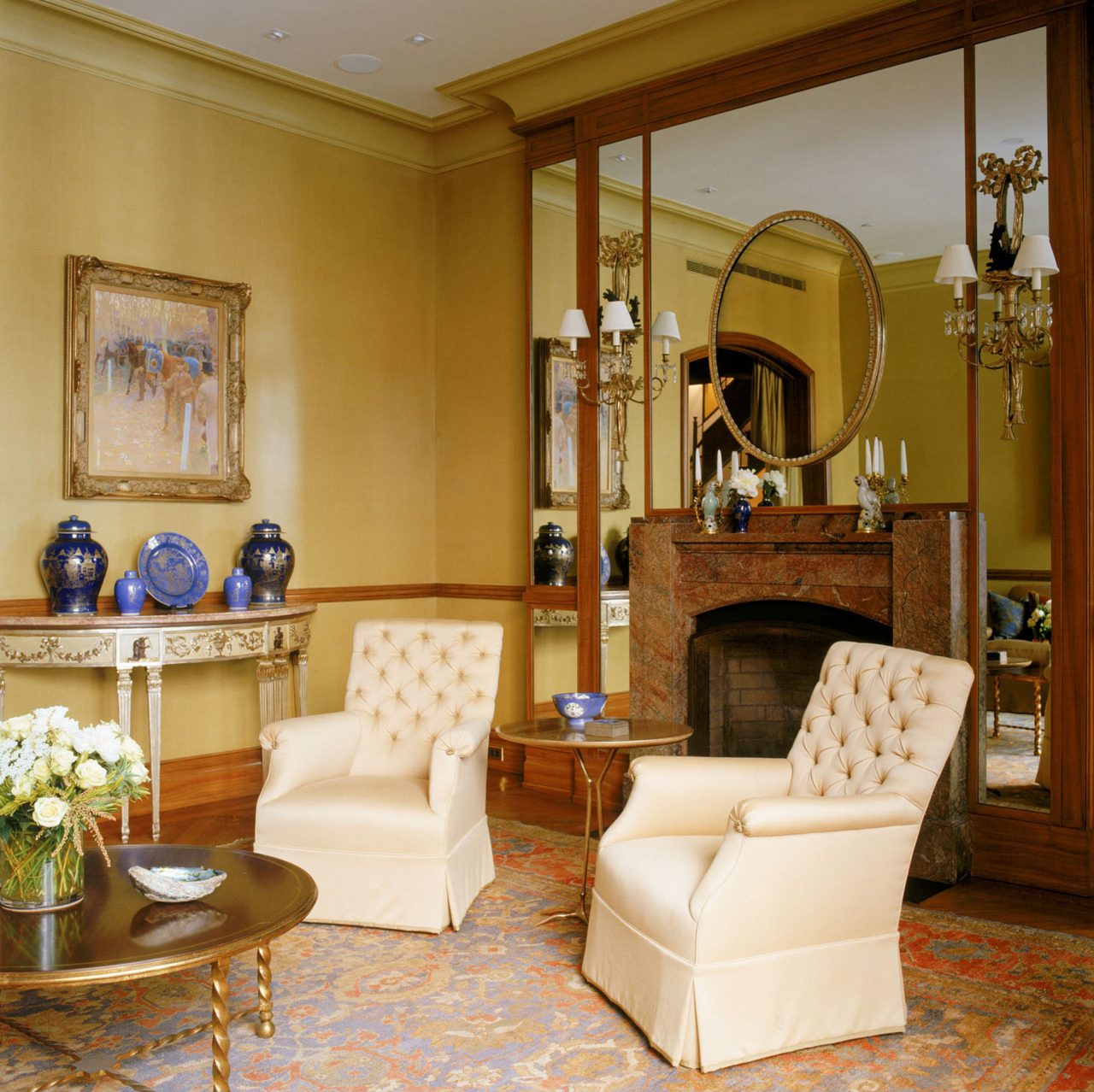 The fireplace wall was designed to feature a rare pair of Georgian sconces, an 18th-century Irish mirror and a Scottish mantelpiece. 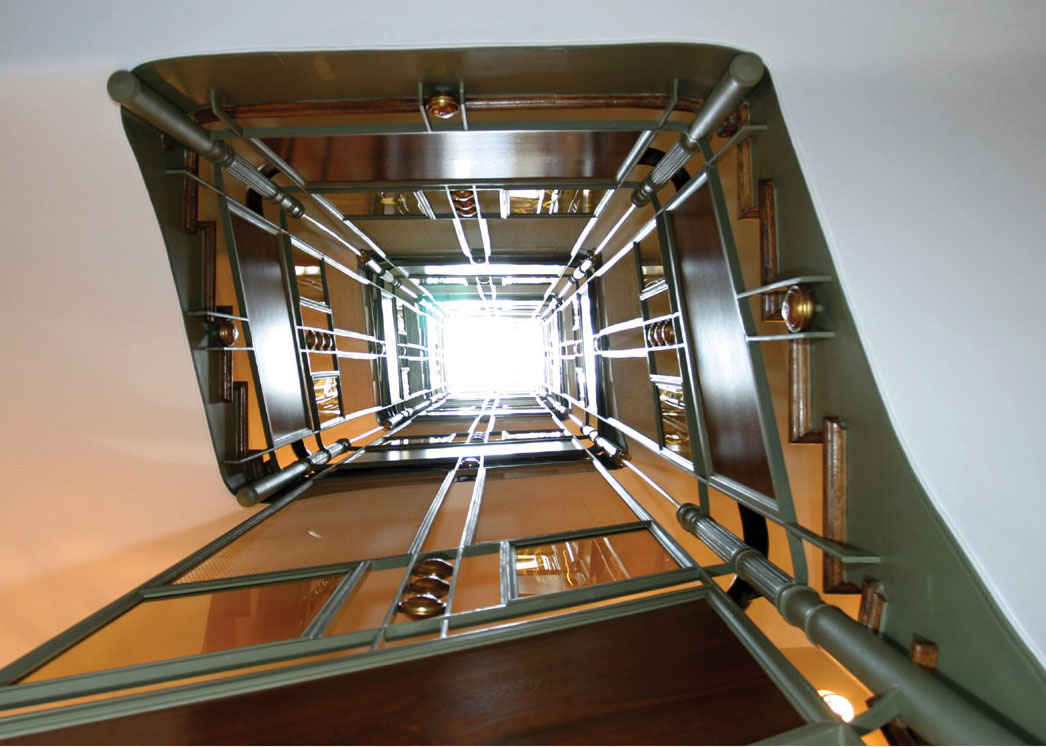 The stair climbs the full height of the house and is topped by a skylight.

The guest bedroom has curtains hung from rosettes and are made of gauze trimmed with silk tape, a simplified modern take on 19th-century designs. The walls are papered with a yellow damask pattern and a Baltic chandelier hangs above. 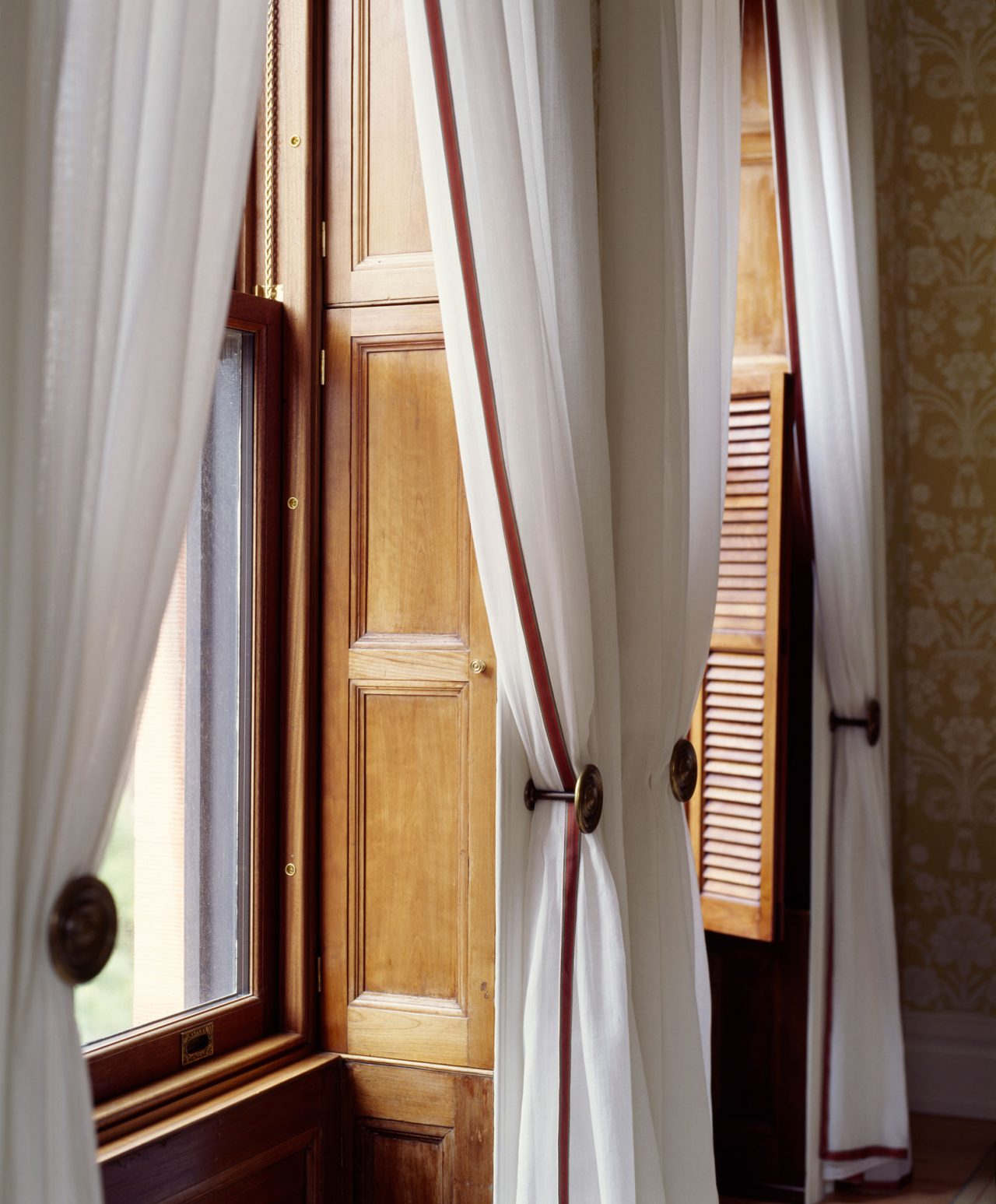 Sheer curtains, meant to maximize light and privacy, are often very basic– but these play up the decorative and historical connections .

The daughters share a floor with a playroom, workroom, small terrace, and a large bedroom. To create privacy, we made their beds tent-like, customizing metal frames with their monograms and crowning each one with a different bouquet of feathers and butterflies. The mirrored wall conceals storage cubbies and adds a modern touch. 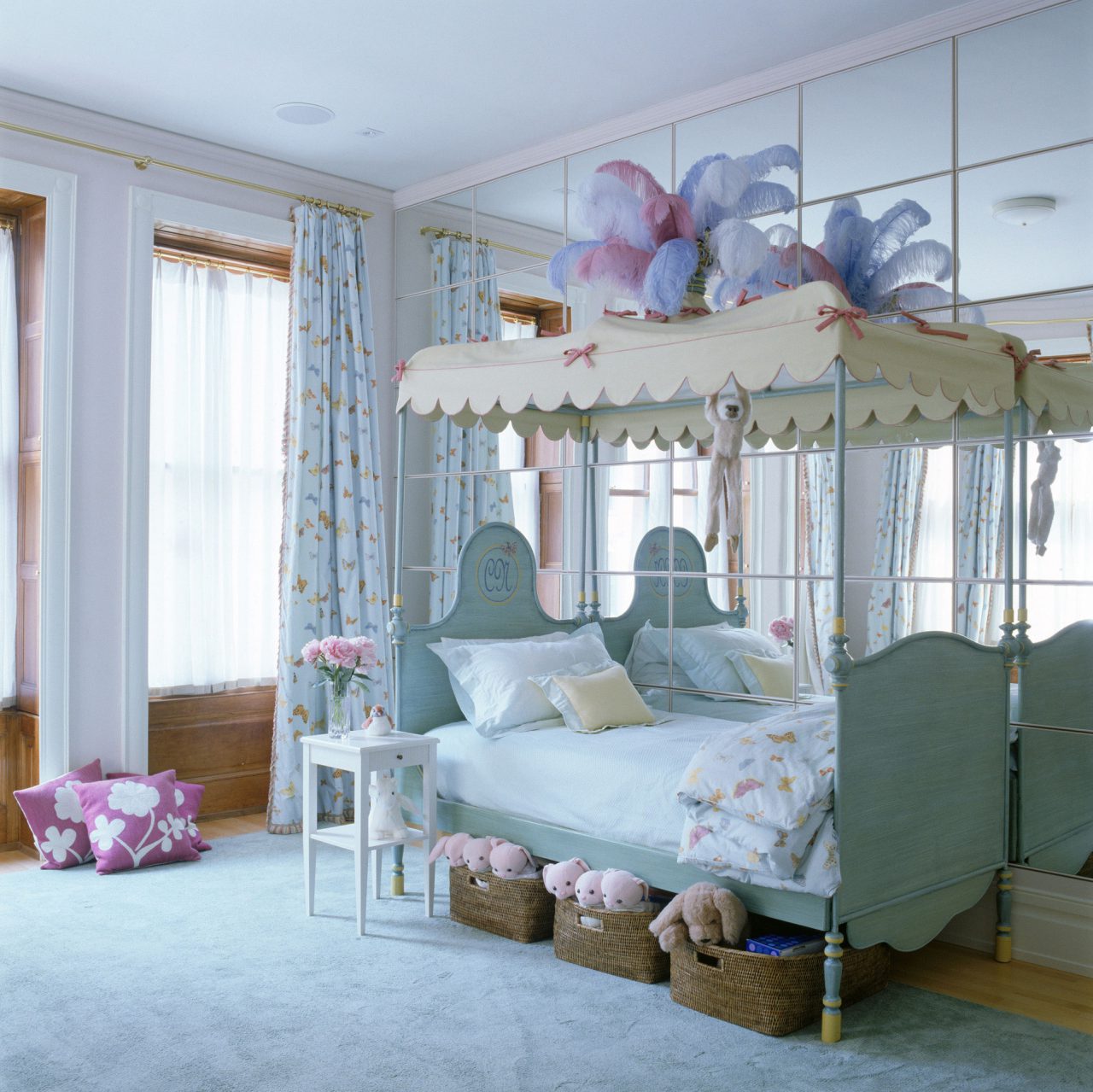 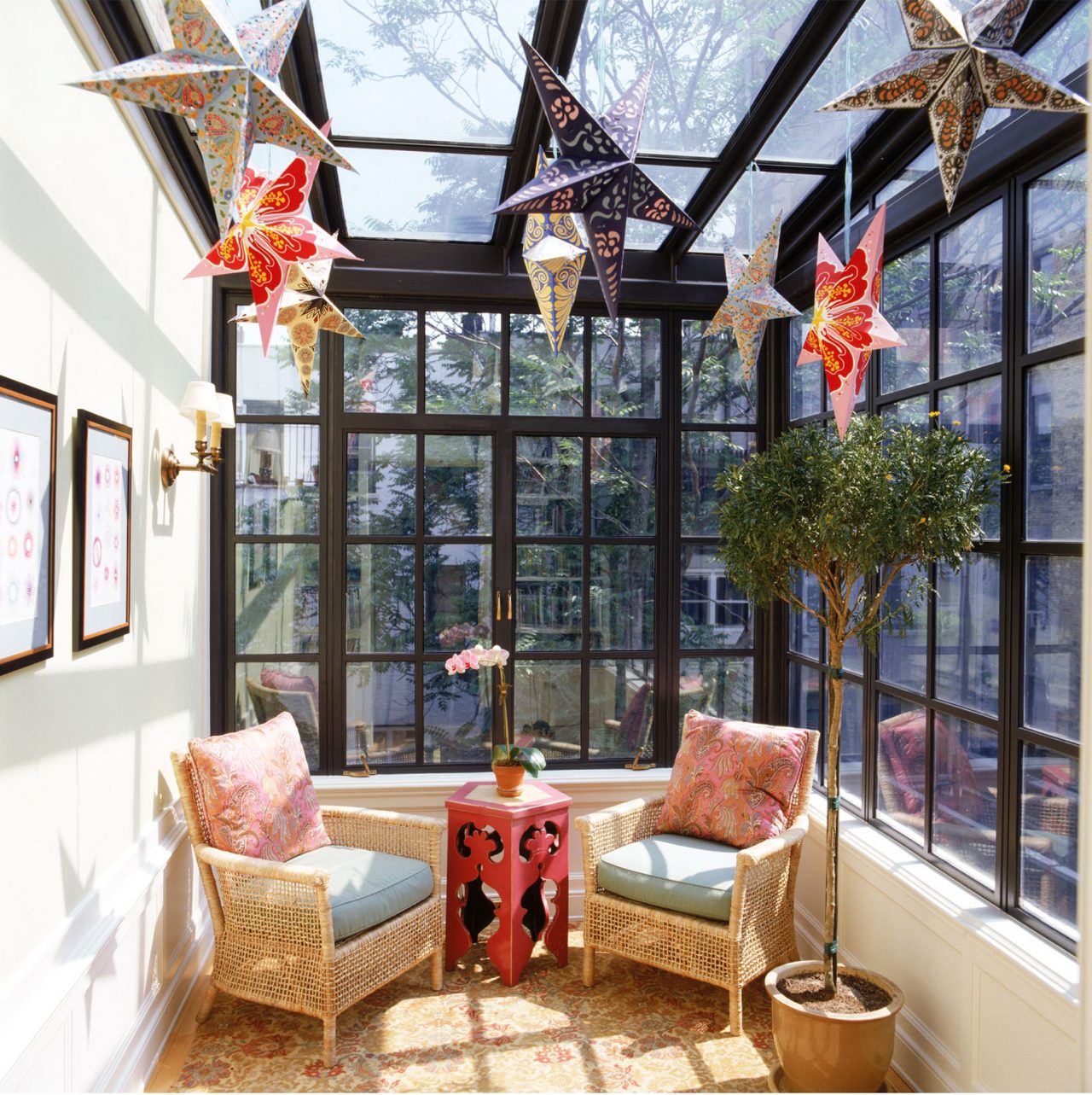 This light-filled terrace room off the girls’ room is simply decorated with paper stars.

The library is often flooded with the sun from skylights over the stair and the desk. In a nod to Victorian precedents, we incorporated pieces of colored glass as well as mirrored panels. The inset leather panels underline the bookish feel of the room. 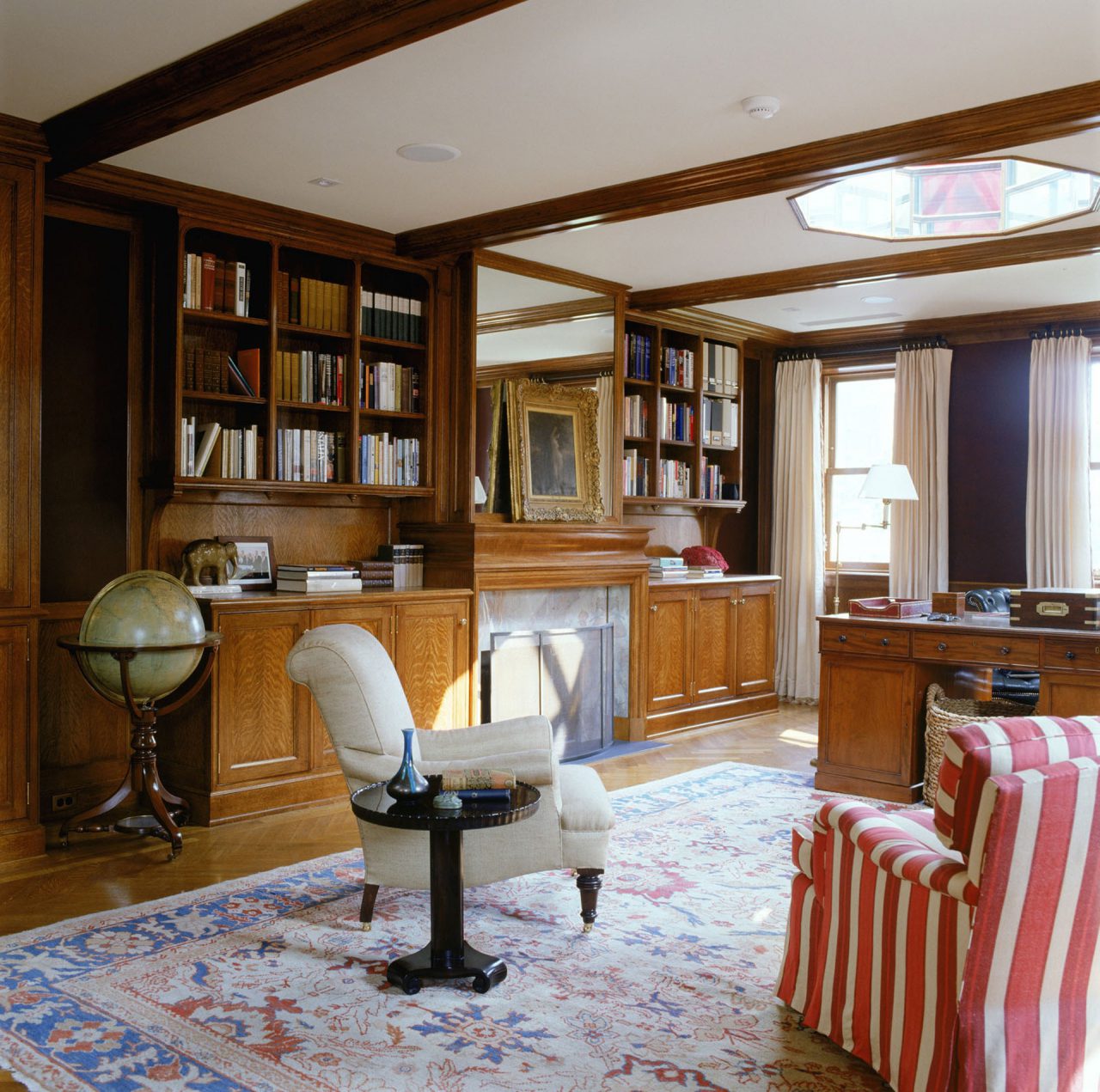 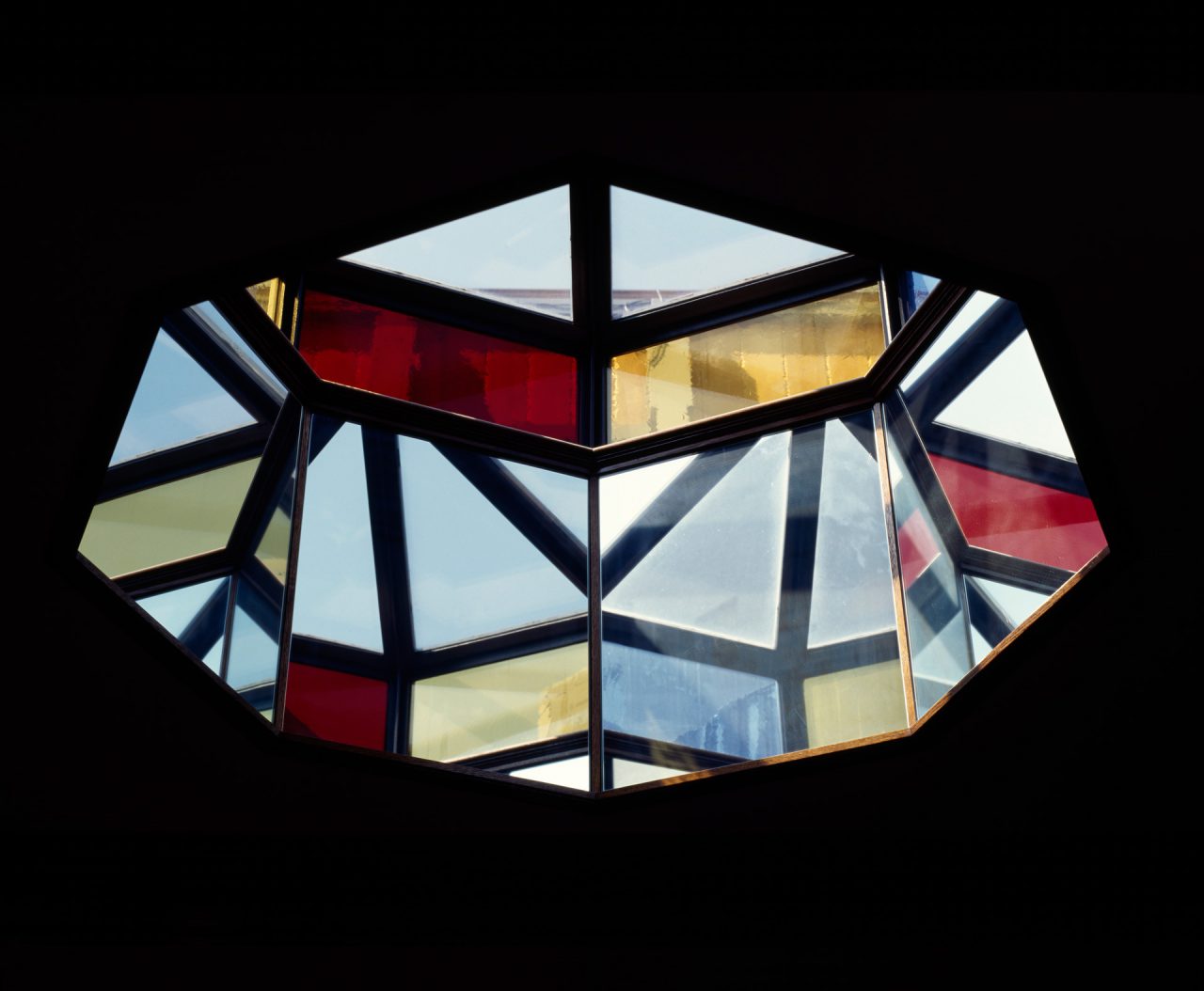 An octagonal skylight trimmed with clear, mirrored, and colored glass is positioned near the client’s desk.

The loggia sits under a large skylight and has French doors opening onto a terrace framed by embroidered white linen curtains. The space is comfortably appointed with lightweight leather chairs and an antique wicker sofa. 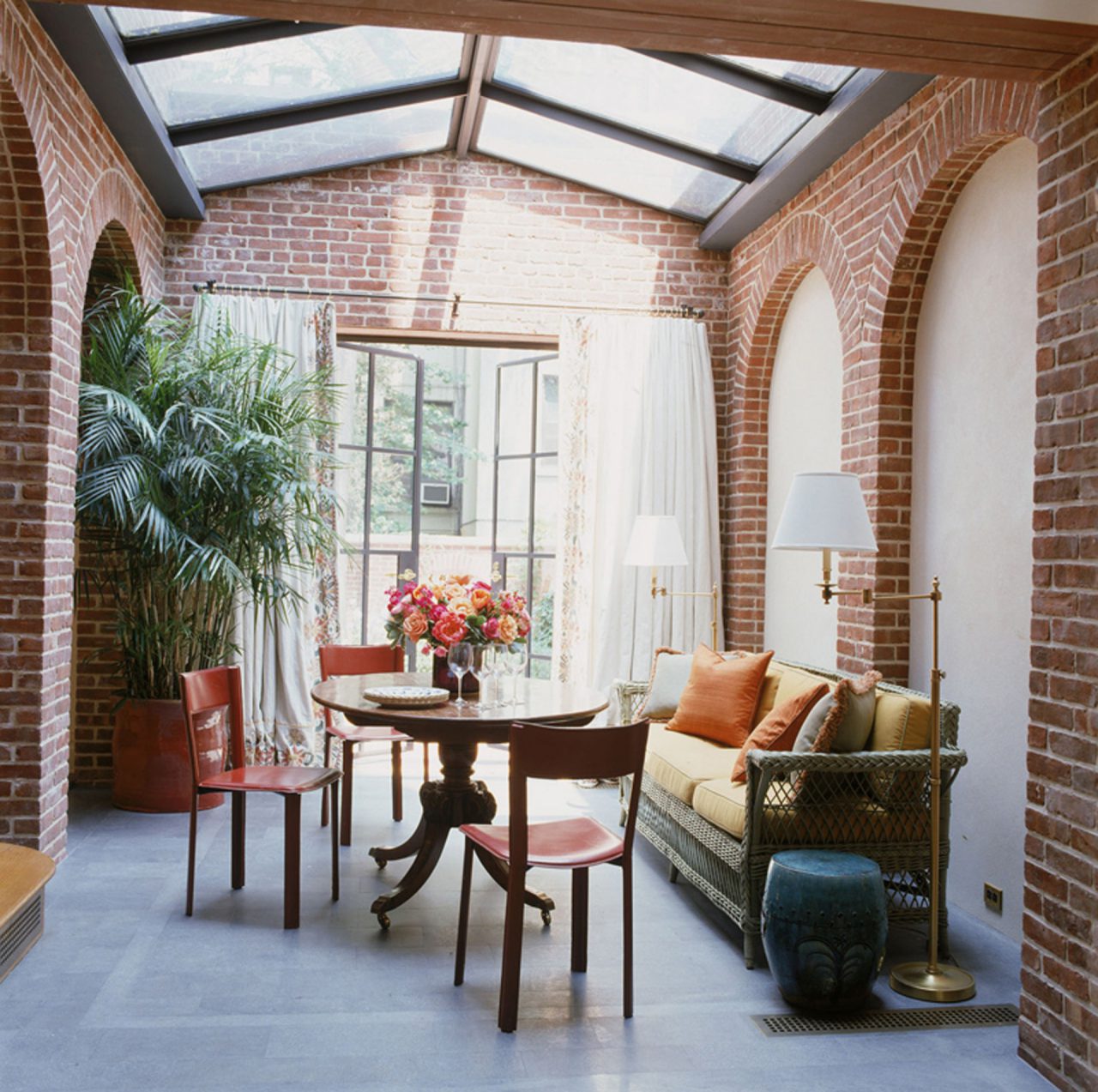 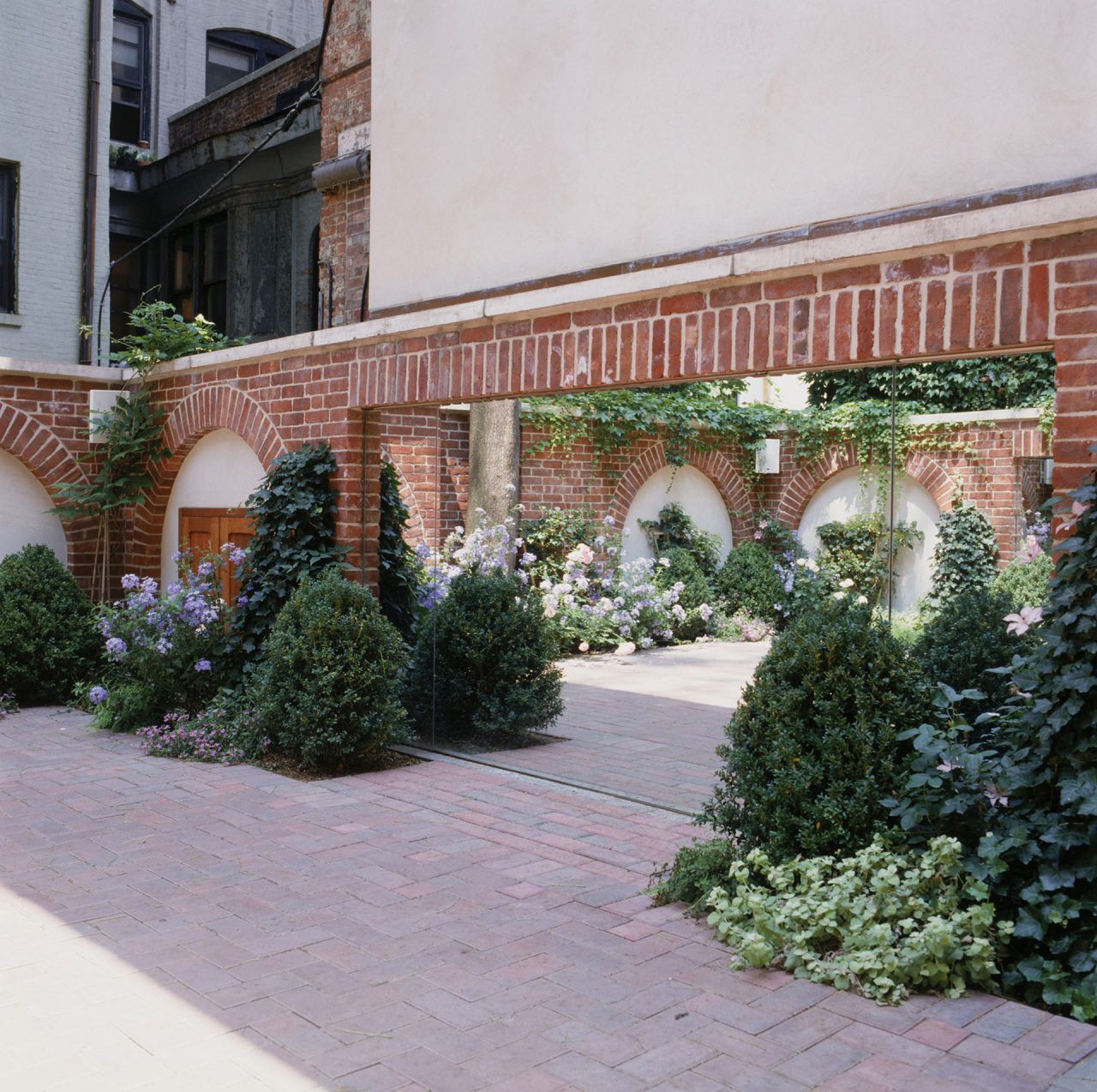 The garden has mirrored walls that add dimension to a small exterior space. The panels expand the views and effect of light over the course of the day.
Menu