During our first meeting, our client asked us to evoke the spirit of the great Hudson River houses in the design of her new home being built near Millbrook, New York. Our firm, working together with Peter Pennoyer Architects, helped to create sophisticated architecture and decoration that not only reflected important houses in the area like Montgomery Place by A. J. Davis and the Mills Mansion by McKim, Mead & White, but also drew inspiration from their prototypes—the tradition of British country houses shaped by architects and designers such as Robert and James Adam, Henry Holland, and Sir John Soane. 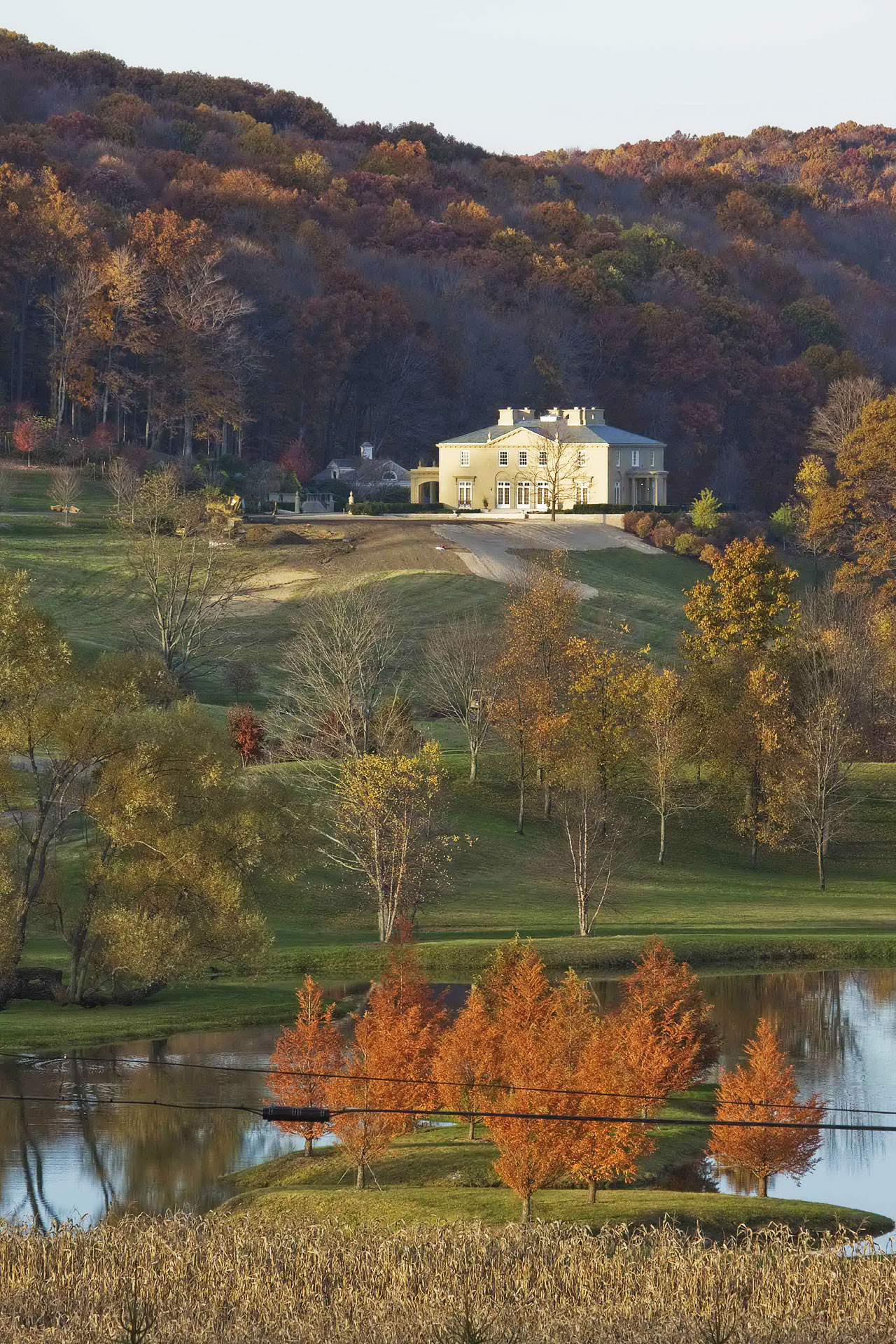 The house is set low in a valley of small hills – or drumlins – that were formed by glacial deposits. The genius of this location created views up and down the valleys, free of any neighboring buildings; all the rooms have long pastoral views.

All four classical facades of Drumlin Hall were individually designed and relate specifically to the public rooms behind them. In turn, all of the rooms open onto a great central vaulted hall and curved stair. Every space is well proportioned and oriented to the commanding scenes outside. 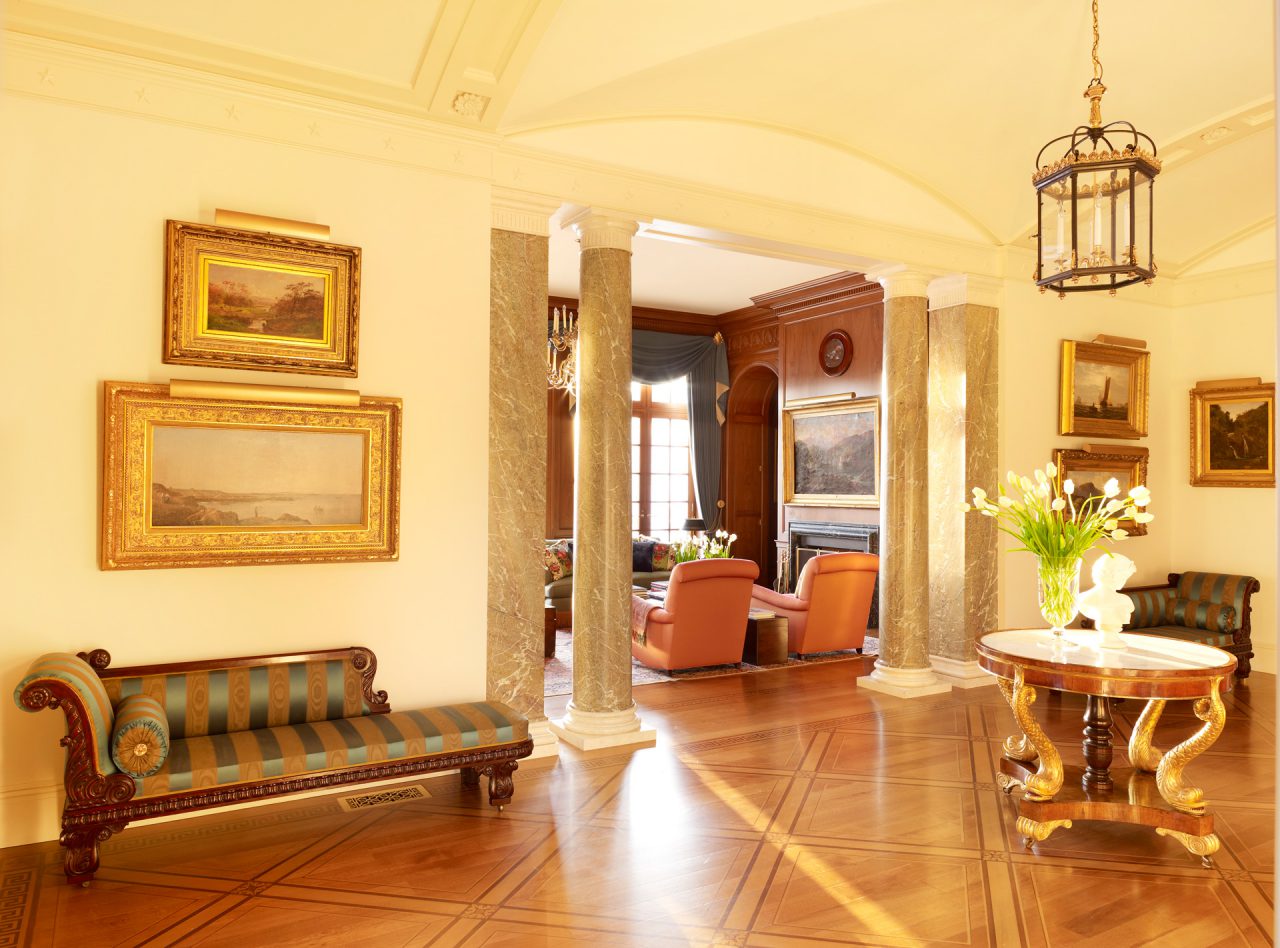 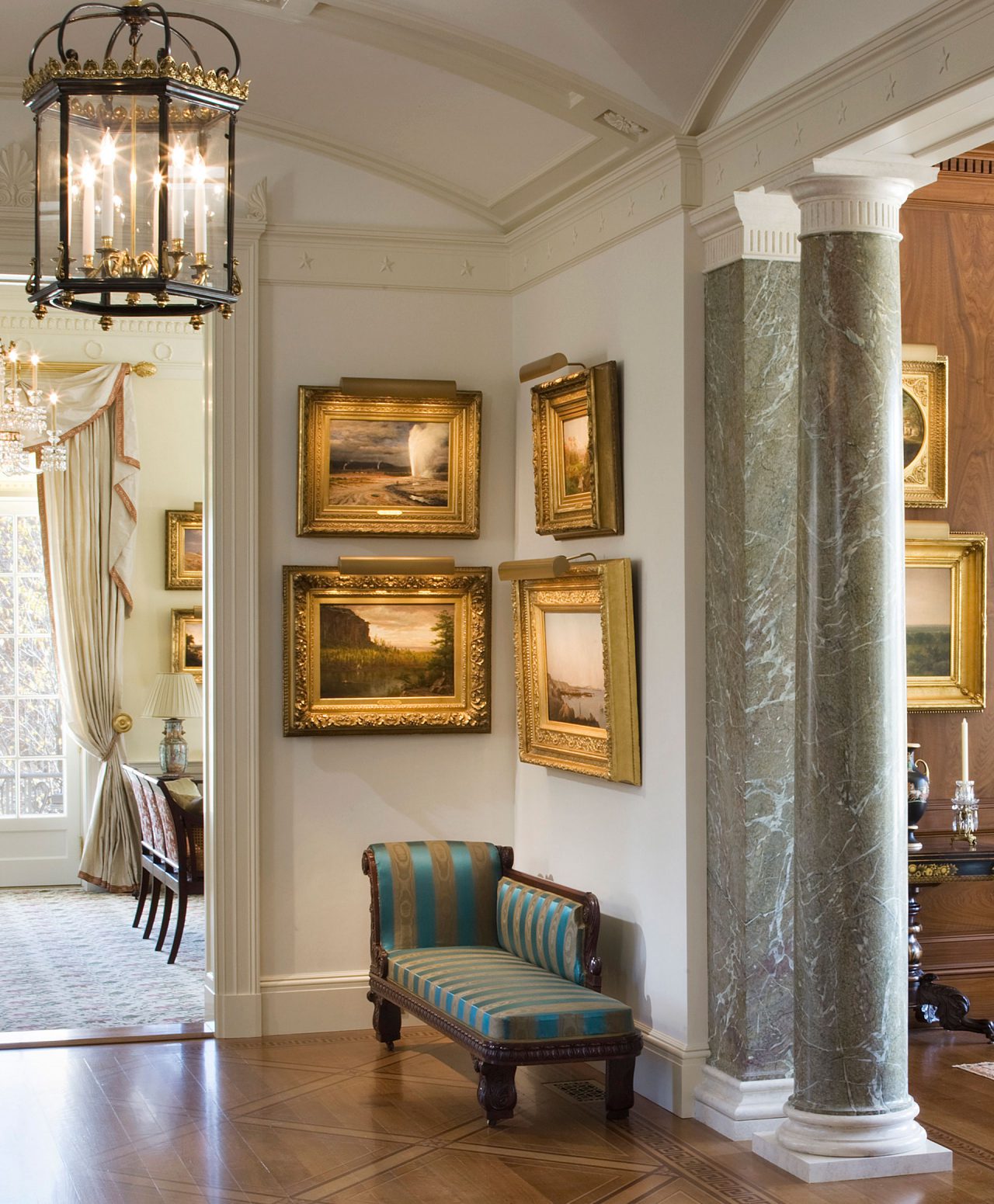 The sculpture Atalanta by William Henry Reinhart sits at the base of the stair. A custom settle follows the curve of the wall and was specially designed for the space. The column tables, also custom designs, are decorated with lion’s masks evoking Atalanta’s mythological fate: after a life of forsaking suitors, she took a lover, Melanion, and as a result, an angry god–likely Zeus–turned the couple into lions. 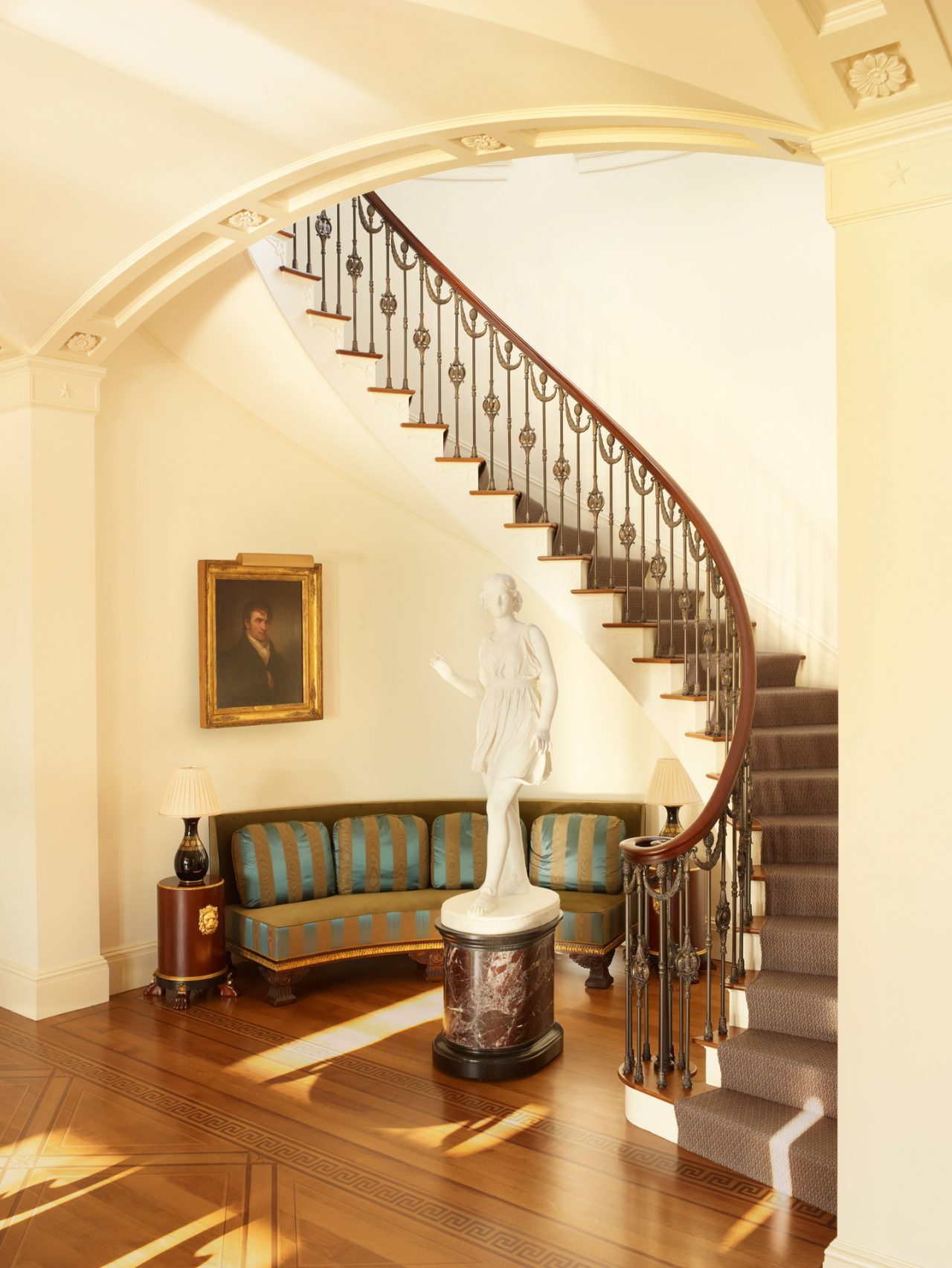 During one of our earliest sit downs to discuss the decoration, our client made the very unusual request to have a formal drawing room in the American neoclassical taste without—notably—the fully upholstered, lounge-like furniture that is now universally expected. The drawing room is furnished with more delicately scaled Federal furniture, including settees by Duncan Phyfe. The room, and greater house, are meant to display an ever-expanding world-class collection of American furniture and paintings spanning the 18th century up to the 1930s. In recognition of that heritage, the interiors are designed to reflect the continuation of Georgian Revival taste. 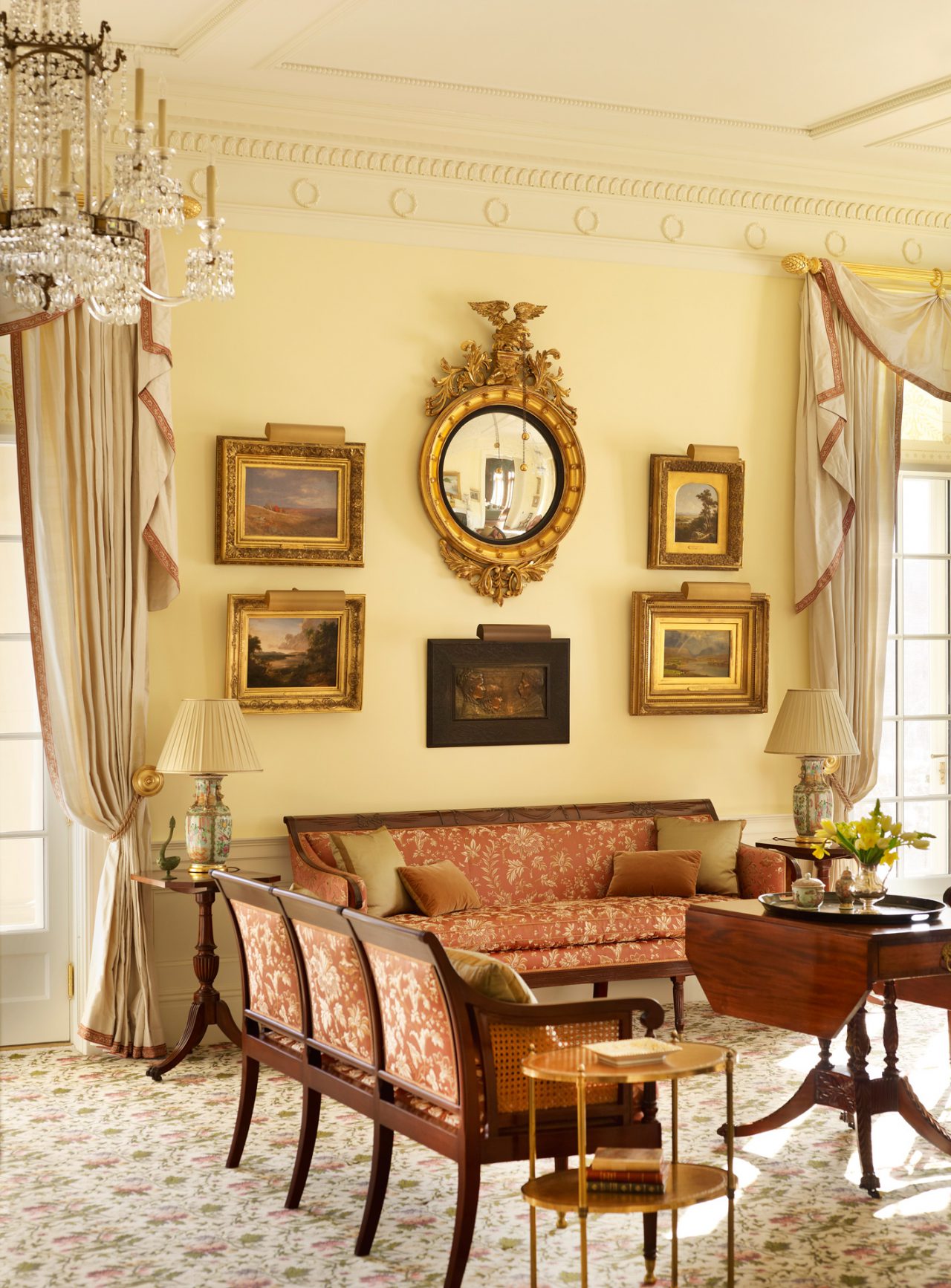 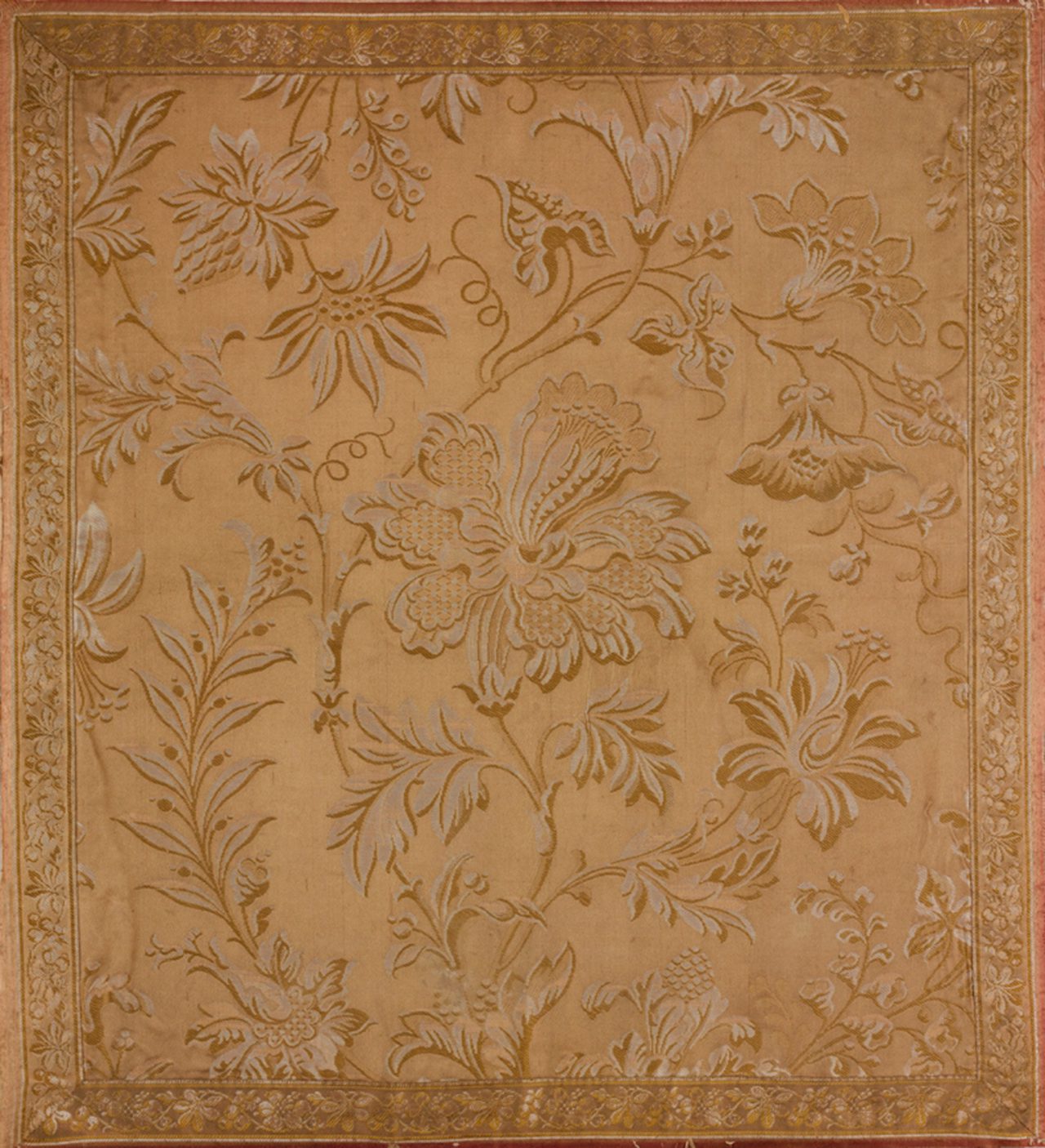 The drawing room upholstery is covered in a specially woven silk lampas made by Prelle in Lyon. The design is based on a fabric once supplied by Duncan Phyfe in 1841. The original seen here can be found in the Metropolitan Museum of Art’s textile archives.

The curtains are based on a model featured in a 19th-century folio of drapery designs. A statue, Pan, by Frederick MacMonnies rests on an ornate ebony-and-giltwood table. 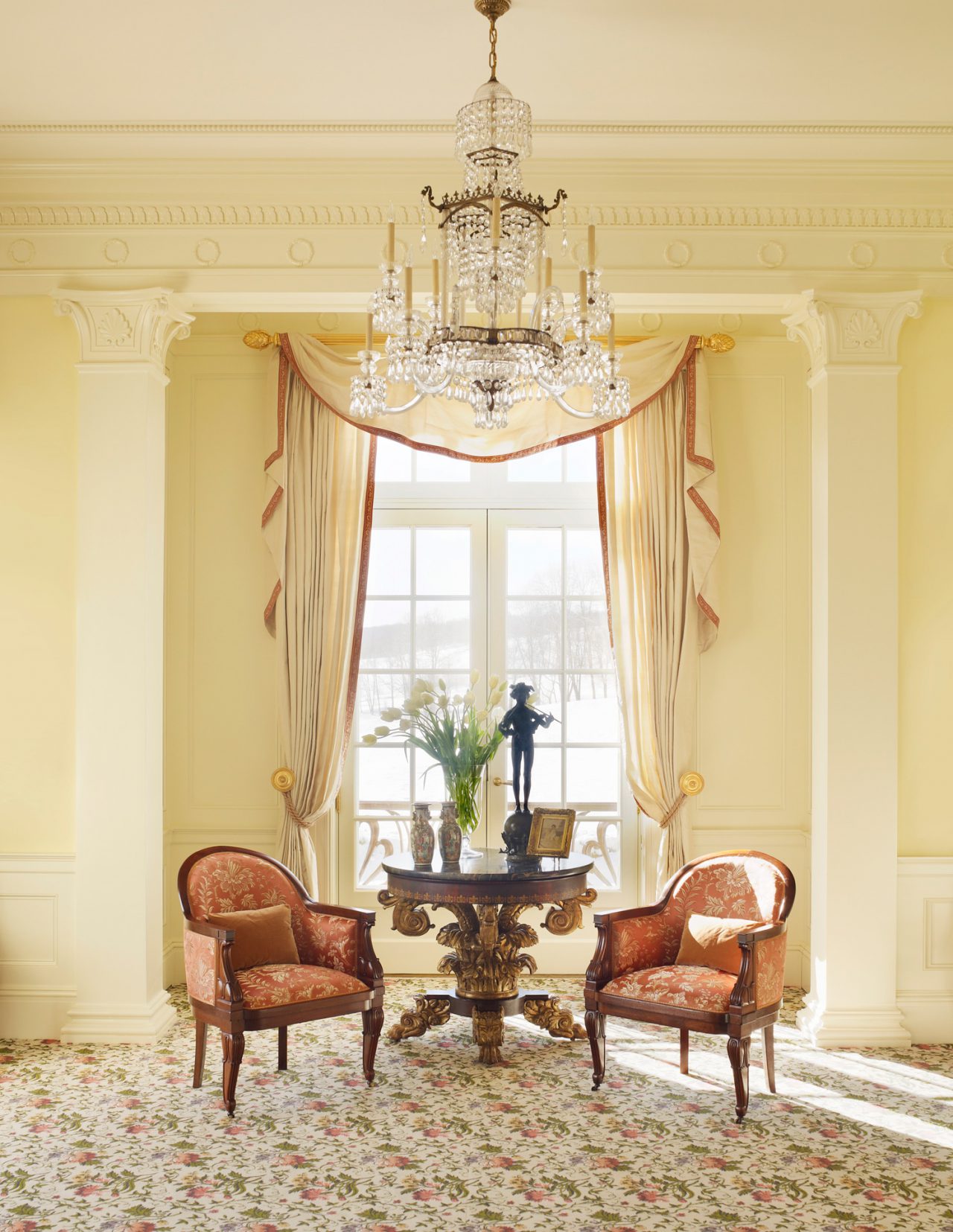 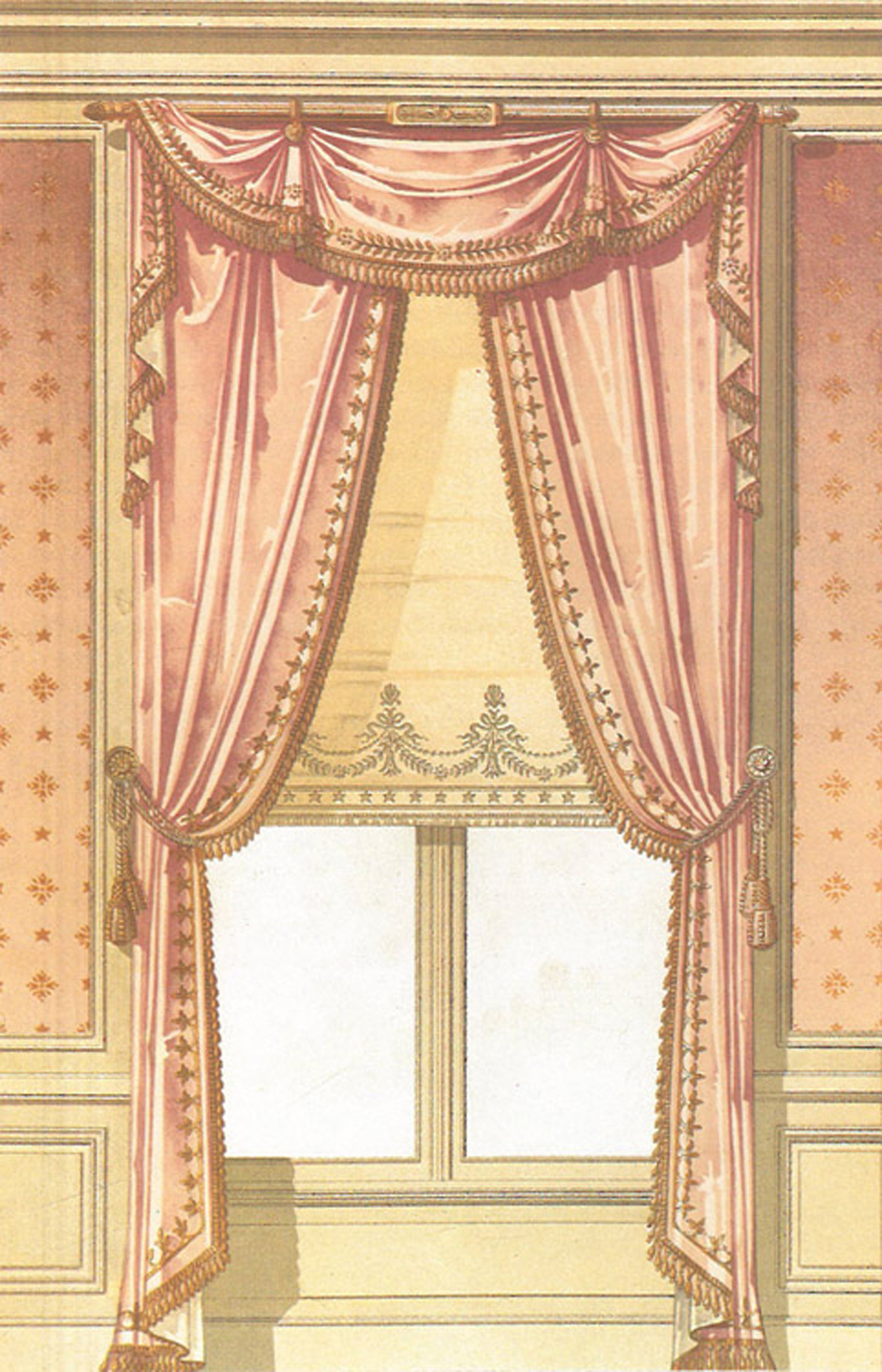 The original drawing-room curtain inspiration also showed window shades featuring a garland-and-tassel design. We replicated this with the help of the artist Lucretia Moroni, who skillfully hand-painted the motif onto the material.

Typically, Georgian Revival rooms of the early 20th century, interpreted from 18th-century models, were red, blue, or green – like the formal rooms of the White House. At Drumlin Hall, we strove to vitalize the interiors by using historic color schemes that were less common. The pink found in the carpet and upholstery and the pale yellow on the walls of the formal drawing room are prominent examples.

We custom-colored an early-19th-century carpet design from the archive of Woodward Grosvenor for the drawing room. The pattern document dates the design precisely to July 6, 1810. Our version features a pale blue green ground with shades of pink and mossy green.
We arranged the Federal-style furniture in the drawing room around an Italian mantel from the 1820s, carved with Vestal Virgins and Mercury. Paintings by American artists such as John Singer Sargent, Childe Hassam, and Maurice Prendergast round out the room’s décor at the highest level. 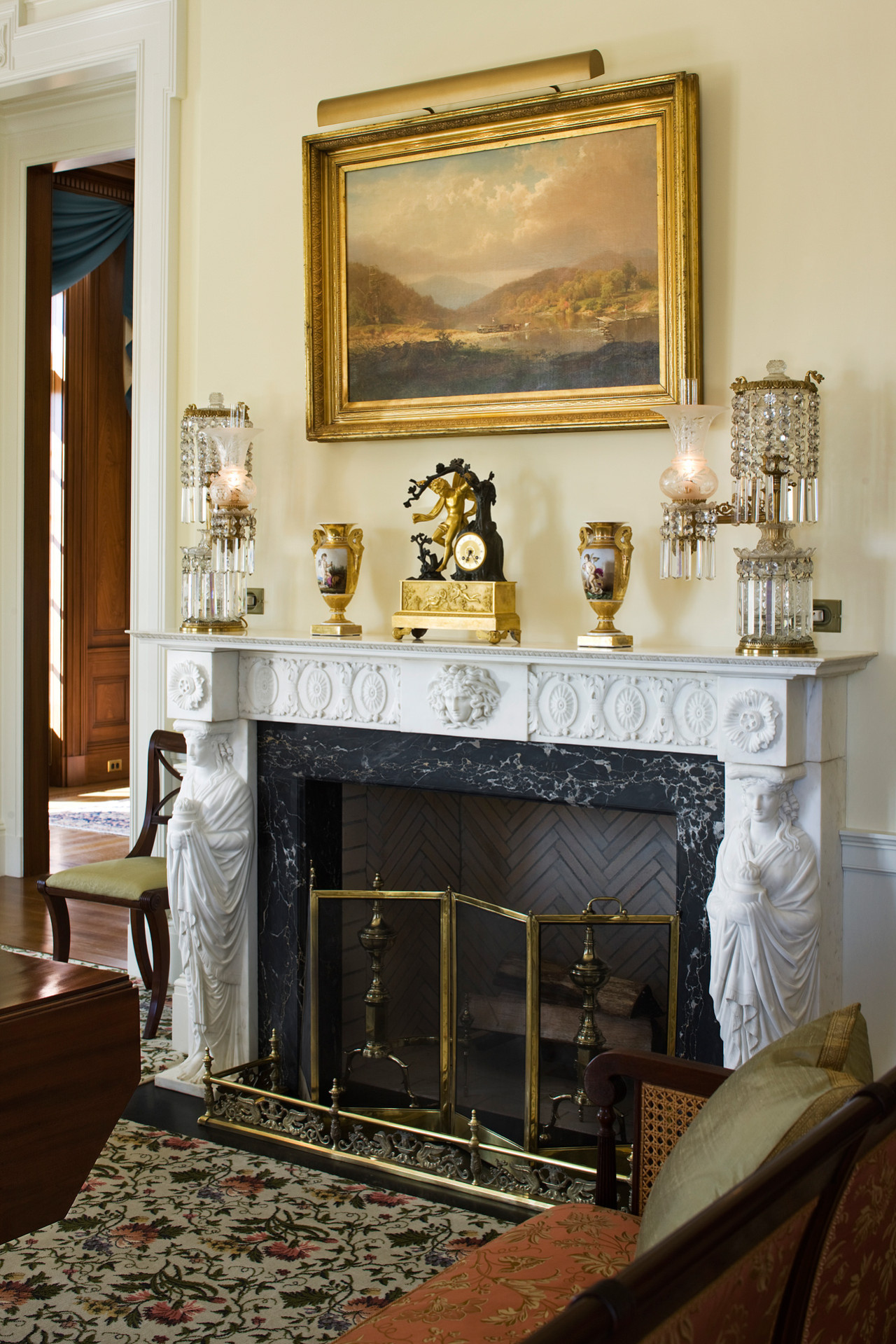 The drawing room and library were designed to complement each other, the drawing room to receive guests on formal occasions and before dinner and the library for more relaxed occasions and after dinner. Hence, the library is furnished entirely with comfortable upholstery. In a nod to the 20th century, there is a television concealed behind the painting over the fireplace. 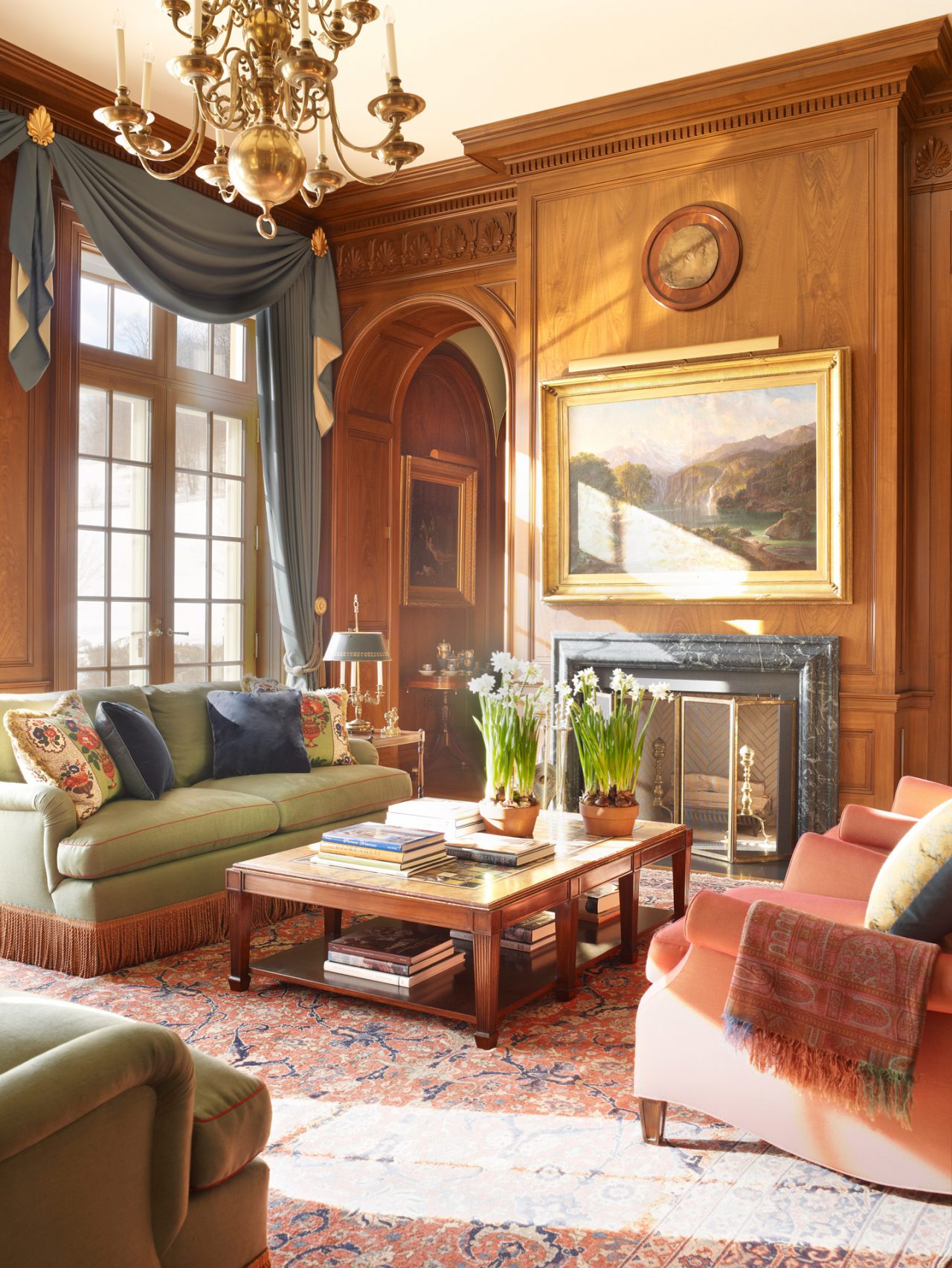 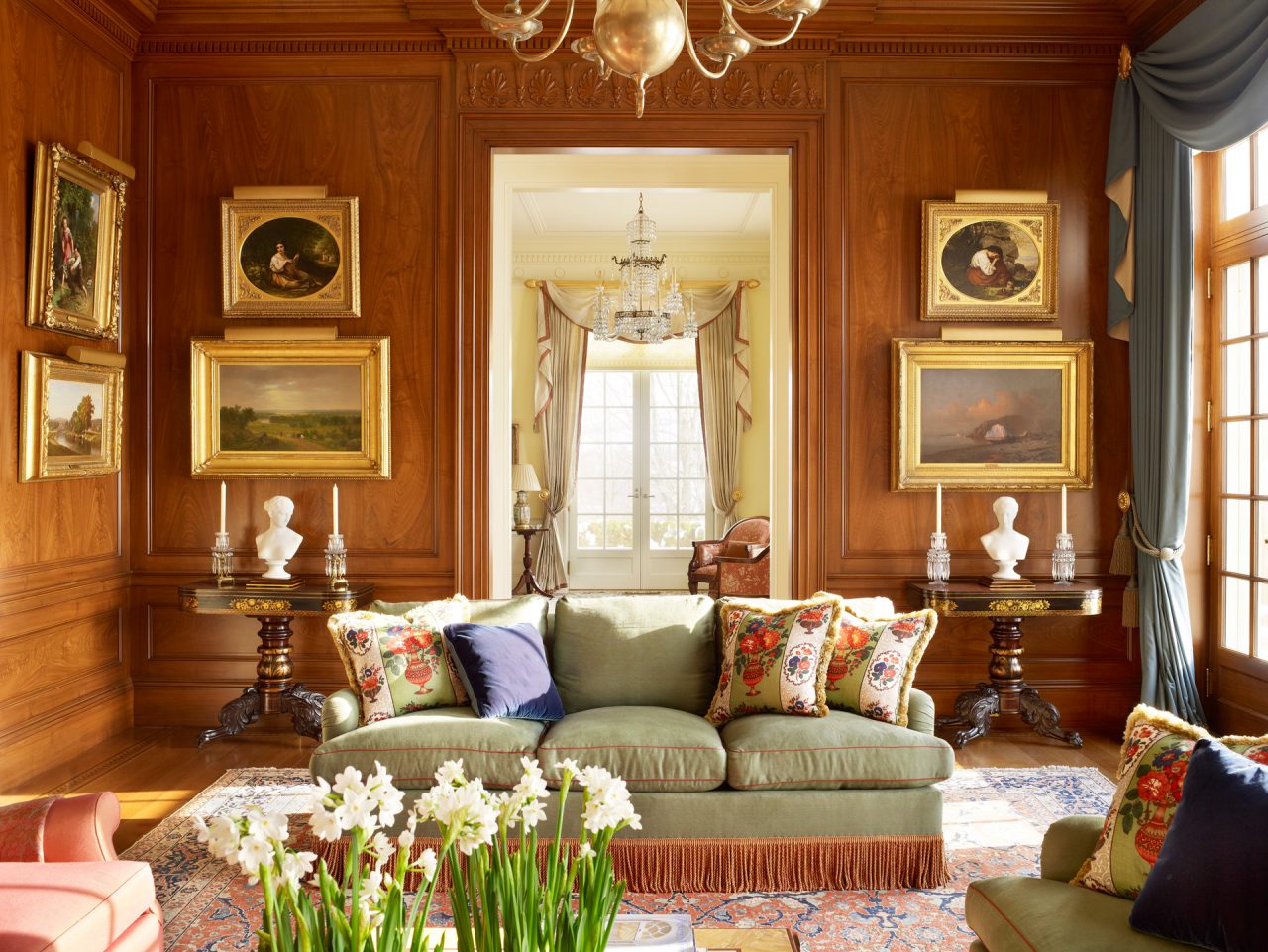 Sculptures by Hiram Powers and paintings from the Hudson River School are highlighted against the walls, which were painted using a 19th-century technique to resemble walnut.

The breakfast room is encircled by French doors framing an idyllic view of the countryside. Curtains and sheer panels are hung from a double set of brass rods following the curve of the architecture.

The second-floor stair landing off the master and guest bedrooms serves as both a picture gallery and informal sitting room. The Empire sofa, chosen for its sculptural appearance, is paired with club chairs with soft silhouettes. A portrait of the Livingstons, a prominent New York family with roots in the state going back to the 17th century, is hung above the sofa and adds appreciably to the atmosphere of the room. A generous skylight within a vaulted ceiling lights the area.

The master bedroom incorporates hand-painted paper by De Gournay based on 19th-century aquatints that we customized with nearby landmarks like Montgomery Place and Olana, the home of Frederic Church (several of whose paintings are part of our client’s collections). This paper serves as a fitting homage to the great houses of the Hudson River Valley and very much reflects Drumlin’s position among them. 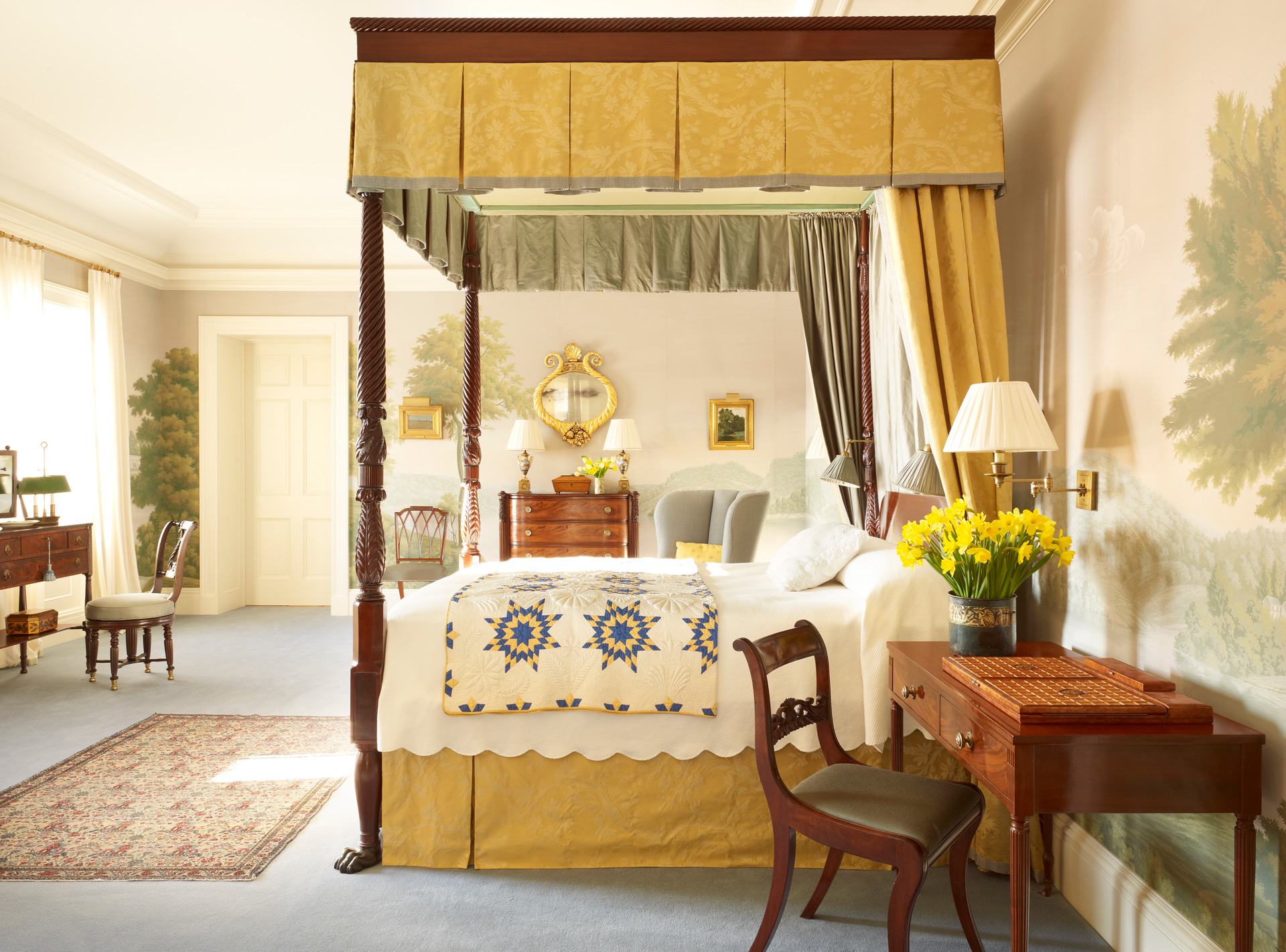 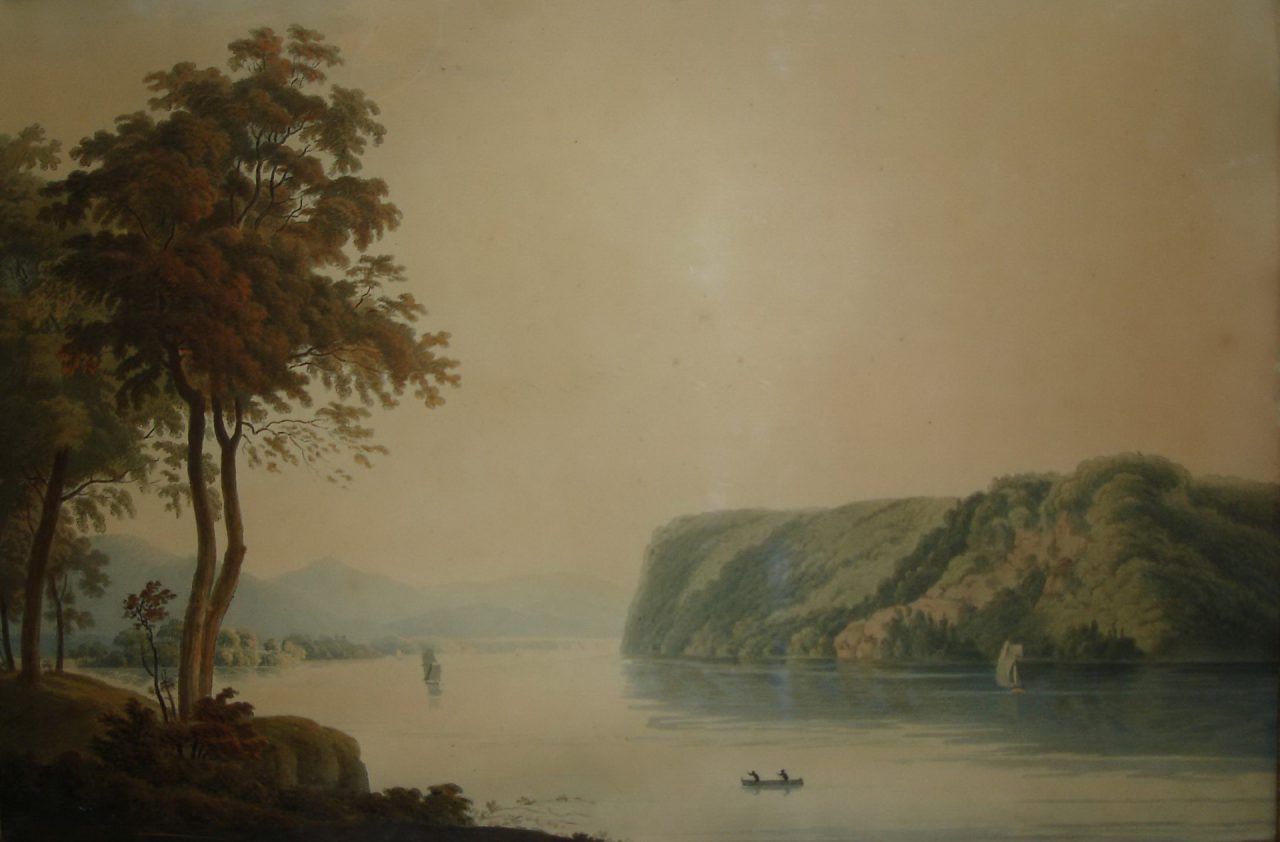 Aquatints of the Hudson River were helpful guides for geography and plant life typical of the area in creating the master bedroom mural.

A comfortable wing chair sits in a corner of the master bedroom. The portrait above the chair is by Mary Cassatt. 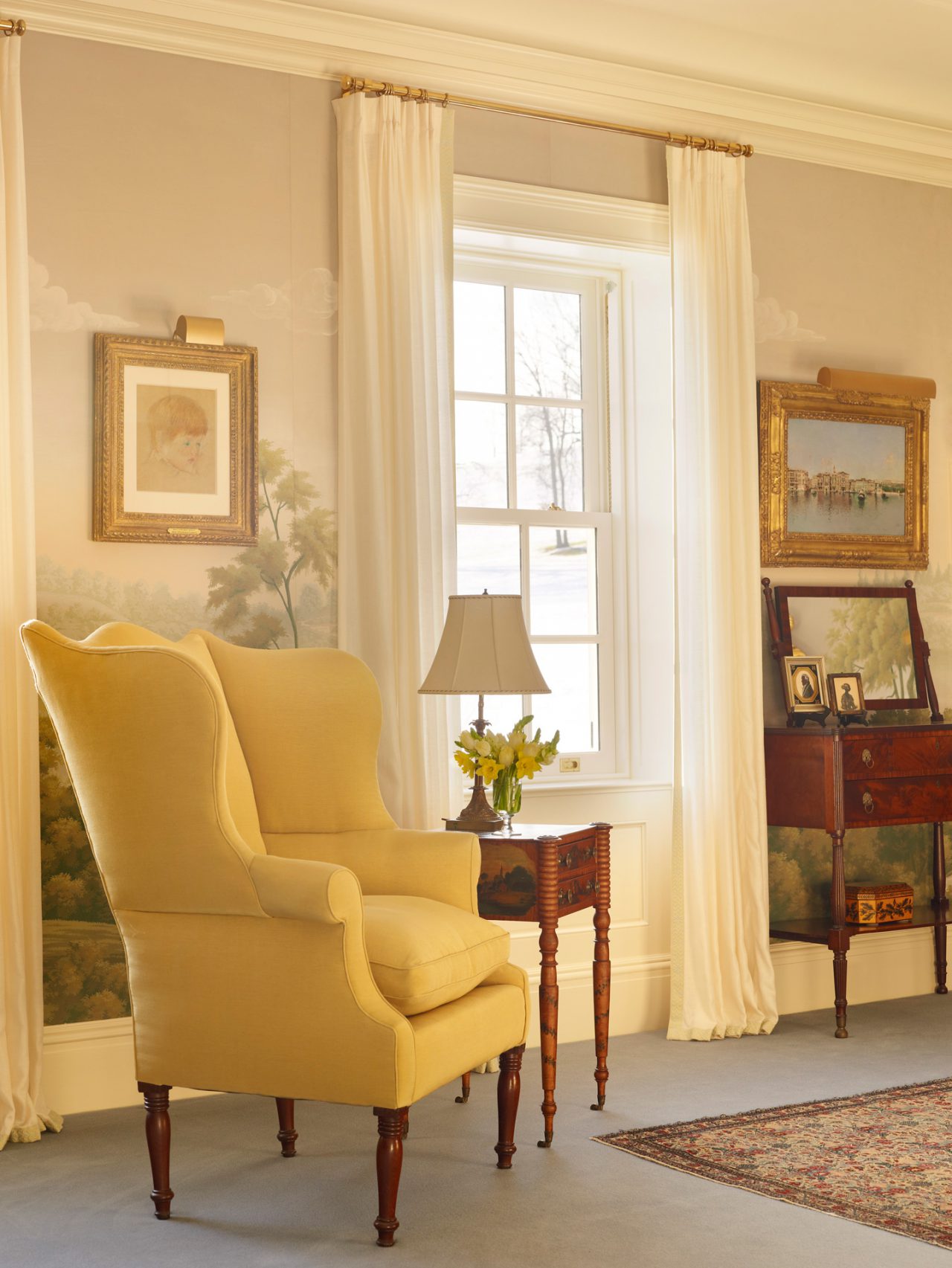 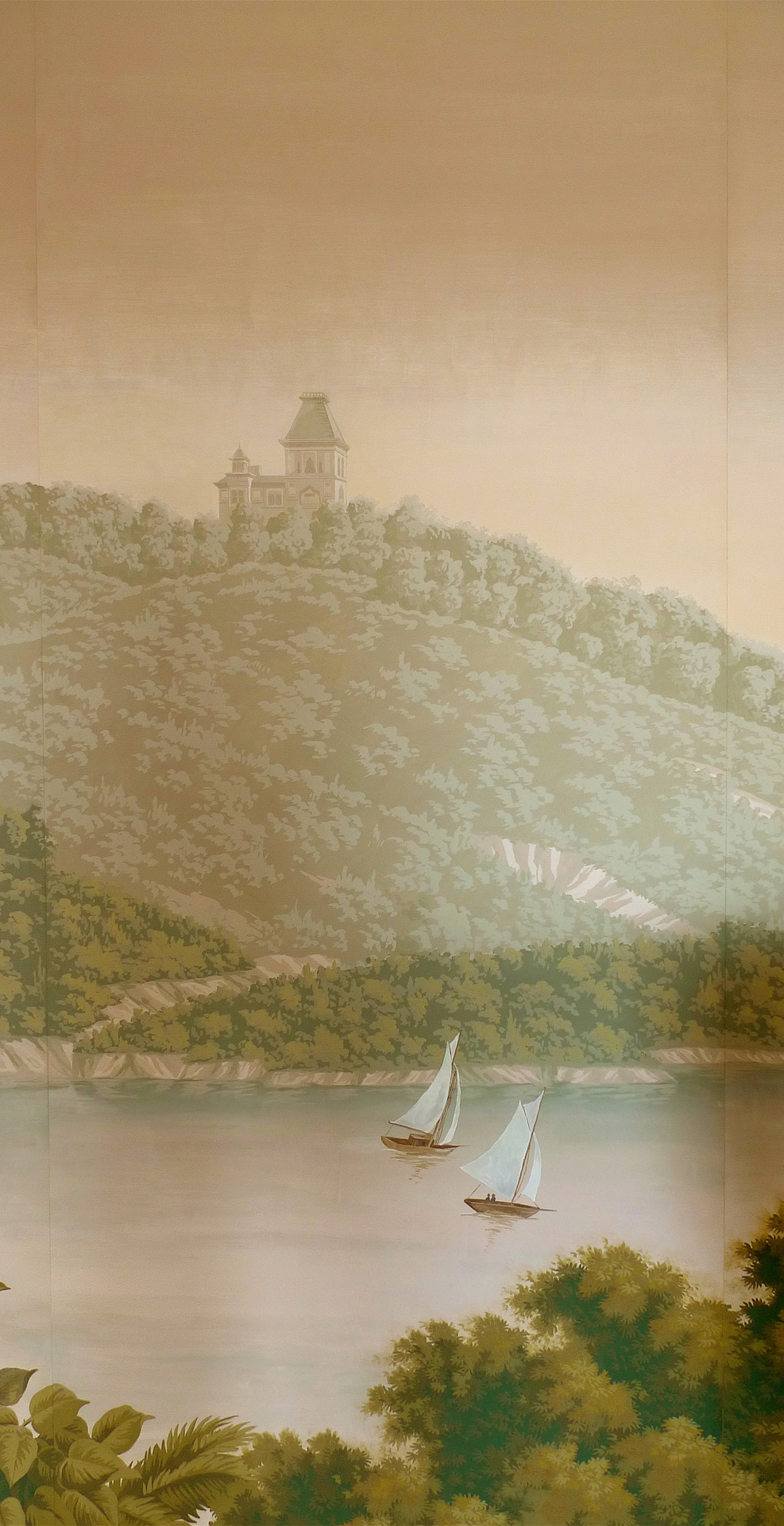 One section of the master bedroom’s mural panels shows Olana rising above the Hudson.

A guest room has custom-colored wallpaper with a blue ground and a subtle flower pattern in green and soft gold.

The gun room is located off of the entrance vestibule. The cabinet and other prominent pieces throughout the house, such as the reproduction settees in the drawing room, are by the present-day master furniture maker Harrison Higgins.