Houses in coastal Maine are forced by necessity to have practical exteriors with simple details in low relief to deflect the harsh winter weather. In contrast, their interiors often feature handsome volumes and refined elements, such as classical mantels, cornices, and paneled walls. Many rooms have nautical qualities—derived from the region’s maritime tradition—and stunning water views. This new shingle style house that we decorated for a sailing family embraces many of the local traditions.

Peter Pennoyer designed the house using a restrained version of the Shingle Style, which the summer people had favored for building houses on the island since the turn of the 20th century. The plan follows the geography of the curving bluff. Rooms angle out toward the view and seem almost to sail on the water.

The dining room at the center of the plan (shown at top) is perhaps the most nautical and recalls the wheelhouse of a boat. It is painted ivory to frame rather than contrast with the view. It features a large bay window with a set of custom benches, which follow the arc of the curve. The blue glass candelabras are from the clients’ collection of antique colored glass.

The opposite side of the dining room has a quieter decorative treatment to balance the dramatic views from the bay window. The neoclassical chairs are painted in shades of blue and green, giving them a nautical feeling. Their seats are covered in a pattern of eucalyptus leaves—in part a bow to nature in general, but also to the clients’ time in California. The sconces carry the nature theme further with woodland scenes and images of Native Americans etched on the glass.

The living room has remarkable views on two sides. We furnished it with large old-fashioned sofas that we covered in red wool. Elizabeth Eakins made the carpet, which is based on early American hooked rug patterns. The scale of the design and its artisanal qualities have the vigor to balance the view. 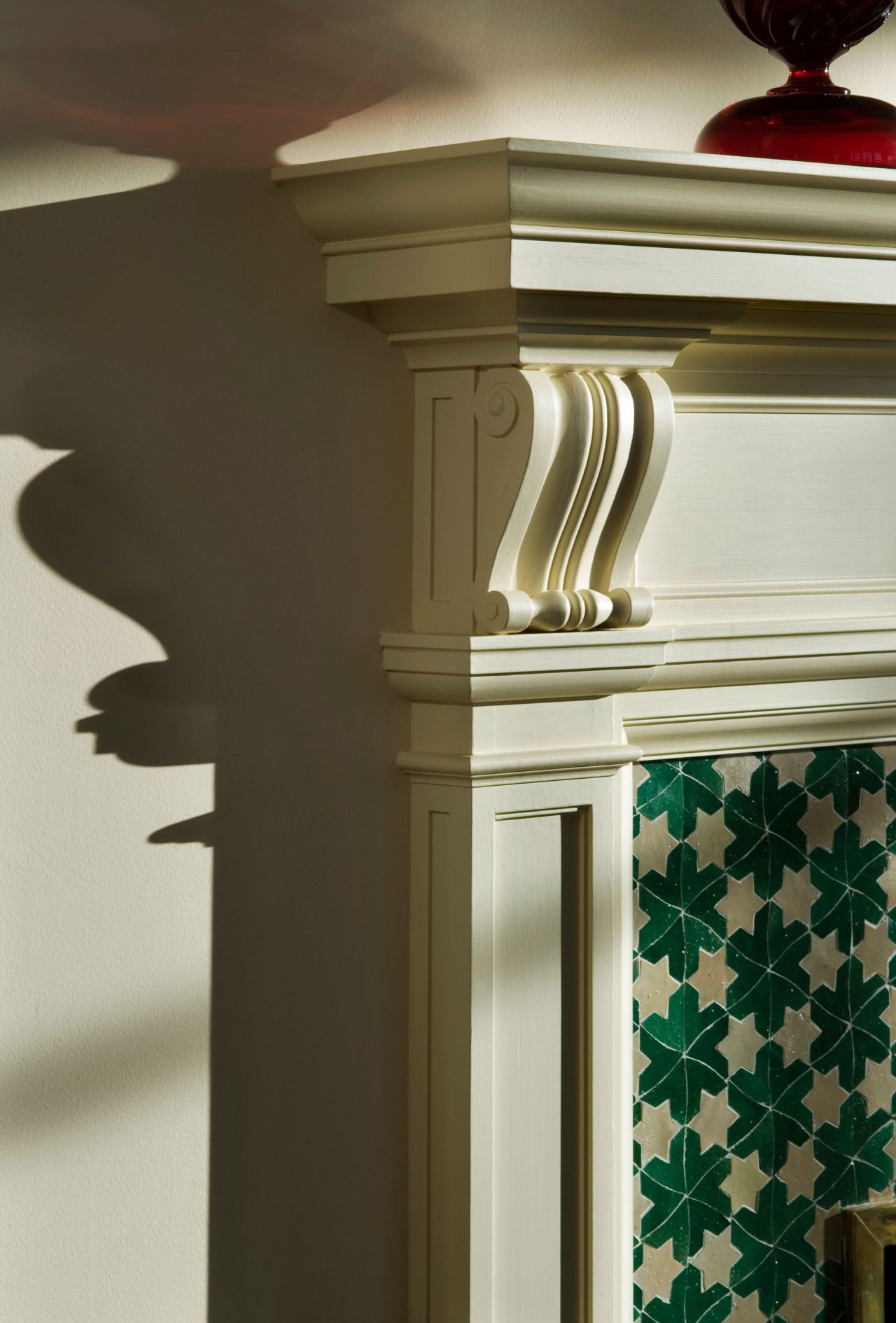 The living room mantel is decorated with green and white Moroccan tiles. Their craftsmanship and the subtle beauty of the paint glaze give off a subtle glow.

The library is the only inward-facing public room and is intentionally introspective. Panels of red linen curtains—the only dramatic window treatments in the house—set in arched reveals screen the view. The bright, old-fashioned turquoise used on the paneling was a color popular in 18th-century Georgian houses, as well as being a subconscious nod to the ocean beyond. The wall and curtain colors are repeated in the Tabriz carpet, which was custom-designed for the room.

The breakfast room has chairs copied from 18th-century New England originals. The windows are fitted with glass shelves to display collections of colored glass—a device popular with early collectors of Americana. 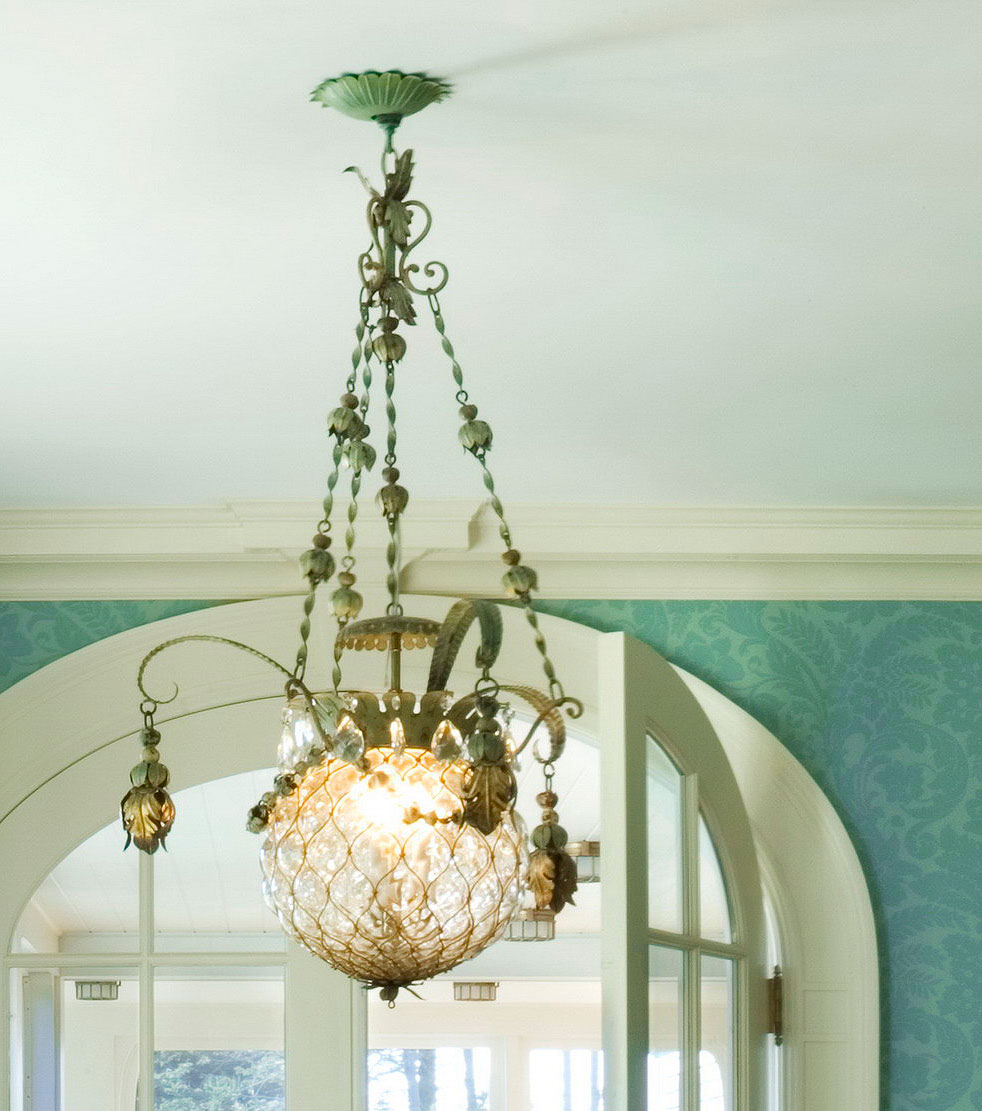 The whimsical breakfast room chandelier is made of tole and takes the form of a stylized pineapple. It was made in Italy in the mid-twentieth century.

In the bedroom, we adapted historic paneling from the Isaac Bell House in Newport, Rhode Island. These remain spirited copies rather than literal – too often exact replicas come out short or feel out of sync with their surroundings. The bedroom is furnished in a 19th-century fashion with a pair of antique upholstered chairs, a ship model, and old quilts and hooked rugs.

The master bath is simply configured around its spectacular view. The ceiling is papered with a pattern of leaves and birds. 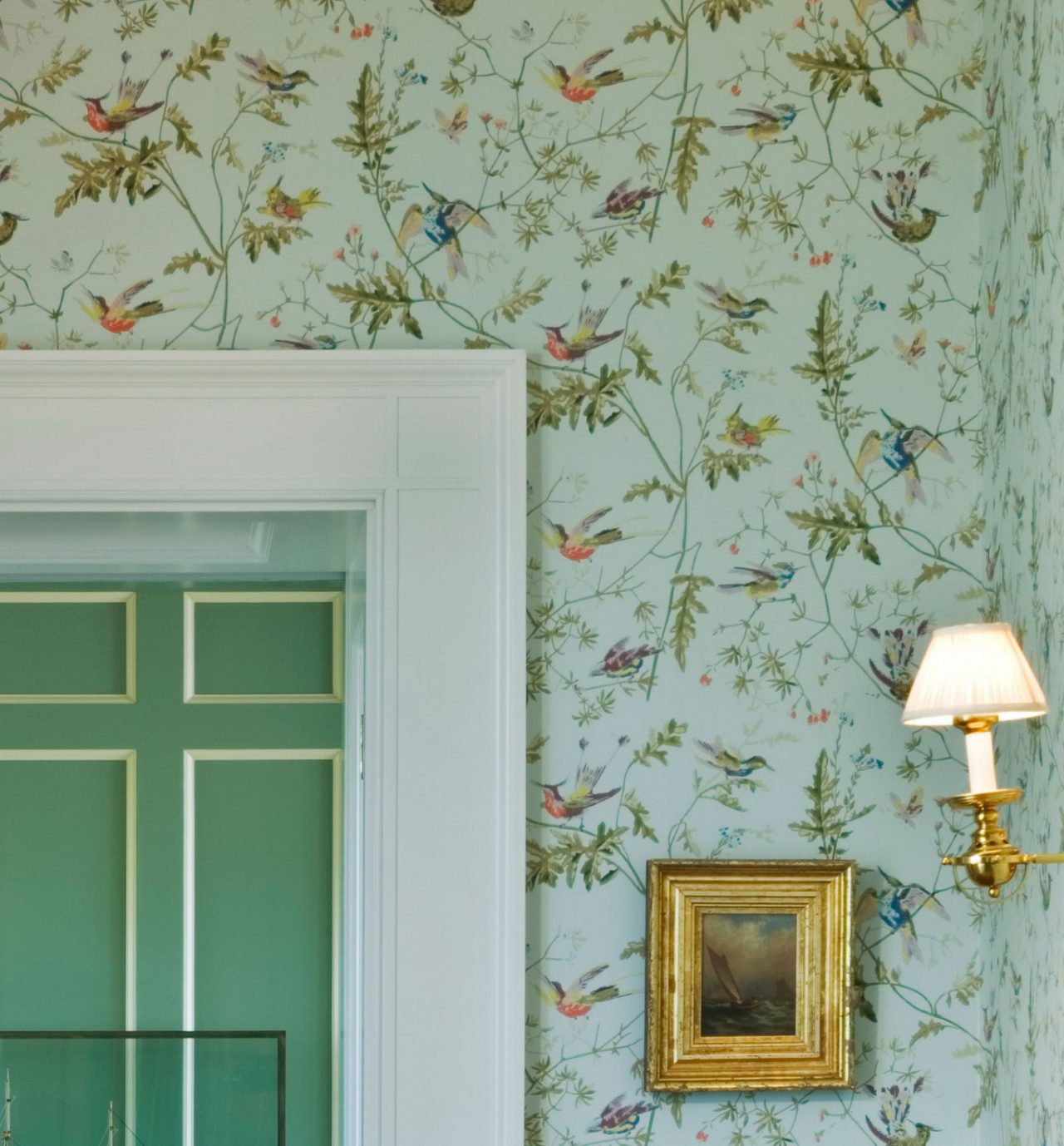 The same paper on the bath ceiling appears in the bedroom halls, bringing some of the same light, happy spirit to a windowless passageway.

The double-height paneled entrance hall has a round mahogany table centered on a large patterned Hamadan carpet. A collection of antique Chinese porcelain jars complement the colors in the rug.

The rear entry hall is the less formal entrance. The walls are covered in a combination of blue grasscloth and Butterfly Chintz wallpaper by Adelphi Paper Hangings. The clients’ collection of framed kimono stencils are hung along the staircase wall. 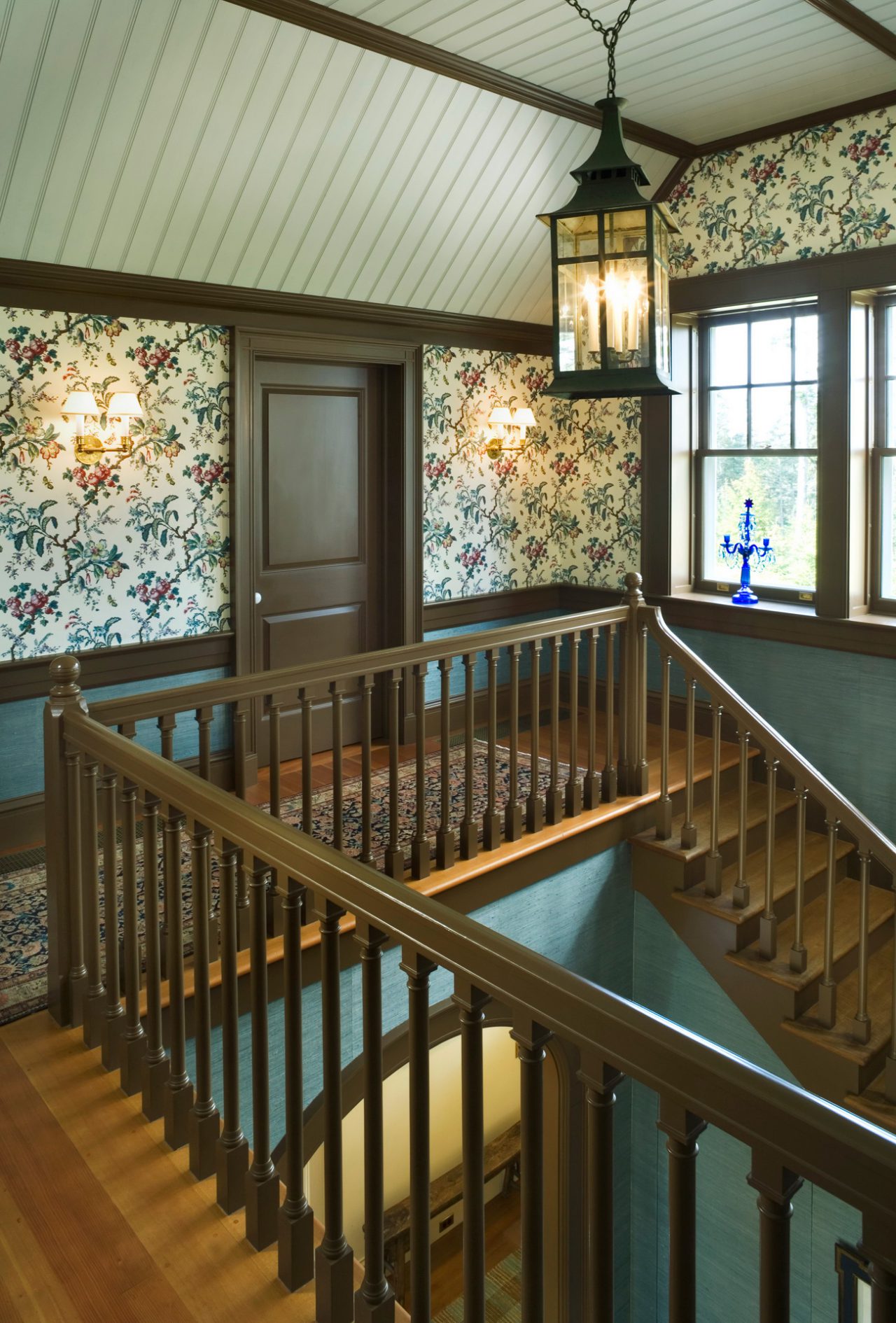 The upper story of the stair hall shows the continuation of the grasscloth and wallpaper. The color of the doors, trims, and stair railings is derived from the wallpaper.

This small sitting room is an assemblage of decorative elements, including a Victorian stained glass lantern, Persian Karabagh carpet, and Anthemion frieze border by Adelphi Paper Hangings applied under the ceiling moldings. 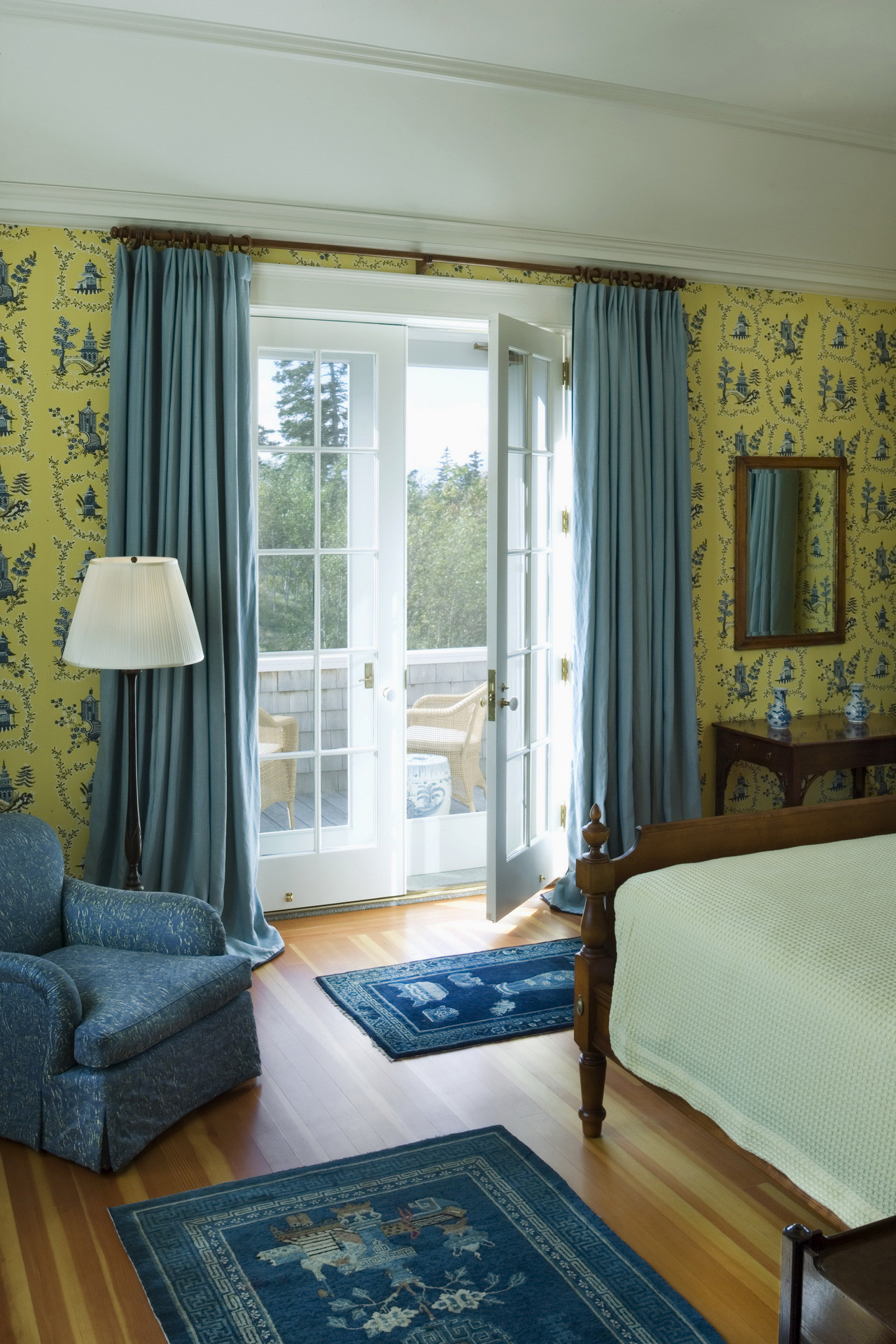 A guest bedroom has a block-printed pagoda-patterned wallpaper. The blue in the paper is complemented by blue serge curtains and upholstery and small Asian carpets.

A large wraparound porch is the favored area for dining in the summer. Its decoration is meant to serve as a quiet backdrop for taking in the scenery. The furniture is painted shades of blue inspired by those found in the colored glass collected by the client.

Every room has its own character, including the coatroom off the entry hall. Bright blue paint on the floors, iron red on the walls, antique furnishings, and a needlepoint carpet elevate what would ordinarily be an afterthought space.