This project—the president’s house at a New England university–required great sensitivity in its handling. The historic house could not just be viewed as a private residence, but more as a place that belonged to the students, most of whom visit the house at some point in their academic career. We also made every effort to use the resources of the school, which had exceptional holdings of art and antiques. Our hope was to create rooms that would provide comfort to the president and his family as well as convivial, appropriate spaces for events and gatherings attended by the students, alumni, faculty and the greater community at large. 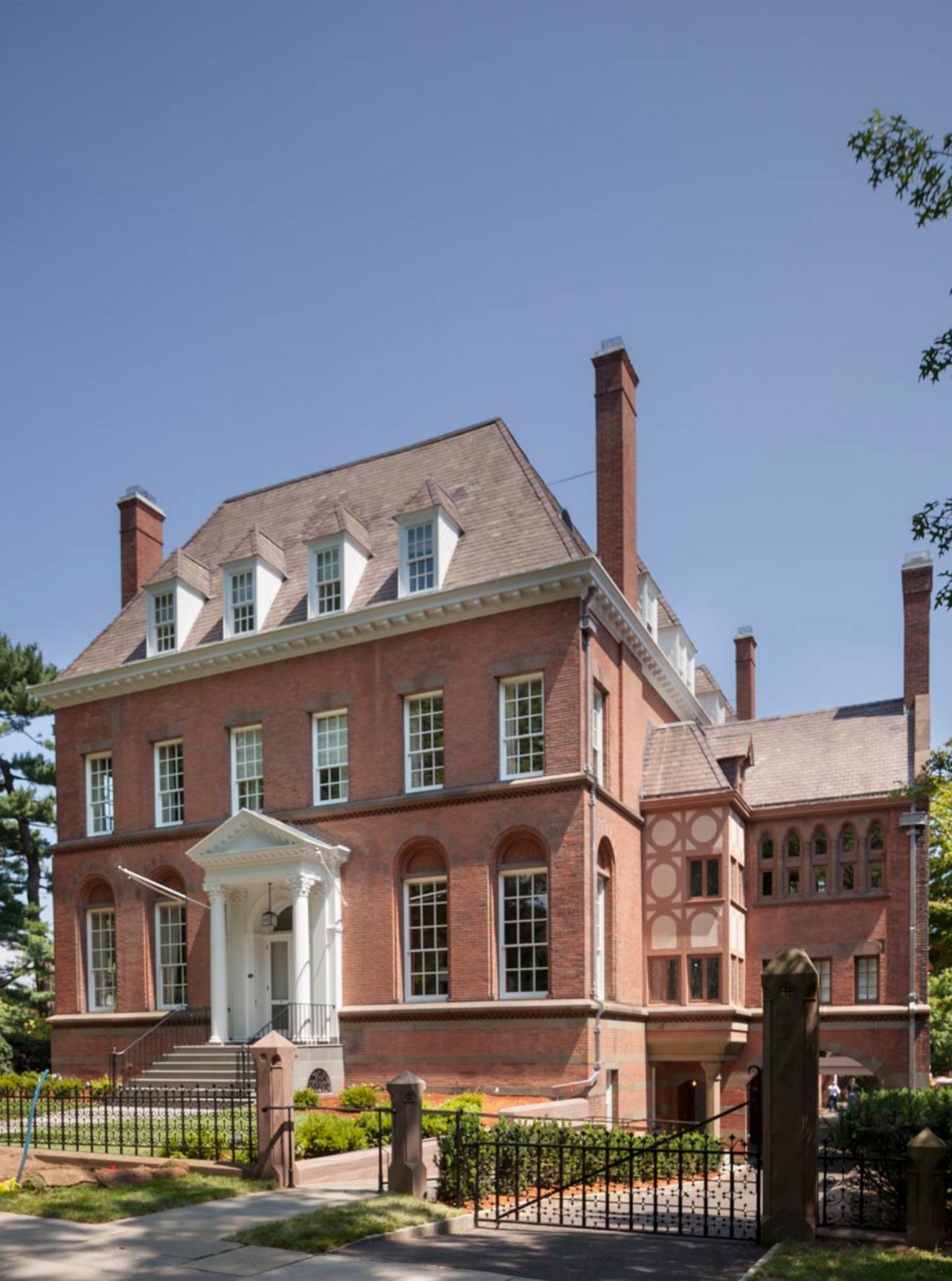 The President’s House was built in 1871 by a noted local engineer and surveyor who donated the house to the school in the 1930s. Originally built in the Victorian Gothic style, it underwent a transformation to the Colonial Revival style during the Great Depression, when the first president moved in. The building slowly declined over the decades, and it was not until 2012 that its first major renovation took place. We worked closely with John B. Murray Architects to ensure a respectful restoration that would stand up to the heavy demands made on the house.

The public rooms of the house would receive the most traffic, so the decoration needed to be resilient. Yet, that did not preclude introducing custom details that would make the rooms special. In the dining room, we commissioned a large damask wallpaper that was printed blue on blue so it would not overwhelm the space. It became the perfect foil for modern works from the school’s art galleries. Shown here is Fragile Blue, a painting by Gene Davis, and at top is a view of the dining room with a Franz Kline painting above the fireplace. 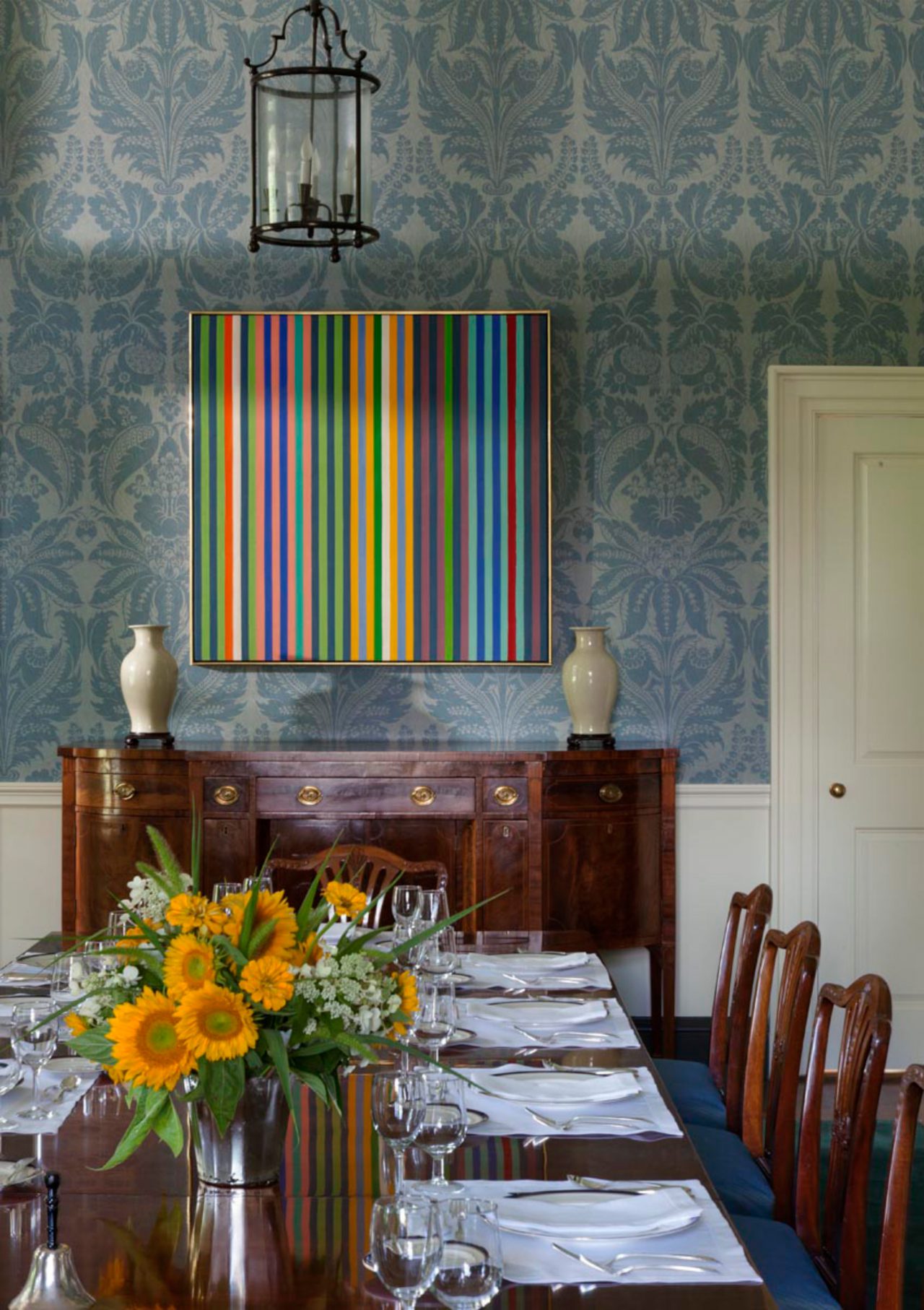 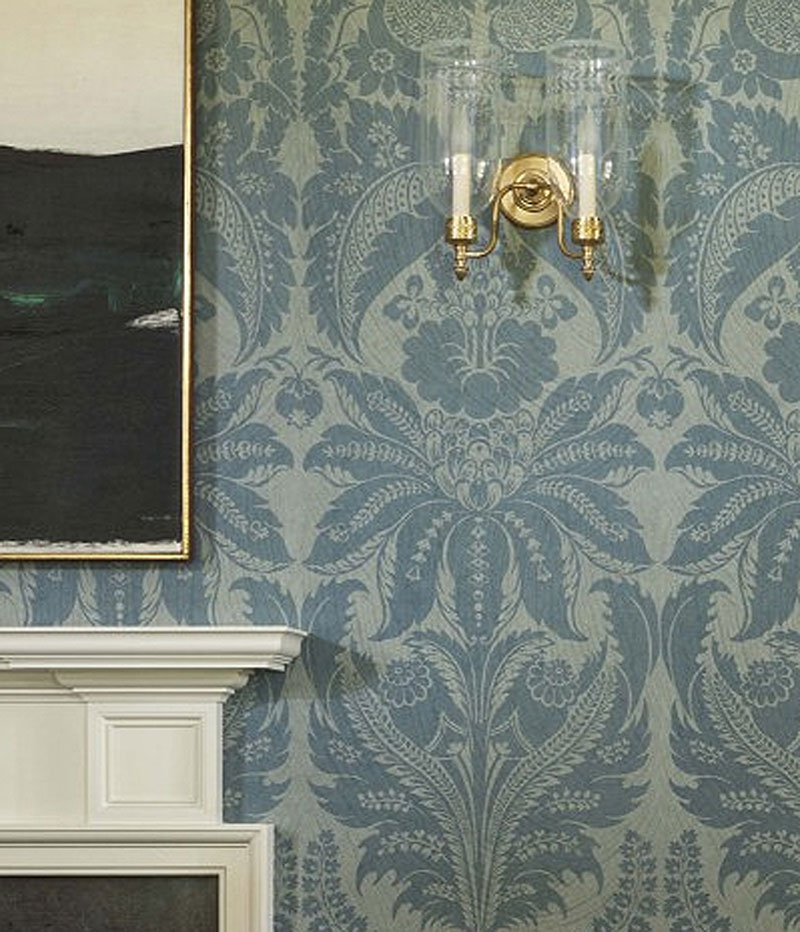 The dining room wallpaper was block printed by Peter Fasano and was specifically designed for this room.

The wallpaper is balanced by the abundance of architectural detail and generous light coming in through the French doors. The hanging lanterns are reproductions of ones designed by esteemed architects Delano and Aldrich.

The living room is large to accommodate many guests at once, with multiple seating groups and plenty of surfaces for placing drinks. Part of the importance of the restoration was to bring the heating and air conditioning systems up to present-day standards of art conservation, so works of spanning centuries could be securely shown. Flanking the fireplace are works by the 18th-century English painters George Morland (left) and Richard Wilson (right). 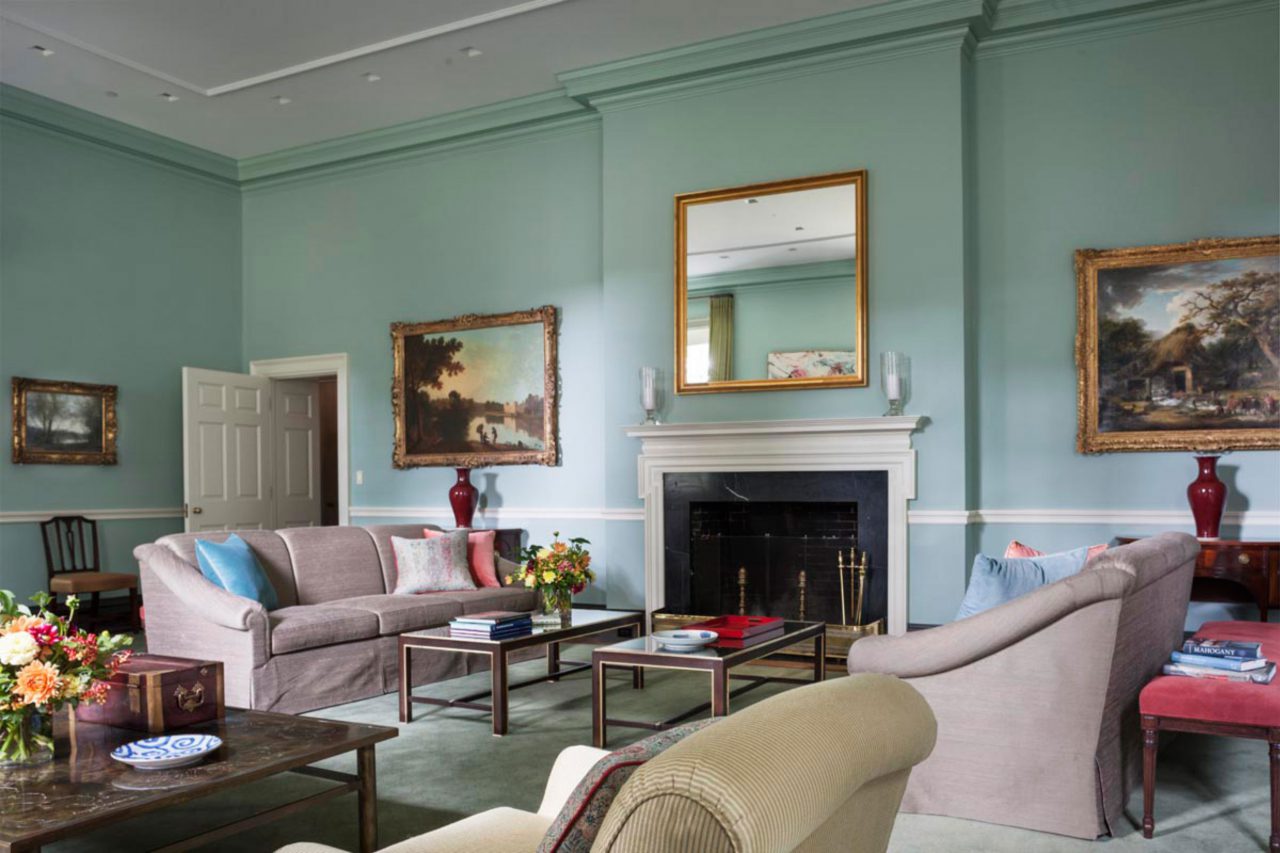 The living room’s upholstery is neutral, but a sumptuous shade of blue green on the walls ties it all together. William Ronald’s Zoraster painting between the windows counterbalances the portraits and landscapes and adds punch.

The public rooms form an elegant enfilade of spaces, the entry to each room handsomely highlighted by well-proportioned doorways and framing, as shown here from the living room to dining room. The two paintings at left, Mrs. Bentley and Mr. Bentley, are by Francis Wheatley.

A small sitting room adjoins the opposite end of the living room. It features a classic arrangement of four upholstered chairs around a center table. The space is used for informal meetings or private conversations, offering a more comfortable alternative to an office meeting room.

Another offshoot of the living room is this small parlor. It is a departure from the blue-green colors that precede it, taking its bold mix of yellow, blue, green, and red from the antique carpet. This small room with its deep wing chairs and sofa is a charming retreat from the goings-on just outside its door.