This house in the seaside resort of Southampton, New York has an ideal location between the ocean and bay. It is most definitely at the beach, but also part of a community where people still get dressed up for cocktails and dinner, and thus require handsome rooms for entertaining. Central to this house is a grand drawing room that is a balance between a traditional drawing room and the less formal living rooms more popular today.

The house was designed by architect Peter Pennoyer, who rebuilt the structure from the ground up using the prior house’s footprint as template. The shingle design is a masterful play of volumes and forms, its plan maximizing the relationship between the house and siting.

The core of this house is the relationship between the formal drawing room and informal adjoining sitting room. The drawing room strikes a balance between an old-fashioned receiving room from an early-20th-century formal house in contrast to the more relaxed beach house of today. An old carpet is the focal point of the design. In this case, it is a worn 19th-century English Axminister rug with an antique-red ground, once the foundation of a very formal room on the scale of a great British neoclassical country house by Robert Adam. Now relaxed by age and wear, it serves to balance Peter Pennoyer’s classic but streamlined architecture.

The tall French doors opening out to the views of the ocean are framed with subtle touches of pink and green —the curtains are trimmed in a pink-and-green tape and the rings are painted pink—reinforcing the resort quality of the room. Pink and green has been a long tradition in storied resort towns like Southampton and Palm Beach, and here offers a fresh recollection of a classic and beloved color combination. The furniture in the room is classical, with new armless chairs and the linen-wrapped low tables to update a furniture plan that accommodates large groups with convivial arrangements.

The buoyant nature of Matisse’s famous Jazz series on the walls also serves as a foil to the formal decoration.

Just beyond the drawing room is an informal sitting room, which opens onto the porch and swimming pool.  A bamboo table and simple seagrass carpet with a leather border give the space a beachy quality, but to provide a visual balance between the two rooms, the curtains have been richly appliquéd and embroidered with a Georgian pattern of the same period as the antique carpet in the drawing room.

The elaborate curtains feature a border design that was taken from a 19th-century pattern book, enlarged to suit the space. The same subtle pink-and-green color scheme is carried to this room as well–the curtains are hung with pink rings and the trim features pink flowers on green lines. 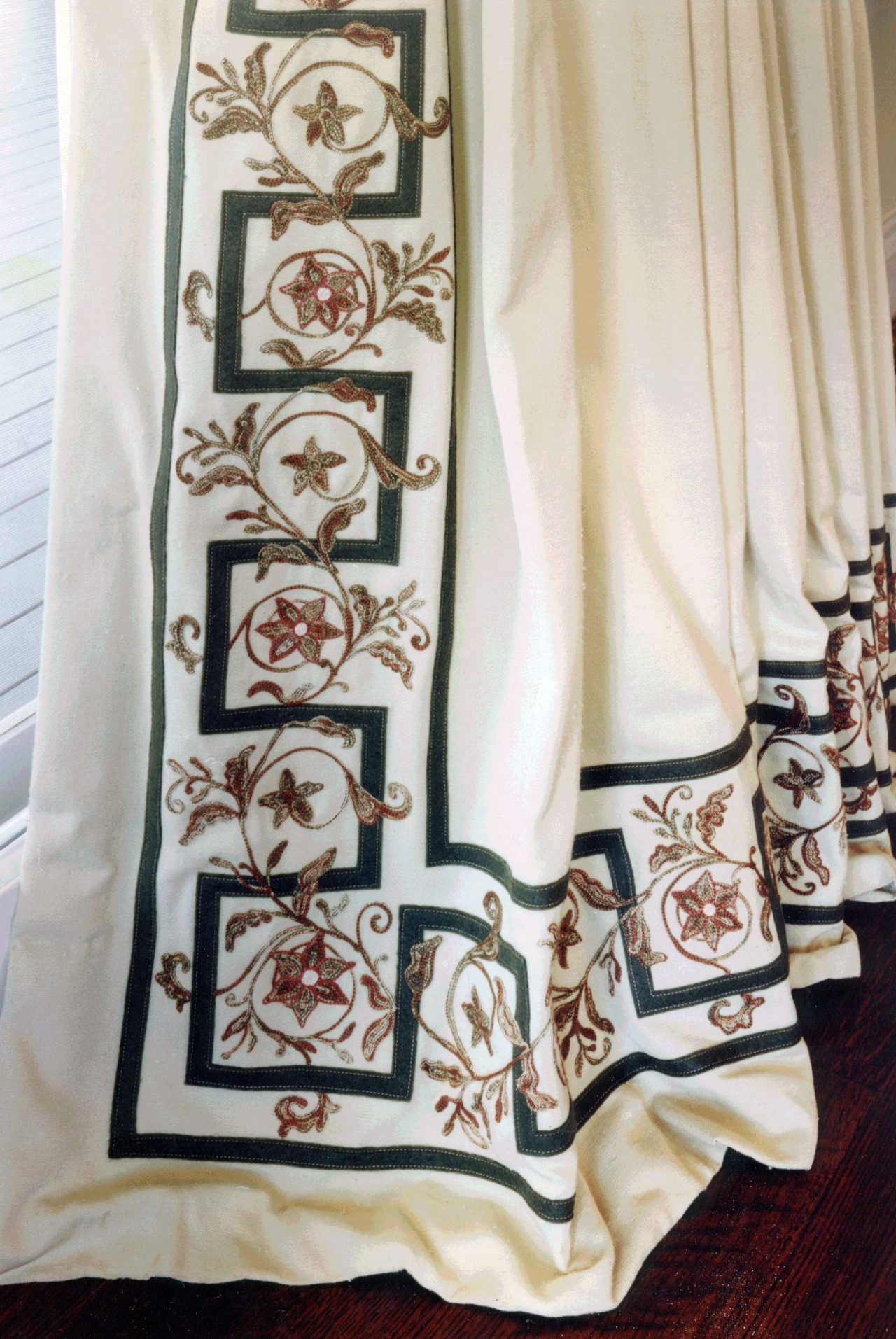 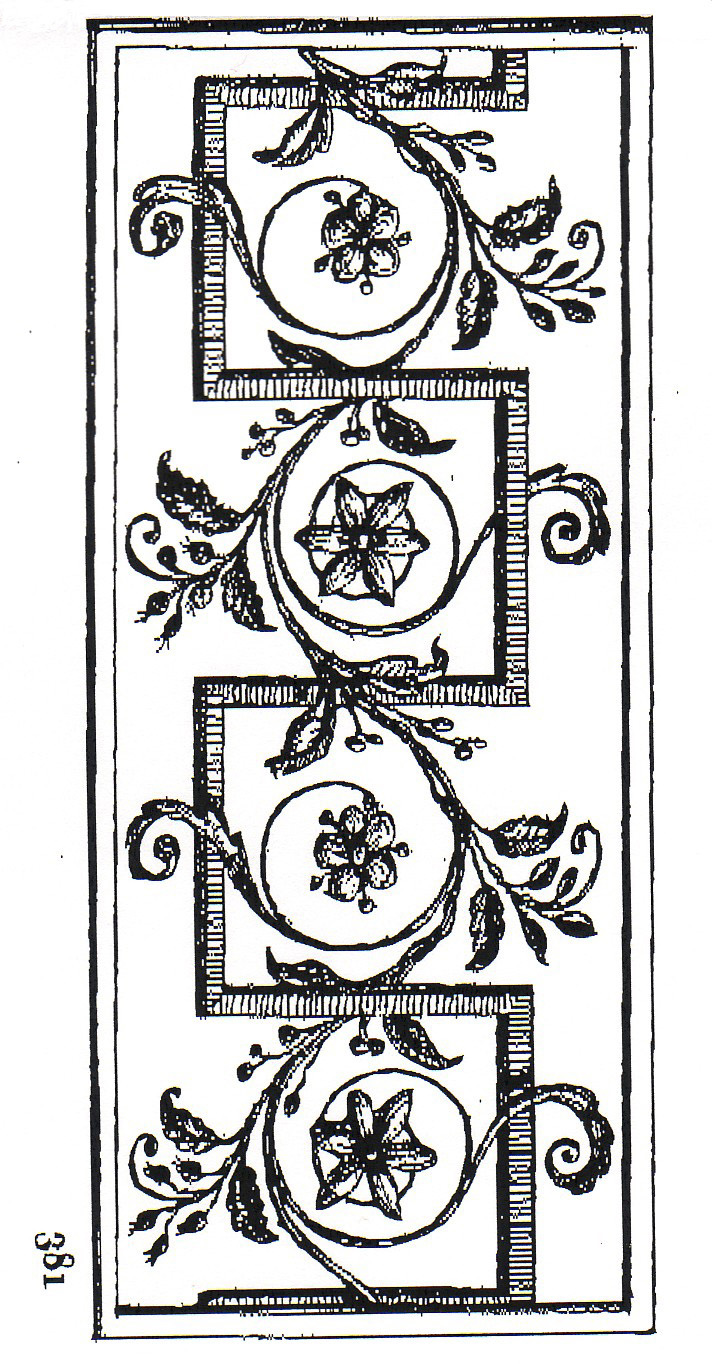 The curtain trim was created by Penn & Fletcher, a New York-based workshop known for hand embroidery as well as their work on theater costumes and haute couture. The design is a combination of a green fabric applique border with embroidered flowers and vines intertwined.

The octagonal dining room is located on the other side of the drawing room. Polygonal plans almost always result in interesting decoration and here, the scale of the space is enhanced by a pair of large antique mirrors on the end walls. The chandelier is fitted with hurricane shades and real candles. In an oblique acknowledgment of the house’s nautical location, a boat wench was adapted to raise and lower the fixture to light it. The dining room has sophisticated details such as William Morris wallpaper but feels relaxed when combined with bamboo shades rather than curtains. 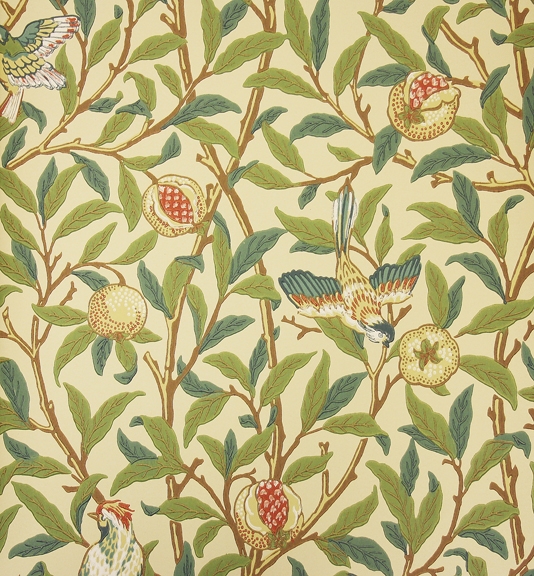 The Morris wallpaper is called “Birds and Pomegranates” and dates from 1926. It was one of the last block printed wallpapers designed by Morris & Co., and is now printed by machine. The design is lush and complex, but lighthearted, too, which is why is suits the room.

Capping these rooms is a tower room. Rising above the ridges of the roof, it possesses long views of the ocean, beach, and bay from all sides—a rare space with 360-degree views. Framing the windows are shades hand-stenciled with a Greek key design by artisan Lucretia Moroni. 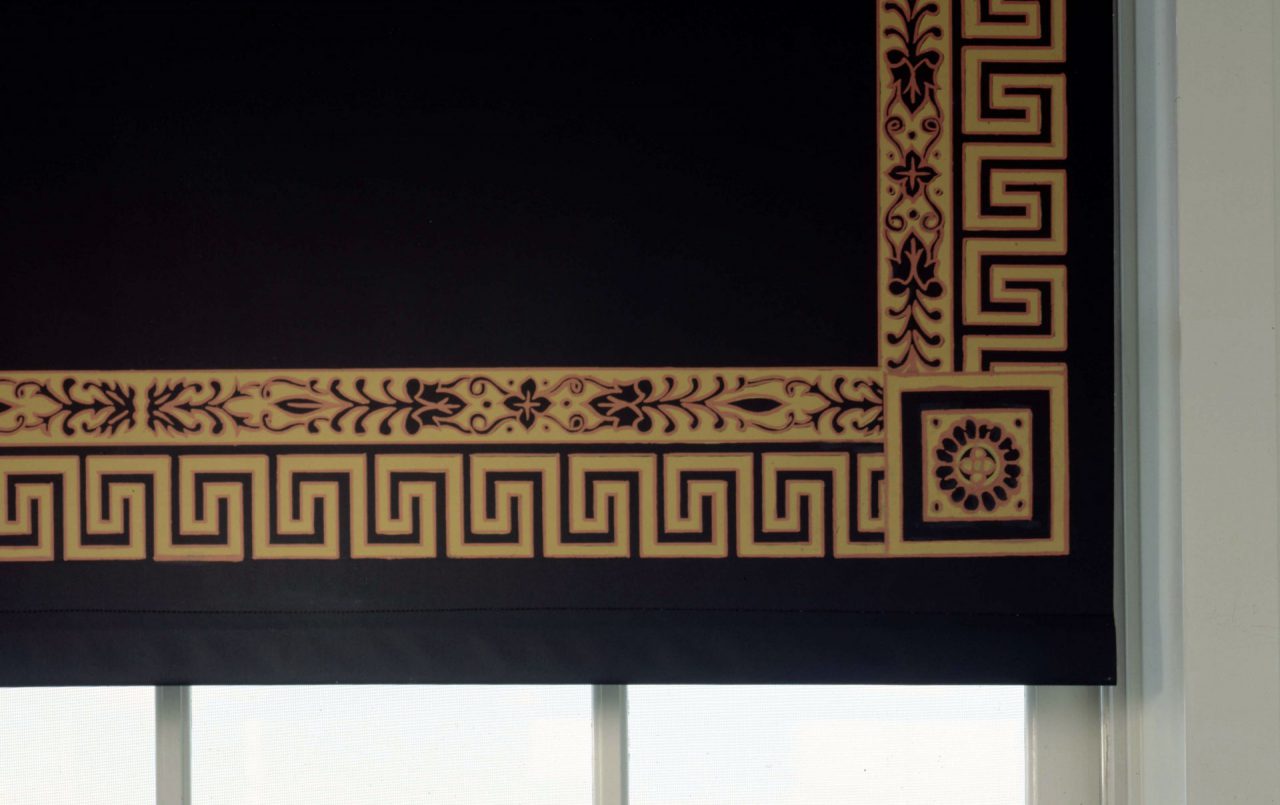 Lucretia’s border patterns is based on 19th century patterns and have an undertone of pink that make the gold elements more pronounced.

A subtle color scheme is used throughout the house, beginning in the entry hall, where a delicate shade of green is combined with gray baseboards.

The library is painted to resemble antique pine. The low table is 18th century and the upholstery is composed of a mixture of solid and patterned linens.