At the first meeting for this project, Thomas Jayne offered the concept that within this relatively small two-bedroom apartment on the Upper West Side of Manhattan, each room would have a distinct theme and personality, much like the rooms found in grand historic houses. He suggested that the living room feature boldly painted walls based on a pattern for an 18th-century English dress silk, the second bedroom be turned into a library in the Egyptian Revival taste, and the bedroom be hung with Chinese wallpaper with views of villages. The dining room would be draped to resemble a tent, and the two connecting halls would be covered in aubergine silk.

All of this, of course, ran counter to the accepted wisdom that in smaller spaces it is best to keep things neutral and free of large patterns, but the client was game. Now this apartment has been enriched to the point that it looks much larger than it is, suggesting that painting everything neutral colors and eliminating pattern might, in fact, make places look smaller. 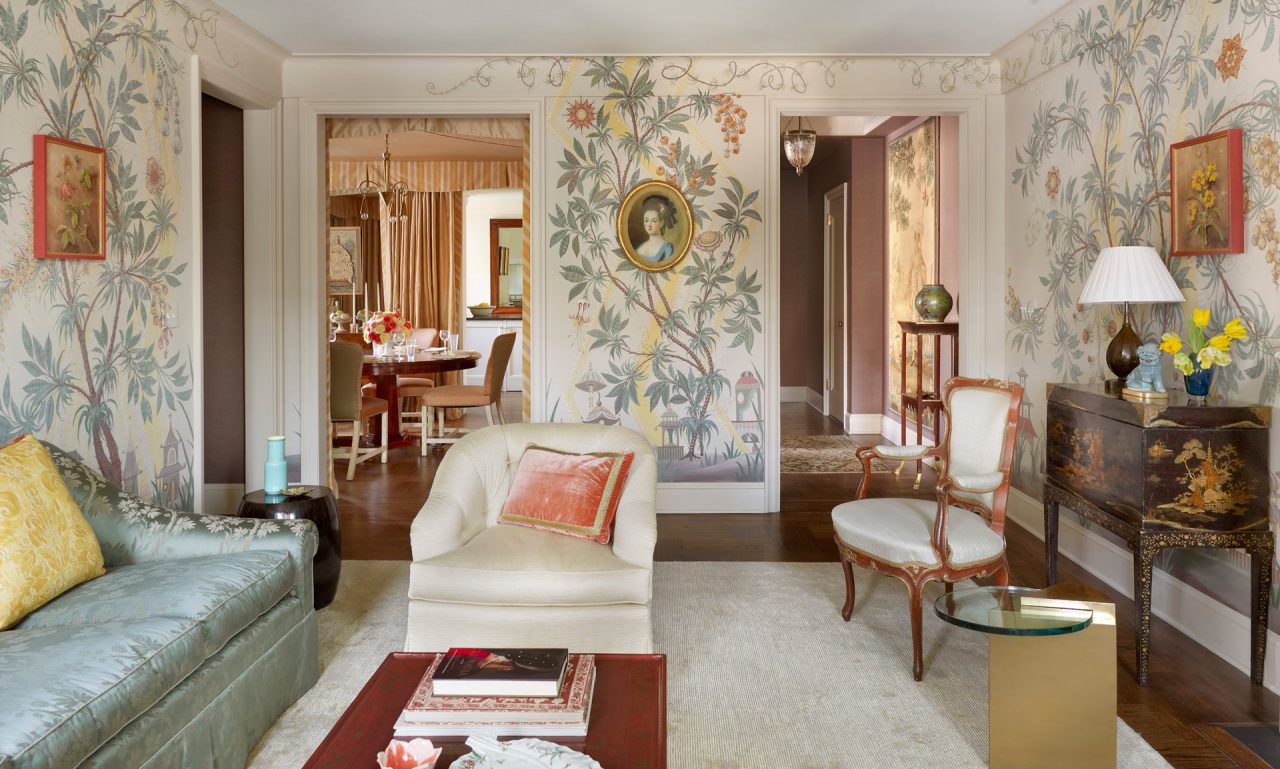 The living room walls are covered in canvas painted by Anne Harris, based on 1707 designs for English dress silk by James Lehman. The pattern is visually balanced by the weight of a Venetian fireplace and the frames of the paintings, especially a fanciful portrait reputedly of Marie Antoinette, and a series of abstract flowers, also by Anne Harris.

A custom arcaded window wall, which includes mirrored panels, was built around the original arched windows in order to accommodate curtains and window shades. 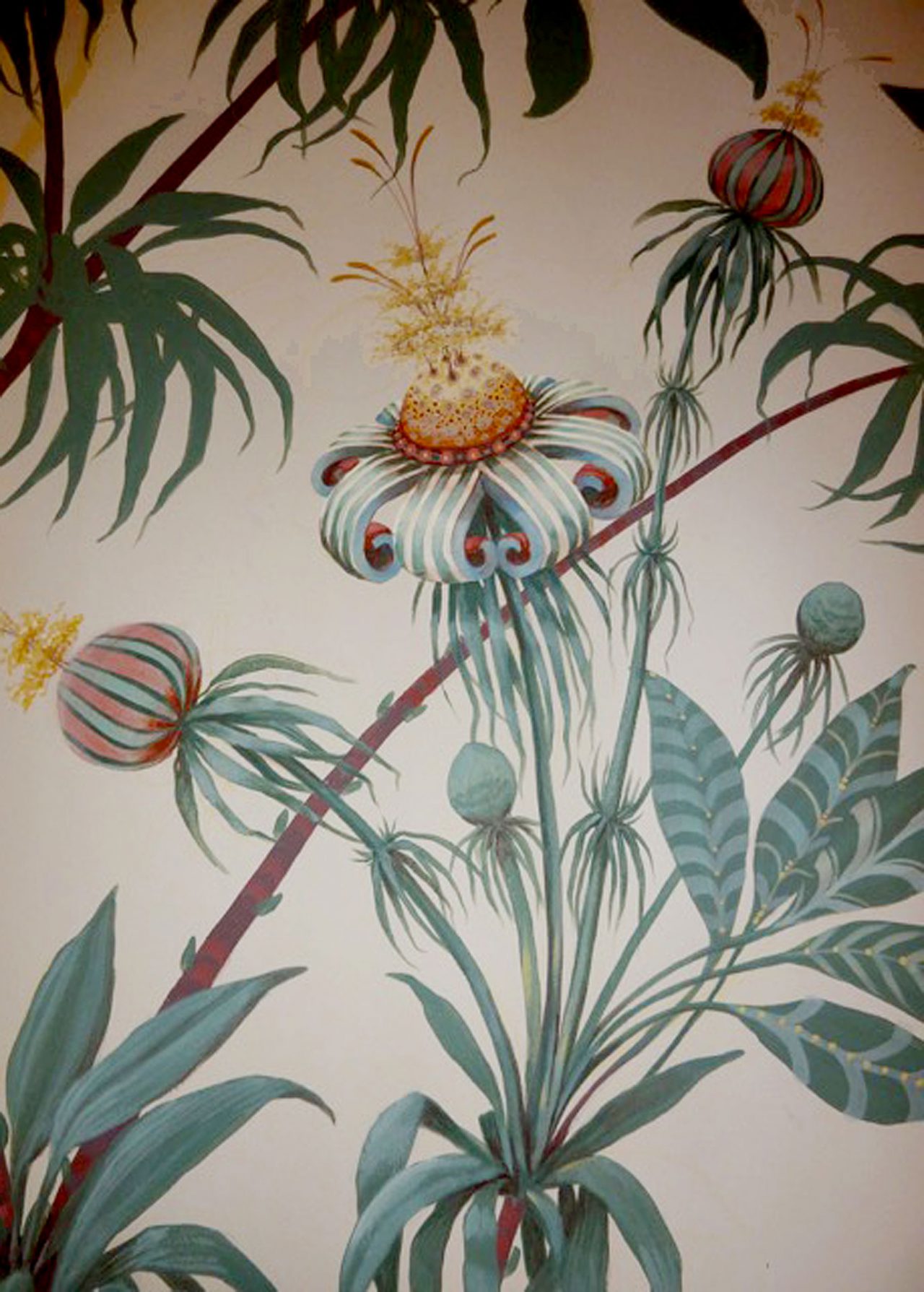 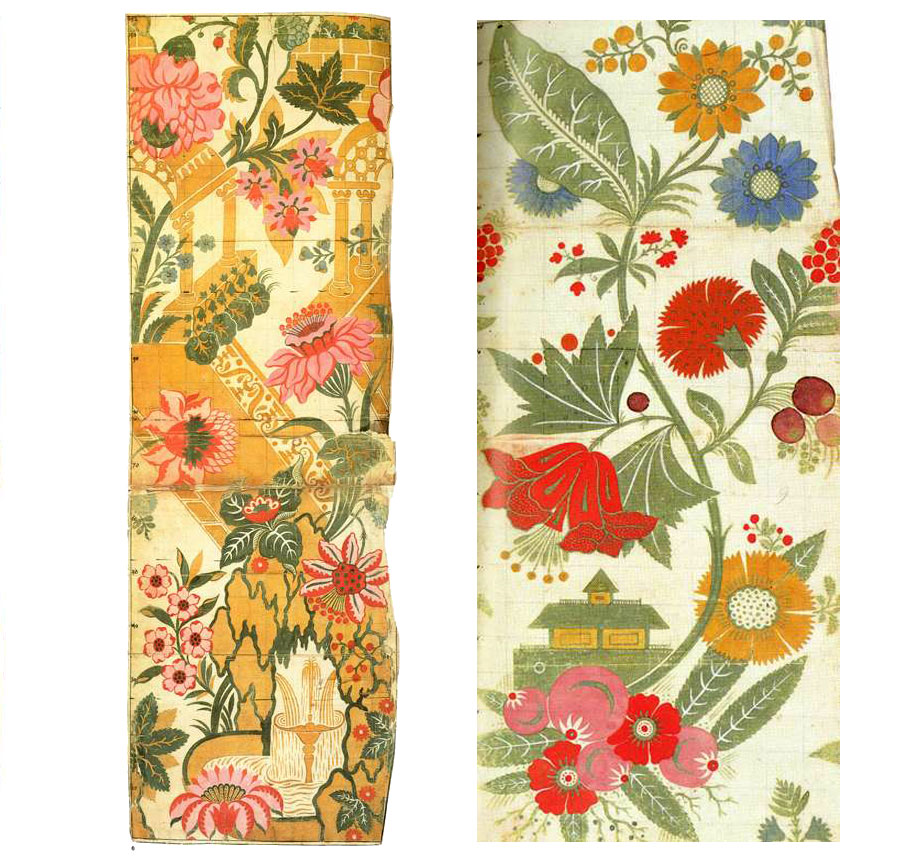 Pieces of the English dress silk patterns that inspired the mural are shown above and a close up of Anne Harris’ mural, left, reveals some of the fine detail of the designs. The imaginary flowers and plants are fanciful creations that expand upon the document textile patterns. 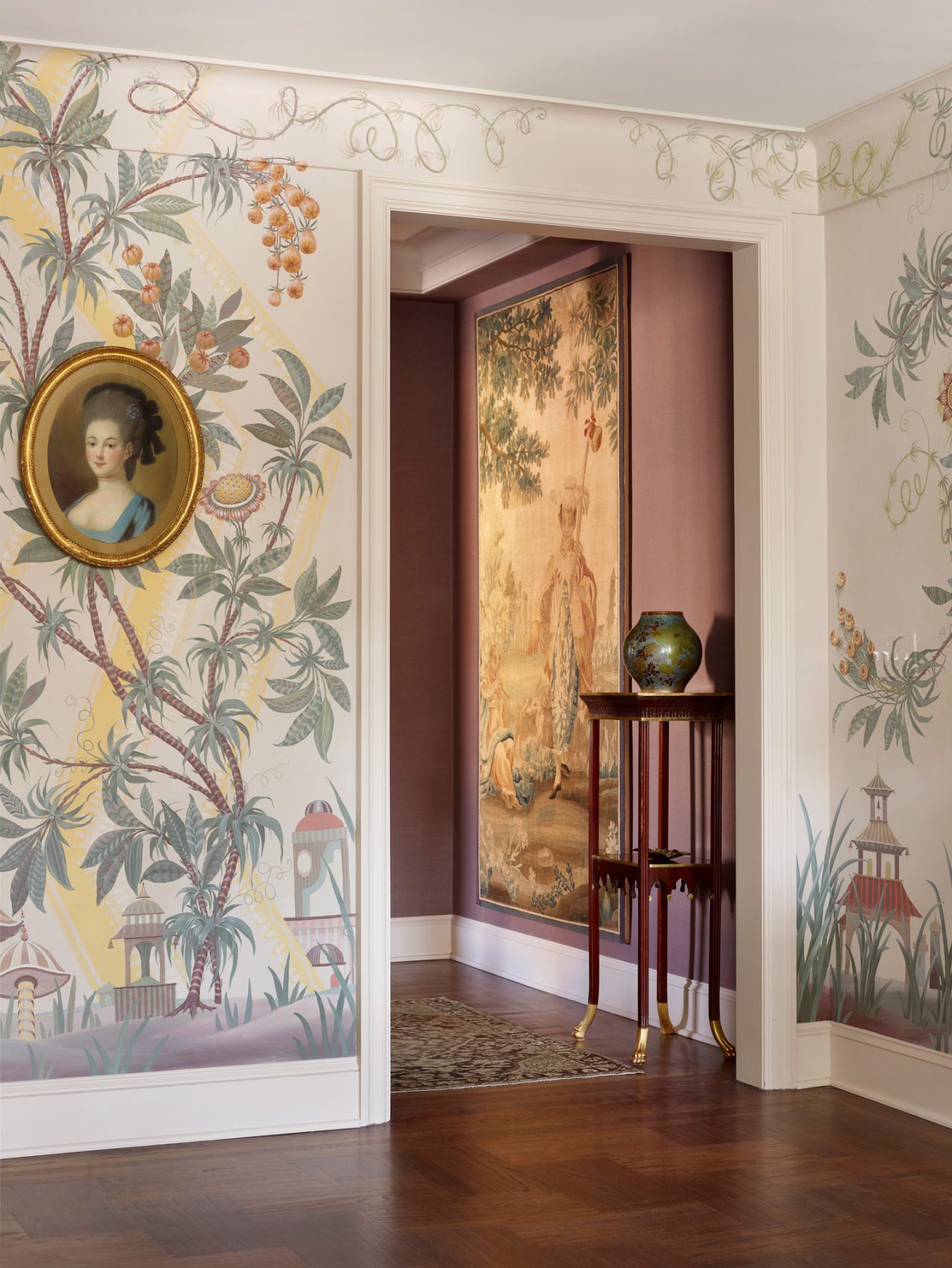 Openings were reorganized to frame views between rooms and doorways were enlarged and heightened, a divergence from the original prewar architecture of the apartment.

The front hall, living room, and kitchen all open into the dining room, which is at the center of the apartment. The room has been tented in order to balance the four asymmetric doorways and to eliminate the awkwardness of multiple doors.

The square dining room is centered with a round table with an unusual art deco brass chandelier hanging above. 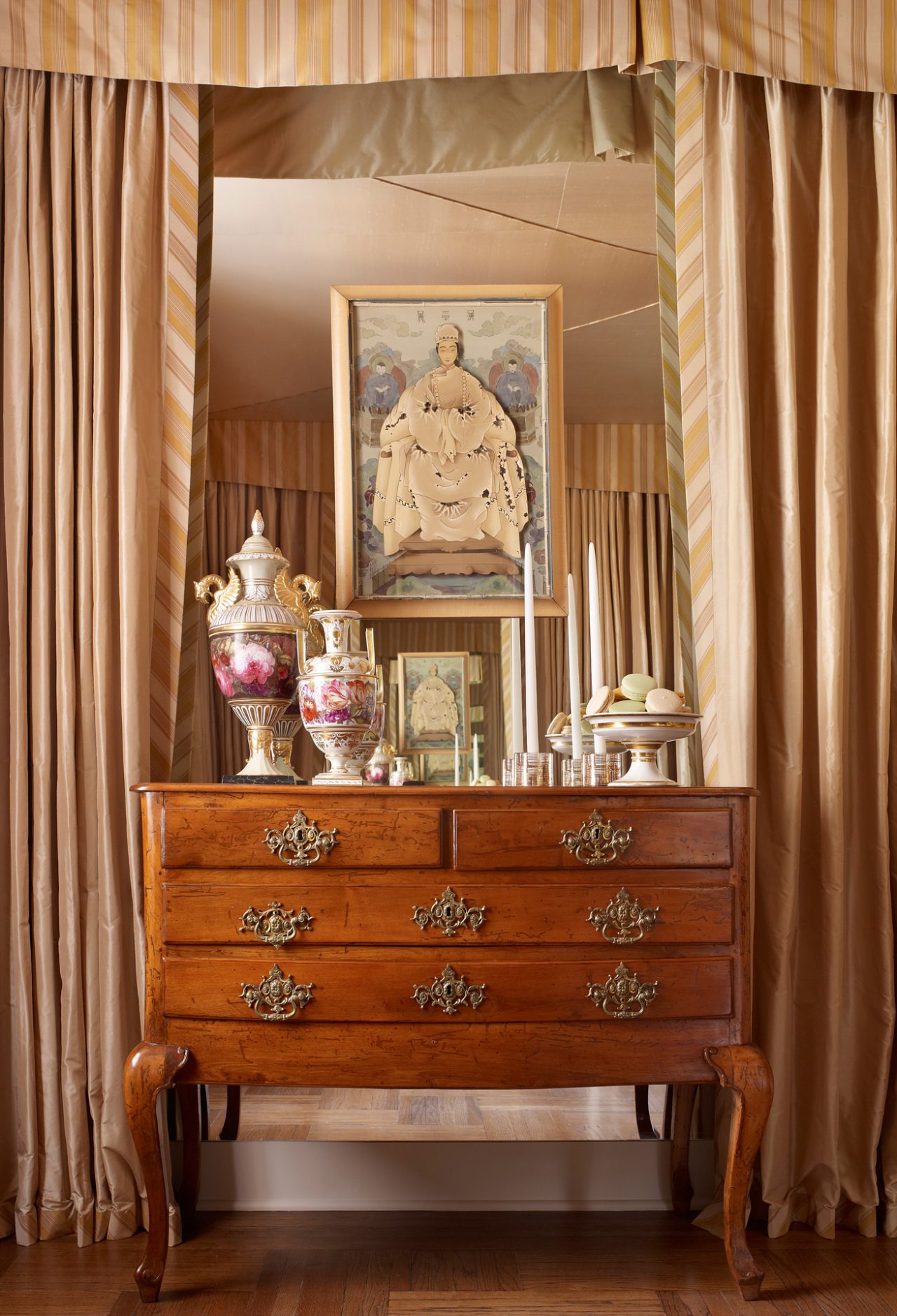 In the dining room, a Dutch buffet displays 19th-century English porcelain. A verre églomisé chinoiserie panel by James Mont, one of a pair, hangs above.

The second bedroom was transformed into a library, but retains functionality with a sofa bed for guests. The room also displays part of the client’s extensive collection of portraits.

Two Egyptian-style bookcases with cavetto cornices and inlaid with the eyes of Horus, a symbol of protection, royal power, and good health, are the signature elements of the library, along with a collection of archaeological artifacts. The portrait above the television is by artist Marianne Barcelona.

The bedroom is densely patterned, with Chinese wallpaper commissioned for the room from Gracie. The furnishing fabrics are intentionally quiet to combine with the paper and give the room a calm nature. 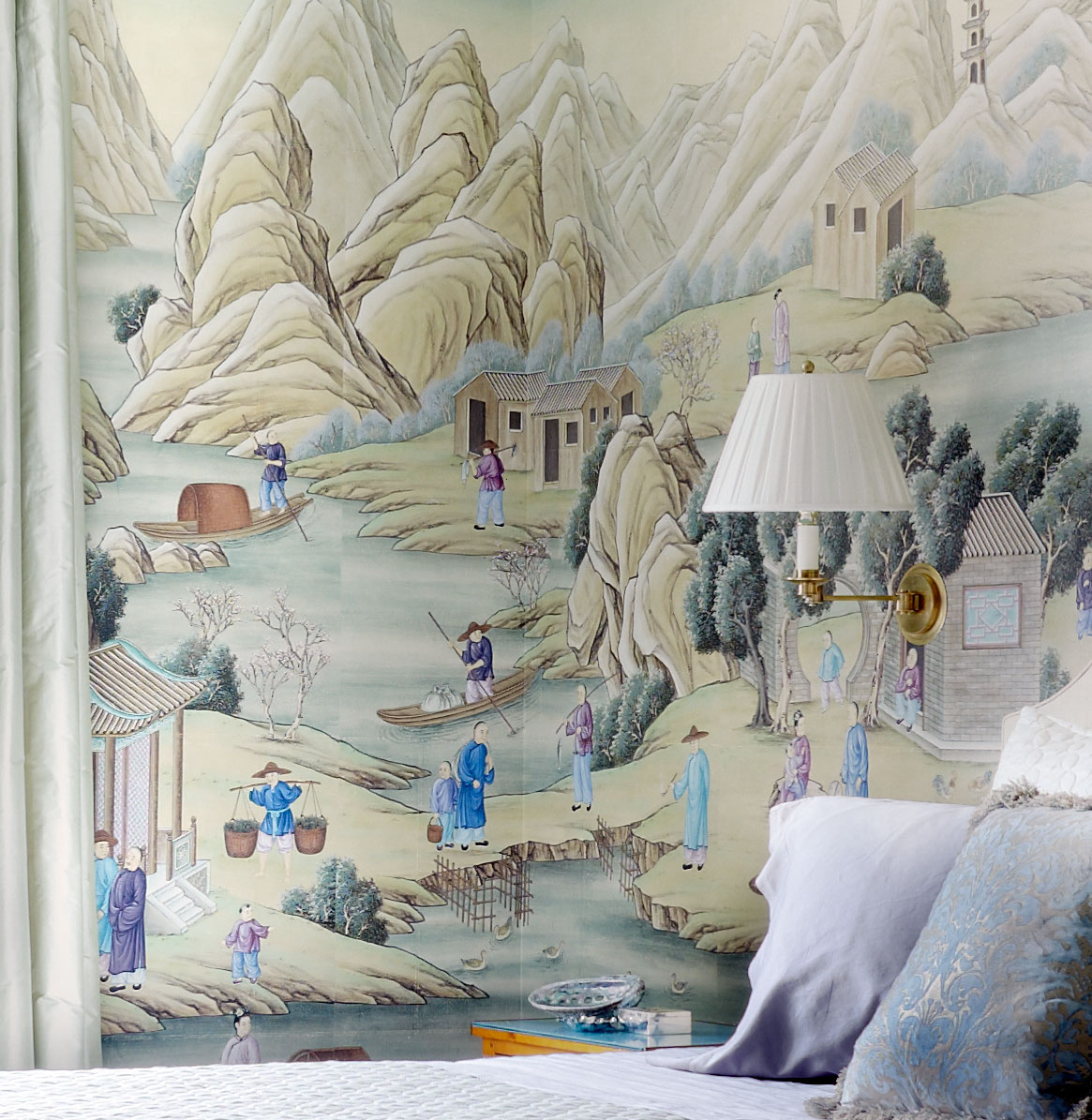 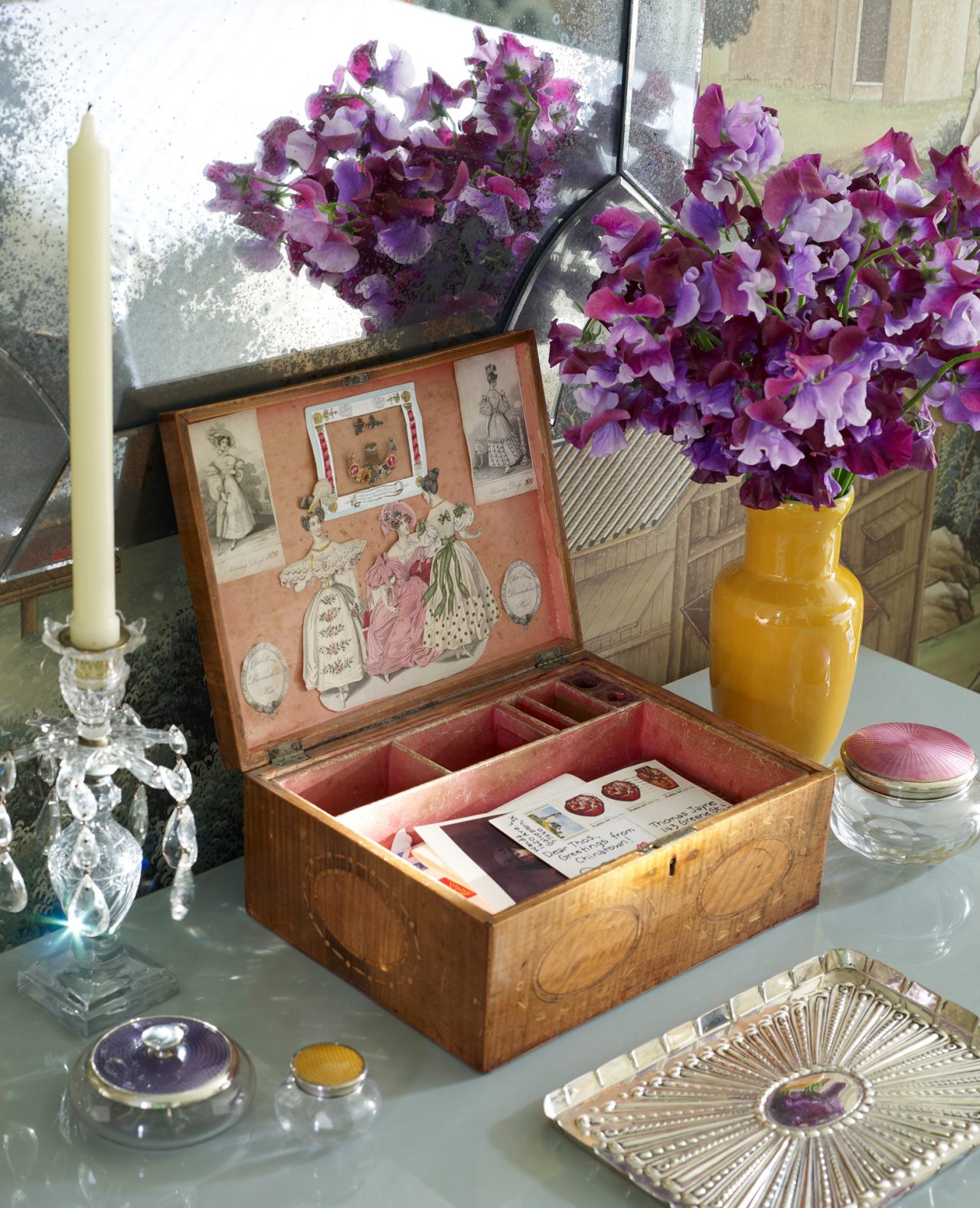 The mural showing a Chinese rural village was hand painted by Gracie’s artists. The dressing table features an antique box which opens to reveal a lovely collage of ladies in fine dress. Our client stashes ephemera and favorite pieces of correspondence inside for safe keeping.

A custom midcentury modern-style vanity and a 1940s mirror contrast with the 18th-century-style wallpaper.