Collectors are always rethinking and recalibrating their homes. This house, located in Westchester County, New York, belongs to a client who has one of the foremost collections of American furniture and decorative arts, as well as early Indian and Himalayan sculpture–so there is much to balance here. Furthermore, adding complexity to the design of the house, our clients want to live with their collections in a domestic setting. 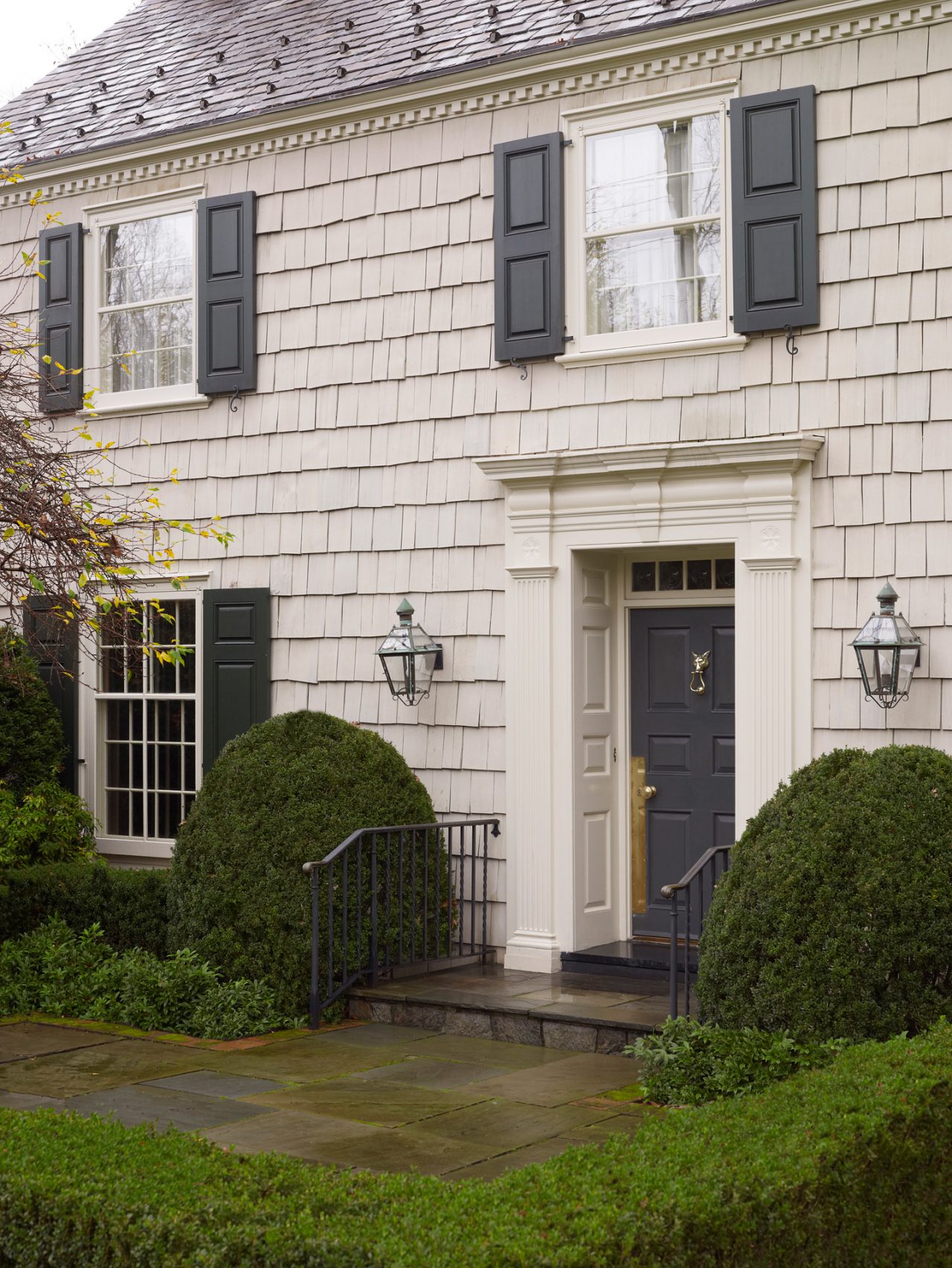 Richard Cameron, then working at Ferguson & Shamamian Architects, designed an addition to this family home—a 1930s Colonial—to create more space for the collections. The new wing, designed more in the Federal taste, suggests the conceit of a later addition to a Colonial house, where the use of neoclassical elements such as an interior window and skylights would not be out of place.

Along with period architecture, our decoration of the house referenced traditional decorative elements found in early America, including the use of wallpaper, painted floor cloths, 18th- and 19th-century upholstery forms, and historic fabrics and carpets. Given the breadth of the American objects, which range from high-style furniture to folk art material, there is no attempt to re-create historically correct period rooms. Rather, the interest is in making visual connections between the layers of material culture of 18th-century America, as well as Indian and Asian arts. 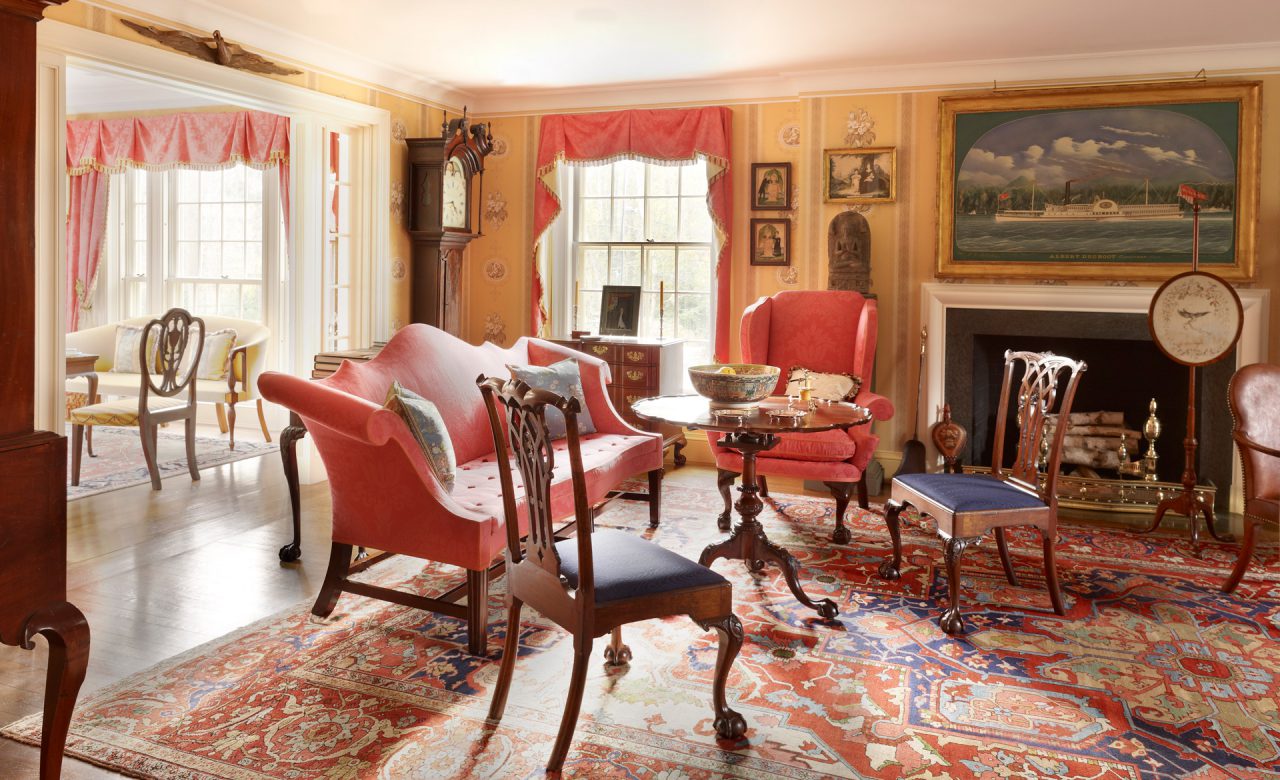 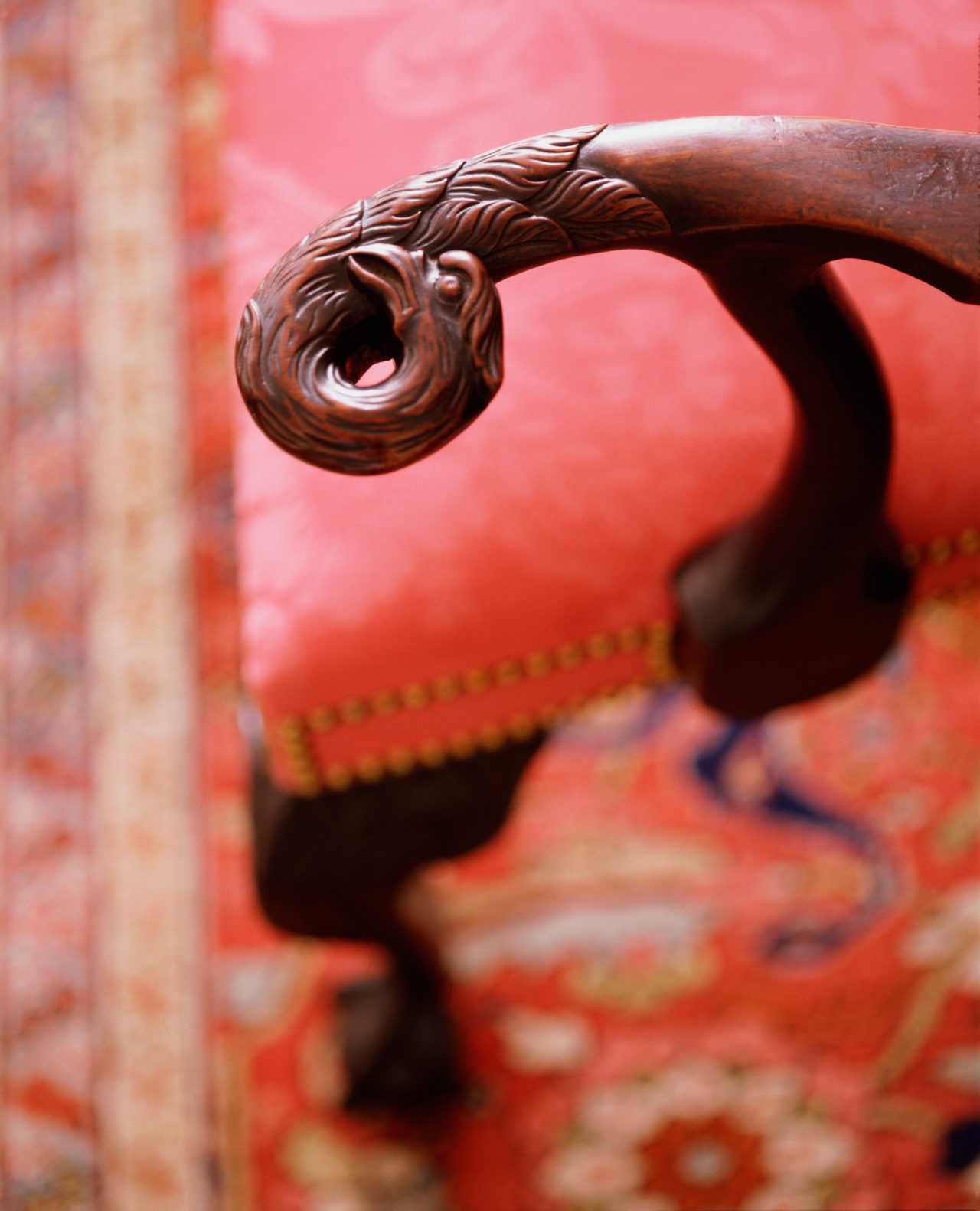 The intricately carved armchair in the living room is a prime example of the Rococo style in American furniture.

The living room features some of the best objects, including a remarkable Chippendale sofa with a distinctive double-peaked camel back from the mid-18th century. Here, the curtains and the upholstery are largely made from the same material—a pink wool damask. They are en suite, as it was often recommended in 18th-century England and America that all the soft furnishings match. In this room, the use of this custom helps connect the wide range of furniture forms in a relatively small space. 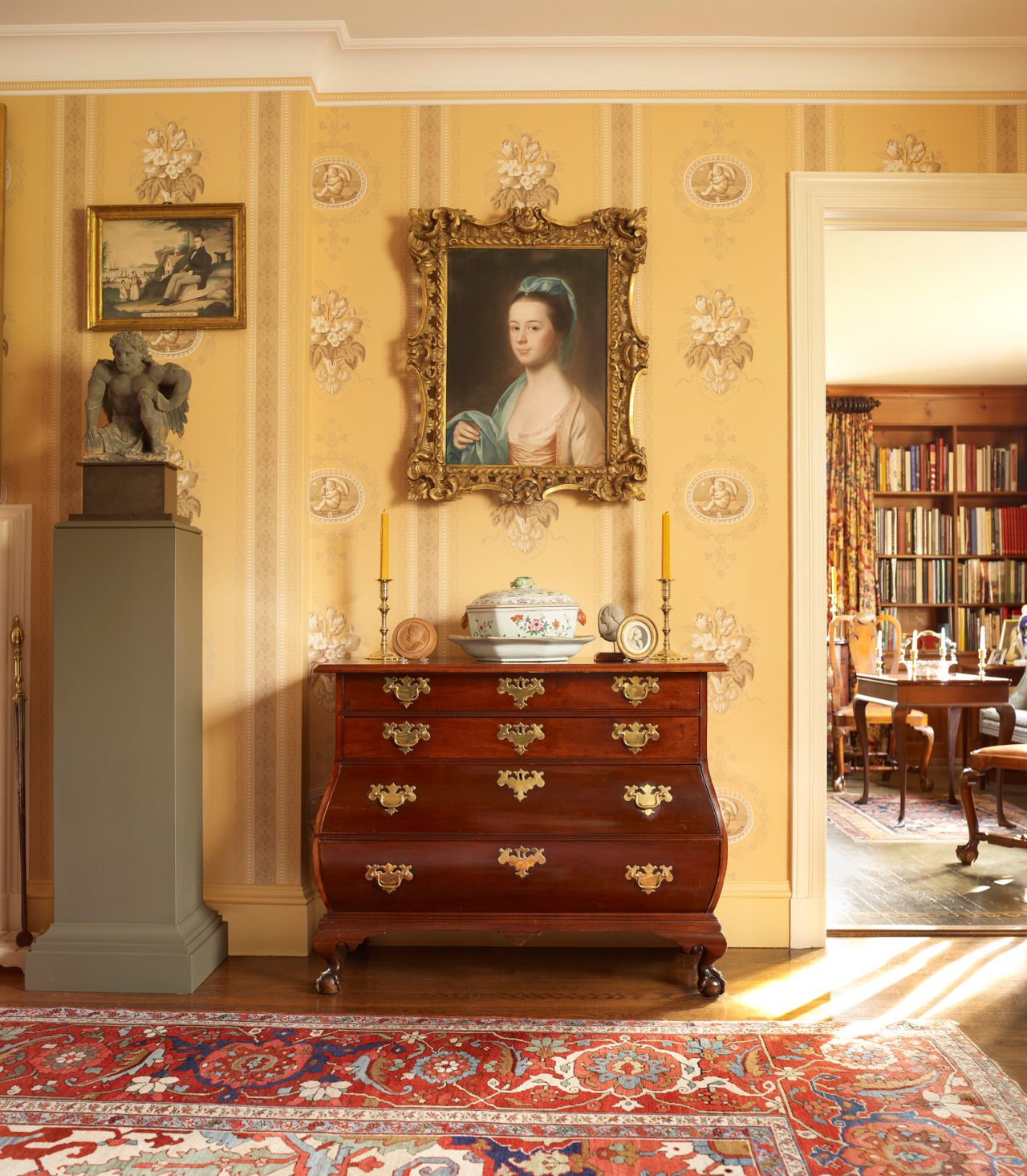 A corner of the living room features a c.1770 Bombay chest and an early pastel portrait by John Singleton Copley. The active patterns of the Heriz carpet and wallpapers serve to unify all the elements. The Heriz carpet is a type long favored by collectors for its strong design, which complements early American furniture.

A sitting room adjacent to the living room has curtains and an upholstered wing chair made of the same pink fabric. The walls are covered in a chinoiserie pattern that connects with the client’s collecting interest in China trade paintings and Chinese export porcelain. 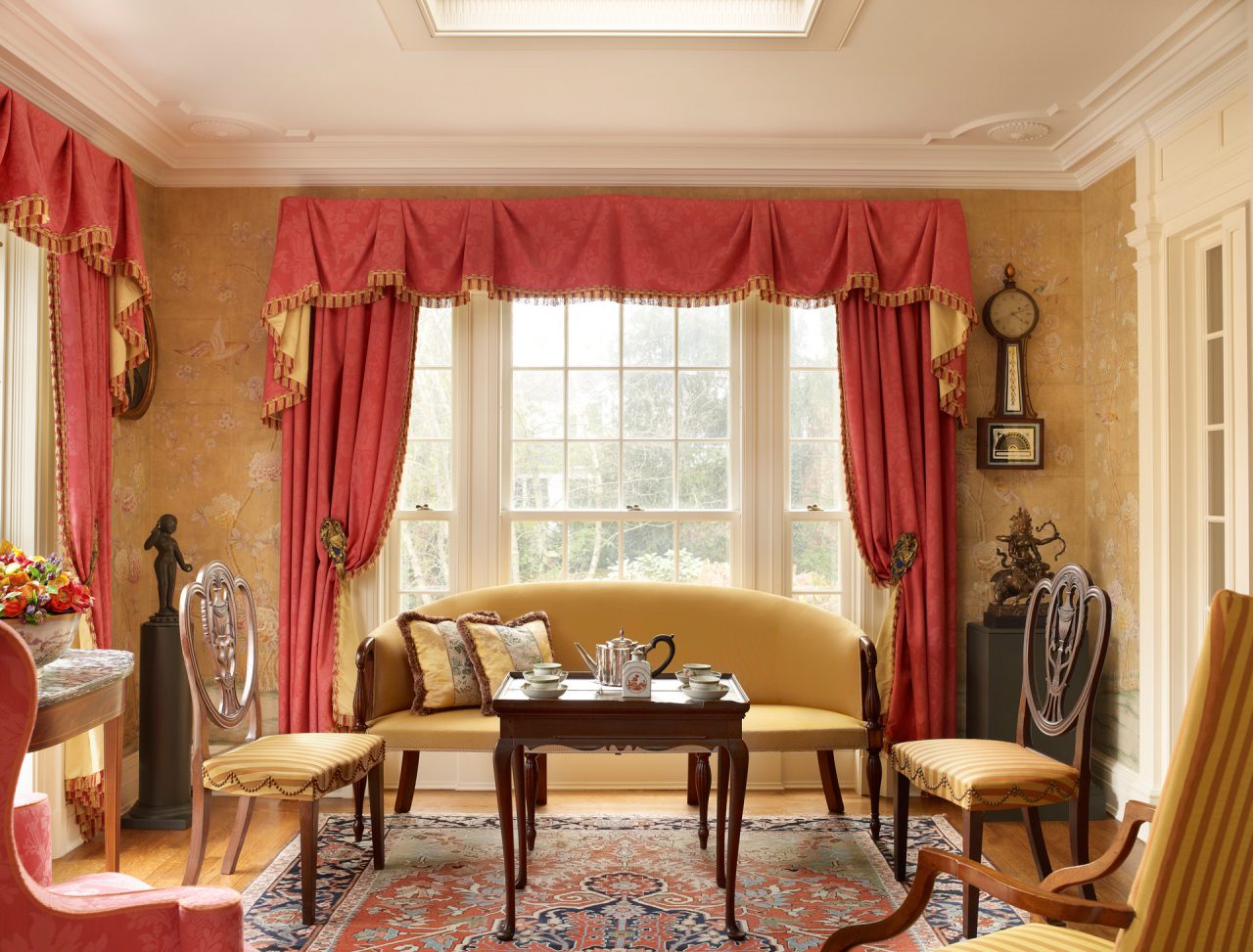 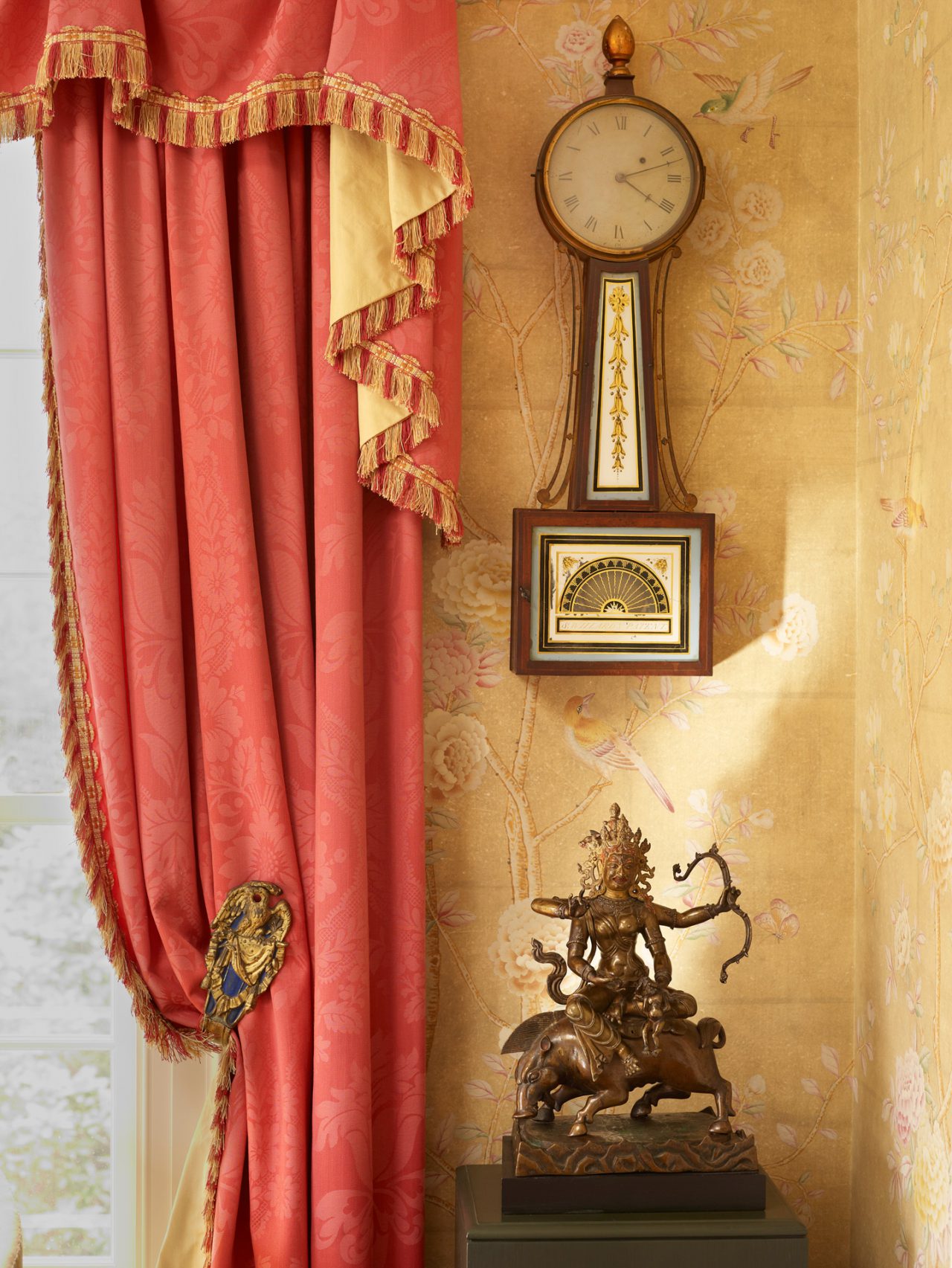 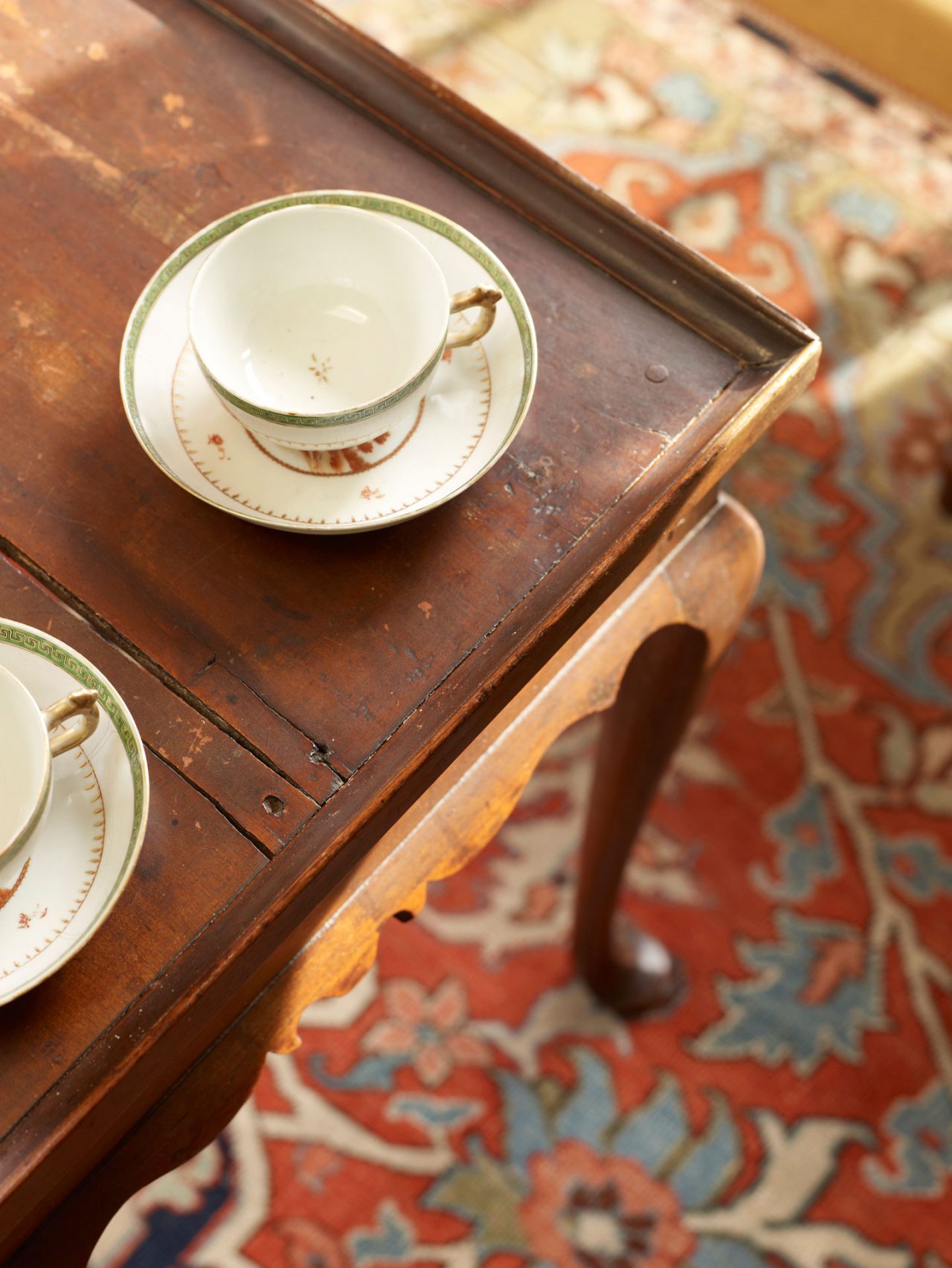 A corner of the sitting room is a rich mixture of textures and objects. It is decorated with an Indian sculpture, antique clock, and finely detailed curtains. The surface of the low table has a pleasing patina of age.

The complex decoration of this house is illustrated by the view from the living room through the hall into the dining room, which shows the three distinct wallpapers used in these rooms. The dining room (also shown at top) is decorated with a specially commissioned reproduction of a wallpaper used at the 18th-century Wheeler House in Concord, Massachusetts. 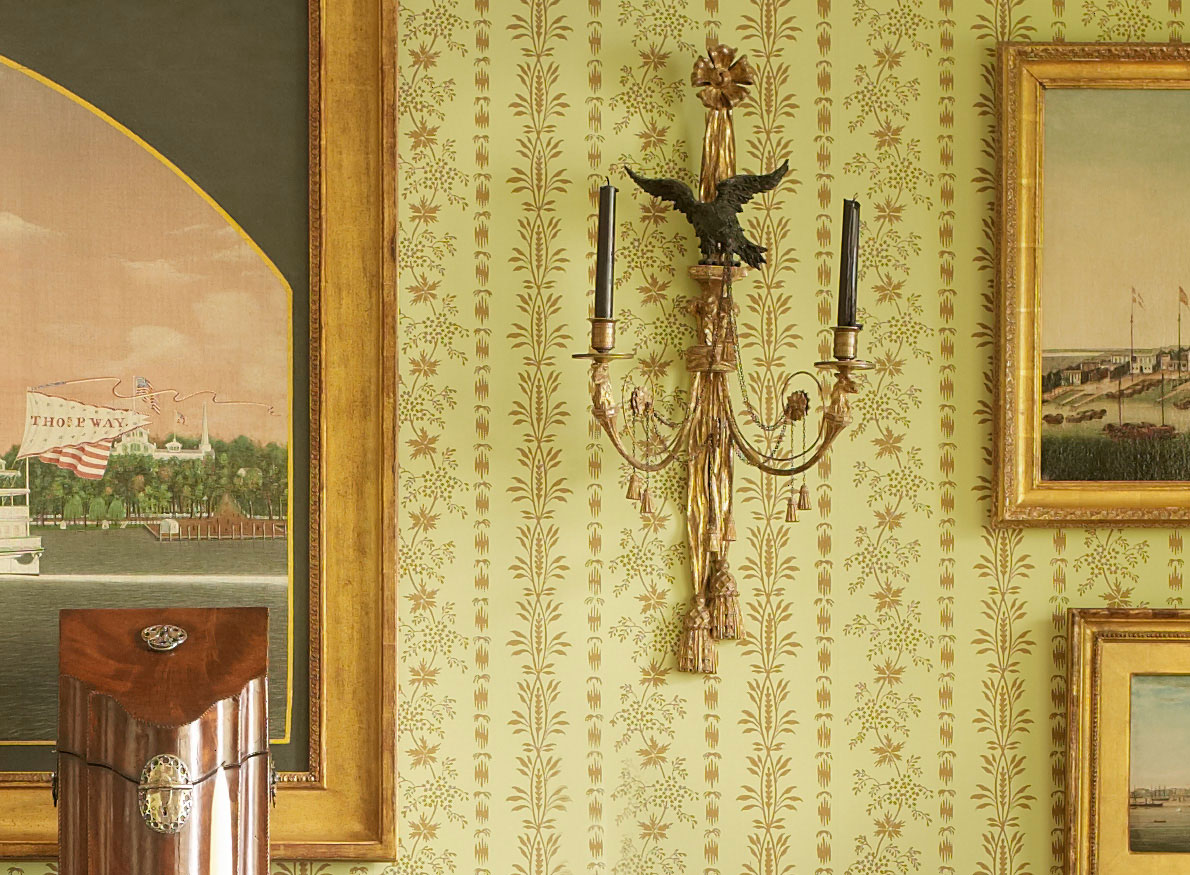 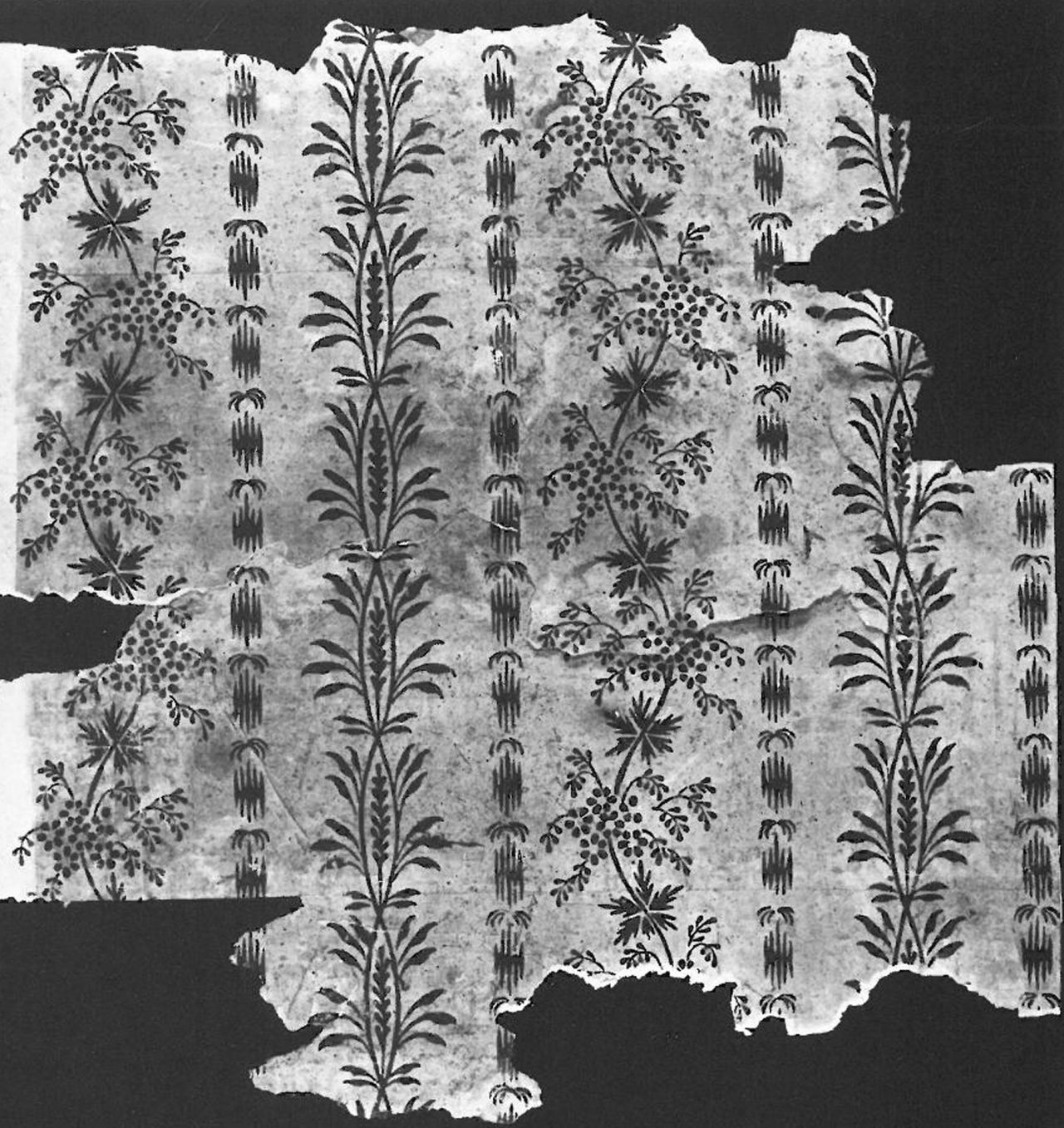 The reproduction wallpaper in the dining room was commissioned for this house through Adelphi Paper Hangings. Adelphi carefully documented the design on site at the Wheeler House and then created the hand carved blocks to print the design.

The other principal room is an informal sitting room, which is furnished with pieces from the earlier William and Mary period, as well as Queen Anne, Chippendale, and Windsor furniture. The room is papered with a large pattern re-created by Adelphi Paper Hangings after the original in the 1752 Webb House in Wethersfield, Connecticut. Large patterns are often difficult to work with, especially in collectors’ houses, where they can distract from the beauty of the treasures inside, but here the bold pattern plays well against the strong silhouettes of the furniture and works of art. 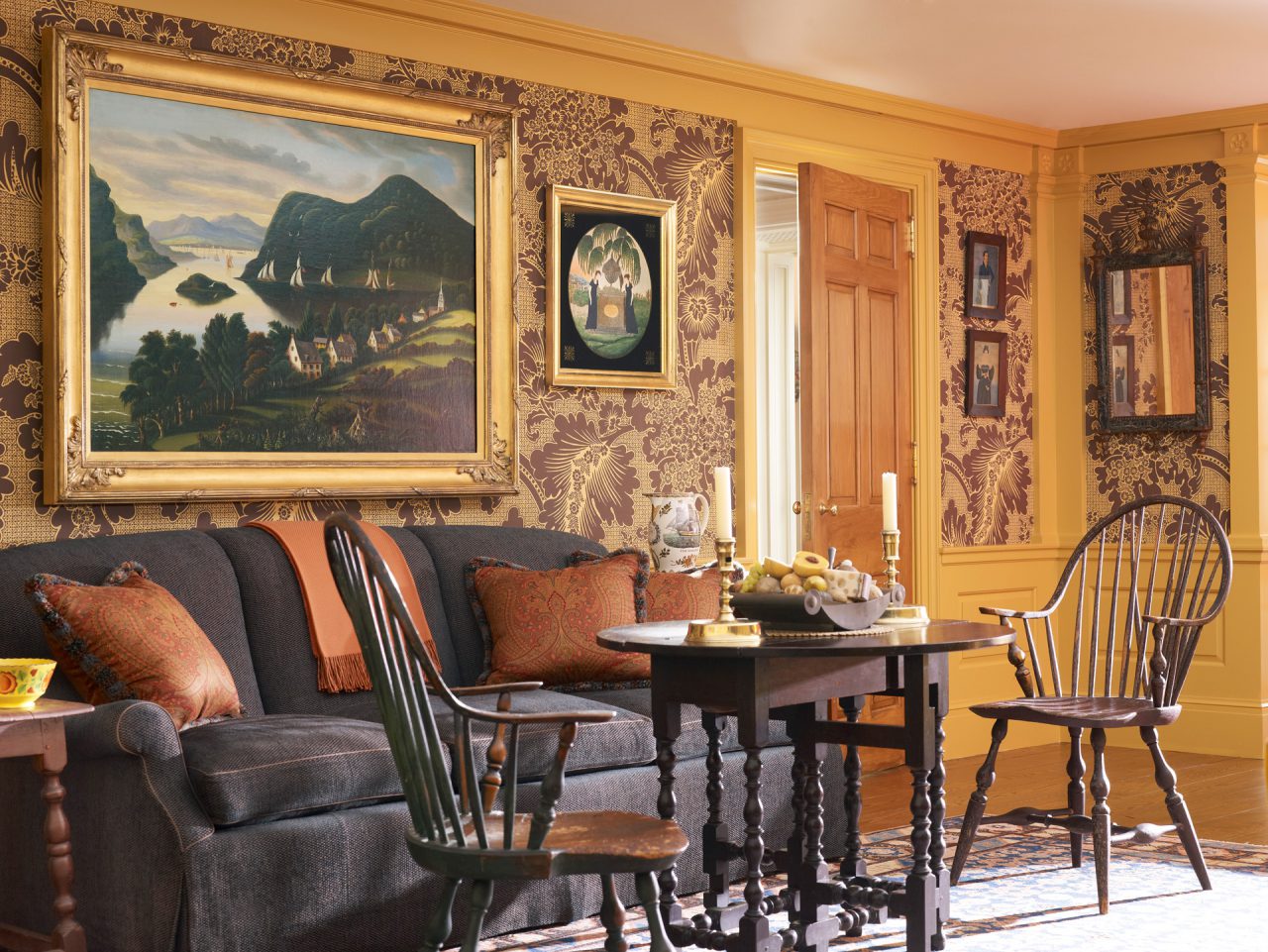 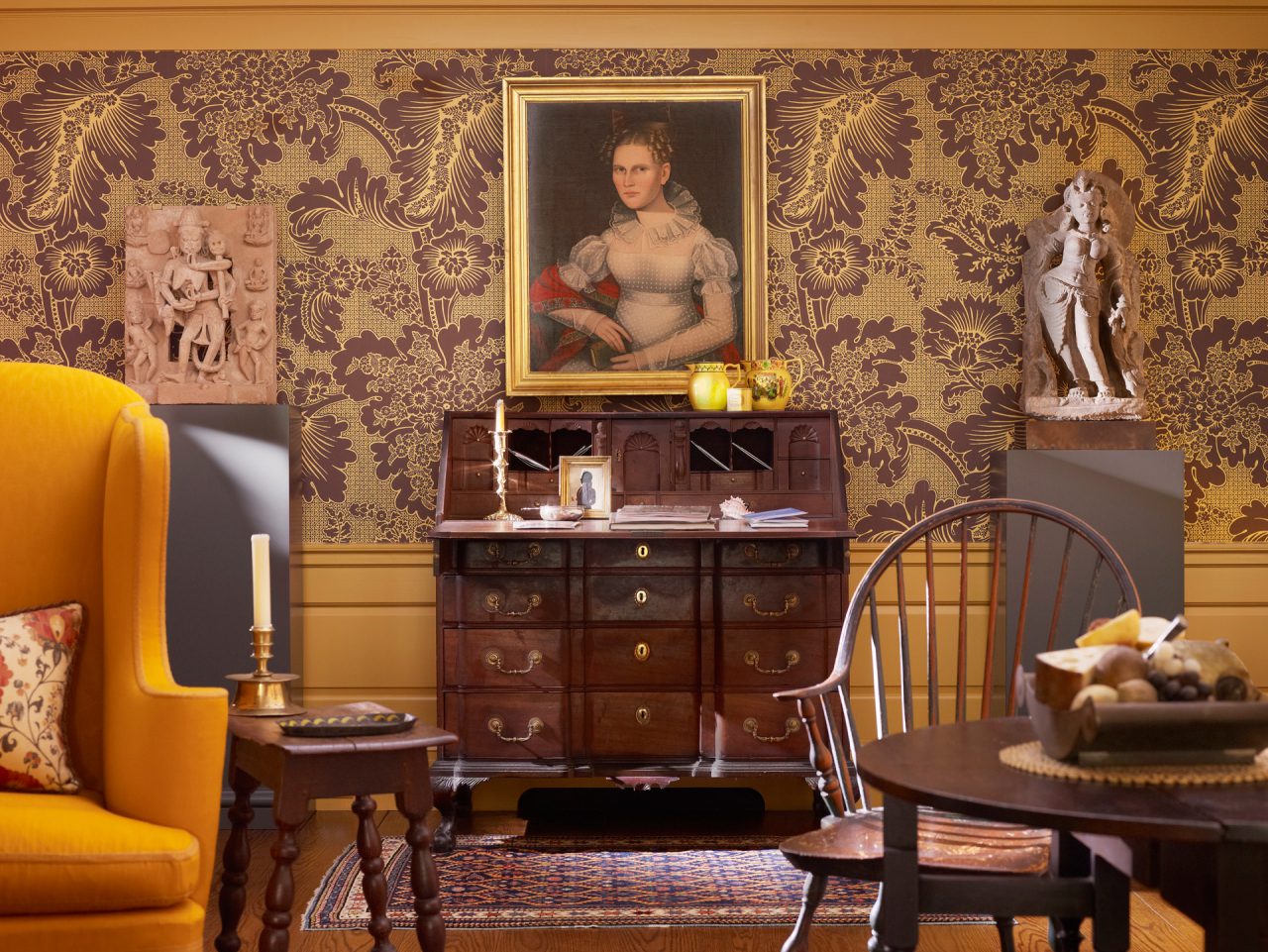 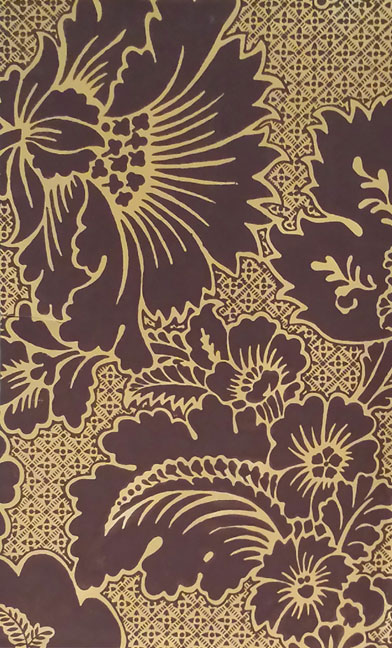 In the breakfast room, the square skylight and display of objects from far flung locations reflect the influence of the Sir John Soane house. These pieces include an Indian temple sculpture, a set of Rhode Island chairs, English silver, and a picture painted in China for the Western market. The floor is laid with a replica floor cloth – canvas heavily painted in a pattern. In the 18th and 19th centuries, these were used as an alternative to bare wood and expensive carpet. 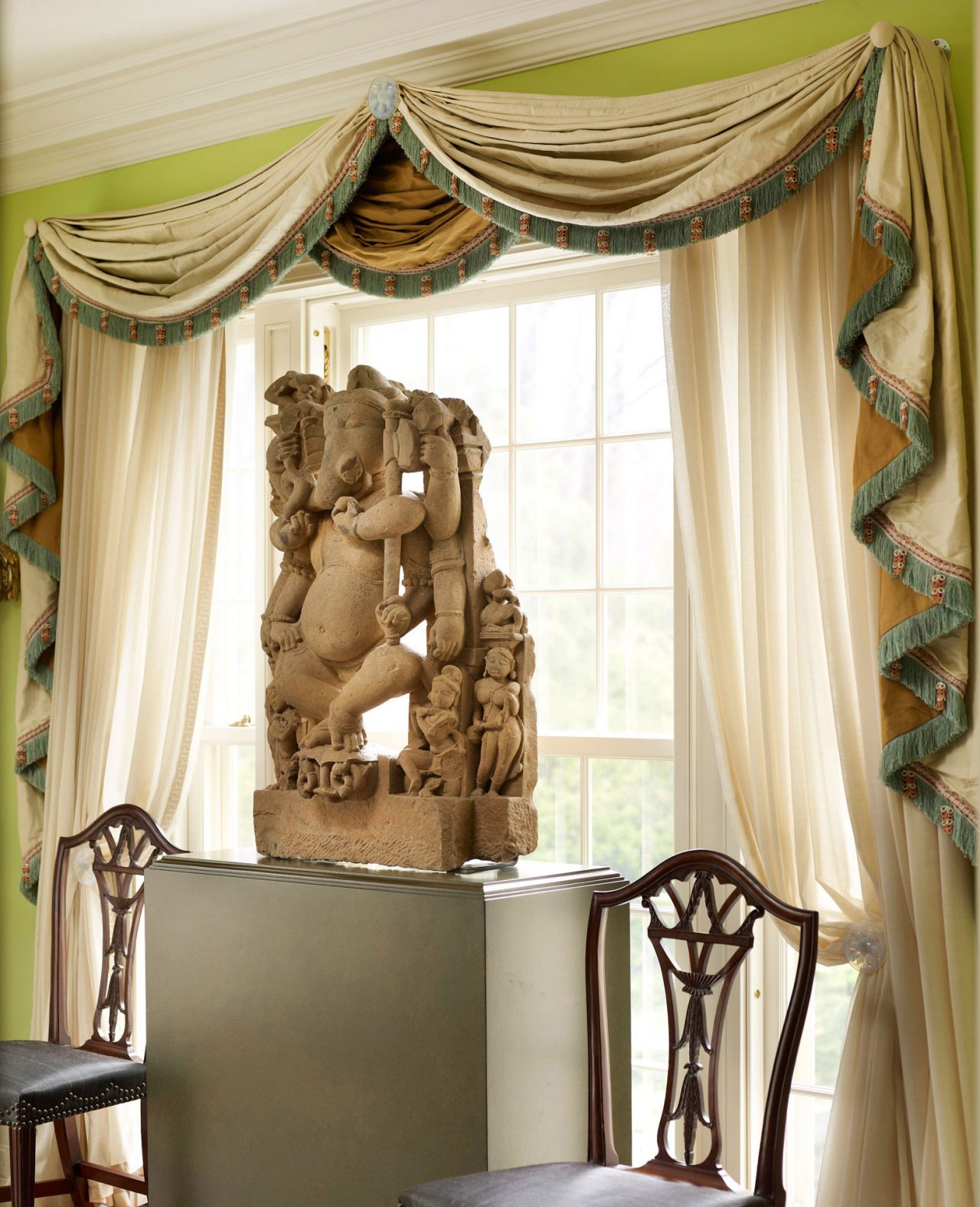 An Indian sculpture is theatrically framed in the window under 18th century style curtains.

The card room, immediately outside the sitting room, features a rag rug with a unique concentric circle pattern. The subtle patterns in the wallpaper and curtains allow this rug and the “fancy painted” furniture to become the principal features of the room.

The library has floors painted to simulate marble by artist Chuck Hettinger and old pine paneling. The wing chair and sofa are antique forms re-covered in damask patterns.

The guest bedroom is furnished with 19th-century textiles, including quilts and hooked rugs. The curtains and bed hangings are patterned after historic models and reminiscent of rooms at the Winterthur Museum. The painted diamond-pattern floor is a counterpoint to the striped walls. 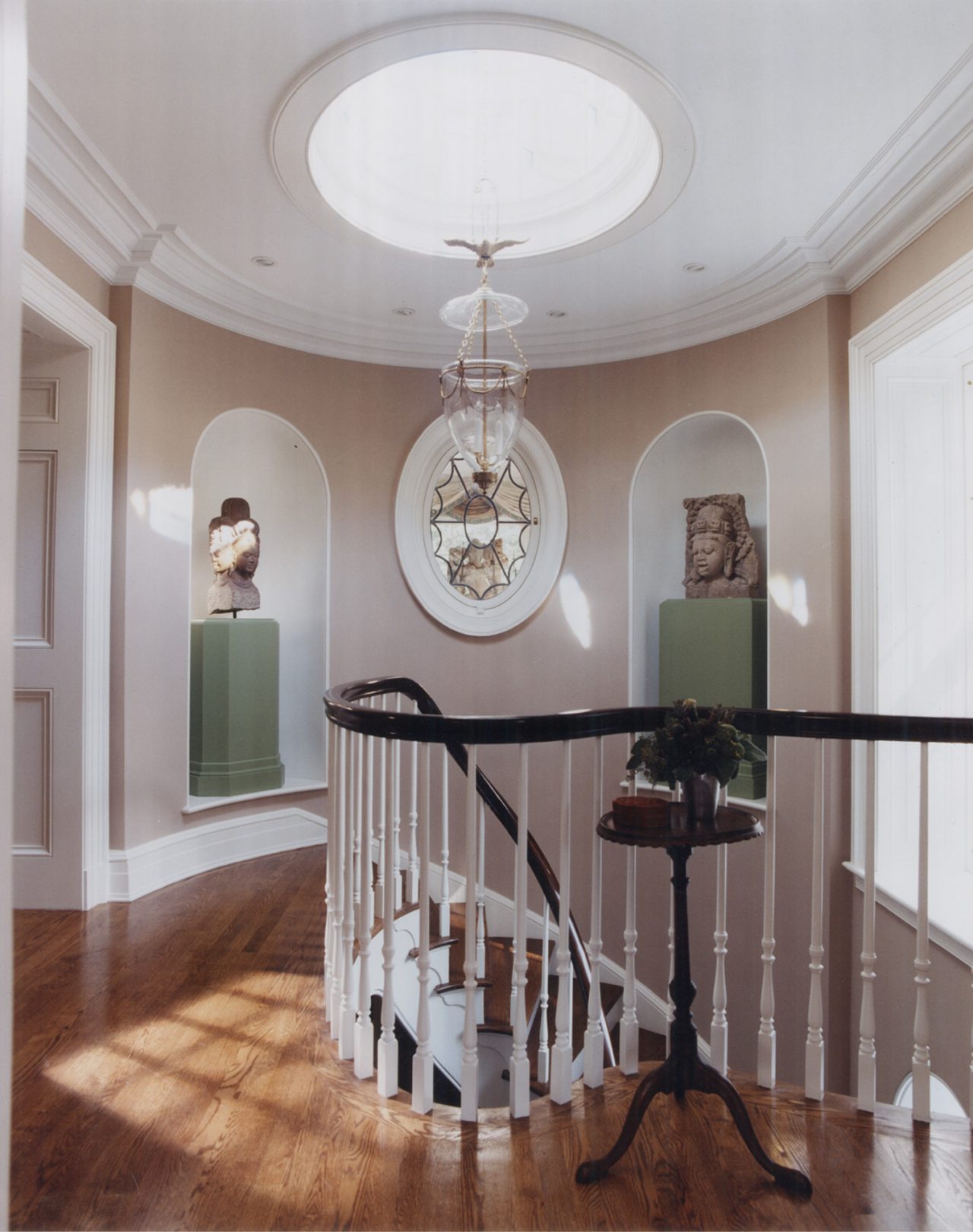 A central stair hall is top-lit by a skylight and has niches for sculpture. The landing serves to unite and bridge the old and new parts of the house.
Menu